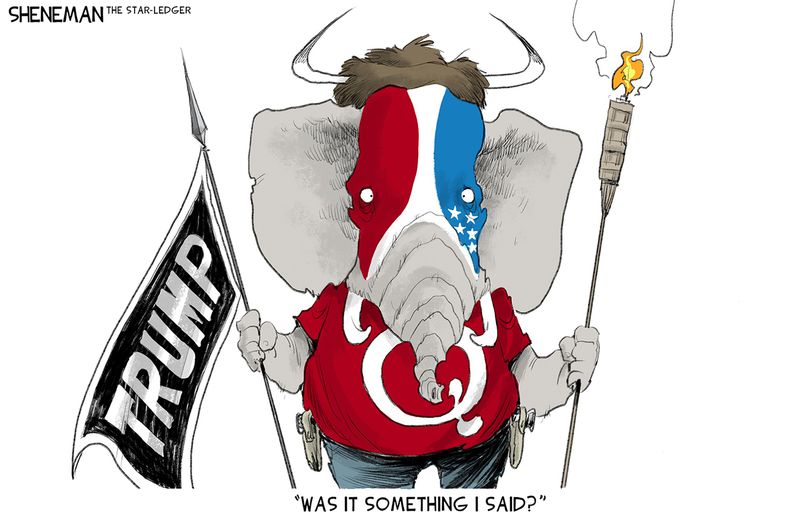 The GOP establishment power brokers have begun to play the blame game as the 2022 election results are showing that their predicted red wave has fizzled. For days, they had been woozy with anticipation, betting on how many GOP MAGA politicians would be replacing Democratic Party elected officials, only to be faced with their worst nightmare. It’s the Dems who’re the ones who are giddy over the election outcomes.

No sooner had the GOP bigwigs/ lawmakers figured out that Dems still had the majority position in the US Senate and that it could take weeks before the majority status in the US House would be determined as there were just too many elections that were too close to call, when the verbal attacks commenced, mostly blaming the tsunami of unexpected losses on the defeated ex-president. Can you believe that even the ex-president’s allies in the right-wing media outlets on FOX News TV, the NY Post, and the Wall Street Journal’s editorial board had their knives out to cut the ex-president to pieces?

Michael Brendan Dougherty of the right-leaning National Review wrote that “all the chatter on my conservative and GOP channels is rage at Trump like I’ve never seen. The one guy he attacked before Election Day was DeSantis — the clear winner, meanwhile, all his guys are s—ing the bed.”

All of them have backed the defeated ex-president for 5 + years, no matter what he did. It’s time for them to take a long look at themselves in the mirror before solely, blaming the ex-president for the 2022 election’s debacle. 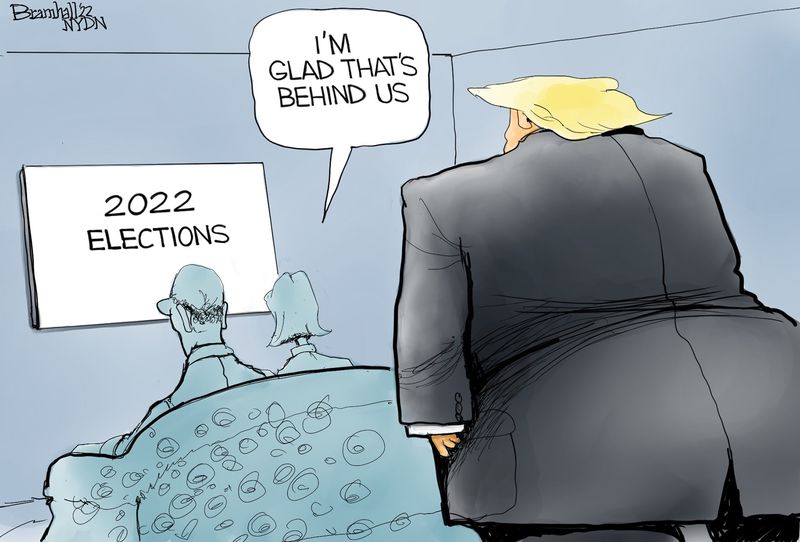 As per a 11/10/2022 Truthout.org report, “Trump Is Blaming Everyone But Himself for Midterm Losses” by Chris Walker:

“Former President Donald Trump is reportedly “fuming” over the midterm results, as at least 14 of his endorsed GOP candidates lost to their Democratic counterparts in elections this week.”

“Sources who were present at Trump’s Mar-a-Lago estate in Palm Beach, Florida, say that the former president was visibly upset by the losses of candidates he endorsed. Trump’s losses coincide with a successful night for his Republican rival, Florida Gov. Ron DeSantis, who cruised to reelection on Tuesday. Gerrymandered districts drawn up by DeSantis’s office also resulted in congressional wins for the party.”

“Some of Trump’s allies have begun to express concerns that they may be backing the wrong person going forward. “This is a sinking ship,” a Trump aide said to ABC News.”

Let’s see how long the GOP bigwigs continue to shun the GOP MAGA defeated ex-president. What happens when they figure out that the ex-president’s ardent MAGA followers won’t continue to vote for Republican Party candidates if they feel that their champion has been dished by the GOP establishment crowd, knowing that Republican Party candidates can’t win without them? Frankly, the majority of GOP MAGAs aren’t likely to be amenable to supporting another hand-picked Trump-like substitute and the ex-president isn’t likely to grant his blessing to this switch and bait strategy.

As per an 11/12/2022 NY Times op-ed piece, “Republican Elites Might Be Done With Trump, but He’s Not Done With Them” by Jamelle Bouie:

“There’s real reason to think that Republican elites could muscle Trump out of his position if they committed to the aggressive, scorched-earth tactics it would take.”

“The idea that Republican elites could simply swap Trump for another candidate without incurring any serious damage rests on two assumptions: First, that Trump’s supporters are more committed to the Republican Party than they are to him, and second, that Trump himself will give up the fight if he isn’t able to win the party’s nomination.”

“I think these assumptions show a fundamental misunderstanding of the world Republican elites brought into being when they finally bent the knee to Trump in the summer and fall of 2016. Trump isn’t simply a popular (with Republicans) politician with an unusually enthusiastic group of supporters. No, he leads a cult of personality, in which he is an almost messianic figure, practically sent by God himself to purge the US of liberals (and other assorted enemies) and restore the nation to greatness. He is practically worshiped by a large and politically influential group of Americans, who describe him as “anointed.”

How long have political observers been pontificating about what it would take for Republican Party lawmakers, right-wing media power brokers, GOP dark money corporate donors to finally hold the defeated ex-president, accountable for his long list of over-the-top transgressions leading to 2 impeachments, multiple investigations based on substantiated wrongdoings, including his incitement of an insurrection on 1/6/2021, and the removal of highly sensitive documents from the White House, etc.? Well, now we know what the answer is, that this might possibly happen after he costs the GOP elites, significant election losses over 3 election cycles.

For a list of the ex-president’s faux pas moments before he stepped one foot into the White House office in 2017, see: The 37 Fatal Gaffes That Didn’t Kill Donald Trump https://www.politico.com/magazine/story.

“Republicans are blaming Donald Trump for anointing wacky candidates and then using campaign rallies to promote his upcoming presidential announcement. Republican lawmakers privately say those self-indulgent rallies cost them Senate and House seats because many normal Republicans and independents have had their fill of Trump and his crazy train.”

“The third time should be the charm. Since winning in 2016, Trump helped Republicans lose the House in 2018 and lose the White House and the Senate after the 2020 elections. Now he seems to have rescued Democrats from the traditional midterm shellacking— Republicans are barely within reach of a House majority and are watching their chance of controlling the Senate slip away. Trump has been poison for his party.”

“Polls showed that even many people unhappy with Joe Biden voted Democratic, a sign that Trump fatigue has finally set in. It’s so bad, the Murdoch empire has turned on its former fair-haired boy.”

“But Succession in Murdochworld seems to be well underway. Its new infatuation with Ron DeSanctimonious has obviously enraged Trump, who’s casting spells from his Palm Beach lair, his incoherent nastiness zinging Republican stars and anyone else who makes his combover stand on end.” 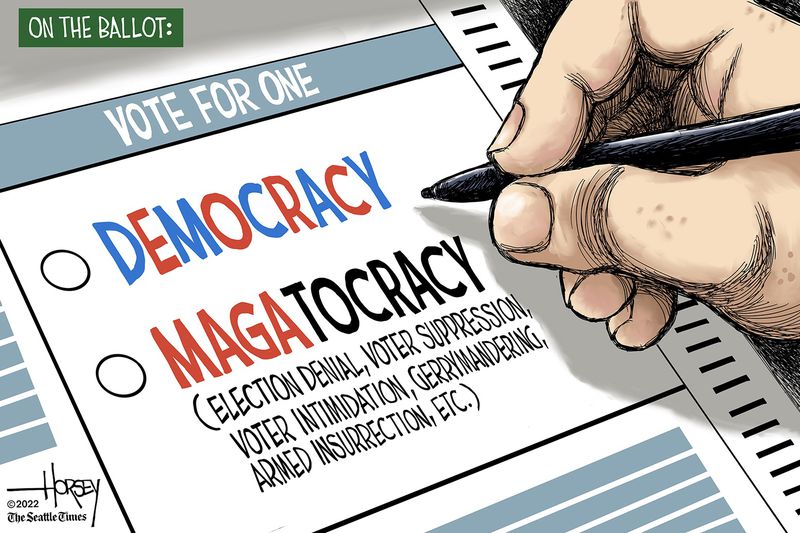 “The former president also had a “Heathers”-like hissy-fit against Ron DeSantis. First, he thuggishly threatened the Florida governor after his Ohio rally last Monday, warning him not to think about getting in the presidential race.”

“If he did run, I will tell you things about him that won’t be very flattering,” Trump said. “I know more about him than anyone other than perhaps his wife, who is really running his campaign.”

“After DeSantis had a crushing victory in the once swingy Sunshine State, declaring it the place “woke goes to die,” Trump’s puerile jealousy exploded. He posted that he had rescued DeSantis when he was “politically dead.”

“And now Ron DeSanctimonious is playing games!” said Trump, angry that DeSantis wouldn’t rule out running for president in 2024.” 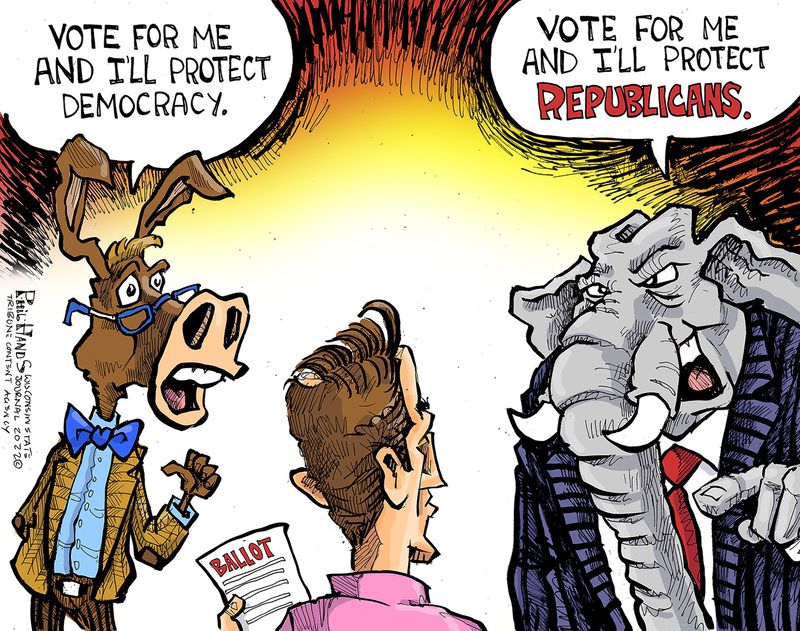 “Republicans refused to convict Trump on impeachment charges and ban him from running for public office. Now they’re living with the consequences. It’s not hard to imagine that this revolt against the revolting Trump will die down in a few days and they’ll all be back behind this person that they blame for their current convulsions.”

“If blackmailing Ukraine, inciting a riot, trying to overturn the election, hoarding classified documents, using overtly racist language for 7 years, including at Glenn Youngkin on (11/12/2022), was not enough to cause you to walk away from Donald Trump,” the political analyst Ron Brownstein said on CNN Friday, what makes people think Trump is toast now?”

“One of the bright spots of the election is that a lot of people seemed to turn their back on crazy. Let’s hope that Republicans will get the message and move on from the King of Crazy before he gets another shot at destroying democracy.”