aside How The White House And Rep. Nunes Orchestrated Recent Show

The media has been fast at work following the tracks of the US House Intelligence Committee Chair Rep. Devin Nunes (R-CA) since his impromptu surreal performance around 3/22/17. This is when he claimed he had uncovered intelligence which was very concerning pertaining to the president’s claim of having been under surveillance. So far, we have figured out that a meeting with his source started around dusk on 3/21/17 at the White House. Then on 3/22/17 he had his huddle with the US House Speaker Paul Ryan (R-KY) before he participated in a quickie press conference, followed by a run to the White House to share his findings with the president which culminated with him holding another press conference outside of the White House. At no time did he take time to share his supposed discovery with his fellow committee members or even his own staffers. Despite Rep. David Nunes obvious divided loyalties, he is refusing to recuse himself from heading up the US House’s inquiry into the republican President Donald Trump’s Russian saga.

On 3/28/17, Ryan Lizza of the New Yorker penned the following report, “HOW THE WHITE HOUSE AND REPUBLICANS BLEW UP THE HOUSE RUSSIA INVESTIGATION.”

“The evidence is now clear that the White House and Devin Nunes, the chairman of the House Intelligence Committee, have worked together to halt what was previously billed as a sweeping investigation of Russian interference in last year’s election. “We’ve been frozen,” Jim Himes, a Democratic representative from Connecticut who is a member of the Committee, said.”

“The freeze started after last Monday’s hearing, where James Comey, the director of the Federal Bureau of Investigation, revealed that the F.B.I. has been investigating possible collusion between the Trump campaign and Russia since last July. Comey also said that there was no evidence to support Trump’s tweets about being wiretapped.”

“Today, the House panel was scheduled to hear from three top officials who had served under the Obama Administration: Sally Yates, the former Deputy Attorney General, who briefly served as acting Attorney General, before being fired by President Trump: John Brennan, the former head of the C.I.A.; and James Clapper, the former director of national intelligence. But last week Nunes cancelled today’s hearing.”

“The Monday hearing last week was, I’m sure, not to the White House’s liking,” said Himes. “Since Monday, I’m sorry to say, the chairman has ceased to be the chairman of an investigative committee and has been running interference for the Trump White House, cancelling hearings.”

“Since then, Nunes and the White House have kicked up a cloud of peripheral issues that have distracted attention from Comey’s testimony and that of Michael Rogers, the director of the National Security Agency; Nunes and the Trump Administration have essentially shut down the investigation. Last night, Adam Schiff, the ranking Democrat on the Intelligence Committee, called for Nunes to recuse himself from the investigation. “All of this has cast such a cloud on the public perception of his impartiality that I think it would be in his interest as well as the committee’s,” he told me.” 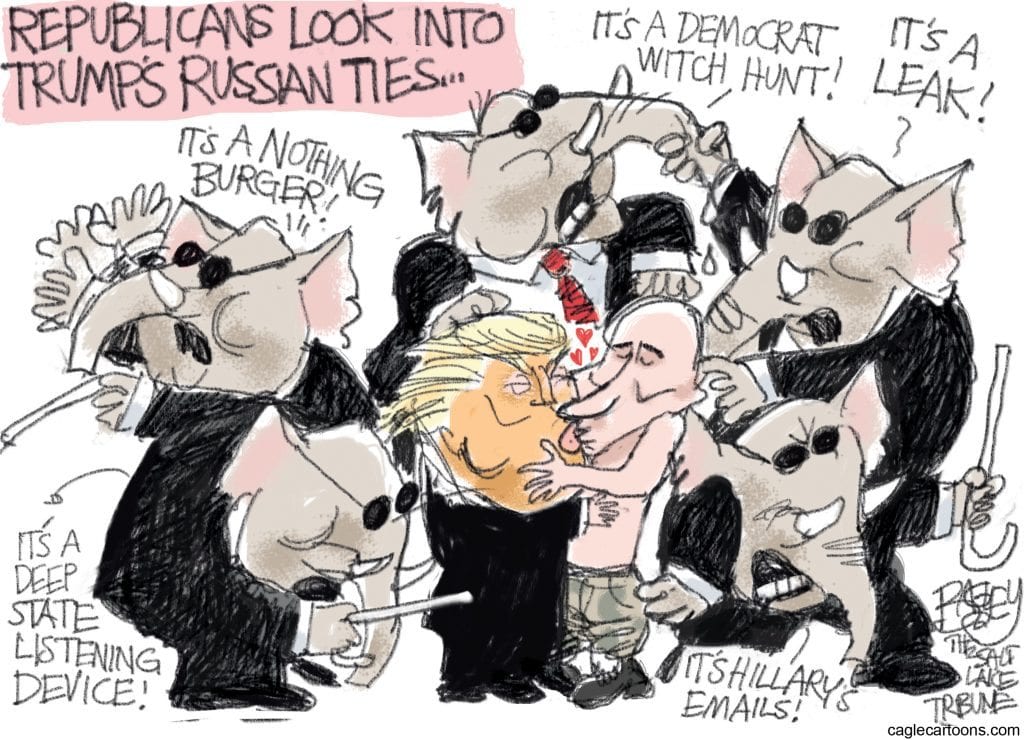 “Since last Monday’s hearing, Nunes, who was a member of the Trump transition team, has spoken repeatedly about the issue of incidental collection, the intelligence community’s term for the communications of innocent Americans that can be swept up when the N.S.A. or other agencies legally spy on a foreign target. The Russian Ambassador, a legal target of surveillance, was recorded talking to Michael Flynn, Trump’s former national-security adviser, who was a victim of incidental collection.”

“The White House and Nunes were clearly coördinating this strategy. A few days before the hearing, Trump seemed to offer a preview of it. In an interview on Fox News, the President said that he “will be submitting things” to Nunes’s committee “very soon,” and “perhaps speaking about this next week,” adding that “you’re going to find some very interesting items coming to the forefront over the next two weeks.” 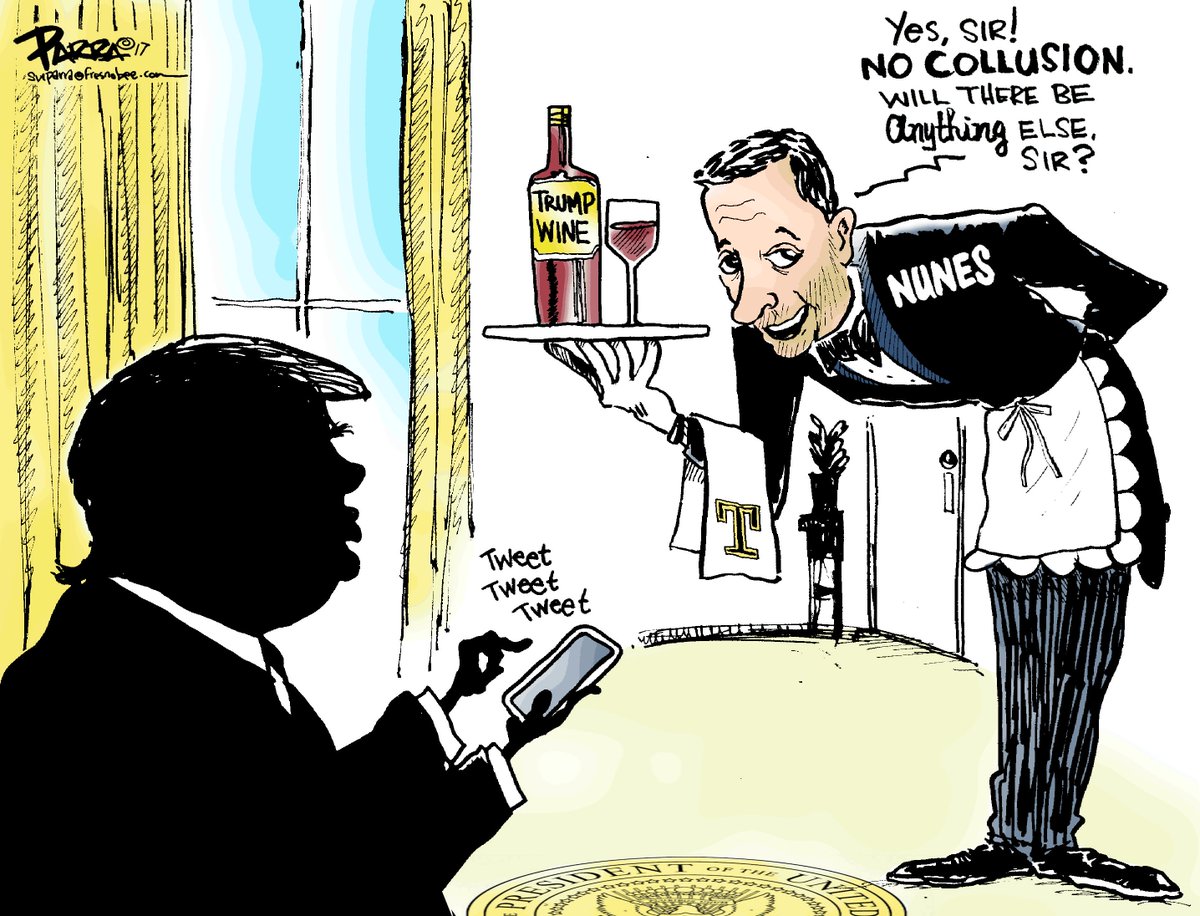 “Last Monday morning, shortly before the start of the hearing, a senior White House official told me, “You’ll see the setting of the predicate. That’s the thing to watch today.” He suggested that I read a piece in The Hill about incidental collection. The article posited that if “Trump or his advisors were speaking directly to foreign individuals who were the target of U.S. spying during the election campaign, and the intelligence agencies recorded Trump by accident, it’s plausible that those communications would have been collected and shared amongst intelligence agencies.”

“The White House clearly indicated to me that it knew Nunes would highlight this issue. “It’s backdoor surveillance where it’s not just incidental, it’s systematic,” the White House official said. “Watch Nunes today.”

“Sure enough, at last Monday’s hearing, Nunes asked in his opening statement, “Were the communications of officials or associates of any campaign subject to any kind of improper surveillance?” He continued, “The Intelligence Community has extremely strict procedures for handling information pertaining to any U.S. citizens who are subject even to incidental surveillance, and this committee wants to insure all surveillance activities have followed all relevant laws, rules, and regulations.” Nunes made it clear that Trump’s wiretapping claim was false, but he seemed intent on offering the President a fig leaf for the explosive claim. “It’s still possible that other surveillance activities were used against President Trump and his associates,” he insisted. The overwhelming majority of questions from Republicans at the hearing revolved around this issue.”

“Last Tuesday evening, Nunes went to a secure National Security Council facility on the grounds of the White House and reviewed intelligence reports, with the assistance of one or more unknown officials. (Michael Isikoff, of Yahoo News, reports that one of the officials may have been Michael Ellis, a former Nunes staffer who now works at the White House. When asked by reporters today, Nunes declined to confirm or deny the report.) The following morning, without informing any other members of the House Intelligence Committee about what he had learned, Nunes went back to the White House and briefed the President on those reports. He held press conferences, one at the Capitol and one outside the West Wing, before and after his meeting with Trump.”

“Last Friday, Nunes announced that he was cancelling the scheduled hearing with Yates, Brennan, and Clapper. The trio of Obama officials, who have said little in public about the Russia investigation, would have made for a riveting day of testimony. In late January, Yates informed the Trump White House that Michael Flynn, Trump’s national-security adviser at the time, misled his superiors about his contacts with Russian officials and therefore might be a target of blackmail attempts. On January 30th, she instructed Department of Justice lawyers not to defend Trump’s original travel ban, and Trump fired her. Brennan had helped to oversee the Obama Administration’s report about Russia’s interference in the Presidential campaign. As for Clapper, he contradicted Trump’s infamous false claim that Trump Tower was wiretapped by President Obama, saying, on “Meet the Press,” “For the part of the national-security apparatus that I oversaw as D.N.I., there was no such wiretap activity mounted against the President-elect at the time, or as a candidate, or against his campaign.”

“This morning, the Washington Post reported that, last week, just before Nunes cancelled the hearing at which Yates was scheduled to testify, Trump Administration lawyers tried to block her appearance. “Any blocking of anyone or anything simply stokes suspicion of what the Administration might be hiding,” Himes told me in response to the Post report. Sean Spicer, Trump’s press secretary, said in a statement, “The White House has taken no action to prevent Sally Yates from testifying and the Department of Justice specifically told her that it would not stop her.” (The Post posted correspondence between Yates’s attorney and the Administration that seems to contradict Spicer’s claim.)”

“Nunes said that he instead wanted Comey and Rogers to return to brief the Intelligence Committee in a closed setting. But that hearing hasn’t happened, either. When members return to Washington, usually on Mondays, the committee holds a so-called “hot spots” briefing at 5 p.m. about committee business, but, according to Himes, that briefing didn’t take place yesterday.”

“We’re all mystified. We get back on (3/27/17) and no information has been shared with Democrats, Republicans, staff,” Himes said. He added that calling for Comey and Rogers to return “was a very transparent effort to prevent Brennan and Clapper and the Deputy Attorney General from testifying.” He said that, since the bombshell claims by Comey and Rogers, “everything has been about muddying the waters and stopping us from proceeding.”

“Last night, Schiff, who had been cautiously optimistic about Nunes’s ability to conduct a fair investigation and more restrained in his criticism of Nunes than Himes and other Democrats, told me, “There does seem to have been a sense of urgency after the Monday (3/20/17) hearing to do something. Whether this was the White House feeling the need to rebut what the directors had said during the open hearing, when they completely repudiated him, I don’t know.”

“In a bit of political jiu-jitsu, Schiff, in addition to calling on Nunes to recuse himself from the Russia investigation, also said that Nunes could not be trusted to examine the broader issue of incidental collection. “Since he was a key part of that transition team, I don’t see how he can reasonably expect to lead an investigation into whether proper minimization procedures were being followed that might impact him personally,” Schiff told me.”