aside Did Russia Have Prior Knowledge About The 4/4/17 Syrian Gas Attack?

The Associated Press (AP) is breaking news by stating that it has confirmation that Russia had prior knowledge of the Syrian military’s plans to use sarin gas on its own peoples around 4/4/17. (But other U.S. officials are cautioning that a final determination has not yet been made.)

“The official said a drone operated by Russians was flying over a hospital as victims of the attack were rushing to get treatment. Hours after the drone left, a Russian-made fighter jet bombed the hospital in what American officials believe was an attempt to cover up the usage of chemical weapons.”

“The senior official said the U.S. has no proof of Russian involvement in the actual chemical attack in northern Syria.”

“But the official said the presence of the surveillance drone over the hospital couldn’t have been a coincidence, and that Russia must have known the chemical weapons attack was coming and that victims were seeking treatment.”

“The official, who wasn’t authorized to speak publicly on intelligence matters and demanded anonymity, didn’t give precise timing for when the drone was in the area, where more than 80 people were killed. The official also didn’t provide details for the military and intelligence information that form the basis of what the Pentagon now believes.”

“Another U.S. official cautioned that no final American determination has been made that Russia knew ahead of time that chemical weapons would be used. That official wasn’t authorized to speak about internal administration deliberations and spoke on condition of anonymity.”

“The allegation of Russian foreknowledge is grave, even by the standards of the currently dismal U.S.-Russian relations.”

“Although Russia has steadfastly supported Syrian President Bashar Assad’s government, and they’ve coordinated military attacks together, Washington has never previously accused Moscow of complicity in any attack that involved the gassing of innocent civilians, including children. The former Cold War foes even worked together in 2013 to remove and destroy more than 1,300 tons of Syrian chemical weapons and agents.”

“U.S. officials previously have said Russians routinely work with Syrians at the Shayrat air base where the attack is supposed to have originated. U.S. officials say the chemical weapons were stored there and that those elements add to the conclusion that Russia was complicit in the attack.” 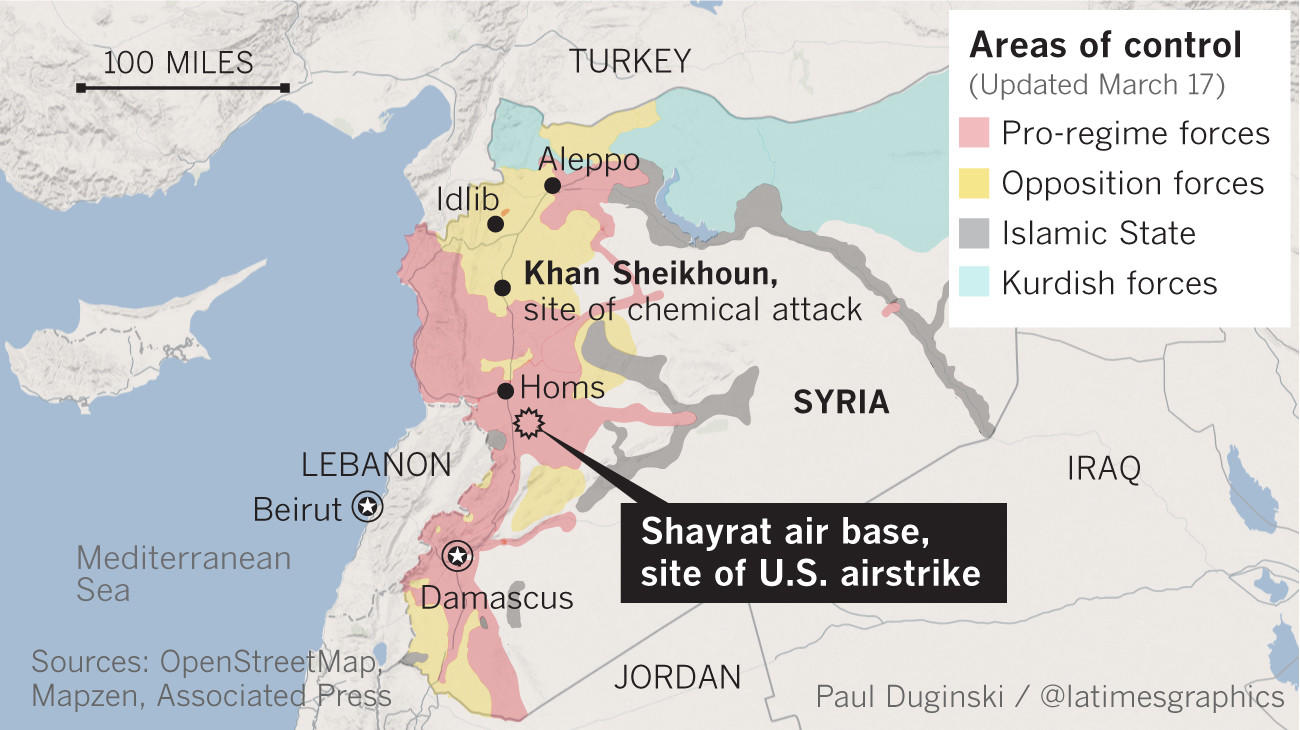 “Last Thursday 59 Tomahawk missiles were fired on the government-controlled base in the United States’ first direct military action against Assad’s forces.”

“The U.S. has been focusing its military action in Syria on defeating the Islamic State group.”

“On Monday, Col. John J. Thomas, a U.S. military spokesman, said the U.S. has taken extra defensive precautions in Syria in case of possible retaliation against American forces for the cruise missile attack.”

“Thomas told reporters at the Pentagon that the increased emphasis on defensive measures to protect U.S. troops on the ground in Syria led to a slight and temporary decline in offensive U.S. airstrikes against IS in Syria.”

“There has been no Syrian retaliation so far for the cruise missile attack, which destroyed or rendered inoperable more than 20 Syria air force planes, he said.”

“Thomas said the U.S. intends to return to full offensive air operations against IS as soon as possible.”