Around 2001, oil, black gold was discovered in the poverty stricken country of Chad in Africa. Then came the oil companies which greedily took advantage by promising to help the country of Chad in its development in exchange for access to the oil. Exxon was one of the major companies which cut a deal but then did almost nothing to help the inhabitants. Exxon started drilling for oil in 2003 but now it is faced with either pulling out of the area which could be very costly or to somehow negotiate with CHAD regarding the $75 billion dollars imposed by Chad courts against ExxonMobil. Its CEO Rex Tillerson is now the US Secretary of State.

This became a playbook for the oil companies as they invaded poor African oil rich countries, which was to promise the moon, deliver little but meanwhile the oil companies’ coffers are enriched by billions of dollars. If it took some monies to bribe the African corrupt leaders who did nothing for its citizens, so what?

There was a brave legislator Senator Ben Cardin (D-MD) who helped pass the 2010 Anti-Corruption Rule/ Law for Oil, Gas, Mining Industry which requires oil companies to disclose in their SEC filings payments (bribes) made to governments for oil, gas and mining activities.

This rule was rendered ineffective the day after the former Exxon CEO, and now the Secretary of State Rex Tillerson took office.

As per a 1/11/17 NY Times article, “Rex Tillerson’s Maverick Oil Diplomacy” by Jeremy Ashkenas, “In October 2001, officials from the World Bank, ExxonMobil, Chevron and Petronas of Malaysia joined the presidents of Chad and Cameroon in a ceremony celebrating the start of one of the largest oil infrastructure projects in African history: a $4.2 billion, 665-mile pipeline to carry crude oil from the floodplains of southern Chad, through Cameroon and to the Atlantic coast.”

“I view the Chad project as a clean sheet of paper,” said Mr. Tillerson, at the time an executive vice president. “We have the opportunity to put things in place perhaps the way you’d like to see them carried out from the very beginning.”

“Exxon had a presence in Chad since 1988, but the agreement, organized by the oil companies and the World Bank and signed into law by President Idriss Déby Itno in 1999, pledged that 80 percent of its oil revenue would go to social development in education, health, agriculture and infrastructure, and another 10 percent would be kept in a “future generations” fund.”

“The agreement was seen as an aspirational example, in which the oil companies could enhance the security of their drilling operations and the political stability of the country by ensuring that oil revenue would help to raise the living standards of Chad’s impoverished citizens.” 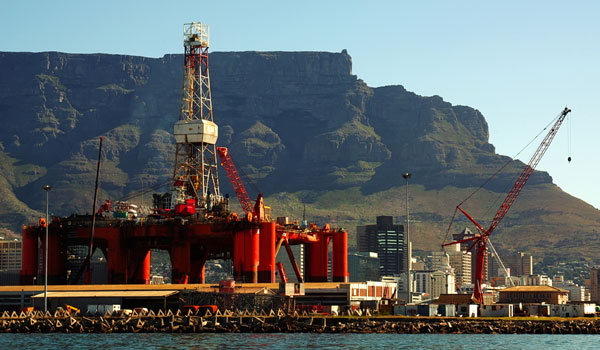 “But the pledge was not honored. During Mr. Tillerson’s tenure as C.E.O. in 2008, the World Bank decided to shut down the program that had helped finance the African pipeline, after a report found that much of the money had been wasted and embezzled.”

On 4/30/17 BBC News published the following chronology of events in Chad.

1946 – “Chad becomes a French overseas territory with its own territorial parliament and representation in the French National Assembly.”

1963 – “The banning of political parties triggers violent opposition in the Muslim north, led by the Chadian National Liberation Front, or Frolinat.”

1973 -” French troops help put down the northern revolt, but Frolinat continues guerrilla operations throughout the 1970s and 1980s with the help of weapons supplied by Libya.”

1975 – “Tombalbaye deposed and killed in coup led by another southern Christian, Felix Malloum.”

1980 – “Libya sends in troops to support Oueddei in his fight against the Army of the North, led by a former prime minister, Hissene Habre.”

1982 -“Habre seizes power. He is later accused of mass political killings during his rule.”

1983 – “The Organisation of African Unity recognises Habre’s government, but Oueddei’s forces continue resistance in the north with Libyan help.”

1987 – “The combined troops of Frolinat and the Chadian Government, with French and US assistance, force Libya out of the entire northern region apart from the Aouzou strip and parts of Tibesti.”

1993 – “National democracy conference sets up a transitional government with Deby as interim president and calls for free elections within a year.”

1994 – “International Court of Justice rejects Libyan claims on Aouzou and rules that Chad had sovereignty over the strip.”

1998 – “The Movement for Democracy and Justice in Chad, led by Deby’s former Defence Minister, Youssouf Togoimi, begins armed rebellion against the government.”

2001 – “Senegalese court rules that upholds ruling that former Chadian President Habre should not be made to stand trial in Senegal, where he is in exile. It decided that Senegal’s courts do not have the jurisdiction to try Habre on torture charges during his eight years in power in Chad.”

2002 May -“MDJT rebels and government forces clash in the far north; 64 are killed in the first outbreak of fighting since January’s peace accord.”

2003 October – “Chad becomes an oil exporter with the opening of a pipeline connecting its oil fields with Cameroon. (Exxon)”

2005 June -” Voters back constitutional changes which allow the president to stand for a third term in 2006.”

2005 November – “Former president, Hissene Habre, is arrested in Senegal over allegations of crimes against humanity.”

2005 December -” Rebels attack the town of Adre, near the Sudanese border. Chad accuses Sudan of being behind the incident.”

2006 January – “President Deby backs a law to reduce the amount of oil money spent on development. The move angers the World Bank, which suspends loans and orders the account used to collect oil revenues to be frozen.”

2006 March – “Government says an attempted military coup has been thwarted.”

2006 April – “Rebels seeking to oust President Deby battle government forces on the outskirts of the capital. Hundreds of people are killed. Chad cuts diplomatic ties with Sudan, accusing it of backing the rebels.”

2006 May – “President Deby is declared the winner of presidential elections. The main opposition parties boycott the poll.”

2006 July – “Parliament approves the establishment of Chad’s first state oil company, the Societe des Hydrocarbures du Tchad (SHT), which is expected to give Chad greater control over its energy assets.”

2006 August – “President Deby threatens to expel US energy giant Chevron and Malaysia’s Petronas for failing to honour tax obligations, but relents after coming to an agreement with the companies.”

2006 December – “Private newspapers stop publishing and several radio stations alter their programming to protest against state censorship under the state of emergency.”

2007 February – “UN refugee agency warns that violence against civilians in Chad could turn into a genocide.”

2007 May – “Chad and Sudan agree to stop conflict spilling across their borders but critics fear the agreement is unlikely to reduce the violence.”

2007 October – “Emergency declared along eastern border and in the desert north.”

“Scandal as French charity tries to airlift a group of 100 ”orphans” to Europe in what Chad describes as a smuggling operation.”

2007 December – “Six French aid workers are convicted of child-trafficking and sentenced to eight years’ hard labor, but are then repatriated to serve their sentences at home.”

2008 January – “European Union approves a peacekeeping force for Chad to protect refugees from violence in Darfur.”

“Rebels are repulsed in fighting that leaves more than 100 dead.”

2008 March – “The presidents of Chad and Sudan sign an accord in Senegal aimed at halting five years of hostilities between the two countries.”

2008 May – “Violence between Chadian and Sudanese militias flares up, leading to Sudan cutting diplomatic relations and Chad responding by closing its border and cutting economic ties.”

2008 July – “Security forces say they killed more than 70 followers of Muslim spiritual leader Ahmat Israel Bichara, who had threatened to launch a holy war, in fighting in southeast Chad.”

2009 May – “UN Security Council condemns a major anti-government rebel offensive in the east.’

“Six international aid groups, including the International Red Cross, suspend work in eastern Chad, citing risk of their staff being abducted or killed.”

2010 March – “Chad agrees to let UN peacekeeping force (Minurcat) to stay on for two months beyond the end of its mandate in mid-March, despite repeated criticism of its performance.”

2010 June – “Voter registration closes ahead of parliamentary polls in November and presidential elections in April 2011.”

“Experts meet to discuss how to protect Lake Chad, which has shrunk dramatically over past 50 years.”

2011 July – “Following a UN appeal, Senegal suspends the planned repatriation of former President Hissene Habre to his homeland, where he has been sentenced to death for crimes against humanity while president from 1982-1990.” 2013 April – “Chad agrees to send more troops to the Central African Republic to help stabilize it after a recent coup. Chadian forces have been present in the east of the country for months.”

2013 May – “Several people including an opposition MP and army officers are arrested in an alleged coup plot.” 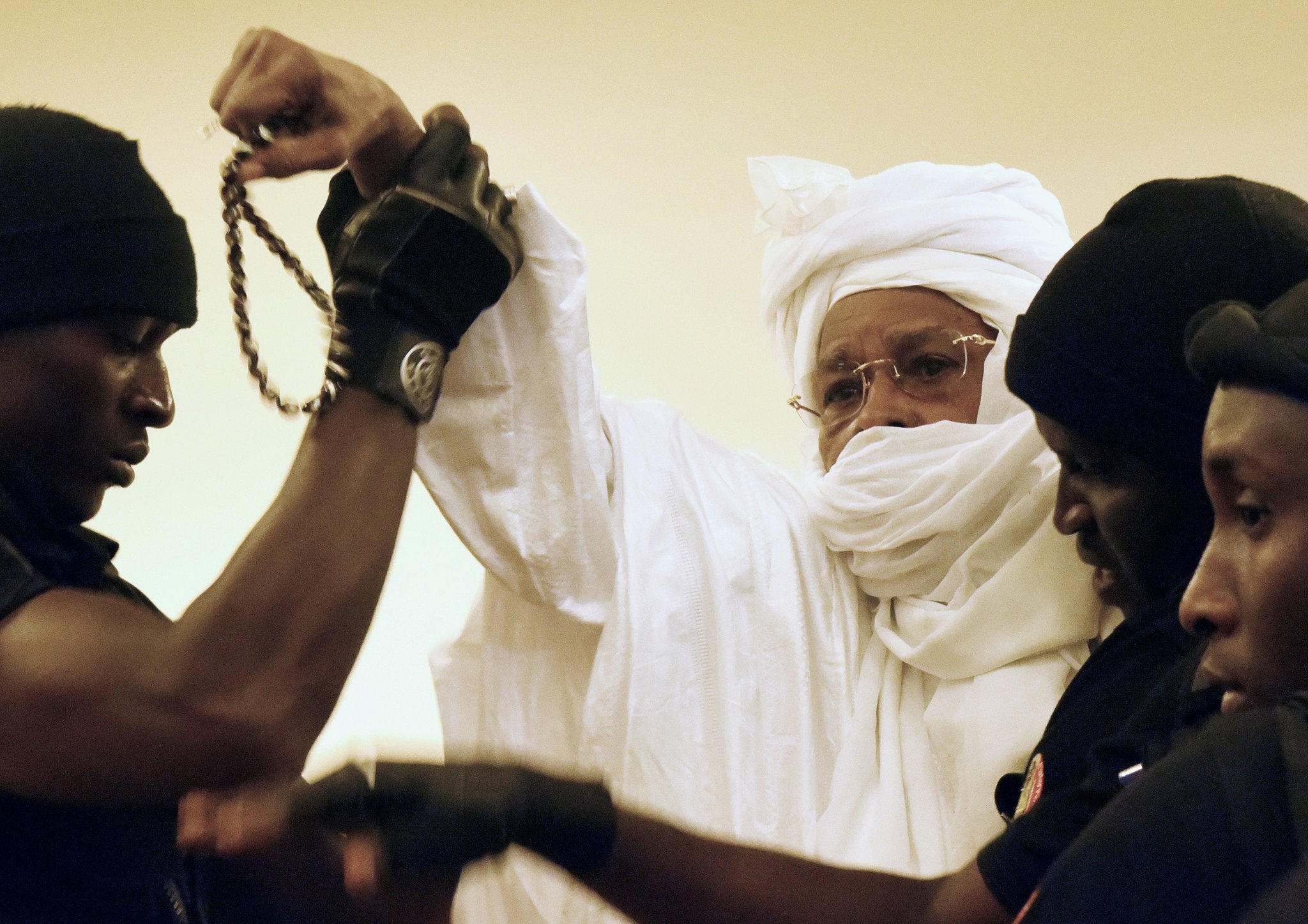 2013 July – “Former leader Hissene Habre is arrested in Senegal. Investigators seek to put him on trial for crimes against humanity. Mr Habre went to Senegal after being ousted in 1990. Rights groups say 40,000 people were killed under his rule.”

2014 February – “Chad denies claims that its troops have violated their peacekeeping role in the Central African Republic by colluding with rebels.”

“At a meeting in London, Chad is one of four African countries which pledge to honor a ten-year moratorium on sales of ivory, as part of efforts to curb the illegal trade.”

2014 March – “Chad says it will withdraw its troops from the Central African Republic, in protest at allegations that they’d supported Muslim rebels.”

2014 May – “Chad announces it is closing its border with the strife-torn Central African Republic until further notice.”

2014 July – “France says it is to set up a new military operation in the Sahel region in an effort to stop the emergence of jihadist groups. The operation based in the Chadian capital N’Djamena will involve around 3,000 French troops, along with troops from Mali, Mauritania, Burkina Faso and Chad.”

2015 February – “Boko Haram attacks the Chadian shore of Lake Chad one month after the country pledges military support for Cameroon against the Islamist armed group.”

“Extraordinary African Chamber court orders Hissene Habre to stand trail on charges of war crimes and crimes against humanity. He is in custody in Senegal, where the court will sit in the first use of universal jurisdiction in Africa.”

2015 March – “Seven former security officers jailed for life, five in absentia, and another three to 20 years hard labour for torturing prisoners during the rule of Hissene Habre.” 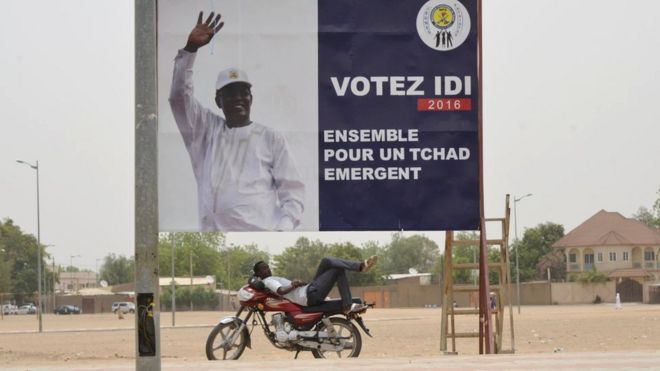 2016 February – “President Deby announces he will run for fifth term of office in April presidential election.”

2016 May – “Ex-leader Hissene Habre is found guilty of crimes against humanity and sentenced to life in prison by an African Union-backed court in Senegal.”

2017 February – “President Deby announces that parliamentary elections due this year have been postponed, as the country is too short of money to hold them.”