UPDATE On 5/7/17 around 7:00 pm GMT or 2:00PM ET : After over 50 % of the votes in France have been counted, the projected winner was Emmanuel Macron at about 66%. This was a landslide victory for the more centrist candidate Monsieur Macron against the more populist contender, Marine Le Pen. Emmanuel Macron is now the President of France.

Why was I so certain of an  Emmanuel Macron victory?  The answer is so simple. This time when Russia hacked Macron’s computer systems and leaked all the data to the world, the government of France took an honorable stand against this act by a foreign entity to compromise its presidential 2017 election process and the press cooperated. The peoples of France were permitted to vote in a an election unencumbered by Russia’s intent to influence the outcome.

So far, the only negative news about today’s elections in France is that those showing up to vote before noon is less than the numbers who voted in 2007 and 2012.

Too bad, the US government and the press did not act equally in a principled way to protect the American peoples from a tainted 2016 presidential election, instead our government with help from the press permitted Russia to successfully meddle in US politics. “We the people” were let down.

To add salt to our wounds of “we the people” we lack faith in the US republican led legislative body to conduct a competent, transparent and thorough investigation as to how Russia compromised and interfered in the U.S. 2016 PRESIDENTIAL ELECTIONS.

The world is rooting for the peoples of France, and here is the latest update on Sunday morning in the USA which means it is in the afternoon in France…

On 5/7/17, Griff Witte and Isaac Stanley-Becker of the Washington Post penned the following report,  “With Europe on the line, polarized French voters choose between Macron and Le Pen.”

“After months of improbable twists in its campaign to pick a president, France hurtled toward a choice Sunday with voters opting between a far-right firebrand who wants to deconstruct modern Europe and a centrist political neophyte who has promised to revive it.”

“Under clouds and a cool spring rain across much of the country, voters from the chic cafe neighborhoods of Paris to the struggling postindustrial towns of the French countryside made their way to polling stations for an election in which turnout is expected to top 75 percent.” 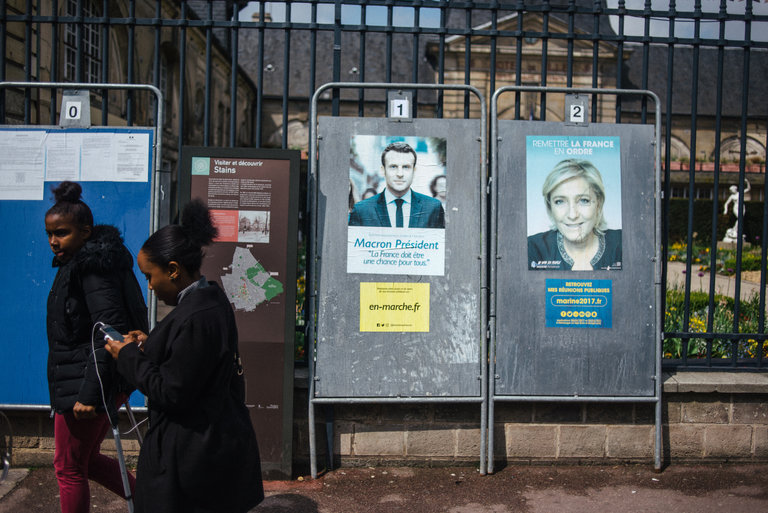 “Pre-election surveys showed centrist candidate Emmanuel Macron enjoying a wide lead over populist challenger Marine Le Pen. But following a campaign studded with surprises, France was braced at least for the possibility of one more.”

“I’m anxious,” said 47-year-old Sylvie Dartigues, a professional coach who cast her ballot amid the vaulted ceilings of Paris’s 17th-century Place des Vosges, a former royal residence that was also home to Victor Hugo. “I absolutely don’t want Marine Le Pen to be president. She represents everything that’s against my values: racism, intolerance and no real plan for the country.”

“Ninety miles away, in the small northern city of Laon, 66-year-old Lionel Abenton said he had voted for Le Pen because she wants to crack down on immigration and shows “loyalty to the French people.”

“She also stands up to globalization, which, waving his hand down main street as he enumerated the stores that have closed, Abenton blamed for the decline of the city that has been his home all his life. “It’s Europe that decides,” he said ruefully. ”

“Across France, voting was sluggish compared with previous elections. About 28 percent of the country had cast ballots by noon, down from the past two presidential contests in 2007 and 2012.”

“The election in a country beleaguered by chronically high unemployment and recurrent mass terrorist attacks will end in a historic decision no matter whom the majority among tens of millions of French voters select. ”

“The dominant two parties of France’s Fifth Republic have both been eliminated. The two candidates who remain, Le Pen and Macron, have both traced an outsider’s path as they have sought residence at the Élysée Palace. ”

“Le Pen, 48, is the second-generation leader of a party long relegated to the French political fringe but now maneuvering to the heart of the country’s unhappy political discourse with its attacks on immigration and the European Union.”

“Macron, 39, is a former investment banker and economy minister who bucked his ex-boss, President François Hollande, and launched a pro-European, pro-globalization movement that aims for the radical center by borrowing freely from both left and right. ”

“The outcome of Sunday’s vote will have profound implications not only for France’s 67 million citizens, but also for the future of Europe and for the political trajectory across the Western world.”

“After a pair of stunning triumphs in 2016 — Brexit in the United Kingdom, Donald Trump in the United States — France’s vote is a test of whether the political mainstream can beat back a rising tide from the populist right.”

“Many of Europe’s mainstream leaders — both center-right and center-left — lined up to cheer on Macron after he punched his ticket to the second round in a vote last month.”

“Europe’s powers-that-be are desperately hoping that France ignores Le Pen’s siren call to take her country out of both the euro and the European Union. Her victory would be considered a possible death blow to decades of efforts to draw Europe more closely together.”

“The current White House occupant, Trump, has been uncharacteristically cagey about his choice, saying before the first round that Le Pen was “the strongest on borders and she’s the strongest on what’s been going on in France.”

“On the campaign trail this spring, Le Pen’s rhetoric has often echoed Trump’s, with vows to put “France first” and to defend “the forgotten France.” She also condemns globalist cosmopolitans who she says do not have the nation’s interests at heart.”

“Macron shares almost nothing with Trump except one fact: If Macron wins, he, too, will have become president of his country on his first run for elective office.”

“The son of doctors who was raised in the northern city of Amiens, Macron had to teach himself the basics of campaigning on the fly in the white-hot glare of a presidential race. He also had to distance himself from Hollande, the historically unpopular Socialist incumbent who gave Macron his major break in politics by making him economy minister.”

“As leader of a movement he built from scratch — En Marche!, or Onward! — Macron has run on pledges to reform both France and Europe. But even with a wide margin of victory — which the polls all forecast — he could struggle to enact his agenda without sufficient backing in the French National Assembly. Parliamentary elections are due next month.”

“Despite his lead in the polls, surveys also show that most of Macron’s supporters say they see themselves voting against Le Pen rather than for him.”

“Launay said her first-round favorite, far-left candidate Jean-Luc Mélenchon, had campaigned with a “lyricism” that she found lacking in the two candidates who remain.”

“It’s important to dream,” she said. “Many foreigners may not understand, but in France we need poetry in our politics.”

“In Laon, the small city north of Paris, many voters said they were so disillusioned by the choice that they would cast a blank ballot.”

“Others said their disenchantment had led them to Le Pen — and a hope that, despite the polls, she can still eke out a victory that will bring the radical break for France that they crave. ”

“We’ve had 50 years of rule from the left and the right,” said Francis Morel, a 54-year-old breadmaker who cast his ballot for Le Pen.” .”