aside Trumpism Versus McCarthyism In The 1950s

We Americans have survived some really dark times and lived to put these ugly remembrances where they belong, in the history books for all to study for years to come.

Biography.com provides a synopsis of US legislator, Joseph McCarthy who in the 1950’s appealed to the public’s worst angels by targeting their fears, ignorance and prejudices which ended up doing great harm to the body of politics and to this country. For too many years, he used Americans’ fear of Russia (“Red Scare”) to criminalize anyone he believed to have communist leanings, causing many lives to be unfairly ruined. Republicans stood in the sidelines for quite some time, until he went a step too far by attacking the military.

This time we are dealing with the republican President Donald Trump who bears an uncommon resemblance in his behaviors to that of Joseph McCarthy. But this time the republican lawmakers are continuing to enable their standard bearer even when he dishes a military icon and hero like Senator John McCain and/ or when he resists holding to account, a foe which has trampled on our democracy. These republicans are facing being written up in future history books with similar unflattering characterizations.

“Joseph McCarthy was born on November 14, 1908, near Appleton, Wisconsin. In 1946 he was elected to the U.S. Senate, and in 1950 he publicly charged that 205 communists had infiltrated the U.S. State Department. Reelected in 1952, he became chair of the Senate’s subcommittee on investigations, and for the next two years he investigated various government departments and questioned innumerable witnesses, resulting in what would be known as the Red Scare. A corresponding Lavender Scare was also directed at LGBT federal employees, causing scores of citizens to lose their jobs. After a televised hearing in which he was discredited and condemned by Congress, McCarthy fell out of the spotlight. He died on May 2, 1957.”

On July 21, 2015, Peter Beinart of the Atlantic was prescient when he penned the following report, ” The New McCarthyism of Donald Trump.”

Pundits are pretty sure that Donald Trump has “jumped the shark.” “Mr. Trump’s candidacy probably reached an inflection point on Saturday after he essentially criticized John McCain for being captured during the Vietnam War,” declared The New York Times’ Nate Cohn last weekend. “Republican campaigns and elites quickly moved to condemn his comments.”

(Let’s hope) “Trump’s political career will have followed the same basic arc as that of another notorious American demagogue, Joseph McCarthy.”

Consider the parallels. First, McCarthy, like Trump, was an opportunist, not a zealot. Although the Wisconsin senator later grew famous hunting communists, communists in the Milwaukee branch of the Congress of Industrial Organizations played a key role in his initial Senate victory in 1946.

“In his first three years in the Senate, McCarthy hunted for an issue on which to make his name. He considered proposing a national pension plan or championing the St. Lawrence Seaway. But by 1950, the U.S.S.R. had tested an atomic weapon, communists had won China’s civil war, and alleged Soviet spy Alger Hiss had been convicted of perjury. Midwesterners, long suspicious of the East Coast’s foreign-policy class, and Catholics, bitter over Moscow’s domination of their co-religionists in Eastern Europe, were particularly receptive to claims that Washington elites had sold out America to the U.S.S.R. ”

“So in February 1950, McCarthy began loudly exploiting those grievances, famously declaring in Wheeling, West Virginia, that “I have here in my hand a list of 205 (communists) working and shaping policy in the State Department.”

“In the Obama era, however, Trump has discovered the power of racial and ethnic grievances himself. As early as 2007, when Obama began running for president, pollster Mark Penn sent Hillary Clinton a memo declaring that Obama was “not at his center fundamentally American in his thinking and values.” Obama critics relentlessly questioned his connection to, and love of, the United States. Polls showed that a plurality of Republicans  believed  Obama was not born in the United States.”

“Like McCarthy during the red scare, Trump saw his opening. “I have people that have been studying [Obama’s birth certificate] and they cannot believe what they’re finding,” Trump declared in 2011. “If he wasn’t born in this country, which is a real possibility…then he has pulled one of the great cons in the history of politics.” Trump also implied that Obama was a beneficiary of affirmative action. “I heard he was a terrible student, terrible,” the real estate mogul mused. “How does a bad student go to Columbia and then to Harvard? I’m thinking about it, I’m certainly looking into it. Let him show his records.”

“If McCarthy and Trump are similarly opportunistic, their party’s initial response to them was similarly craven. In 1950, McCarthy focused his attacks on progressives who had prior associations with communist front groups, diplomats who had counseled the United States to accept the inevitability of a communist victory in China, and gay men, who McCarthy claimed were at risk of Soviet blackmail.”

“And while a few Republicans, like Maine’s Margaret Chase Smith, denounced McCarthy, his popularity scared most of them into silence. (It scared some Democrats too. The Kennedy family, sensitive to McCarthy’s popularity among Massachusetts Catholics, hugged him close; Robert Kennedy even made the drunken demagogue godfather to his first child.) In 1950, when a Senate report declared McCarthy’s allegations a “fraud and a hoax,” Senate Republicans voted against it three times. In 1952, GOP presidential candidate Dwight Eisenhower campaigned with McCarthy in Wisconsin, even after McCarthy had attacked Ike’s old boss, General George Marshall.”

The GOP initially coddled Trump too. In 2012, despite Trump’s barely veiled racism, Mitt Romney said that, “having his endorsement is a delight” and deployed him as a campaign surrogate. Last month, when Trump announced his presidential candidacy in a speech calling Mexican immigrants “rapists,” the Republican National Committee still welcomed him into the race. Trump, the RNC declared, was a “high-caliber candidate.”

“It was only when McCarthy targeted the United States military that Republicans began taking him on. In late 1953, when McCarthy began investigating alleged communist influence in the Army, the Army counterattacked, accusing the Wisconsin Senator of using his influence to win special favors for a former aide now serving as a private. In March 1954, Vermont Republican Ralph Sanders proposed stripping McCarthy of his committee chairmanship. That June, Army lawyer Joseph Welch punctured McCarthy with the famous line, “Have you no sense of decency, sir, at long last? Have you left no sense of decency?” And in December, the Senate censured McCarthy, effectively ending his political career. Half the Republicans in the Senate voted yes.”

(Around July 18, 2015) “Trump ventured beyond his previous “soft” targets—immigrants, blacks, and President Obama—and claimed John McCain was not really a war hero. Trump’s GOP opponents, who until then had mostly tried to ignore him, pounced. Trump had “said some useful things,” declared Weekly Standard editor Bill Kristol on ABC. He had “brought some people into the Republican tent. [But] he jumped the shark yesterday.” Trump, Kristol predicted, (incorrectly) would collapse in the polls because “GOP primary voters respect the military.” The implication is that neither those voters, nor Kristol himself, respect Mexican immigrants enough to have turned against Trump when he insulted them.” 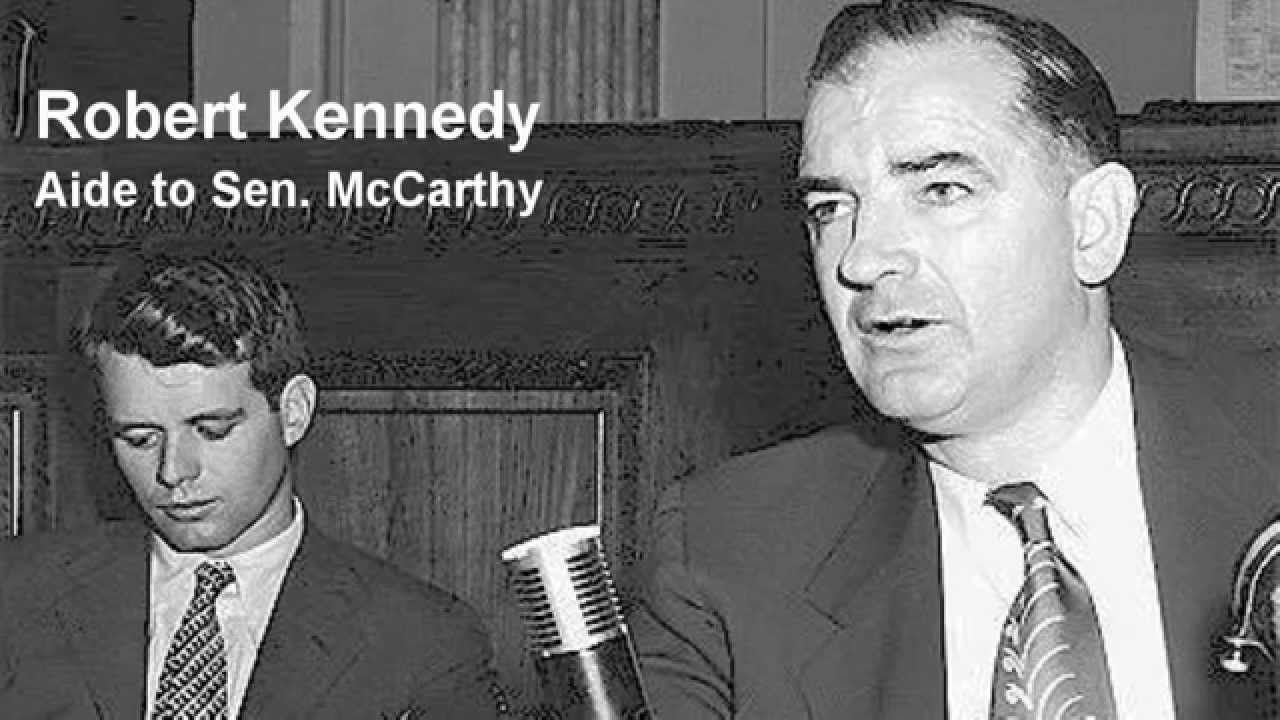 “One key lesson from both Trump and McCarthy’s demagoguery is that it was not inevitable. Both men would have happily taken up some other cause had it offered them a path to fame and power. It was their own party, and political elites more generally, who bred the hostility and fear that they exploited. It’s fine that Republicans are today denouncing Trump for his comments about John McCain” (or recently Mika Brzezinski.) But until more Republicans confront the demonization of immigrants, (other minority groups like our Muslim, Hispanic and Black communities), into which Trump has tapped, until they summon their outrage on behalf of people who don’t look or vote like them, someone else in the Trump/McCarthy mold will come along (to do damage).”

And how about a more respectful attitude towards all women? Republican Lawmakers, when are you going to stand up to this president for his bullying, cruel mistreatment of others?

This is an update on 7/2/17. Roger from across the pond and of the Woebegone but Hopeful blog has pointed out the irony in comparing these two figures. “McCarthy
preached that there were highly placed officials in the ranks of government who were in collusion with Russia, threatening the stability of the USA. And here we are; highly
placed officials”…avoiding facing the harm it is doing.