aside Rex Tillerson Is Decimating The US State Department, Bigly

There have been stories about how the republican President Donald Trump’s Secretary of State Rex Tillerson is demolishing the State Department. In case peoples thought or hoped that the reports were exaggerated, the description below by Max Bergmann, a six year former “Foggy Bottom” veteran shows that the description is instead, an understatement.

Ever since the Secretary of State, Rex Tillerson’s was sworn in, his attitude regarding the U.S. State Department has puzzled me. For example, he did not stand up for the institution when the president proposed steep budget cuts. And there have been the stories about his avoidance of expected public appearances and his refusal to travel with the press.

So, I have been ambivalent in my thinking of him. On the one hand, he as a former Exxon CEO, with great references by former secretaries of state like Condoleezza Rice and Robert Gates, and with contacts around the world, this appointment appeared to bode well.

The red flag regarding Mr. Tillerson had to do with his business dealings in Russia, specifically with his 2011 deal between ExxonMobil and Rosneft to explore the Russia’s Arctic for oil”(est. value up to $500 billion dollars). Because of this situation, there existed a valid concern that he would be highly motivated for the US to lift its 2014 sanctions, that it imposed upon Russia.

This lucrative deal was put on hold in 2014 after President Obama’s administration imposed wide-ranging sanctions against Russia in response to President Putin’s Crimea, Ukraine annexation that spring after Russia’s undercover and unprovoked invasion of eastern Ukraine.

The ban did include the US sharing of sophisticated offshore and shale oil technology which meant Exxon had to halt its drilling with Rosneft. And during the brief time span when EXXON was able to do some exploration, it had discovered a major Arctic field with some 750m barrels of new oil.

And while he has demonstrated a more sober eyed view towards Russia than the president, he has been consistent in his opposition to the 2014 sanctions imposed upon Russia.

But what is even more alarming than his bias towards Russia is that Exxon, while under his leadership, had several lawsuits filed against it, still in progress, from groups around the world for serious human rights’ infractions.

He has a history of being hostile towards the US State Department. (See the 1/17/17, Lee Fang and Steve Horn of Intercept report: “Rex Tillerson’s Exxon Mobil Frequently Sought State Department Assistance, New Documents Show)
Mr. Tillerson has provided clues about his disdain for the the consideration of “human rights’ issues when deploying diplomatic strategies. 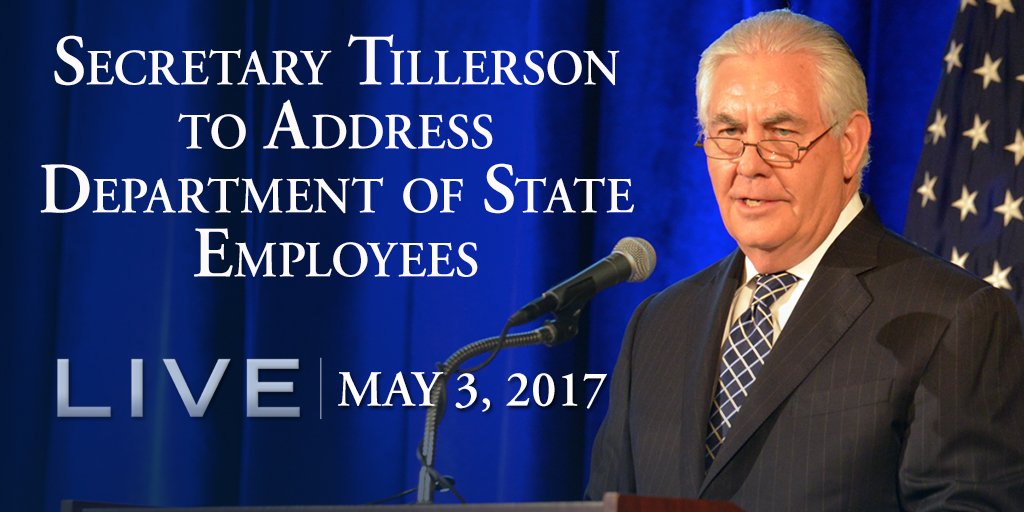 For instance, as per a 5/3/17 Reuters report by Yeganeh Torbati, At his May 2017 speech to his employees, “he signaled that the United States would de-emphasize human rights concerns in some of its interactions with other countries.”

“That remark drew criticism from some diplomats. One longtime department official, who requested anonymity to speak frankly, said that any move to demote human rights and democracy would risk the foundation of U.S. leadership in the world.”

IN SHORT, IT MAY BE THAT FROM THE START, MR. TILLERSON’S INTENT HAS BEEN TO GREATLY DIMINISH THE POWER OF THE US STATE DEPARTMENT DOWN TO ITS MOST MINIMUM OF ESSENTIAL FUNCTIONS. AND OF COURSE, THIS PLAN WOULD BE CONSISTENT WITH THE PRESIDENT’S VIEWS.

On June 29, 2017 Max Bergmann for Politico Magazine penned the following report, “Present at the Destruction: How Rex Tillerson Is Wrecking the State Department.”

The deconstruction of the State Department is well underway.

“I recently returned to Foggy Bottom for the first time since January 20 to attend the departure of a former colleague and career midlevel official—something that had sadly become routine. In my six years at State as a political appointee, under the Obama administration, I had gone to countless of these events. They usually followed a similar pattern: slightly awkward, but endearing formalities, a sense of melancholy at the loss of a valued teammate. But, in the end, a rather jovial celebration of a colleague’s work. These events usually petered out quickly, since there is work to do. At the State Department, the unspoken mantra is: The mission goes on, and no one is irreplaceable. But this event did not follow that pattern. It felt more like a funeral, not for the departing colleague, but for the dying organization they were leaving behind.”

“As I made the rounds and spoke with usually buttoned-up career officials, some who I knew well, some who I didn’t, from a cross section of offices covering various regions and functions, no one held back. To a person, I heard that the State Department was in “chaos,” “a disaster,” “terrible,” the leadership “totally incompetent.” This reflected what I had been hearing the past few months from friends still inside the department, but hearing it in rapid fire made my stomach churn. As I walked through the halls once stalked by diplomatic giants like Dean Acheson and James Baker, the deconstruction was literally visible. Furniture from now-closed offices crowded the hallways. Dropping in on one of my old offices, I expected to see a former colleague—a career senior foreign service officer—but was stunned to find out she had been abruptly forced into retirement and had departed the previous week.”

“This is how diplomacy dies. Not with a bang, but with a whimper. With empty offices on a midweek afternoon.”

“When Rex Tillerson was announced as secretary of state, there was a general feeling of excitement and relief in the department. After eight years of high-profile, jet-setting secretaries, the building was genuinely looking forward to having someone experienced in corporate management. Like all large, sprawling organizations, the State Department’s structure is in perpetual need of an organizational rethink. That was what was hoped for, but that is not what is happening. Tillerson is not reorganizing, he’s downsizing.”

“While the lack of senior political appointees has gotten a lot of attention, less attention has been paid to the hollowing out of the career workforce, who actually run the department day to day. Tillerson has canceled the incoming class of foreign service officers. This as if the Navy told all of its incoming Naval Academy officers they weren’t needed. Senior officers have been unceremoniously pushed out. He has dismissed State’s equivalent of an officer reserve—retired FSOs, who are often called upon to fill State’s many short-term staffing gaps, have been sent home despite no one to replace them. Office managers are now told three people must depart before they can make one hire. And now Bloomberg reports that Tillerson is blocking all lateral transfers within the department, preventing staffers from moving to another office even if it has an opening. Managers can’t fill openings; employees feel trapped.”

“Despite all this, career foreign and civil service officers are all still working incredibly hard representing the United States internationally. They’re still doing us proud. But how do you manage multimillion-dollar programs with no people? Who do you send to international meetings and summits? Maybe, my former colleagues are discovering, you just can’t implement that program or show up to that meeting. Tillerson’s actions amount to a geostrategic own-goal, weakening America by preventing America from showing up.” 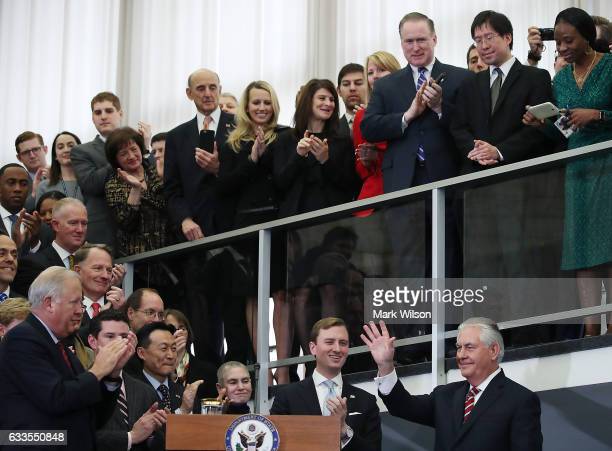 ” State’s growing policy irrelevance and Tillerson’s total aversion to the experts in his midst is prompting the department’s rising stars to search for the exits. The private sector and the Pentagon are vacuuming them up. This is inflicting long-term damage to the viability of the American diplomacy—and things were already tough. State has been operating under an austerity budget for the past six years since the 2011 Budget Control Act. Therefore, when Tillerson cuts, he is largely cutting into bone, not fat. The next administration won’t simply be able to flip a switch and reverse the damage. It takes years to recruit and develop diplomatic talent. What Vietnam did to hollow out our military, Tillerson is doing to State.”

“What we now know is that the building is being run by a tiny clique of ideologues who know nothing about the department but have insulated themselves from the people who do. Tillerson and his isolated and inexperienced cadres are going about reorganizing the department based on little more than gut feeling. They are going about it with vigor. And there is little Congress can seemingly do—though lawmakers control the purse strings, it’s hard to stop an agency from destroying itself.”

“At the root of the problem is the inherent distrust of the State Department and career officers. I can sympathize with this—I, too, was once a naive political appointee, like many of the Trump people. During the 2000s, when I was in my 20s, I couldn’t imagine anyone working for George W. Bush. Almost immediately after entering government, I realized how foolish I had been.”

“For most of Foggy Bottom, the politics of Washington might as well have been the politics of Timbuktu—a distant concern, with little relevance to most people’s work. I found that State’s career officials generally were more hawkish than most Democrats, but believe very much in American leadership in international organizations and in forging international agreements, putting them to the left of many Republicans. Politically, most supported politicians that they thought would best protect and strengthen American interests and global leadership.”

“Many career officials were often exasperated by the Obama administration and agreed with much of the conservative critique of his policies—hence the initial enthusiasm for Tillerson. By the end of my tenure, many of my closest and most trusted colleagues were registered Republicans, had worked in the Bush White House or were retired military officers.”

“What is clear, however, is that there is no pressing reason for (proposed) cuts. America is not in decline. Its economy is experiencing an unprecedented period of continuous economic growth, its technology sector is the envy of the world and the American military remains unmatched. Even now, under Trump, America’s allies and enduring values amplify its power and constrain its adversaries. America is not in decline—it is choosing to decline. And Tillerson is making that choice. He is quickly becoming one of the worst and most destructive secretaries of state in the history of our country.”