aside Is Another Civil War A Real Possibility In The USA? I was one of those who truly believed that the odds of Donald J. Trump winning the prize of becoming the next US president in 2016, were virtually nil but I was dead wrong. I would never have believed that neo-Nazis or other like-minded hate groups would never achieve acceptability in mainstream society but his belief has been shaken this past week with the Charlottesville, VA. events.

On August 14, 2017, Robin Wright of the New Yorker penned the followind article, “Is America Headed for a New Kind of Civil War?”

“A day after the brawling and racist brutality and deaths in Virginia, Governor Terry McAuliffe asked, “How did we get to this place?” The more relevant question after Charlottesville—and other deadly episodes in Ferguson, Charleston, Dallas, St. Paul, Baltimore, Baton Rouge, and Alexandria—is where the United States is headed. How fragile is the Union, our republic, and a country that has long been considered the world’s most stable democracy? The dangers are now bigger than the collective episodes of violence. “The radical right was more successful in entering the political mainstream last year than in half a century,” the Southern Poverty Law Center reported in February (2017). The organization documents more than nine hundred active (and growing) hate groups in the United States.” 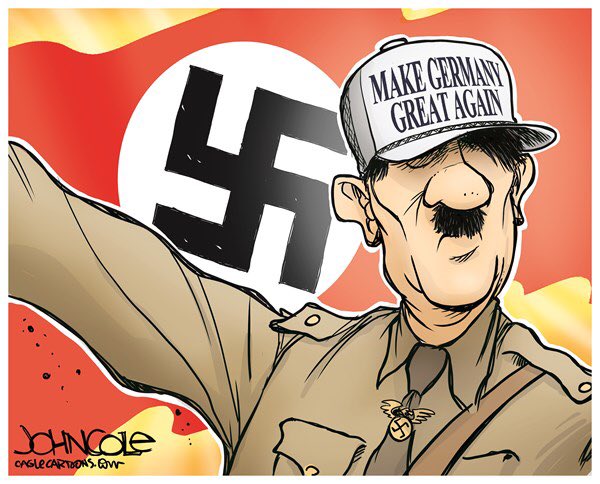 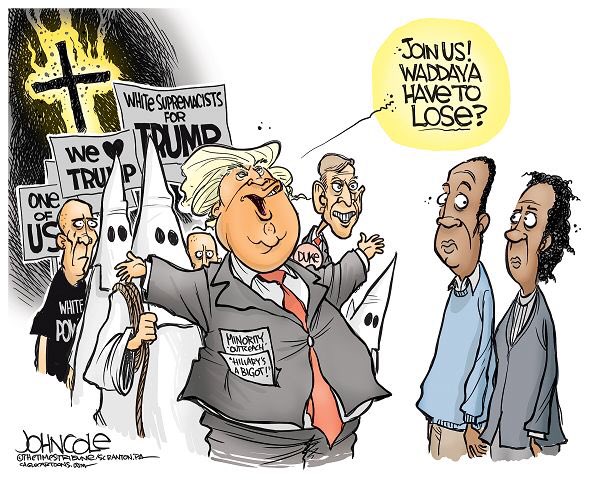 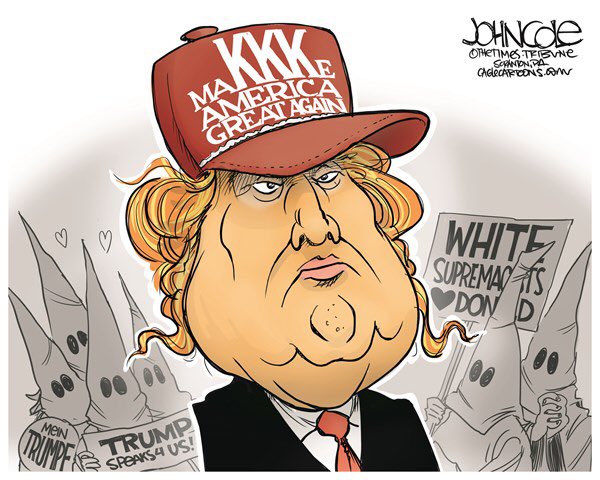 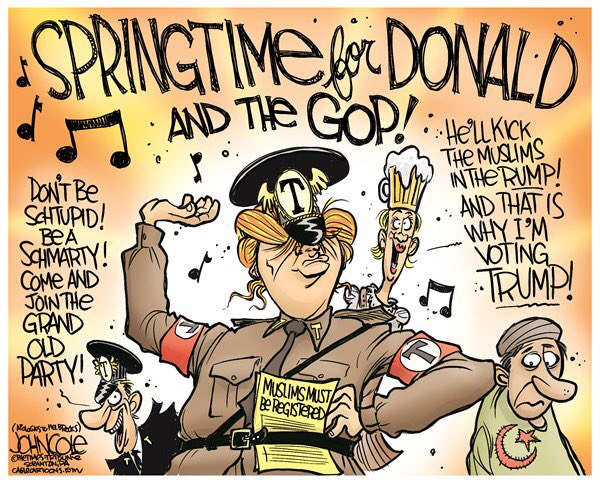 I’ve drawn a few cartoons about @POTUS‘ normalization of white nationalism/neo-nazism. Here are a few. #Virginia#CitronellaNazis

“America’s stability is increasingly an undercurrent in political discourse. Earlier this year, I began a conversation with Keith Mines about America’s turmoil. Mines has spent his career—in the U.S. Army Special Forces, the United Nations, and now the State Department—navigating civil wars in other countries, including Afghanistan, Colombia, El Salvador, Iraq, Somalia, and Sudan. He returned to Washington after sixteen years to find conditions that he had seen nurture conflict abroad now visible at home. It haunts him. In March, Mines was one of several national-security experts whom Foreign Policy asked to evaluate the risks of a second civil war—with percentages. Mines concluded that the United States faces a sixty-per-cent chance of civil war over the next ten to fifteen years. Other experts’ predictions ranged from five per cent to ninety-five per cent. The sobering consensus was thirty-five per cent. And that was five months before Charlottesville.” 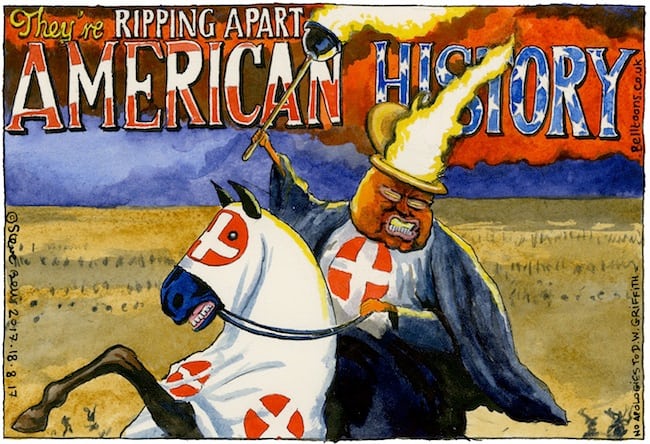 happen here,’ but then, holy smokes, it can,” Mines told me after we talked, on Sunday, about Charlottesville. The pattern of civil strife has evolved worldwide over the past sixty years. Today, few civil wars involve pitched battles from trenches along neat geographic front lines. Many are low-intensity conflicts with episodic violence in constantly moving locales. Mines’s definition of a civil war is large-scale violence that includes a rejection of traditional political authority and requires the National Guard to deal with it. On Saturday, McAuliffe put the National Guard on alert and declared a state of emergency.”

“Based on his experience in civil wars on three continents, Mines cited five conditions that support his prediction: entrenched national polarization, with no obvious meeting place for resolution; increasingly divisive press coverage and information flows; weakened institutions, notably Congress and the judiciary; a sellout or abandonment of responsibility by political leadership; and the legitimization of violence as the “in” way to either conduct discourse or solve disputes.”

“President Trump “modeled violence as a way to advance politically and validated bullying during and after the campaign,” Mines wrote in Foreign Policy. “Judging from recent events the left is now fully on board with this,” he continued, citing anarchists in anti-globalization riots as one of several flashpoints. “It is like 1859, everyone is mad about something and everyone has a gun.”

“To test Mines’s conjecture, I reached out to five prominent Civil War historians this weekend. “When you look at the map of red and blue states and overlap on top of it the map of the Civil War—and who was allied with who in the Civil War—not much has changed,” Judith Giesberg, the editor of the Journal of the Civil War Era and a historian at Villanova University, told me. “We never agreed on the outcome of the Civil War and the direction the country should go in. The postwar amendments were highly contentious—especially the Fourteenth Amendment, which provides equal protection under the law—and they still are today. What does it mean to deliver voting rights to people of color? We still don’t know.” 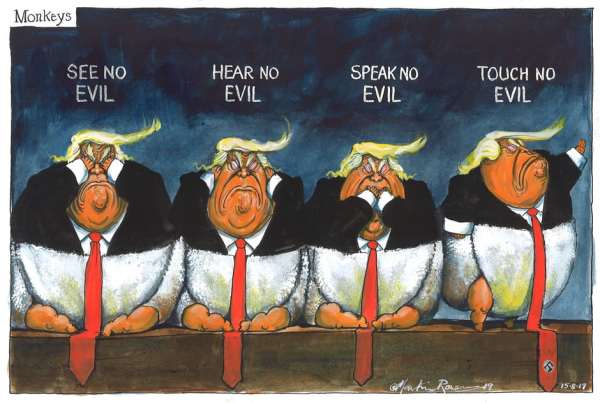 “She added, “Does that make us vulnerable to a repeat of the past? I don’t see a repeat of those specific circumstances. But that doesn’t mean we are not entering something similar in the way of a culture war.”

“Anxiety over deepening schisms and new conflict has an outlet in popular culture: in April, Amazon selected the dystopian novel “American War”—which centers on a second U.S. civil war—as one of its best books of the month. In a review in the Washington Post, Ron Charles wrote, “Across these scarred pages rages the clash that many of us are anxiously speculating about in the Trump era: a nation riven by irreconcilable ideologies, alienated by entrenched suspicions . . . both poignant and horrifying.” The Times book reviewer noted, “It’s a work of fiction. For the time being, anyway.” The book’s author, Omar El Akkad, was born in Egypt and covered the war in Afghanistan, the Arab Spring, and the Ferguson protest as a journalist for Canada’s Globe and Mail.” 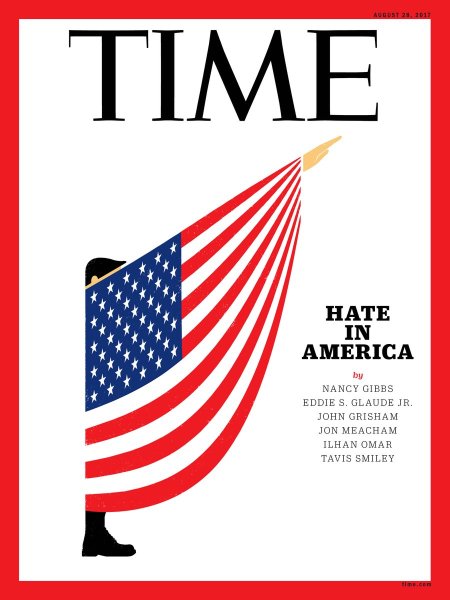 “Before Charlottesville, David Blight, a Yale historian, was already planning a conference in November on “American Disunion, Then and Now.” “Parallels and analogies are always risky, but we do have weakened institutions and not just polarized parties but parties that are risking disintegration, which is what happened in the eighteen-fifties,” he told me. “Slavery tore apart, over fifteen years, both major political parties. It destroyed the Whig Party, which was replaced by the Republican Party, and divided the Democratic Party into northern and southern parts.”

“In the eighteen-fifties, Blight told me, Americans were not good at foreseeing or absorbing the “shock of events,” including the Fugitive Slave Act, the Supreme Court’s Dred Scott decision, the John Brown raid, and even the Mexican-American War. “No one predicted them. They forced people to reposition themselves,” Blight said. “We’re going through one of those repositionings now. Trump’s election is one of them, and we’re still trying to figure it out. But it’s not new. It dates to Obama’s election. We thought that would lead culture in the other direction, but it didn’t,” he said. “There was a tremendous resistance from the right, then these episodes of police violence, and all these things [from the past] exploded again. It’s not only a racial polarization but a seizure about identity.”

“Generally, Blight added, “We know we are at risk of civil war, or something like it, when an election, an enactment, an event, an action by government or people in high places, becomes utterly unacceptable to a party, a large group, a significant constituency.” The nation witnessed tectonic shifts on the eve of the Civil War, and during the civil-rights era, the unrest of the late nineteen-sixties and the Vietnam War, he said. “It did not happen with Bush v. Gore, in 2000, but perhaps we were close.” 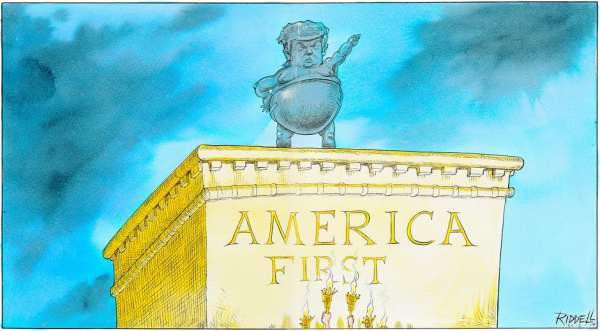 “In a reversal of public opinion from the nineteen-sixties, Blight said, the weakening of political institutions today has led Americans to shift their views on which institutions are credible. “Who do we put our faith in today? Maybe, ironically, the F.B.I.,” he said. “With all these military men in the Trump Administration, that’s where we’re putting our hope for the use of reason. It’s not the President. It’s not Congress, which is utterly dysfunctional and run by men who spent decades dividing us in order to keep control, and not even the Supreme Court, because it’s been so politicized.”

“In the wake of Charlottesville, the chorus of condemnation from politicians across the political spectrum has been encouraging, but it is not necessarily reassuring or an indicator about the future, Gregory Downs, a historian at the University of California at Davis, told me. During the Civil War, even Southern politicians who denounced or were wary of secession for years—including Jefferson Davis—ended up as leaders of the Confederacy. “If the source of conflict is deeply embedded in cultural or social forces, then politicians are not inherently able to restrain them with calls for reason,” Downs said. He called the noxious white supremacists and neo-Nazis the “messengers,” rather than the “architects,” of the Republic’s potential collapse. But, he warned, “We take our stability for granted.”

“He dug out for me a quote from the journalist Murat Halstead’s book “The War Claims of the South,” published in 1867. “The lesson of the war that should never depart from us,” Halstead wrote, “is that the American people have no exemption from the ordinary fate of humankind. If we sin, we must suffer for our sins, like the Empires that are tottering and the Nations that have perished.”

“Eric Foner, the Columbia University historian, won the Pulitzer Prize, in 2011, for his book “The Fiery Trial: Abraham Lincoln and American Slavery.” Like the other scholars I spoke to, Foner is skeptical that any future conflict will resemble America’s last civil war. “Obviously, we have some pretty deep divisions along multiple lines—racial, ideological, rural versus urban,” he told me. “Whether they will lead to civil war, I doubt. We have strong gravitational forces that counteract what we’re seeing today.” He pointed out that “the spark in Charlottesville—taking down a statue of Robert E. Lee—doesn’t have to do with civil war. People are not debating the Civil War. They’re debating American society and race today.”

“Charlottesville was not the first protest by the so-called alt-right, nor will it be the last. Nine more rallies are planned for next weekend and others in September.”