The crack of discontent has been widening between the republican President Donald Trump and the US Senate Majority Leader Mitch McConnell. The rift has become so wide, that their growing feud has become public knowledge.

On August 22, 2017, Alexander Burns and Jonathan Martin of the New York Times penned the following report, “Trump and McConnell Locked in a Cold War, Threatening the G.O.P. Agenda.”

“The relationship between President Trump and Senator Mitch McConnell, the majority leader, has disintegrated to the point that they have not spoken to each other in weeks, and Mr. McConnell has privately expressed uncertainty that Mr. Trump will be able to salvage his administration after a series of summer crises.”

“What was once an uneasy governing alliance has curdled into a feud of mutual resentment and sometimes outright hostility, complicated by the position of Mr. McConnell’s wife, Elaine L. Chao, in Mr. Trump’s cabinet, according to more than a dozen people briefed on their imperiled partnership. Angry phone calls and private badmouthing have devolved into open conflict, with the president threatening to oppose Republican senators who cross him, and Mr. McConnell mobilizing to their defense.”

“The rupture between Mr. Trump and Mr. McConnell comes at a highly perilous moment for Republicans, who face a number of urgent deadlines when they return to Washington next month. Congress must approve new spending measures and raise the statutory limit on government borrowing within weeks of reconvening, and Republicans are hoping to push through an elaborate rewrite of the federal tax code. There is scant room for legislative error on any front.”

“A protracted government shutdown or a default on sovereign debt could be disastrous — for the economy and for the party that controls the White House and both chambers of Congress.” 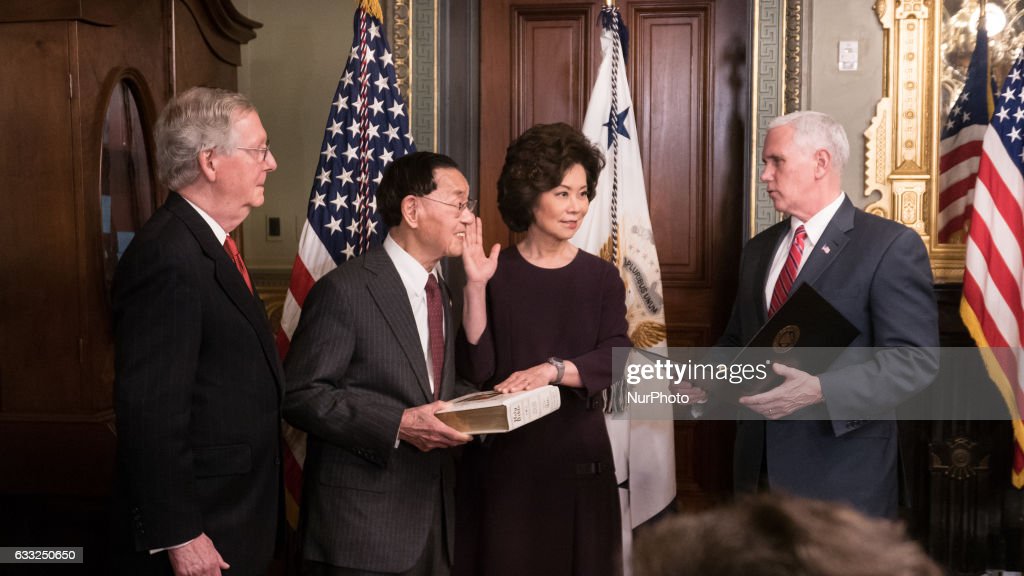 “Yet Mr. Trump and Mr. McConnell are locked in a political cold war. Don Stewart, a spokesman for Mr. McConnell, noted that the senator and the president had “shared goals,” and pointed to “tax reform, infrastructure, funding the government, not defaulting on the debt, passing the defense authorization bill.”

“In a series of tweets this month, Mr. Trump criticized Mr. McConnell publicly, then berated him in a phone call that quickly devolved into a profane shouting match.”

“During the call, which Mr. Trump initiated on Aug. 9 from his New Jersey golf club, the president accused Mr. McConnell of bungling the health care issue. He was even more animated about what he intimated was the Senate leader’s refusal to protect him from investigations of Russian interference in the 2016 election, according to Republicans briefed on the conversation.”

“Mr. McConnell has fumed over Mr. Trump’s regular threats against fellow Republicans and criticism of Senate rules, and questioned Mr. Trump’s understanding of the presidency in a public speech. Mr. McConnell has made sharper comments in private, describing Mr. Trump as entirely unwilling to learn the basics of governing.”

“In offhand remarks, Mr. McConnell has expressed a sense of bewilderment about where Mr. Trump’s presidency may be headed, and has mused about whether Mr. Trump will be in a position to lead the Republican Party into next year’s elections and beyond, according to people who have spoken to him directly.’ 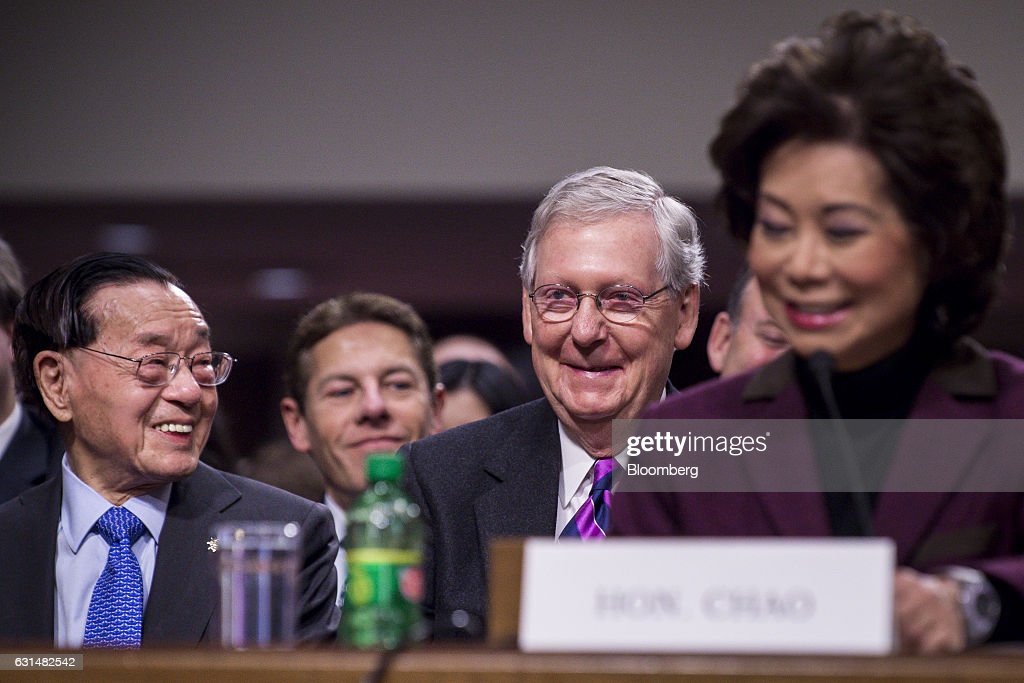 “While maintaining a pose of public reserve, Mr. McConnell expressed horror to advisers last week after Mr. Trump’s comments equating white supremacists in Charlottesville, Va., with protesters who rallied against them. Mr. Trump’s most explosive remarks came at a news conference in Manhattan, where he stood beside Ms. Chao. (Ms. Chao, deflecting a question about the tensions between her husband and the president she serves, told reporters, “I stand by my man — both of them.”)

“Mr. McConnell signaled to business leaders that he was deeply uncomfortable with Mr. Trump’s comments: Several who resigned advisory roles in the Trump administration contacted Mr. McConnell’s office after the fact, and were told that Mr. McConnell fully understood their choices.”

“If he does, senior Republican officials said the party’s senators would stand up for their colleague. A Republican “super PAC” aligned with Mr. McConnell released a web ad on Tuesday assailing Mr. Flake’s Republican rival, Kelli Ward, as a fringe-dwelling conspiracy theorist.”

“When it comes to the Senate, there’s an Article 5 understanding: An attack against one is an attack against all,” said Senator Lindsey Graham, Republican of South Carolina, who has found himself in Mr. Trump’s sights many times, invoking the NATO alliance’s mutual defense doctrine.”

“The fury among Senate Republicans toward Mr. Trump has been building since last month, even before he lashed out at Mr. McConnell. Some of them blame the president for not being able to rally the party around any version of legislation to repeal the Affordable Care Act, accusing him of not knowing even the basics about the policy. Senate Republicans also say strong-arm tactics from the White House backfired, making it harder to cobble together votes and have left bad feelings in the caucus.”

“When Mr. Trump addressed a Boy Scouts jamboree last month in West Virginia, White House aides told Senator Shelley Moore Capito, a Republican from the state whose support was in doubt, that she could only accompany him on Air Force One if she committed to voting for the health care bill. She declined the invitation, noting that she could not commit to voting for a measure she had not seen, according to Republican briefed on the conversation.”

“Senator Lisa Murkowski of Alaska told colleagues that when Mr. Trump’s interior secretary threatened to pull back federal funding for her state, she felt boxed in and unable to vote for the health care bill.”

“In a show of solidarity, albeit one planned well before Mr. Trump took aim at Mr. Flake, Mr. McConnell will host a $1,000-per-person dinner on Friday in Kentucky for the Arizona senator, as well as for Senator Dean Heller of Nevada, who is also facing a Trump-inspired primary race next year, and Senator Deb Fischer of Nebraska. Mr. Flake is expected to attend the event.”

“Former Senator Judd Gregg of New Hampshire, a Republican who is close to Mr. McConnell, said frustration with Mr. Trump was boiling over in the chamber. Mr. Gregg blamed the president for undermining congressional leaders, and said the House and Senate would have to govern on their own if Mr. Trump “can’t participate constructively.”

“Failure to do things like keeping the government open and passing a tax bill is the functional equivalent of playing Russian roulette with all the chambers loaded,” Mr. Gregg said.”

“An all-out clash between Mr. Trump and Mr. McConnell would play out between men whose strengths and weaknesses are very different. Mr. Trump is a political amateur, still un-schooled in the ways of Washington, but he maintains a vise-like grip on the affections of the Republican base. Mr. McConnell is a soft-spoken career politician, with virtuoso mastery of political fund-raising and tactics, but he had no mass following to speak of.” 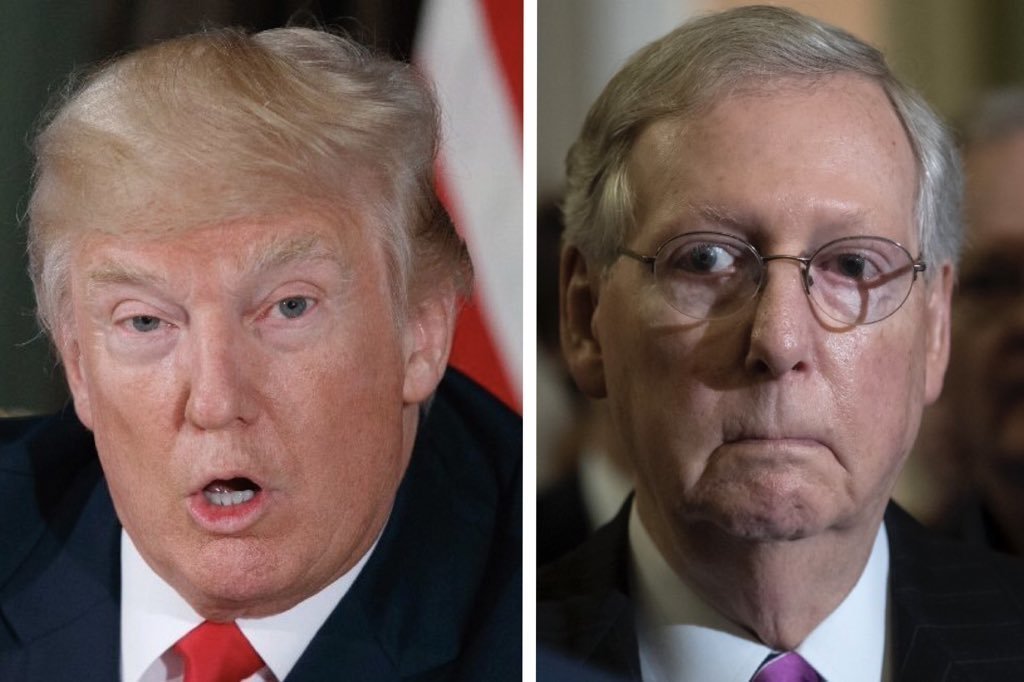 “Mr. McConnell, while baffled at Mr. Trump’s penchant for internecine attacks, is a ruthless pragmatist and has given no overt indication that he plans to seek more drastic conflict. Despite his private battles with Mr. Trump, Mr. McConnell has sent reassuring signals with his public conduct: On Monday, he appeared in Louisville, Ky., with Steven Mnuchin, the Treasury secretary, for a discussion of tax policy.”

“Mr. McConnell’s Senate colleagues, however, have grown bolder. The combination of the president’s frontal attacks on Senate Republicans and his claim that there were “fine people” marching with white supremacists in Charlottesville has emboldened lawmakers to criticize Mr. Trump in withering terms.”

“Senator Bob Corker of Tennessee rebuked Mr. Trump last week for failing to “demonstrate the stability nor some of the competence” required of presidents. On Monday, Senator Susan Collins of Mainesaid in a television interview that she was uncertain Mr. Trump would be the Republican presidential nominee in 2020.”

“For the moment, Mr. McConnell appears to be secure in his position, and perhaps immune to coercion from the White House. Republicans are unlikely to lose control of the Senate in 2018, and Mr. Trump has no allies in the Senate who have shown an appetite for combat with Mr. McConnell.”

“Still, some allies of Mr. Trump on the right — including Stephen K. Bannon, who stepped down last week as Mr. Trump’s chief strategist — welcome more direct conflict with Mr. McConnell and congressional Republicans.”

“Roger J. Stone Jr., a Republican strategist who has advised Mr. Trump for decades, said the president needed to “take a scalp” in order to force cooperation from Republican elites who have resisted his agenda. Mr. Stone urged Mr. Trump to make an example of one or more Republicans, like Mr. Flake, who have refused to give full support to his administration.”

“But Mr. McConnell’s allies warn that the president should be wary of doing anything that could jeopardize the Senate Republican majority.”

“The quickest way for him to get impeached is for Trump to knock off Jeff Flake and Dean Heller and be faced with a Democrat-led Senate,” said Billy Piper, a lobbyist and former McConnell chief of staff.”