aside Hurricane Maria Had Little Mercy When It Hit Puerto Rico On September 20, 2017

The news about the impact of Hurricane Maria’s impact on Puerto Rico is grim. There is no power and it may take months before power is returned to all households. According to one news report, about 70% of houses lost roofs.

The peoples for Puerto Rico will be needing all the encouragement, support and help that we can provide. A fellow blogger, yahtzeebutterfly shared this link with a list of ways to help:  http://www.miamiherald.com/news/weather/hurricane/article174448221.html

“Hurricane Maria delivered a destructive full-body blow to this U.S. territory on Wednesday 9/20/17), ripping off metal roofs, generating terrifying and potentially lethal flash floods, knocking out 100 percent of the island’s electrical grid and decimating some communities.”

“With sustained winds of 155 mph at landfall — a strong Category 4 storm and nearly a Category 5 — Maria was so powerful that it disabled radar, weather stations and cell towers across Puerto Rico, leaving an information vacuum in which officials could only speculate about property damage, injuries or deaths.”

“Definitely Puerto Rico — when we can get outside — we will find our island destroyed,” Abner Gómez, director of Puerto Rico’s emergency management agency, said in a midday news conference here. “The information we have received is not encouraging. It’s a system that has destroyed everything it has had in its path.”

“The entire island experienced hurricane conditions, with 20 inches or more of rain falling, often at torrential rates of up to seven inches per hour, leading to reports of raging floodwaters and people seeking help to escape them.” 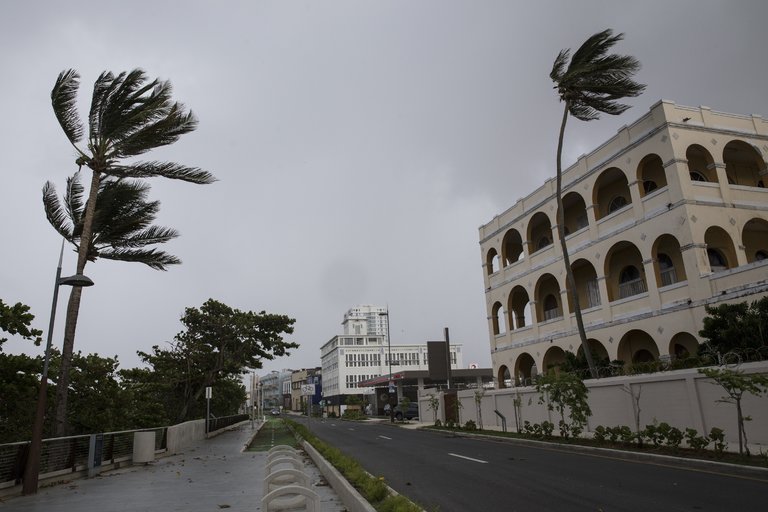 “The storm, having passed through the U.S. Virgin Islands earlier, made landfall on the Puerto Rican coast near Yabucoa at 6:15 a.m. It was the first Category 4 storm to strike the island directly since 1932. By midmorning, Maria had fully engulfed the 100-mile-long island.”

“In San Juan, the capital, Maria shook buildings and blew out windows. Residents of high-rise apartments sought refuge in bathrooms.” “First responders, including a fire-rescue team deployed from Fairfax, Va., had to ride out the storm for hours before emerging to help people. In the meantime, calls to emergency services went in vain. A family in the southern coastal town of Guayama, for example, reportedly pleaded for help as they were trapped in their home with rising water. In Hato Rey, a San Juan business district, a woman sought assistance as she was experiencing labor pains. “Unfortunately, our staff cannot leave,” Gómez said at the news conference. “They’ll be rescued later.”

“Macarena Gil Gandia, a resident of Hato Rey, helped her mother clean out water that had started flooding the kitchen of her second-floor apartment at dawn.”

“There are sounds coming from all sides,” Gil Gandia said in a text message. “The building is moving! And we’re only on the second floor, imagine the rest!”

“Farther west, in the community of Juana Matos, in the city of Catano, 80 percent of the structures were destroyed, the mayor of Catano told El Nuevo Día.”

“The area is completely flooded. Water got into the houses. The houses have no roof,” the mayor said. “Most of them are made of wood and zinc, and electric poles fell on them.”

“William “Brock” Long, administrator of the Federal Emergency Management Agency, told The Washington Post that rescue and recovery operations are poised to help the U.S. territories — and had significant resources already deployed in the area as a result of Hurricane Irma, which hit the region just days ago.”

“Right now we’re in wait-and-see mode,” Long said Wednesday afternoon. “We know that St. Croix took a tremendous hit, and we know obviously Puerto Rico took the brunt of the storm. Once the weather clears and the seas die down, we’ll be in full operation.”

“Satellite images showed that Maria became disorganized, without a defined eye, and weakened as it moved slowly across the high terrain of Puerto Rico. Late Wednesday afternoon, the center of the vast storm exited the north coast of the island, its peak winds having dropped to 110 mph as a dangerous but less powerful Category 2 storm.”

“Maria was the most violent tropical cyclone to hit Puerto Rico in more than 80 years. It had raked St. Croix hours earlier, just two weeks after that island was the only major land mass in the U.S. Virgin Islands that was spared Hurricane Irma’s wrath.”

“Puerto Rico Gov. Ricardo Rosselló on Wednesday (9/20/17) afternoon imposed a 6 p.m. to 6 a.m. curfew for the general public, which will continue until Saturday.”

“Resist, Puerto Rico,” the governor tweeted earlier as the storm blew in. “God is with us; we are stronger than any hurricane. Together we will lift up.”

“Speaking on NBC’s “Today” show Wednesday (9/20/17), Rosselló said, “This is clearly going to be the most devastating storm in the history of our island.”

“Buildings that meet the island’s newer construction codes, established around 2011, should have been able to weather the winds, Rosselló said. But wooden homes in flood-prone areas “have no chance,” he predicted.”

The last hurricane to make landfall in Puerto Rico was Georges in 1998. Just one Category 5 hurricane has hit Puerto Rico in recorded history, in 1928.”

“Puerto Rico’s vulnerability to tropical cyclones has been driven home in the past 2 weeks as first Irma and then Maria have howled into the Caribbean. The back-to-back nature of the storms has had one minor upside: Some 3,200 federal government staffers, National Guardsmen and other emergency personnel overseen already were in Puerto Rico when Maria approached.” 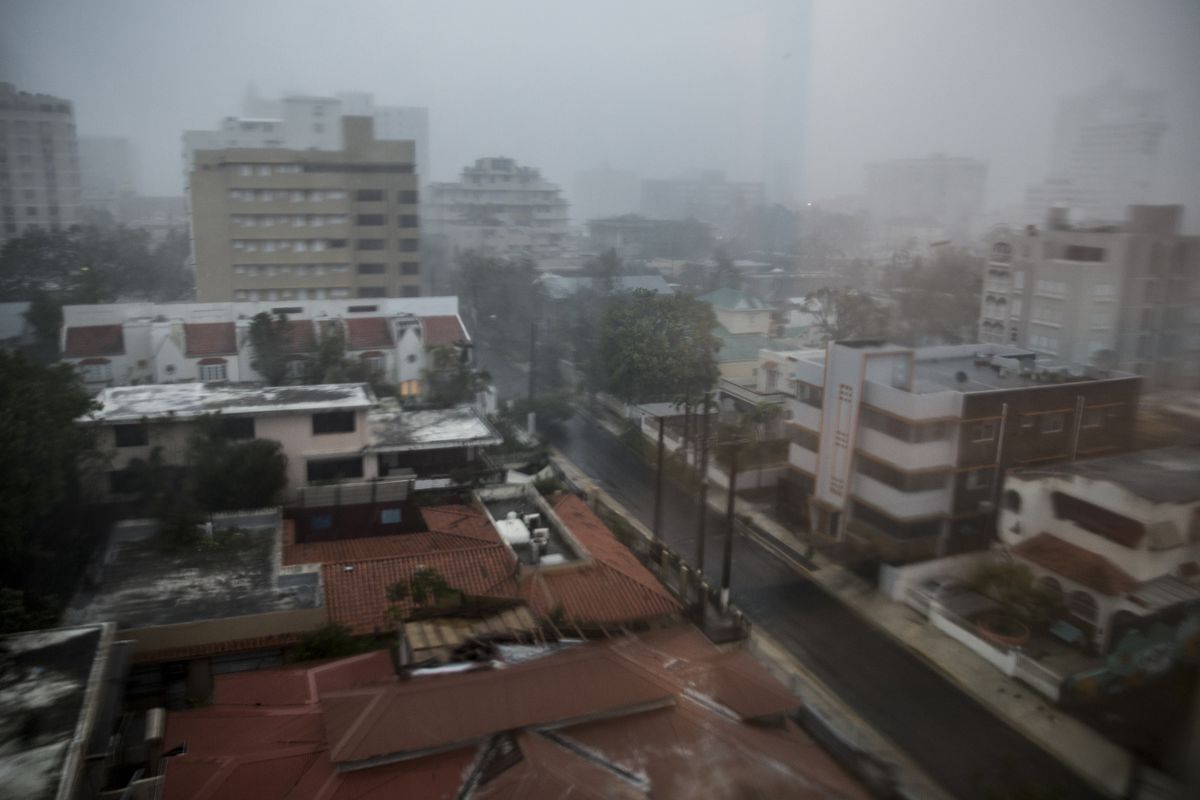 “President Trump praised FEMA and the Department of Homeland Security for “lifesaving and life-sustaining” work in the islands, and he sent his thoughts and prayers to “all those in harm’s way.”

“”The federal recovery effort, FEMA administrator Long said, will attempt to restore power to Puerto Rico and the U.S. Virgin Islands as quickly as possible but in a way that makes the grid less vulnerable to similar disruptions. The power grid, he said, “is a fragile system in both territories. It’s going to be a long and frustrating process to get the power grid up.”

“In the lobby of Ciqala Luxury Home Suites in Miramar, a neighborhood in San Juan, Maria Gil de Lamadrid waited with her husband as the rain and wind pounded the hotel’s facade. The door of the hotel’s parking garage flopped violently in the wind.”

“Gil de Lamadrid had spent the night in the hotel after evacuating her nearby 16th floor waterfront apartment. But even in a luxury hotel room, Gil de Lamadrid could not evade flooding. On Wednesday morning (9/20/17), water began seeping into her room through the balcony doors.”

“For me, it’s an adventure,” he said. “Something to talk about.”

“By mid-afternoon, the gusts had become less frequent, and lashing rains had eased. Soon residents emerged to survey the damage from a storm for the ages. Some walked dogs.”

“The hotels, they lost all the windows, they had structural damage even on concrete,” reported Dennis M. Rivera Pichardo, a freelance photographer working for The Washington Post, as he surveyed the tourist area of San Juan. “Trees are without a single leaf.”

“In Miramar, residents began clearing the roads of larger trees. One man walked down the street wearing only a T-shirt, shorts and a fedora hat, beaming despite the rain. “I was bored,” he said.”