I live in the Tampa Bay area and am grateful that Hurricane Irma hit our area mid September 2017 at a weakened 1 level. This event was followed by the widest power outage in Florida’s history. Too many folks were without power for days in the Florida heat. Peoples are questioning their lawmakers as to what would have happened if Hurricane Irma had been at level 4 or 5 which was a real possibility?

Of the numerous utility companies operating in Florida, the power company with the worst record of returning power to its consumers, has been Duke Energy.

“They have many questions about the strength of local power utilities’ infrastructure and failing communication systems that forced angry residents to report the same outages multiple times before getting help.”

“Much of residents’ ire during and after the storm was directed at Duke Energy, the main provider in Pinellas County, where roughly 400,000 customers were left in the dark last week.”

“I’m very concerned about the outages and the process that took place,” said state Rep. Chris Sprowls, R-Palm Harbor, who was named to a special House committee that will look at hurricane preparedness after Irma. “I intend to ask a lot of difficult questions.”

“Sen. Jack Latvala, a Clearwater Republican running for governor, vowed to not take any more money from the electric utilities until they strengthen the power grid.”

“In this cycle,” he said, “I’m done taking money from them.”

“A Duke Energy spokeswoman defended the company’s efforts to prepare for a major storm, saying it has spent $2.4 billion on hardening the grid since the last major hurricanes hit Florida in 2004 and 2005.”

“Duke Energy Florida President Harry Sideris admitted that the company’s automated system broke down during Irma, leading workers to manually (and less reliably) track outages and restoration times. At a news conference Tuesday in St. Petersburg, he said Irma was a “monster” for Duke, causing 1.3 million outages statewide, more than the company anticipated.”

“We understood that people are frustrated,” he said. “Power is such a vital piece of everybody’s life, and when it’s 93 degrees and you have no air conditioning, everybody gets frustrated.”

“”Electric companies called in thousands of out-of-state workers and fleets of trucks to restore service to more than 6 million customers after Irma raked the state Sept. 10. Few people found fault with the physical response, and many praised line crews for working long shifts.”

“It was a pretty massive effort that they put forth,” Pinellas Commissioner Janet Long said. “The best we can do is the best we can do, and after that everything else is in the hands of God.”

“In many ways, Irma spared Tampa Bay, its winds weakening as it moved over land toward Lakeland. Some wonder just how bad the power situation could have been if the hurricane remained a Category 4 or 5 storm.”

“It kind of settled down to a Category 1 by the time it got here, and it (still) knocked out almost 80 percent of the power in Pinellas County,” said St. Petersburg City Council chair Darden Rice.”

“Tens of thousands of customers were without electricity about five days after the storm. “We saw people got through the first three or four days just fine,” Rice said, “but after that people started getting restless, and we deserve to have our questions answered.”

“Duke vowed that all Pinellas customers would have power back by midnight Friday but did not meet that mark, sparking frustrated social media posts from St. Petersburg Mayor Rick Kriseman. He said he was “extremely disappointed” that the company failed to meet its self-imposed deadline and called it “irresponsible” for Duke to “give false hope to residents in need.”

It was irresponsible for Duke Energy to set a deadline and give false hope to residents in need https://www.facebook.com/Kriseman/posts/1711350702209323 …#StPeteRecovers

“Like Kriseman, U.S. Rep. Gus Bilirakis posted to his Facebook page, gathering comments to understand where the worst outages remained as the week dragged on.”

“Though regulation of utility companies falls primarily in the jurisdiction of the state, I will be meeting with all of these companies following the completion of hurricane recovery to analyze the problems that occurred and discuss future improvements that are needed,” (said) Bilirakis, a Palm Harbor Republican.”

“State Sen. Darryl Rouson, D-St. Petersburg, said Duke Energy “did the best they could,” communicating with customers after the storm but “they were juggling different balls in the air at the same time.””

“I’m not one to beat up. I’m one to say what can we do better,” Rouson said. But he acknowledged there’s an “appetite in the legislature to bring power companies to Tallahassee” for questioning in the coming months.”

“Pinellas Commissioner Ken Welch, who spent 14 years working at Florida Power Corp., which was bought out and is now part of Duke Energy Florida, said he has already proposed the Commission add the electrical grid to its legislative package.” 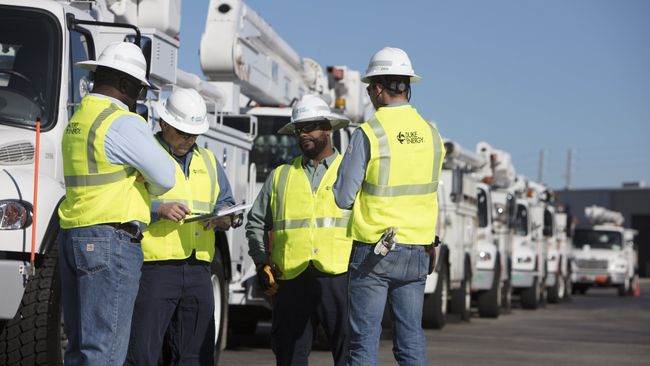 “One subject that promises to get a lot of discussion is “undergrounding” — burying overhead power lines instead of leaving them exposed to the wind and falling trees. Many residents get gas, for instance, from underground pipes.”

“We’ve never lost gas service during any storm, and I’ve been here for 20-plus years in this house,” said Welch, who went without electricity after the hurricane.”

“Latvala said he visited Duke’s control center and looked at their live outage maps after the storm. The areas that fared better had buried power lines, he said.”

“We really need to start emphasizing putting more of our utilities underground and strengthening the grid,” Latvala said.”

“Sideris, the Duke Energy Florida president, confirmed 9/19/17 that the company plans to expand its effort to bury wires but did not offer any details.”

“Energy companies are overseen by the Florida Public Service Commission, a group that critics say is largely beholden to the industry it is supposed to regulate.”

“The PSC holds hurricane preparation workshops with utility providers, including Duke Energy, each spring. An agency spokeswoman could not say Tuesday if the Commission would hold additional meetings this fall specific to Hurricane Irma and the unprecedented outages the storm caused.”

“We are focused on the utilities’ safely restoring power to their customers at this time,” said PSC spokeswoman Cindy Muir. “Restoration is still in progress.”