Even though the bottom 20% do receive tax relief in the form of $60 dollars, they are left much worse off because those at the bottom are the ones who’ll be losing access to Medicaid via (ACA) the Affordable Care Act/ Obamacare or the ACA in those states that did not participate in Medicaid Expansion plans allowed under the ACA. This situation occurs because republicans plan to end the Obamacare Mandate which requires everyone to have healthcare insurance or pay a fine. This allows the republicans to have access to $300 + billion more dollars in savings that they can use towards their 2017 Donor Relief Act or their tax cut for the rich. But this is at the expense of 13 million folks loosing access to affordable healthcare insurance while increasing average folks insurance premiums by 10%. This amendment drives a stake into the heart of Obamacare/ (ACA) Affordable Care Act.

The Senate Republican tax plan gives substantial tax cuts and benefits to Americans earning more than $100,000 a year, while the nation’s poorest would be worse off, according to a report released Sunday by the nonpartisan Congressional Budget Office.

Republicans are aiming to have the full Senate vote on the tax plan as early as this week, but the new CBO analysis showing large, harmful effects on the poor may complicate those plans. The CBO also said the bill would add $1.4 trillion to the deficit over the next decade, a potential problem for Republican lawmakers worried about America’s growing debt.

Democrats have repeatedly slammed the bill as a giveaway to the rich at the expense of the poor. In addition to lowering taxes for businesses and many individuals, the Senate bill also makes a major change to health insurance that the CBO projects would have a harsh impact on lower-income families. “The main reason the poor get hit so hard in the Senate GOP bill is because the poor would receive less government aid for health care.”

“Many of the people who are likely to drop health insurance have low or moderate incomes. If they drop health insurance, they will no longer receive some tax credits and subsidies from the government. The Joint Committee on Taxation (JCT), the other official nonpartisan group that analyzes tax bills,put out a similar report showing how lower-income families are hurt by the loss of the health-care tax credits. But the CBO goes a step further than the JCT. The CBO also calculates what would happen to Medicaid, Medicare and the Basic Health Program if the Senate GOP plan became law. The CBO is showing even worse impacts on poor families than the JCT did.”

“Republicans, including Senate Finance Committee Chairman Orrin G. Hatch (R-Utah), have argued that their bill helps Americans across the income spectrum. They say the JCT and CBO analyses are misleading because buying health insurance is a choice. If an individual or family no longer wants to do it, then that is their decision. They also argue that lower-income families are not losing any money in their wallets.”

“But Democrats and advocates for the poor say these lower-income Americans are going to be worse off if they no longer have health insurance.” 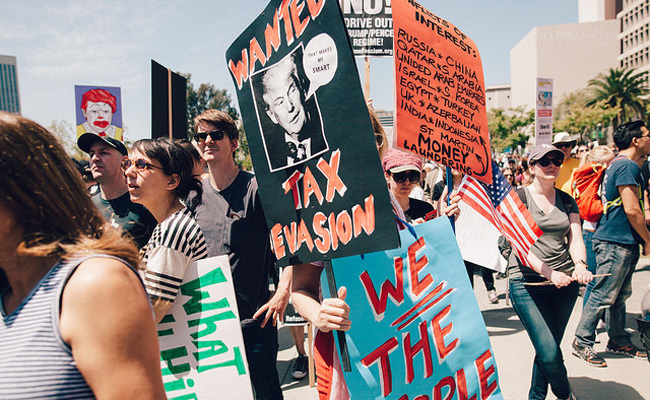 “Senate Republicans asked the JCT to calculate what happens to families across the income spectrum if only the tax impacts of the Senate bill are taken into account (so assuming zero impacts from the individual mandate repeal). The JCT sent the table below to Senate Republicans. It shows that all income groups — including people earning less than $30,000 — receive a tax cut.”

“But that changes in 2027 because the Senate GOP bill currently allows theindividual tax cuts to expire in 2026. In 2027, people earning less than $75,000 would end up paying more, according to the JCT. Republicans say Congress will likely extend those cuts, but that counts on future lawmakers taking action.” Source: JCT report for Senate Republicans showing the distributional effects of the Senate GOP tax plan without any changes to health care.