aside How Can It Be That Many Corporations Like Procter And Gamble Pay Zero Taxes? 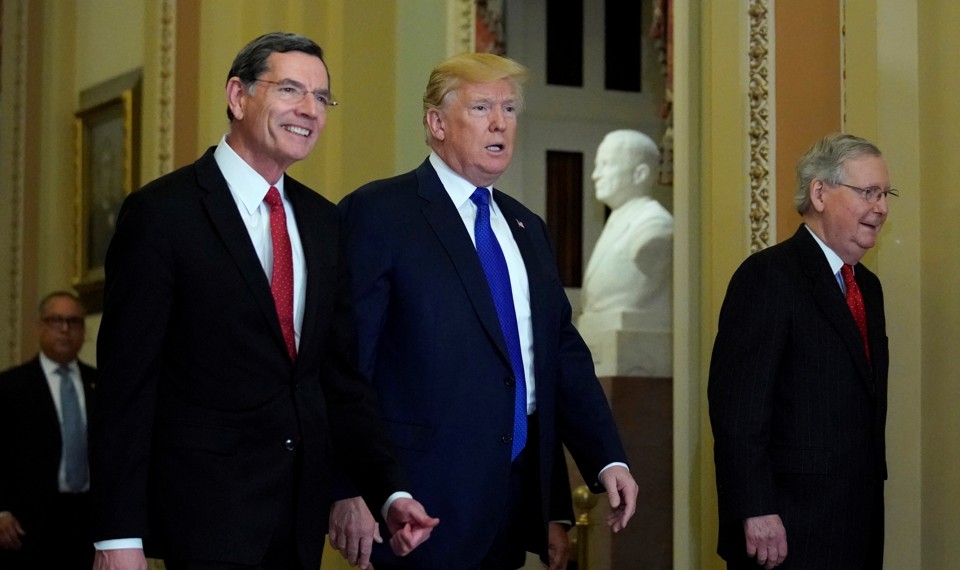 The below reporting blows to smithereens the argument by the republicans in the US Congress and the republican President Donald Trump, that corporations tax rates need to be lowered to be competitive with companies around the world.

ITEP (Institute on Taxation and Economic Policy) has published a report on its study where it does provide recommendations to be considered when drafting future tax reform legislation.

But the question remains, if the level of taxation is so high, why have so many companies’ income tax bills added up to zero?

On March 9, 2017, ITEP published the following report on its study, “The 35 Percent Corporate Tax Myth”

“Profitable corporations are subject to a 35 percent federal income tax rate on their U.S. profits. But many corporations pay far less, or nothing at all, because of the many tax loopholes and special breaks they enjoy. This report documents just how successful many Fortune 500 corporations have been at using loopholes and special breaks over the past eight years. As lawmakers look to reform the corporate tax code, this report shows that the focus of any overhaul should be on closing loopholes rather than on cutting tax rates.”

“It’s important to note a key piece of this report’s methodology. The report only includes corporations that were consistently profitable over the eight-year period from 2008 to 2015. In other words, if a firm had a loss in even one year, it is excluded from this report. By leaving out corporations that had losses (which means they wouldn’t pay any tax), this report provides a straightforward picture of average effective tax rates paid by our nation’s biggest and consistently profitable companies. Two hundred and fifty-eight Fortune 500 companies were consistently profitable in each of the eight years between 2008 and 2015. Most of these companies were included in our February 2014 report, The Sorry State of Corporate Taxes, which looked at the years 2008 through 2012. There are new companies in the report, including Netflix, which entered the Fortune 500 after 2013. In addition, some companies were excluded from the study because they lost money in 2013, 2014 or 2015.”

“These findings refute the prevailing view inside the Beltway that America’s corporate income tax is more burdensome than the corporate income taxes levied by other countries, and that this purported (but false) excess burden somehow makes the U.S. “uncompetitive.”

“For the first time in more than three decades, comprehensive corporate tax restructuring is a serious possibility in Washington. Republican leaders in Congress and President Donald Trump have each put forward corporate tax plans that would cut the corporate tax rate by as much as half. This misguided consensus is largely the result of a long-term aggressive push by corporate lobbyists on Capitol Hill to reduce the federal corporate income tax rate, based on the claim that our corporate tax is uncompetitive and high compared to other developed nations.”

“This study takes a hard look at federal income taxes paid or not paid by 258 of America’s largest and most profitable corporations in the eight years between 2008 and 2015 — and compares those tax payments to the foreign taxes that a multinational subset of these same companies pay on their activities in the rest of the world. The companies in our report are all from Fortune’s annual list of America’s 500 largest corporations, and all of them were profitable in the United States in each of the eight years analyzed. Over eight years, the 258 companies in our survey reported total pretax U.S. profits of more than $3.8 trillion.”

“While the federal corporate tax law ostensibly requires big corporations to pay a 35 percent corporate income tax rate, the 258 corporations in our study on average paid slightly more than half that amount: 21.2 percent over the 2008 to 2015 period. Many companies paid far less, including 18 that paid nothing at all over the entire eight-year period.”

“We also find that for most of the multinationals in our survey — companies that engage in significant business both in the United States and abroad — the U.S. tax rates these companies paid are lower than the rates they faced abroad. More than half of the multinationals in our survey enjoyed lower U.S. tax rates on their U.S. profits than the foreign tax rates they paid on their foreign profits.”

“There is wide variation in tax rates paid by the companies surveyed. A quarter of the companies in this study paid effective federal income tax rates on their U.S. profits close to the full 35 percent official corporate tax rate. But almost one-fifth paid less than 10 percent. One hundred of these profitable companies found ways to zero out every last dime of their federal income tax in at least one year during the eight-year period.”

“There is plenty of blame to share for today’s sad situation. Corporate apologists will correctly point out that loopholes and tax breaks that allow corporations to minimize or eliminate their income taxes are generally legal, and stem from laws passed over the years by Congress and signed by various presidents. But that does not mean that low-tax corporations bear no responsibility. The tax laws were not enacted in a vacuum; they were adopted in response to relentless corporate lobbying, threats and campaign support.”

The good news is that the corporate income tax can be repaired. The parade of industry-specific and even company-specific tax breaks that weaken the corporate tax can — and should — be repealed. This includes tax giveaways as narrow as the NASCAR depreciation tax break and as broad as the manufacturing deduction. High-profile multinational corporations that have shifted hundreds of billions of their U.S. income into tax havens for tax purposes, without engaging in any meaningful activity in those tiny countries, will stop doing so if Congress acts to end indefinite deferral of U.S. taxes on their offshore profits. ”

“This study is the latest in a series of comprehensive corporate tax reports by Citizens for Tax Justice and the Institute on Taxation and Economic Policy, beginning in 1984. Our most recent prior report, issued in 2014, covered corporate taxes in 2008 through 2012. The methodological appendix at the end of the study explains in more detail how we chose the companies and calculated their effective tax rates. The notes on specific companies beginning on page 56 add more details.”

“On paper at least, federal tax law requires corporations to pay 35 percent of their profits in federal income taxes. In fact, while some of the 258 corporations in this study did pay close to the 35 percent official tax rate, the vast majority paid considerably less. And some paid nothing at all. Over the eight years covered by this study, the average effective tax rate (that is, the percentage of U.S. pretax profits paid in federal corporate income taxes) for all 258 companies was only 21.2 percent.”

“The table on this page summarizes what the 258 companies paid (or didn’t pay) in effective U.S. income tax rates on their pretax U.S. profits.”

• “Even worse is that 18 companies paid less than 0 percent over the eight-year period. Their effective tax rate averaged -4 percent.”

•” 66 companies (about a quarter of the companies in this report), paid effective eight-year tax rates of more than 30 percent. Their average effective tax rate was 33.6 percent.” “During the 2008-2015 period, eight-year effective tax rates for the 258 companies ranged from a low of -27.9 percent for PEPCO Holdings to a high of 47.3 percent for Molina Healthcare. Here are some startling statistics: ”

•” 100 of the 258 companies paid zero or less in federal income taxes in at least one year from 2008 to 2015. Fifty-eight of these companies enjoyed multiple no-tax years, bringing the total number of no-tax years to 246. In the years they paid no income tax, these 100 companies earned $336 billion in pretax U.S. profits. But instead of paying $118 billion in federal income taxes, as the 35 percent corporate tax rate requires, these companies generated so many excess tax breaks that they reported negative taxes (often receiving tax rebate checks from the U.S. Treasury), totaling $32.1 billion. These companies’ “negative tax rates” mean that they made more after taxes than before taxes in those no-tax years.[1] THE SIZE OF THE CORPORATE TAX SUBSIDIES

“Over the 2008 to 2015 period, the 258 companies earned more than $3.8 trillion in pretax profits in the United States. Had all of those profits been reported to the IRS and taxed at the statutory 35 percent corporate tax rate, then the 258 companies would have paid $1.3 billion in income taxes over the eight years. But instead, the companies as a group paid just more than 60 percent of that amount. The enormous amount they did not pay was due to hundreds of billions of dollars in tax subsidies that they enjoyed.”

• “More than half of the total tax-subsidy dollars over the eight years — $286 billion — went to just 25 companies, each with more than $5.4 billion in tax subsidies.”

•” AT&T topped the list of corporate tax-subsidy recipients, with more than $38 billion in tax subsidies over the eight years.”

TAX RATES (AND SUBSIDIES) BY INDUSTRY

“The effective tax rates in our study varied widely by industry. From 2008 to 2015, effective industry tax rates (for our 258 corporations) ranged from a low of 3.1 percent to a high of 32.7 percent.”

• “Gas and electric utility companies enjoyed the lowest effective federal tax rate over the eight years, paying a tax rate of only 3.1 percent. This industry’s taxes declined steadily over the eight years, from 12.8 percent in 2008 to1.8 percent in 2015. These results were largely driven by the ability of these companies to claim accelerated depreciation tax breaks on their capital investments. None of the 25 utilities in our sample paid more than half the 35 percent statutory tax rate during the 2008 to 2015 period.”

•” Only two of the industries surveyed paid an effective tax rate of 30 percent or more over the full eight-year period.”

The difference in tax rates between companies, even within the same industry, demonstrates how loopholes in our tax code can create huge economic distortions by giving some companies a tax advantage over their competitors.

“We also looked at the size of the total tax subsidies received by each industry for the 258 companies in our study. Among the notable findings:” •” 55 percent of the total tax subsidies went to just four industries: financial, utilities, telecommunications, and oil, gas & pipelines — even though these companies only enjoyed 35.5 percent of the U.S. profits in our sample.”

“It seems rather odd, not to mention highly wasteful, that the industries with the largest subsidies are ones that would seem to need them least. ”