The republicans in the US Congress have ironed out the differences in its two houses, the US Senate and the US House of Representatives to where both chambers are set to vote on the final work product of their tax cuts bill during the week of December 18, 2017. The republican President Donald Trump has publicly stated that he wants to pass this tax cut bill (2017 Donor Relief Act/ tax scam) as a Christmas present for the American peoples.

For those who are part of “the Resistance” it is time to man the phones, fax, tweet, email, send postcards to our US Congress legislators. Demand that lawmakers NOT pass their 2017 Donor Relief Act (republicans’tax cuts bill for the rich); and to object to the FCC ending the net neutrality protections.

Please call the FCC as well as your legislators to voice your displeasure at it ending “net neutrality” protections on 12/14/17:

The final reconciled tax cut bill as of 12/14/17 includes more of the Senate’s bill version. The changes include a slightly higher corporate tax rate of 21% versus the 20% figure; a lower top personal individual tax rate of 37% for the wealthiest Americans instead of the current figure of  39.6 %.

But the bill will still scale back some popular tax breaks like the “state and local tax deductions and the deduction of mortgage interest.

The agreement would allow taxpayers to continue to deduct high out-of-pocket medical expenses, and it would not tax the stipends that graduate college students receive.

Also included in the consensus bill is the Senate’s repeal of the Affordable Care Act mandate, a requirement that most Americans have health insurance or pay a penalty and the provision that opens the Arctic National Wildlife Refuge in Alaska to energy exploration.

The US Congressional leaders do not dare to have its members return home to face the wrath of their constituents without having first passed this very unpopular bill with just about everyone except the Donor class folks. A recent Quinnipiac poll found 61 percent of Americans saying that the bill would mainly help the rich, while just 24 percent said that it would be best for the middle class.

In the current tax cuts bill for the filthy rich and the corporations, the tax breaks are set in stone but the tax cuts for the rest of us have a time limit. So, for the first couple/ few years, the rest of us will see nominal tax breaks which eventually disappear. The republicans are well aware of this fact, but all have indicated that these disappearing tax cuts will be adjusted for at a later date. But there are no guarantees of this in their tax cut bill. In addition, if the tax cuts for the rest of us were to be extended/ permanent, the price tag for the tax cut would increase the US deficit by more than $1.5 trillion dollars. This is the figure imposed by the republicans during their budgeting process. In short, if it is determined that the bill adds more than $1.5 trillion dollars to the US deficit, then the republicans in the US Senate cannot allow for its passage by only a simple-majority 51 vote versus the typical requisite hurdle of 60+ votes.

As per the 11/15/17 Atlantic report, “Republicans readily acknowledged they only sunset the personal tax cuts to abide by Senate budget rules, which forbid the tax legislation from adding to the deficit after the first decade. They would need 60 votes, including at least eight from Democrats, to get around that. “We can make the individual side permanent,” Senator John Thune of South Dakota said. “All it takes is a few Democrats to help us do that.”

Could this rule explain why republican legislators were upset by the J.C.T. numbers indicating that abbot $1 trillion dollars will be added to the US deficit by 2027? All the credible tax analysts have confirmed that the republicans’ tax cut bill does not pay for itself with increased revenues.

You’ll notice that the republicans are mum on the “PAYGO” statute passed in 2010. The pay-as-you-go rule, also known as PAYGO, was designed to make Congress offset the cost of any legislation that increases spending on entitlement programs or reduces revenues so it doesn’t expand the deficit. Under PAYGO, Congress must pay for such legislation by reducing other entitlement spending or increasing other revenues. This bill automatically increases the US deficit as per every credible economic tax analyst which means that the entitlement cuts are coming.

Thus, why are republicans in the US Senate not being formally challenged on this by their democratic counterparts, to where they are required to pass their bill with a 60+ majority vote.

Senate Republicans’ $1.5 trillion tax cut would not pay for itself, according to a report released recently by the nonpartisan Joint Committee on Taxation. The report is a significant setback for Republicans, who have asserted that the tax cuts would grow the economy enough to cover the cost of the plan. (In addition, $1 trillion dollars would be added to the US deficit.) 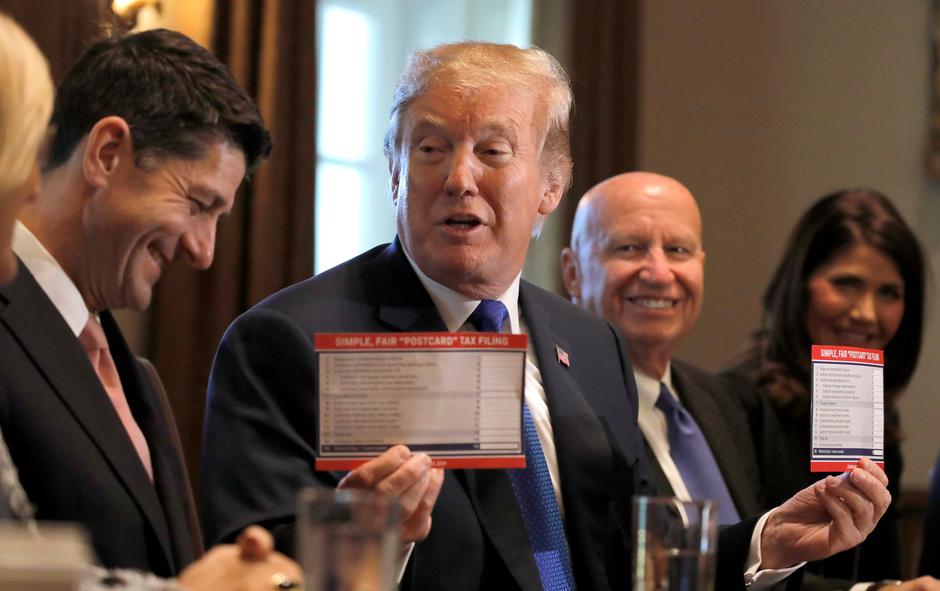 “In the Congressional Budget Office’s analysis of the Senate tax bill, the cuts would add $1.414 trillion to the deficit by 2027. That estimate does not include the amount that would be offset by the economic growth spurred by tax cuts.”

“Some Senate Republicans have expressed concerns about the bill’s deficits. Senator Bob Corker of Tennessee pushed to include in the final legislation some kind of safeguard that would trigger automatic tax increases or spending cuts if economic growth fails to cover the cost. But the provision was determined to run afoul of budget rules by the Senate parliamentarian on Thursday.”

Will the Tax Cut Pay for Itself:

“In a 2018 budget blueprint passed by Congress, lawmakers allowed enough room to lose about $1.5 trillion in revenue, but Republicans have said that the proposed tax legislation is designed to “pay for itself.”

“They have argued that economic growth spurred by the cuts would make up for the difference in tax revenue, eventually reducing the deficits.”

“To measure the macroeconomic effects of the Senate tax plan, economists have calculated estimates both with and without factoring in economic growth caused by the cuts.”

“For the Senate version of the tax plan, estimates vary widely across the Joint Committee on Taxation, the University of Pennsylvania’s Penn Wharton Budget Model and the conservative Tax Foundation, whose models tend to assume large growth effects. But all three analyses show that even when factoring in economic growth, the tax bill would not pay for itself.”

“Estimates for the House version of the plan, which passed with 227 Republican “yes” votes on 11/16/17, also vary widely, but each shows the bill would cost more than $1 trillion even when accounting for economic growth. “

“The Senate Finance and Budget committees’ quick approval of a major tax cut enables Trump and the Republican leadership’s plan to give colossal tax breaks to corporations and the wealthy. Our elected officials are cavalierly ignoring the wishes of the American people and setting the nation on a damaging path that will redistribute wealth upward, balloon the deficit and starve the federal government of resources necessary to meet basic priorities.”

Lawmakers like this tax plan, but their constituents don’t.

“A FiveThirtyEight news report released Wednesday confirms that the plan barreling its way through Congress (without so much as a single public hearing) is historically unpopular when compared to other tax cuts dating back to the Reagan Administration. In fact, the current plan to cut taxes is more unpopular than were tax hikes in 1993 under President Clinton.”

“In other words, in spite of a well-funded misinformation campaign that seeks to convince low- and middle-income taxpayers that top-heavy tax cuts will benefit them, the vast majority of people are rejecting the Republican leadership’s snake oil. It doesn’t take a tax wonk to identify dubious trickle-down economic promises.”

“Multiple independent analyses of the proposals moving forward in the House and Senate (ITEP, TPC, and JCT) have revealed both plans would shower the greatest benefits on the top 1 percent, albeit to differing degrees. These analyses are evidence enough that lawmakers seek to boost the fortunes of the already rich at the expense of the rest of us, but the Senate’s path forward is unabashed proof that working people are at most an after-thought.”

“Senate tax writers repealed the individual health mandate established under the Affordable Care Act (Obamacare) to help pay for a tax cut for corporations and the rich. This is crude and immoral, no matter how insistently lawmakers claim that destabilizing health care markets by removing one pillar of a three-legged stool would provide “choice” to people who do not want to purchase insurance.”

“It’s obvious their goal isn’t to provide “choices” that would increase access to health care. Rather, it’s a cynical, political calculation. They are betting that repealing the mandate would cause a significant number of lower-income people to forego signing up for health insurance and, thus, the federal government would save north of $300 billion over 10 years in subsidies to help resource-limited families pay for health care. A CBO analysis of the plan estimated 13 million people could lose health coverage as a result of this provision. But don’t worry. The $300 billion saved would help finance tax cuts for the rich.”

“There are a few token provisions in the Senate bill to make it palatable for more moderate Republicans such as an expansion of the child tax credit. Sens. Marco Rubio and Mike Lee proposed an amendment to make this provision more robust and to pay for it by lowering the corporate tax rate to 22 percent instead of 20 percent. Such a provision would do little to change the plan’s overwhelming tilt toward the wealthiest Americans. But throwing these few crumbs to working people is apparently too much for anti-tax advocates and their congressional allies to bear. Americans for Tax Reform, a Koch-brothers funded anti-tax group, released a statement claiming that a corporate tax rate of 22 percent would “hinder economic growth.”

“ITEP’s analysis of the Senate plan reveals that typical taxpayers in every income group except the top 1 percent would face a tax increase during the later years of the plan. That’s right. This so-called middle-class tax cut would become a working people’s tax hike during the next decade.”

“The House bill is different, but it still would redistribute wealthy to the already rich on an appalling scale.

“The richest 1 percent would receive 31 percent of the tax cut in the first year of the plan, and by the 2027, their share would grow to 48 percent for an average of more than $64,000 for the richest households. Meanwhile, the bottom 99 percent of taxpayers would receive a diminishing share of tax cuts. Furthermore, one in four households would face a tax hike during the later years of the House plan, with middle- and upper-middle-income families most likely to face a tax hike.”

“Treasury Secretary Steve Mnuchin and White House economic advisor Gary Cohn conceded earlier this year that some middle-class families would pay more. And Cohn later said that corporate CEOs are “most excited about the plan.” More than one lawmaker has said he is feeling pressure from “donors” to pass this plan. This is why, so far, no amount of public outcry has stopped this inferno from moving forward. Lawmakers have donors and corporate CEOs to placate.”