There is such a thing as using the Lord’s name in vain. For all those who use the religious holiday of Christmas to divide peoples and to exacerbate the culture wars which pits certain Christians against others of different faiths including other Christians who do not fall in line, they are using the Lord’s name in vain. The only War on Christmas is from the minds and mouths of Evangelicals who claim to be Christians but who are intent on dividing this country. They are NOT representing well the name of God and may very well be turning peoples away from a life lived in faith.

We are blessed to live in a country where peoples of different faiths are able to practice their beliefs in peace. We have been a country with a history that welcomes the stranger.

But there are those who are intent in taking the joy and good will to all out of the true meaning of Christmas Day by pointing fingers at others who dare to be different.

It is important to remind folks that God is not a Republican nor a Democrat.

Here is the rest of the story.

On December 24, 2017, Christina Maza of Newsweek penned the following report, “HOW TRUMP AND THE NAZIS STOLE CHRISTMAS TO PROMOTE WHITE NATIONALISM”

“Many of Trump’s Christian supporters argue that the president is ending the alleged “war on Christmas,” which has been presented by evangelicals and Fox news anchors as a threat to America’s Christian culture. Trump supporters say Americans have become too politically correct when they wish people happy holidays, a neutral term that can be used for people who celebrate Hanukkah, Eid, or any other religious holiday that takes place around the same time as Christmas.”

“But critics counter that Trump is promoting a version of the holidays that excludes members of other religions, and that his crusade to bring back Christmas is part of a larger attempt by the president to define America as a country for white Christians alone.”

“Wishing people “merry Christmas” instead of “happy holidays,” is thus in line with Trump’s decision to ban citizens of Muslim-majority countries from entering the United States, critics say. It fits neatly with his refusal to condemn white supremacists when they march against diversity, and with his condemnation of athletes who protest police brutality against black men.” 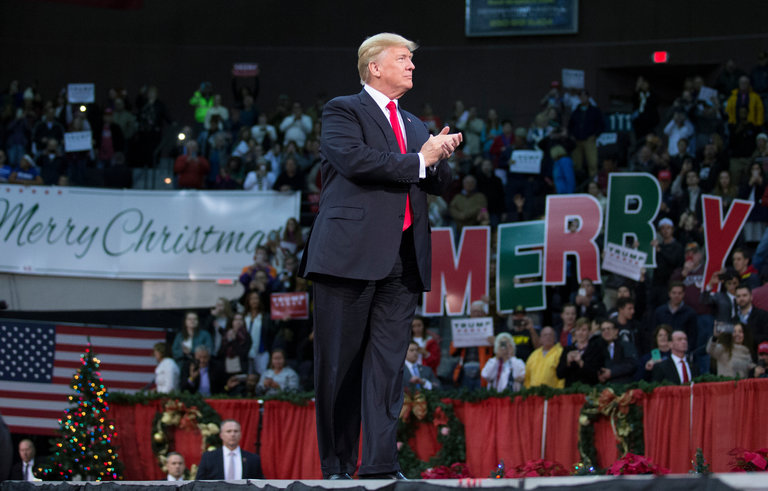 “With this in mind, the fight to end the war on Christmas is exclusionary politics at its most flagrant.”

“I see such invocations of Christmas as a kind of cypher, what some would call a dog whistle. It does not appear to be intolerant or extreme, but to attentive audiences it speaks volumes about identity and belonging—who and what are fully American,” Richard King, a professor at Washington State University who studies how white supremacists exploit culture, told Newsweek.

“Much like ‘Make America Great Again,’ panics over the protests by NFL players, and the defense of Confederate memory, Christmas is a way to talk about peril, to assert a soft or hard version of white nationalism.”

“Trump isn’t the first political figure in history to co-opt Christmas. In fact, some see parallels between Trump’s speeches in front of Christmas trees and attempts by authoritarian regimes like the Nazis to manipulate popular celebrations to promote a political ideology. But by weaponizing Christmas in this way, Trump is bringing a dangerous tradition of politicizing religious holidays into the United States, experts say.”

“Because Americans have enjoyed a relatively stable political system, Christmas in the U.S. has been relatively immune to the overt politicization of the holiday,” Joe Perry, author of the book Christmas in Germany: A Cultural History, which examines the way Nazis used Christmas to spread fascism, told Newsweek.”

“But not completely immune. The far right’s engagement in the ‘war on Christmas’ explicitly posits that there is one single true or correct Christmas. The holiday’s true nature is somehow under threat from outsiders and liberals who act as forces of degradation, multiculturalism and secularization,” Perry continued.”

“In this context, Trump has been using the so-called war on Christmas to wage a culture war that pits multicultural liberals against Christian conservatives. He began doing this long before Christmas. Meanwhile, members of the religious right support Trump’s most nationalist, race-baiting form of political rhetoric, including his re-claiming of Christmas.” “Likewise, Nazi Germany’s propagandists rooted their idea of Christmas in visions of ethno-nationalism. They rewrote the lyrics of Christmas carols, promoted Nazified holiday traditions and launched numerous Christmas charity events for poor Germans. The ultimate goal was to draw a clear line between those who belonged and those who should be excluded, those who could not benefit from the joys of Christmas.”

“Trump’s rhetoric differs from that of Nazi Germany’s, most notably because he has never advocated for genocide. But Trump’s talk about Christmas coexists with reemerging white identity politics, experts say.”

“Committed white nationalists love Trump’s bring back Christmas campaign almost as much as evangelicals,” Dr. Randy Blazak, a sociology professor who studies white nationalism, told Newsweek. “His followers see this as gospel and a rebuking of multiculturalism and political correctness, and the growing influence of Jews, Muslims, atheists and other non-WASPs.”