Note: This is an updated version of an earlier post.

Recently, a friend who was raised as a practicing Catholic shared with me her concern that Pope Francis has been promoting “one world government/ order” as described in the below 6/27/17 “Prophesy In The News” article. In the commentary, there was one reference from a credible source, the Guardian.

Here’s the link to the 6/16/15 Guardian article, “Pope Francis warns of destruction of Earth’s ecosystem.”

It seems like the following passage is what many conservative White Evangelicals have latched unto to twist and to attach a sinister connotation to the phrase “New World Order” to Pope Francis:

According to the leaked document, the pope will praise the global ecological movement, which has “already traveled a long, rich road and has given rise to numerous groups of ordinary people that have inspired reflection”.

As per a 9/1/16 Guardian report, “Pope Francis has called for urgent action to stop climate change and proposed that caring for the environment be added to traditional Christian works of mercy such as feeding the hungry and visiting the sick.”

“In a message to mark the Catholic church’s World Day of Prayer for the Care of Creation that he launched last year, Francis said the worst impact of global warming was being felt by those who were least responsible for it – refugees and the poor.”

“The pontiff used the occasion to revive many of the powerful issues he highlighted a year ago in his provocative encyclical on the environment, Laudato si’, and his latest message seems certain to rankle conservatives.”

“The pope said the faithful should use the Holy Year of Mercy throughout 2016 to ask forgiveness for sins committed against the environment and our “selfish” system motivated by “profit at any price”.

“We should not think that our efforts – even our small gestures – don’t matter,” he said. “Virtue, including ecological virtue, can be infectious.”

For now, here are excerpts from the June 27, 2017 “Prophesy In The News ” report showing examples of how conservatives are twisting the Pope’s words to discredit  him., “Pope Francis Calls For ‘One World Government’ To ‘Save Humanity:’ (This is what is being shared with Evangelical conservative Christians.)

“The Pope has argued that the creation of the one world government is needed to combat major issues such as “climate change.”

With the help of Pope Francis, world religious leaders did come together on June 14 to make a joint statement through a video calling on people to embrace ideas of friendship and unity, and to overcome negativity and division in society.”

“Israel, Islam, and End Times, ” has reported, Conservatives are using this constructive move to describe the Pope’s call for a world government. “This call for a woeld order is led by Pope Francis, Ayatollah Al-Milani, the Dalai Lama and Rabbi Abraham Skorka. This activity is being described as a major step on the road to the New World Order that was prophesied over 2,000 years ago.”

As demonstrated by above examples, climate change and the global warming hoax appears to be the global elite’s preferred method of scaremongering, as they attempt to shepherd humanity closer to unified totalitarian rule.”

In a rare move, major religious leaders ― from Pope Francis to the Dalai Lama ― issued a joint appeal Wednesday asking people to follow a simple bit of advice: Make friends with people of other faiths.”

“Our advice is to make friends to followers of all religions,” Ayatollah Sayyid Fadhel Al-Milani, one of the U.K.’s most senior Shia Muslim clerics, said in a video recording.

“Personal contact, personal friendship, then we can exchange a deeper level of experience,” the Dalai Lama said.

“Pope Francis chose to speak about his long friendship with the Argentinian Rabbi Abraham Skorka, who also appeared in the video. ”

“My religious life became richer with his explanations, so much richer,” Francis said of Skorka. “And I guess the same happened for him.”

“Make Friends” is an initiative of the Elijah Interfaith Institute, an interfaith organization with offices in Israel and the US. In a press release, organizers said the project’s mission is to counter the idea that people view each others’ religions with distrust or disdain ― and to potentially even reduce violence conducted in the name of religion.”

Pope Francis has taken a courageous stance on “climate change” by giving credence to the science regarding it being for real…This stance has angered many conservatives who are intent to promote their view, that the current scientific consensus about climate change is “fake news.”

As per the 10/24/ 2016 Guardian report, “In a nationally representative research survey of 2,755 individuals across the US, including more than 700 Catholics, researchers quizzed individuals on their attitudes towards climate change, its effects on the poor and papal credibility on the issue, together with questions on their political views and demographics such as age, sex and ethnicity.”

“But, the authors say, among both conservative Catholics and non-Catholics who had heard of the encyclical, the pontiff’s perceived credibility decreased as political leaning veered to the right.”

On October 3, 2017, Arthur Neslen of the Guardian penned the following article demonstrating how the pontiff has been aligning with other leaders to spread the warning about climate change being a serious issue,  “Catholic church to make record divestment from fossil fuels.”(This has nothing to do with creating a “one world order” or government.)

“More than 40 Catholic institutions are to announce the largest ever faith-based divestment from fossil fuels, on the anniversary of the death of St Francis of Assisi.”

“The sum involved has not been disclosed but the volume of divesting groups is four times higher than a previous church record, and adds to a global divestment movement, led by investors worth $5.5tn.” 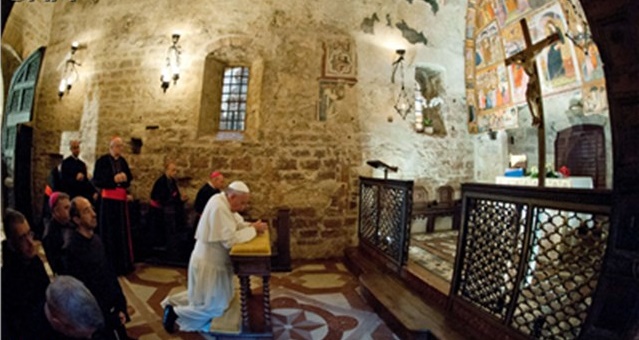 “Christiana Figueres, the former UN climate chief said: “I hope we will see more leaders like these 40 Catholic institutions commit, because while this decision makes smart financial sense, acting collectively to deliver a better future for everybody is also our moral imperative.”

“Church institutions joining the action include the Archdiocese of Cape Town, the Episcopal Conference of Belgium and the diocese of Assisi-Nocera Umbra-Gualdo Tadino, the spiritual home of the world’s Franciscan brothers.”

“In a symbolically charged move, the Italian town of Assisi will also shed all oil, coal and gas holdings the day before a visit by the Italian prime minister, Paolo Gentiloni, to mark St Francis’s feast day.”

“The origins of the latest church action lie in last year’s climate encyclical by Pope Francis – himself named after St Francis of Assisi.”

“A fake front page of the Vatican’s official newspaper was sent to cardinals and bishops by an anonymous source this week as part of what appears to be an ongoing campaign to undermine Pope Francis.”

“The page, obtained by NBC News, purports to be the front of the Osservatore Romano and contains a spoof interview with the 80-year-old pontiff under the headline in Italian, “He answered!”

“The fake news story comes a week after walls around Rome were festooned with illegal posters criticizing the pope’s actions.”

“The posters showed an image of a stern-looking Francis above the question: “Eh, Francis, you’ve commissioned congregations, removed priests, decapitated the Order of Malta and the Franciscan Friars of the Immaculate, you’ve ignored cardinals … but where’s your mercy?”

The war against Pope Francis | News | The Guardian 2015