aside President’s Schizophrenic Year Of Foreign Policy In Review

We of the “Coalition of the Decent,” the “Never Trumpers,”the Resistance participants including those of the “Women’s March, Indivisible and others, the democrats along with the majority of independents and a significant number of republicans, all knew that the world was set for a very rocky ride with the republican President Donald Trump at the helm.  But, it has been much worse than we could ever have imagined.

The Politico Magazine describes well this nightmare of a reality show of President Trump’s foreign policy delivery. As we and peoples around the world watch in horror the president’s recklessness in the area foreign policy, there have been those republican sycophants in the US Congress and the White House who have been enabling him without imposing adequate restrictions whatsoever to protect the peoples of the USA. They have turned there back to their oath of office, to protect this country. But what the heck, they were able to pass their coveted tax cuts bill in December 2017. (Footnoted below is a link to the entire article.)

Susan B. Glasser of the Politico Magazine penned the following report for the January/ February edition, “Donald Trump’s Year of Living Dangerously. It’s worse than you think.”

“When President Donald Trump sat down for dinner on September 18 in New York with leaders of four Latin American countries on the sidelines of the annual United Nations General Assembly, anxieties were already running high.”

“There was the matter of Mexico and his promise to build that “big, beautiful wall,” presumably to keep not just Mexicans but all of their citizens out of the United States too. And the threat to blow up the North American Free Trade Agreement. And then, a month earlier, seemingly out of nowhere, Trump had volunteered that he was considering a “military option” in Venezuela as that country’s last vestiges of democracy disappeared. Amid the international furor over his vow to rain down “fire and fury” on North Korea in the same golf-course press conference, the news that the president of the United States was apparently considering going to war with its third-largest oil supplier had gotten relatively little attention. But the leaders from Argentina, Brazil, Colombia and Panama invited to the dinner remembered it well.” 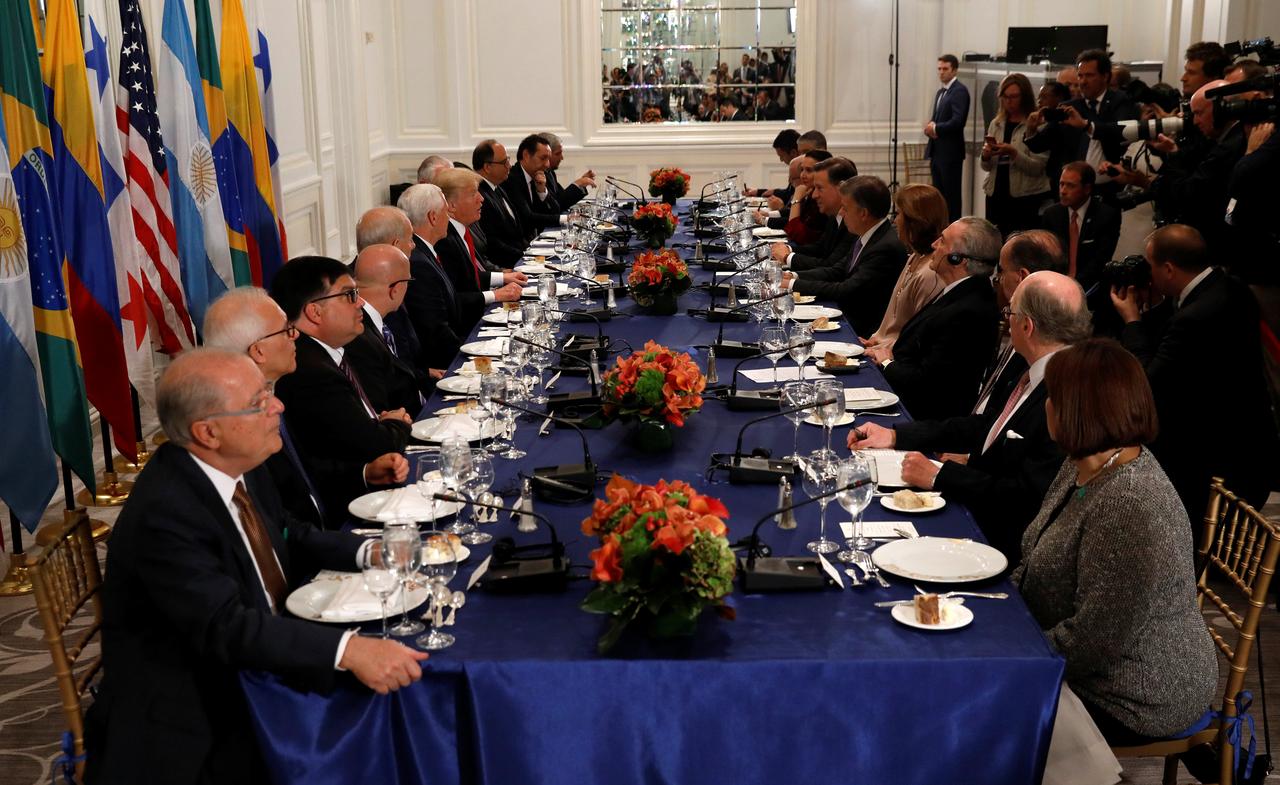 “So, it turned out, did Trump. After the photo op was over and the cameras had left the room, Trump dominated the long table. His vice president, Mike Pence, was to his right; Pence had just spent nearly a week on a conciliatory, well-received tour of the region, the first by a high-ranking administration official since Trump’s inauguration. To Trump’s left was his secretary of state, Rex Tillerson. “Rex tells me you don’t want me to use the military option in Venezuela,” the president told the gathered Latin American leaders, according to an account offered by an attendee soon after the dinner. “Is that right? Are you sure?” Everyone said they were sure. But they were rattled. War with Venezuela, as absurd as that seemed, was clearly still on Trump’s mind.”

“By the time the dinner was over, the leaders were in shock, and not just over the idle talk of armed conflict. No matter how prepared they were, eight months into an American presidency like no other, this was somehow not what they expected. A former senior U.S. official with whom I spoke was briefed by ministers from three of the four countries that attended the dinner. “Without fail, they just had wide eyes about the entire engagement,” the former official told me. Even if few took his martial bluster about Venezuela seriously, Trump struck them as uninformed about their issues and dangerously unpredictable, asking them to expend political capital on behalf of a U.S. that no longer seemed a reliable partner. “The word they all used was: ‘This guy is insane.’”

“Ever since Trump took the oath of office on January 20, the world has been taking his measure, trying to make sense of his “America First” foreign policy and what it means for them. Over the course of the year, Trump has traveled to 13 countries and met with “more than 100 world leaders,” as he bragged in a recent tweet. Many, like the Latin Americans who dined with him in September in New York or the Australian prime minister whom Trump snapped at in a phone call a little more than a week into his presidency, came away reeling from the encounter. Several others whom I’ve debriefed in recent months found Trump perfectly hospitable in private—while leaving with similarly scathing assessments of his volatility and lack of command of the facts. Some, like the Saudis and the Chinese, have wooed the disruptive new president with red-carpet fanfare and over-the-top flattery; others, like German Chancellor Angela Merkel, have combined simplistic charts and maps to press their case in private with public finger-wagging about Trump’s rejection of the norms of international diplomacy. All of them have anxiously pored through his Twitter feed for clues to America’s intentions, seeking the glimmerings of a Trump Doctrine in the president’s inflammatory, typo-ridden early morning pronouncements.

“The jarring reality of their encounters with Trump has at times been even more disturbing to America’s friends and allies than the initial news accounts have suggested. When he went to dinner with leaders from fellow NATO member states in May, for example, Trump had already given a speech that was being roundly criticized by allies for failing to reaffirm America’s normally unquestioned commitment to Article 5 of the NATO treaty, the mutual defense provision that is at the heart of the alliance Trump has called “obsolete.” And news was making the rounds of an equally disastrous private meeting he had earlier in the day in Brussels with the leaders of the European Union. But what was not reported at the time was that even after all of that, some European leaders came away most disturbed by what Trump said at their private dinner. “He was very tough and very outspoken in his intervention,” a European diplomat in attendance confirmed to me about the meal. Another European attendee said Trump at the dinner was “unlike anything they’ve ever heard” in such a setting. “All this bluster and blasting. He walks in and starts talking, breaking china all over the place.” And to top it off, Trump left early.”

“A year into Trump’s presidency, such accounts are no longer really surprising. Or at least they shouldn’t be. After all, his own secretary of state was reported to have called the president a “fucking moron”—a comment Tillerson has steadfastly refused to personally deny—and the chairman of the Senate Foreign Relations Committee, a member of Trump’s own party, has publicly broken with the president and warned that he might blunder his way into World War III. But just because we aren’t surprised doesn’t mean we shouldn’t still be at least a little shocked. The very fact of all these stunning interactions between this president and the rest of the world has to rank as an example, in and of itself, of what makes Trump’s presidency so exceptional.”

Here is the link to the entire article: Donald Trump’s Year of Living Dangerously – POLITICO Magazine/ 1/2/17