aside What Steve Bannon Has to Say About The Presidency Of Donald J. Trump Regarding Treason

Et tu, Steve Bannon. As of January 2018, there is one person who cannot be accused of continuing to carry the water for the republican President Donald J. Trump and this individual is none other than his former Chief Strategist Steve Bannon, as per his quotes detailed in his book, “Fire and Fury” by Michael Wolff.

Needless to say, I will be purchasing this book asap.

Let’s see if over the next few weeks, Sreve Bannon doesn’t back track somewhat on his less than flattering descriptions of President Trump and his administration. For example, Steve Bannon claims that there is no way that President Trump didn’t have knowledge of the June 9, 2016 infamous Trump Tower meeting with the attendees of Don Trump Jr., Jared Kushner, Paul Manafort and the Russian operatives, as he was present in the building at the same time. Mr. Bannon describes what happened at this meeting as treasonous.

This is blockbuster news, as both the president and Steve Bannon play with the same base. It is now Steve Bannon calling into question many of the president’s claims of innocence regarding Russian connections. 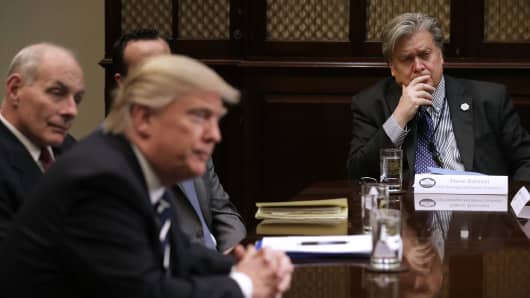 “Donald Trump’s former chief strategist Steve Bannon has described the Trump Tower meeting between the president’s son and a group of Russians during the 2016 election campaign as “treasonous” and “unpatriotic”, according to an explosive new book seen by the Guardian.”

“Bannon, speaking to author Michael Wolff, warned that the investigation into alleged collusion with the Kremlin will focus on money laundering and predicted: “They’re going to crack Don Junior like an egg on national TV.” 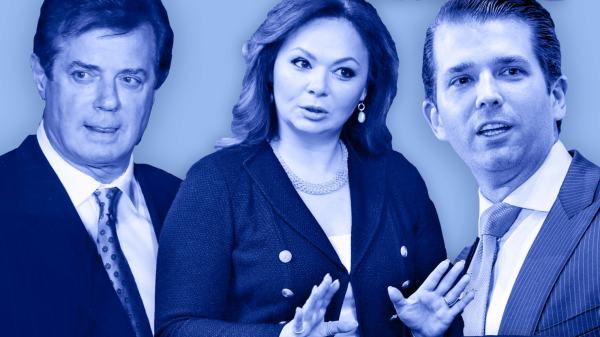 “Fire and Fury: Inside the Trump White House, reportedly based on more than 200 interviews with the president, his inner circle and players in and around the administration, is one of the most eagerly awaited political books of the year. In it, Wolff lifts the lid on a White House lurching from crisis to crisis amid internecine warfare, with even some of Trump’s closest allies expressing contempt for him.”

“Bannon, who was chief executive of the Trump campaign in its final three months, then White House chief strategist for seven months before returning to the rightwing Breitbart News, is a central figure in the nasty, cutthroat drama, quoted extensively, often in salty language.” 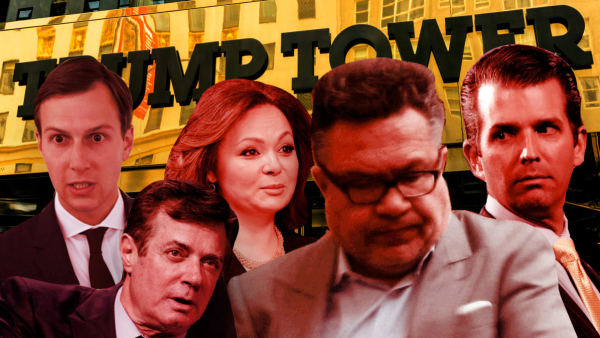 “He is particularly scathing about a June 2016 meeting involving Trump’s son Donald Jr, son-in-law Jared Kushner, then campaign chairman Paul Manafort and Russian lawyer Natalia Veselnitskaya at Trump Tower in New York. A trusted intermediary had promised documents that would “incriminate” rival Hillary Clinton but instead of alerting the FBI to a potential assault on American democracy by a foreign power, Trump Jr replied in an email: “I love it.”

“The meeting was revealed by the New York Times in July last year, prompting Trump Jr to say no consequential material was produced. Soon after, Wolff writes, Bannon remarked mockingly: “The three senior guys in the campaign thought it was a good idea to meet with a foreign government inside Trump Tower in the conference room on the 25th floor – with no lawyers. They didn’t have any lawyers.”

“Even if you thought that this was not treasonous, or unpatriotic, or bad shit, and I happen to think it’s all of that, you should have called the FBI immediately.”

“Bannon went on, Wolff writes, to say that if any such meeting had to take place, it should have been set up “in a Holiday Inn in Manchester, New Hampshire, with your lawyers who meet with these people”. Any information, he said, could then be “dump[ed] … down to Breitbart or something like that, or maybe some other more legitimate publication”.

“Special counsel Robert Mueller was appointed last May, following Trump’s dismissal of FBI director James Comey, to investigate Russian meddling in the 2016 election. This has led to the indictments of four members of Trump’s inner circle, including Manafort and former national security adviser Michael Flynn. Manafort has pleaded not guilty to money laundering charges; Flynn has pleaded guilty to lying to the FBI. In recent weeks Bannon’s Breitbart News and other conservative outlets have accused Mueller’s team of bias against the president.”

“Trump predicted in an interview with the New York Times last week that the special counsel was “going to be fair”, though he also said the investigation “makes the country look very bad”. The president and his allies deny any collusion with Russia and the Kremlin has denied interfering.”

“Bannon has criticised Trump’s decision to fire Comey. In Wolff’s book, obtained by the Guardian ahead of publication from a bookseller in New England, he suggests White House hopes for a quick end to the Mueller investigation are gravely misplaced.”

“You realise where this is going,” he is quoted as saying. “This is all about money laundering. Mueller chose [senior prosecutor Andrew] Weissmannfirst and he is a money-laundering guy. Their path to fucking Trump goes right through Paul Manafort, Don Jr and Jared Kushner … It’s as plain as a hair on your face.”

“Last month it was reported that federal prosecutors had subpoenaed records from Deutsche Bank, the German financial institution that has lent hundreds of millions of dollars to the Kushner property empire. Bannon continues: “It goes through Deutsche Bank and all the Kushner shit. The Kushner shit is greasy. They’re going to go right through that. They’re going to roll those two guys up and say play me or trade me.”

He insists that he knows no Russians, will not be a witness, will not hire a lawyer and will not appear on national television answering questions.

“Fire and Fury will be published next week. Wolff is a prominent media critic and columnist who has written for the Guardian and is a biographer of Rupert Murdoch. He previously conducted interviews for the Hollywood Reporter with Trump in June 2016 and Bannon a few months later.”

“He told the Guardian in November that to research the book, he showed up at the White House with no agenda but wanting to “find out what the insiders were really thinking and feeling”. He enjoyed extraordinary access to Trump and senior officials and advisers, he said, sometimes at critical moments of the fledgling presidency.”

“The rancour between Bannon and “Javanka” – Kushner and his wife Ivanka Trump – is a recurring theme of the book. Kushner and Ivanka are Jewish. Henry Kissinger, the former secretary of state, is quoted as saying: “It is a war between the Jews and the non-Jews.”

“Trump is not spared. Wolff writes that Thomas Barrack Jr, a billionaire who is one of the president’s oldest associates, allegedly told a friend: “He’s not only crazy, he’s stupid.”