aside Breaking News: FBI’s Deputy Director McCabe Is Stepping Down From Trump-Russian Probe

As per the 1/29/18 NY Times report“Andrew McCabe Steps Down at F.B.I. In Widely Expected Move”by Adam Goldman, “Andrew G. McCabe has stepped down as the F.B.I.’s deputy director, a move that was widely expected as he has repeatedly come under fire from Republicans in Congress and from President Trump.”

“An American official said Mr. McCabe made his intentions known on Monday. He will immediately go on leave and plans to retire when he becomes eligible in mid-March.”

We already knew that Mr. McCabe had planned to early retire, but it is the timing of this announcement that is suspect. As soon as more is known about the particulars of this event, it will be shared. 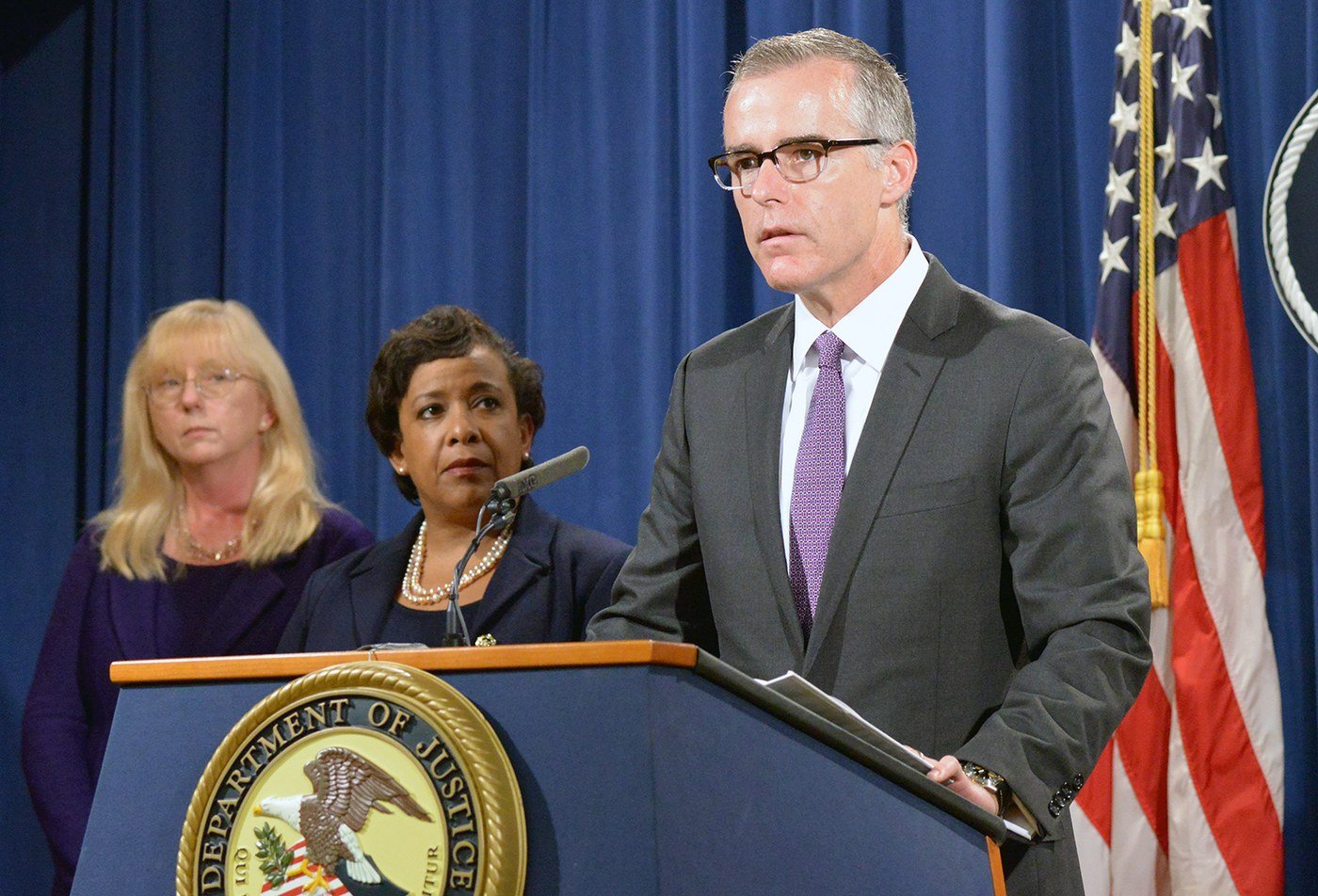 On January 29, 2018, Adam Goldman and Matt Apuzzo of of the New York Times penned the following report, “Taunted by Trump and Pressured From Above, McCabe Steps Down As FBI Deputy”

“Andrew G. McCabe abruptly stepped down on Monday (1/29/18) as the F.B.I.’s deputy director after months of withering criticism from President Trump, telling friends he felt pressure from the head of the bureau to leave, according to two people close to Mr. McCabe.”

“Though Mr. McCabe’s retirement had been widely expected soon, his departure was nevertheless sudden. It added to what has already been a chaotic upheaval at the F.B.I. under Mr. Trump, who has responded to an investigation into his campaign with broadside attacks against both the bureau and the Justice Department.”

“As recently as last week, Mr. McCabe had told people he hoped to stay until he was eligible to retire in several weeks. Instead, he will immediately go on leave and retire on March 18.”

“In a recent conversation, Christopher A. Wray, the F.B.I. director, raised concerns about a forthcoming inspector general report. In that discussion, according to one former law enforcement official close to Mr. McCabe, Mr. Wray suggested moving Mr. McCabe into another job, which would have been a demotion.”

“Instead, the former official said, Mr. McCabe chose to leave. In an email to F.B.I. employees, he said he was leaving with “sadness.” He praised his colleagues as “the greatest work force on earth because you speak up, you tell the truth and you do the right thing.”

“Agents and lawyers expect the report by the Justice Department’s inspector general, Michael E. Horowitz, to be highly critical of some F.B.I. actions in 2016, when the bureau was investigating both Hillary Clinton’s email use and the Trump campaign’s connections to Russia. The report is expected to address whether Mr. McCabe should have recused himself from the Clinton investigation because of his wife’s failed State Senate campaign, in which she accepted nearly a half-million dollars in contributions from the political organization of Terry McAuliffe, then the governor of Virginia, who is a longtime friend of Mrs. Clinton and her husband, former President Bill Clinton.”

“Mr. Trump fired the F.B.I. director, James B. Comey, who oversaw both investigations, last May, and has by turns cited Mr. Comey’s handling of the Clinton investigation and the Russia inquiry itself as the reason for his decision.”

“In a message on Monday afternoon to F.B.I. employees, Mr. Wray thanked Mr. McCabe for his service and said he would not comment on “specific aspects” of the inspector general’s review.”

“The White House said Mr. Trump, who had taunted Mr. McCabe on Twitter for months, had nothing to do with Mr. McCabe’s exit. “The president wasn’t part of this decision-making process,” said Sarah Huckabee Sanders, the White House press secretary, an assertion echoed by Mr. Wray.”

“Staff overhauls are common when new F.B.I. directors take office, but the president’s combative relationships with the bureau and the Justice Department have added commotion and unpredictability to what is more typically an orderly process. Mr. Trump’s public antipathy has also complicated the early tenure of Mr. Wray, whose every staffing decision now risks being seen as directed by the White House.”

“Underscoring the tumult, Mr. McCabe’s departure was not immediately announced at the bureau, leaving agents to learn of it from news reports. Mr. Wray named the bureau’s No. 3 official, David L. Bowdich, as his acting deputy, according to the director’s note to the F.B.I.”

“Mr. McCabe first drew Mr. Trump’s ire because his wife, Jill McCabe, ran for a State Senate seat in Virginia as a Democrat and received the donations from Mr. McAuliffe’s organization. Mr. McCabe did not become deputy director until after his wife was defeated, and records show that he disclosed her candidacy and sought ethics advice from senior F.B.I. officials.”

“Mr. Trump and his allies have sought to use Mrs. McCabe’s run for office as evidence that the Russia investigation was part of a Democratic-led effort to protect Mrs. Clinton and undermine Mr. Trump’s presidency. Republicans cheered Mr. McCabe’s departure and signaled that more change should be made.”

“By appointing Mr. McCabe in 2016, Mr. Comey was seen as valuing intellect and management over experience making cases. Mr. McCabe’s ascent sometimes rankled the workaday agents who believed he did not pay his dues. Mr. McCabe’s supporters regarded him as a new model for the F.B.I., which had transformed from a traditional law-and-order agency to a complicated intelligence-gathering operation.”

“He took on the role during one of the most tumultuous and politically charged periods in F.B.I. history. Mr. McCabe was at the center of the inquiries into both Mrs. Clinton’s use of a private email server and the Trump campaign’s connections to Russian intelligence officers. Republicans have also criticized the F.B.I. for recommending that Mrs. Clinton not be charged.”

“Among the actions being scrutinized by the inspector general is Mr. Comey’s highly unusual news conference during the presidential campaign when he criticized Mrs. Clinton’s handling of classified information, but cleared her of criminal wrongdoing. Many top F.B.I. officials were involved in that decision.” “The inspector general is also investigating two senior F.B.I. officials, Peter Strzok and Lisa Page, who exchanged texts in 2016 that were deeply critical of Mr. Trump. Mr. Strzok and Ms. Page were involved in both the Clinton case and the investigation into the Trump campaign.”

“In addition to Mr. McCabe, Mr. Wray has also replaced two other top aides. In December it was announced that James A. Baker, the F.B.I. general counsel, was moving into another role. Mr. Baker was a confidant of Mr. Comey’s and played a key role in the Clinton email investigation. This month, Jim Rybicki, chief of staff to Mr. Wray and Mr. Comey, said he was taking a job in the private sector.”