The below story reflects the harm that I believe is being done against the FBI and law enforcement in general by certain republicans in the US Congress who are are hard at work in their orchestrated plan to demonize and discredit institutions like the FBI and the US Department of Justice and any conclusions they subsequently make against the republican President Donald Trump. The president has been pushing with the very force of his will to shut down The FBI’s Trump-Russia inquiry into Russia’s interference in the 2016 US presidential elections and any part the president may have played with Russia deciding to back him to be president.

There is one FBI agent who is leaving the force just so he can fight back. 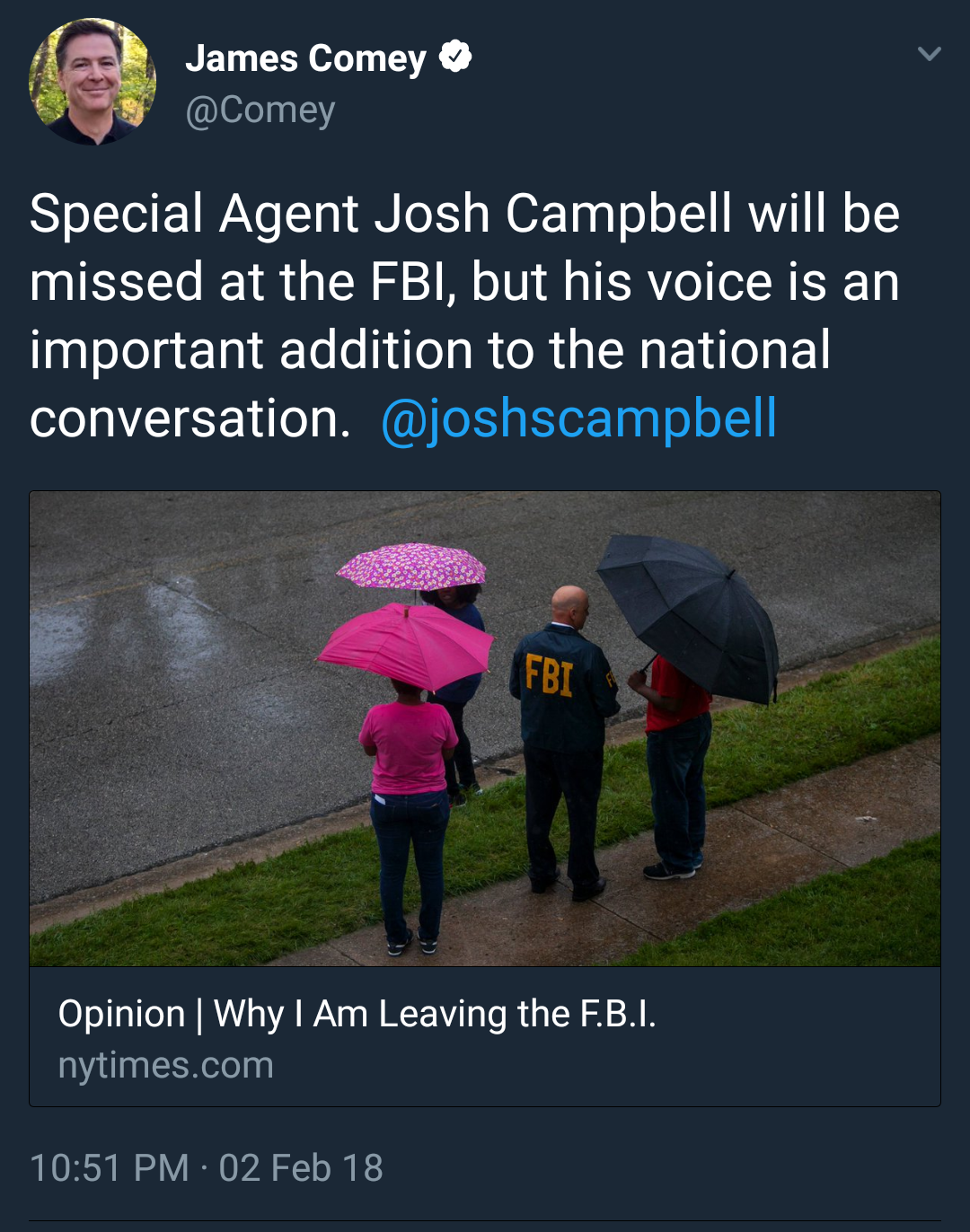 On February 2, 2018, Josh Campbell for the New York Times penned the following op-ed piece, “Why I Am Leaving the FBI”

“One of the greatest honors of my life was walking across the stage at the F.B.I. Academy and receiving my special agent badge from the director at the time, Robert Mueller. After 21 weeks of intensive training, my class swore an oath and became federal agents entrusted with the solemn duty of protecting Americans and upholding the Constitution.”

“After more than a decade of service, which included investigating terrorism, working to rescue kidnapping victims overseas and being special assistant to the director, I am reluctantly turning in my badge and leaving an organization I love. Why? So I can join the growing chorus of people who believe that the relentless attacks on the bureau undermine not just America’s premier law enforcement agency but also the nation’s security. My resignation is painful, but the alternative of remaining quiet while the bureau is tarnished for political gain is impossible.”

“A small number of my current and retired colleagues have said that we should simply keep our heads down until the storm passes. I say this with the greatest respect: They are wrong. If those who know the agency best remain silent, it will be defined by those with partisan agendas.”

“F.B.I. agents are dogged people who do not care about the direction of political winds. But to succeed in their work, they need public backing. Scorched-earth attacks from politicians with partisan goals now threaten that support, raising corrosive doubts about the integrity of the F.B.I. that could last for generations.” 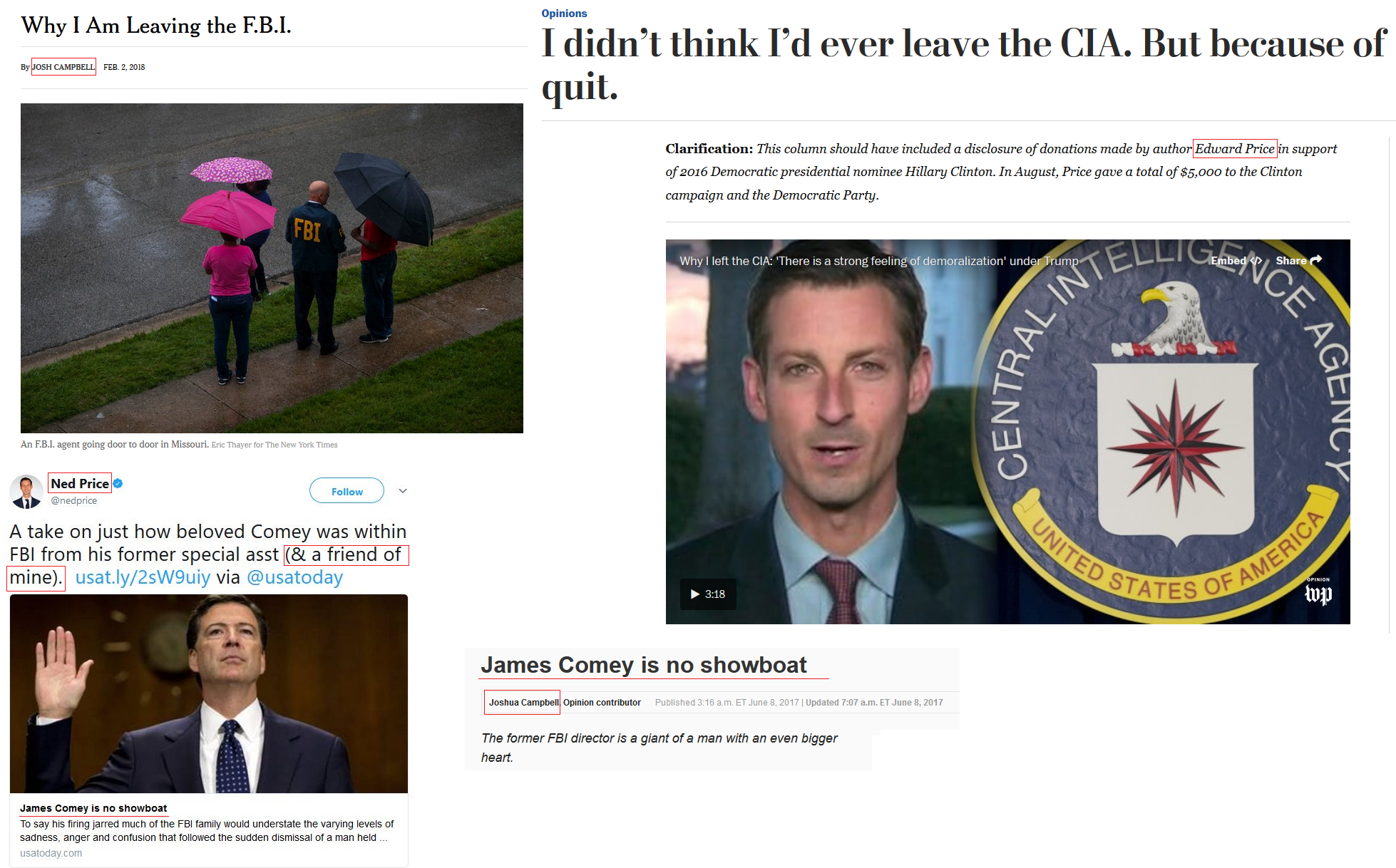 “When the F.B.I. knocks on someone’s door or appeals to the public for assistance in solving crime, the willingness of people to help is directly correlated to their opinion of the agency. When an agent working to stop a terrorist plot attempts to recruit an informant, the agent’s success in gathering critical intelligence depends on the informant’s belief that the agent is credible and trustworthy. And, as the former director, James Comey, would frequently say in underscoring the importance of high standards, whether a jury believes an agent’s testimony depends on whether it has faith in the bureau’s honesty and independence. To be effective, the F.B.I. must be believed and must maintain the support of the public it serves.”

“Do F.B.I. agents make mistakes? You bet. They are human beings. Because they are not infallible, the bureau is subject to a robust system of checks and balances, including its internal affairs division, the Department of Justice inspector general, congressional committees and the courts. These watchdogs ensure that personal opinions regarding politics, causes and candidates do not affect investigations. The system also provides an outlet for any investigator who suspects malfeasance on the part of the agency’s leadership to make those concerns known.”

“What, then, are we to make of the recent allegations of political bias at the F.B.I., particularly those involving two employees whose cringe-worthy text messages continue to threaten the agency’s reputation? While it would be disingenuous to claim that those two are not at least guilty of exercising incredibly poor judgment, it would be equally disingenuous for anyone who really knows the modern-day bureau to insinuate that the organization is plotting from within.”

“Furthermore, a congressional memo released on Friday accuses the F.B.I. and the Justice Department of abusing their surveillance powers to spy on a former Trump campaign adviser. But every statement of fact included in an affidavit for foreign intelligence collection must withstand the scrutiny of at least 10 people in the Department of Justice hierarchy before it is reviewed by an independent court.”

“There is, however, a difference between oversight by those in charge of holding the F.B.I. accountable and criticism by politicians seeking partisan gain. Political operatives are weaponizing their disagreement with a particular investigation in a bid to undermine the credibility of the entire institution. “The system is rigged” is their slogan, and they are now politicizing the Foreign Intelligence Surveillance Act process (FISA) used to collect critical intelligence about our adversaries.”

“The assumption among confused and dismayed F.B.I. employees is that the attacks are meant to soften the blow should the investigation by Mr. Mueller, the special counsel, lead to additional charges. However, these kinds of attacks by powerful people go beyond mere criticism — they could destroy the institution. Although those critics’ revisionist supporters claim their ire is reserved for institutional leadership and not the rank and file, it is the F.B.I. agent on the street who will be most severely affected as public support for federal law enforcement is sacrificed for partisan gain.”

“These political attacks on the bureau must stop. If those critics of the agency persuade the public that the F.B.I. cannot be trusted, they will also have succeeded in making our nation less safe.”