aside Max Boot Offers his Theory Behind The Rep. Nunes Anti-FBI Memo

I have a favorite conservative columnist Max Boot who I follow and who has his own theory about what’s really behind the republican US Representative from California Devin Nunes’ anti-FBI memo which makes a lot of sense. He is a historian, a prolific best-selling author, and foreign-policy analyst who is reputed to be one of the “world’s leading authorities on armed conflict” by the International Institute for Strategic Studies.

On February 3, 2018, Max Boot of the Washington Post penned the following report, “The Nunes memo wasn’t meant to win over everyone — just 34 senators”

“That was White House spokeswoman Sarah Huckabee Sanders tweeting on Nov. 3, 2016. Back then, it was Democrats who were complaining about the FBI, and with ample justification: The bureau had released a letter 11 days before the election announcing that it was reopening its investigation of Hillary Clinton based on emails found on former New York congressman Anthony Wiener’s laptop. Nate Silver later concluded, “Hillary Clinton would probably be president if FBI Director James Comey had not sent a letter to Congress on Oct. 28.” Comey’s supposed anti-Clinton bias was even (disingenuously) cited by President Trump as his rationale to fire the FBI director.”

“This claim is about as convincing as Trump’s boast that his State of the Union address was the most-watched in history. Republicans (and Russian trolls) had been pinning their hopes on Rep. Devin Nunes (R-Calif.), the chairman of the House Intelligence Committee, to deliver the goods. But his four-page memo was such a nothing-burger that he left everyone wondering: Where’s the beef?”

REP. DEVIN NUNES”Nunes impugned the motives of former British spy Christopher Steele without actually contradicting anything he reported, and he confirmed that the Steele dossier was not the reason the FBI started investigating the Trump campaign, as Trump partisans had been claiming.”

The Nunes memo is only the latest failed attempt  to find evidence of anti-Trump Bias at the FBI.  A few weeks ago, Trump’s supporters latched unto a few “critical text messages about the president written by agent Peter Strzok. Trump even said the texts were evidence of “treason.” It turns out, according to the Wall Street Journal, “Texts critical of Mr. Trump represent a fraction of the roughly 7,000 messages, which stretch across 384 pages and show no evidence of a conspiracy against Mr. Trump.” Far from being an anti-Trump conspirator, Strzok wrote the initial draft of the October 2016 Comey letter that helped sink the Clinton campaign.”

“None of this remotely supports the hyperbolic demands of Trump supporters who want the leaders of the Justice Department and FBI to be “taken out in cuffs.” If anyone is breaking the law here, it’s Trump with his attempted obstruction of justice.”

“But, specious as the attack on the FBI might be, there is good cause to fear that it is resonating with the only audience that matters to Trump. If special counsel Robert S. Mueller III delivers a scathing report on the president and if Democrats win the House in November, it’s almost certain the House will vote to impeach. But it takes 67 votes in the Senate to remove a president.” “The case against the FBI that’s being assembled by Trump and his minions is not designed to convince dispassionate observers. It’s only supposed to give the thinnest of cover to true believers — and at least 34 senators — to do what they are predisposed to do anyway, i.e., protect the president at all costs.”

“The Nunes memo is a modern-day version of the jury nullification that O.J. Simpson’s legal team sought to inspire. (I’m grateful to Eric Felten of the Weekly Standard for the analogy.) Johnnie Cochran and company spun an elaborate conspiracy theory about how the Los Angeles Police Department supposedly framed their client. They were helped by minor procedural errors in the handling of evidence and by previous racist remarks from one of the detectives, just as Trump is helped by minor FBI missteps such as the Strzok texts and the alleged failure to alert a judge about Steele’s Democratic Party funding.” (This has not been confirmed.) 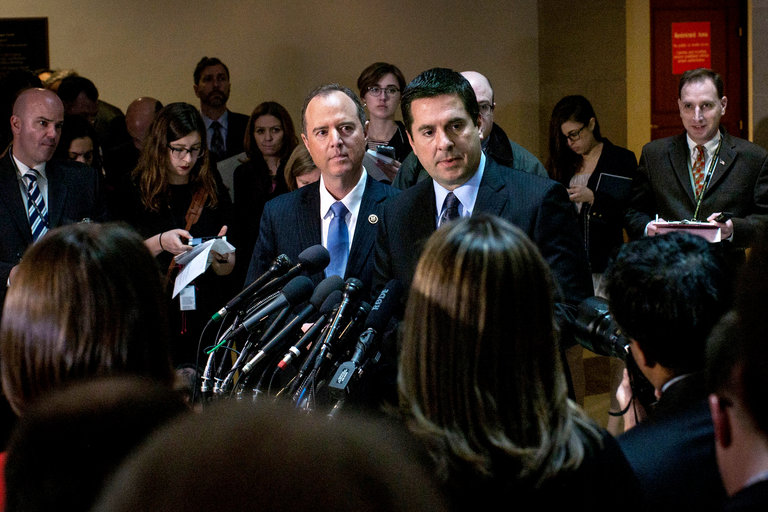 “It was never clear why the LAPD would be eager to frame a local celebrity for murder, just as it’s not clear why the FBI — full of white, middle-age, conservative agents — would want to frame a Republican president. And, of course, the supposed police conspiracy could not possibly account for the mountain of evidence against Simpson, just as the supposed FBI conspiracy cannot possibly account for the undeniable reality that the Russians really did intervene in the election to help elect Trump and that there are numerous documented   links between the campaign and the Kremlin.”

“But in Simpson’s case, it didn’t matter: The overwhelmingly African American jury bought the argument because jurors knew the experience of police brutality and sympathized with the defendant. Likewise, today it doesn’t matter to the president’s acolytes that the case for an anti-Trump conspiracy is so flimsy. They are simply looking for an excuse to exonerate him. Sadly, Sarah Huckabee Sanders may have been wrong: Attacking the FBI could turn out to be a winning (if reprehensible) strategy for Trump.