I am cutting to the chase. On February 7, 2018, the White House staff secretary and a top aid Rob Porter to the republican President Donald Trump resigned as news about his past abuse of his two former wives became public. While Mr. Porter resigned even though he claimed innocence, there were White House personnel like the Chief of Staff General John Kelly asking him to stay. What these president’s men and women don’t get is that, is that he is quitting because he is guilty as sin.

This is another case that has me putting any mishandling of this situation at the feet of General Kelly, as Mr. Porter was his guy. General Kelly has been showing himself to be totally lacking in sound judgment in trying to keep this young man on board despite serious negative information on him.  I hate to think about General Kelly being a man in the “Trump” mold but that’s just what he is.

CNN published a report but the Daily Mail published the more detailed lengthy story and is a worthwhile read. 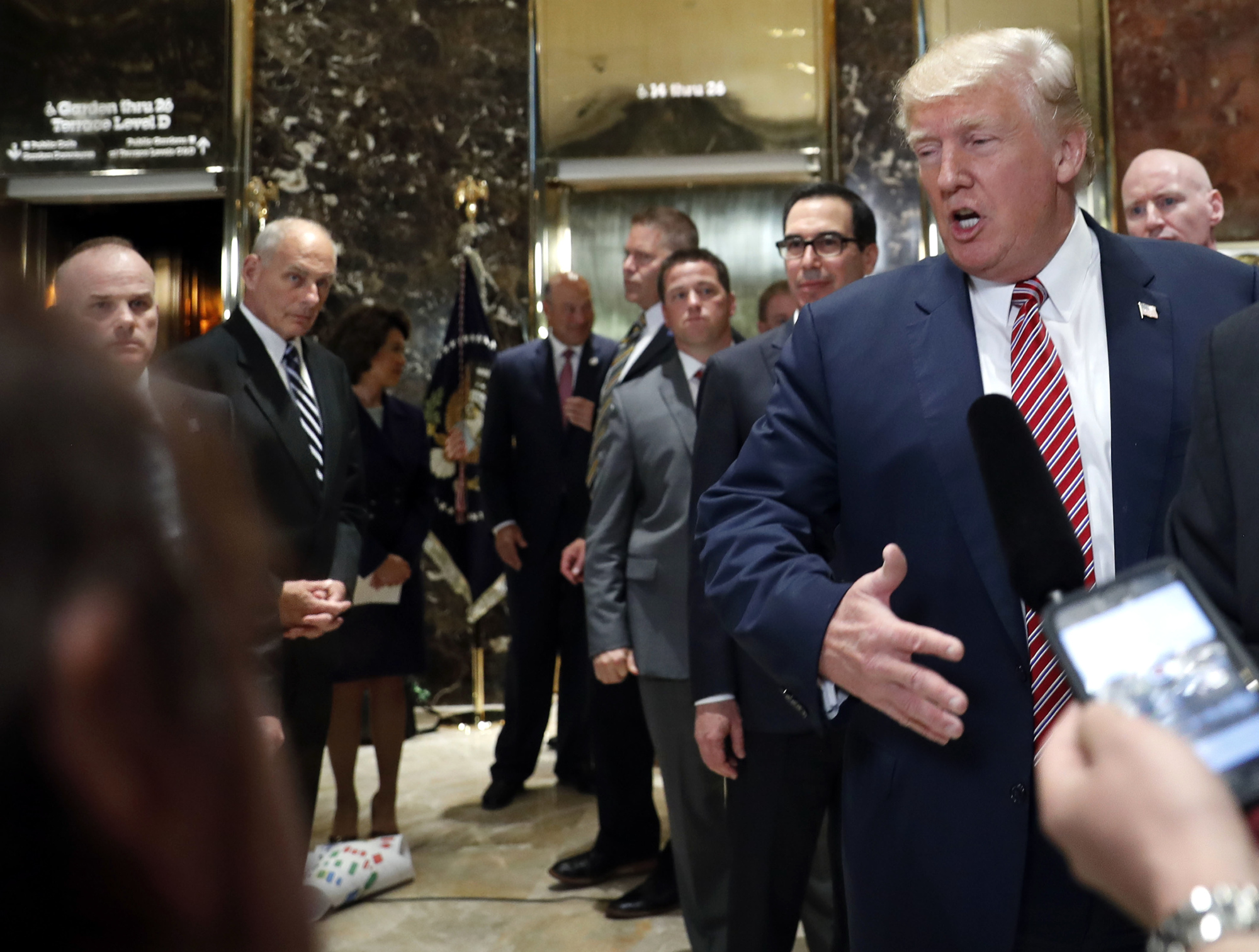 On February 7, 2018, David A. Graham of the Atlantic penned the following report,  “The Rise and Fall of John Kelly’s Reputation” (“The White House chief of staff is facing new scrutiny for his defense of a staffer who has resigned following accusations of physical abuse from two ex-wives.”)

“There’s only ever really one story arc in Washington. A new face arrives in town, impresses people, and reaches dizzying new heights. Before too long, however, the capital becomes disillusioned and turns on him (or occasionally her).””That’s the story of Rob Porter, the White House staff secretary, who announced his departure on Wednesday after published allegations of abuse from his 2 ex-wives. And more broadly, it’s also the story of John Kelly, the White House chief of staff who was Porter’s boss and defender.”
“Unlike many members of the White House cast, Porter is not a household name, but he had rocketed to an important role directly by President Trump’s side. He controlled the flow of information to Trump and spent a great deal of time with him. “Porter had good relationships across the ideological spectrum of the White House—from Stephen Miller to Gary Cohn, was one of Kelly’s most trusted aides, and was in charge of the weekly trade policy meetings,” Jonathan Swan reports.”

“According to 2 ex-wives, Porter was also abusive. The women gave interviews to the Daily Mail describing both physical abuse, including punching and choking, and verbal abuse. On Tuesday, the White House staunchly defended Porter. Kelly called Porter “a man of true integrity and I can’t say enough good things about him. He is a friend, a confidante, and a trusted professional. I am proud to serve alongside him.””On Wednesday, after The Intercept published photos provided by Colbie Holderness, Porter’s first wife, that showed a black eye, Porter announced he was resigning from the White House, though he declared his innocence. “These outrageous allegations are simply false,” he said in a statement.” 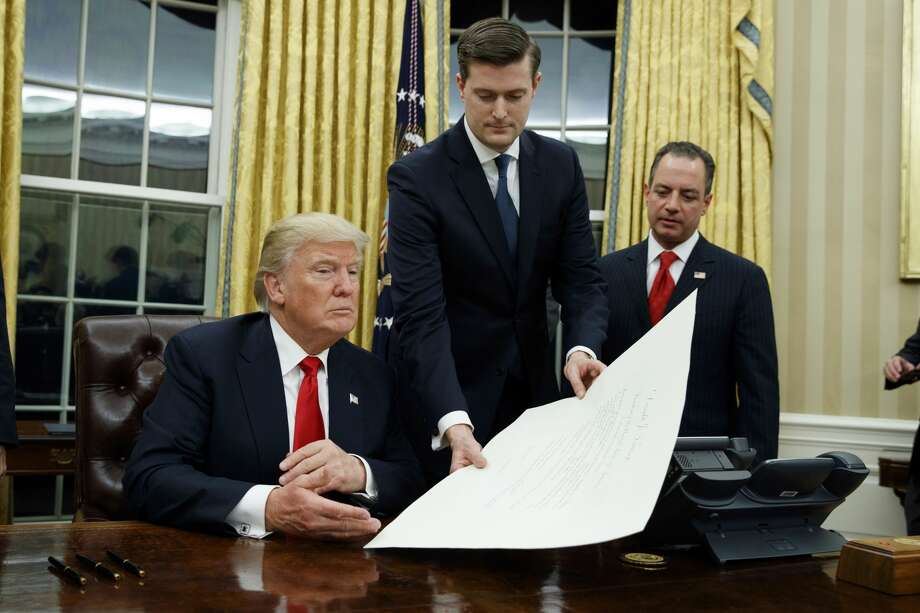 “The case once again brings unwanted attention to the president’s own record with women, just as many of the stories in the #MeToo movement have—most recently, the resignation of RNC finance chairman Steve Wynn, a Vegas mogul whom Trump handpicked for the job. Ivana Trump, the president’s first wife, once accused him of marital rape, though she later backpedaled on that claim.””But Porter’s story also brings fresh scrutiny to Kelly, who was promoted from secretary of Homeland Security to White House chief of staff last summer. In addition to Kelly’s surprisingly unequivocal statement on Tuesday, Axios reports that Kelly was among White House officials urging Porter, in an unfortunate turn of phrase, “to stay and fight” rather than resign.”

“If Kelly did not know about the allegations in Porter’s past, then his unflinching defense is a matter of bad judgment, but there are reasons to believe that Kelly should have known. Both of Porter’s ex-wives told The Intercept that they had informed FBI agents vetting Porter about the past abuse. A senior administration official also told Politico that Kelly was aware of a 2010 protective order against Porter.””In fact, Porter had reportedly not received permanent security clearance because of the order, which is notable because his job was to handle all documents that went to Trump, which included a great deal of classified material. Staffers can receive temporary clearance to view classified material while waiting for final clearance. (White House Press Secretary Sarah Sanders refused to comment on the status of Porter’s clearance during Wednesday’s briefing.) Despite these issues, Kelly hired Porter on, kept him, and defended him to the hilt. Kelly is the same man who, during an emotional briefing in October, fumed that when he was young, “Women were sacred and looked upon with great honor. That’s obviously not the case anymore as we’ve seen from recent cases.”

“This is not the only turn in the spotlight this week for Kelly, a generally press-shy individual. The chief of staff, rejecting calls for the White House to extend the Deferred Action for Childhood Arrivals program, said that “Dreamers” should have registered during the Obama administration, and those who did not were “too lazy to get off their asses.” Democrats lashed out at Kelly about the comments behind closed doors, but rather than try to set the incident aside, Kelly repeated what he’d said to reporters. As even rigorously nonpartisan reporters noted, Kelly was invoking shopworn stereotypes about immigrants and people of color.””Only a few weeks ago, Kelly reportedly torpedoed a deal between Trump and Senate Democratic Leader Chuck Schumer to extend DACA. After a productive meeting between Schumer and the president, Kelly called Schumer and informed him that the deal was insufficiently tough on immigration, eventually leading to a brief government shutdown.”
“It seems as if scales are falling from some eyes in Washington, allowing them to see Kelly more clearly—just the same arc of meteoric rise followed by disillusionment that Porter followed. When Kelly was moved to the White House in July, at the time of the political murder-suicide of Reince Priebus and Anthony Scaramucci, he was hailed as the “adult in the room.” With his military background and baseline competence, this was true—but, as it turned out, this was more of a commentary on what came before. Adoring press coverage portrayed Kelly as a patriot who was taking on an impossible job with an impossible president out of love of country and out of desire to protect the nation from its own president.””It quickly became clear, however, as I wrote in October, that Kelly is a true Trumpist. Early on, he was caught on film appearing to grimace as Trump offered aid and comfort to white supremacists; it didn’t take too long for it to become clear that this was just Kelly’s default facial expression.
“In October, Trump was slow to speak about the deaths of U.S. soldiers in Niger, only delivered condolences in a delayed fashion, and then inexplicably got into a feud with the widow of one soldier. The president than crassly invoked Kelly’s son’s death in action, and much of the press—still convinced Kelly was a moderate voice of reason in the White House—waited anxiously for the chief of staff to set the president right.”

“Instead, Kelly came out and staunchly defended Trump. In the process, he escalated a feud with Representative Frederica Wilson of Florida, a black woman, telling an anecdote that portrayed her in a negative light and calling her an “empty barrel.” (This was the same occasion on which he lamented that women were no longer sacred.) Video proved that Kelly’s attack was false, but the White House refused to acknowledge as much. Sanders scolded reporters, “If you want to get into debate with a four-star Marine general, I think that is highly inappropriate,” a chilling suggestion that military officers (even retired ones like Kelly) are above criticism, and one that foreshadowed Trump’s more recent accusation of “treason” against congressional Democrats who didn’t applaud his State of the Union address. Kelly also defended Robert E. Lee, who led a treasonous armed revolt against the United States, as an “honorable man.””Leon Panetta, the Washington wiseman and White House chief of staff under Bill Clinton, had advised Kelly early on, but in late October, he said, “John is a great Marine … but he is not a politician, and one thing he lacks is the ability to look at the big political picture and understand what you should and shouldn’t say as chief of staff.”

“There had been plenty of warning signs that Kelly was no moderate, even if they went largely unheeded in the mainstream press. These included his devotion to the drug war, his hard-charging if brief tenure as secretary of Homeland Security, and his prior defense of the prison at Guantanamo Bay. (Some Obama administration officials accused Kelly, at the time commander of the U.S. Southern Command, of sabotaging the prison’s closure.)”

“Kelly has brought new discipline to the West Wing, but he has not moderated Trump’s behavior. While that is in part, as Kelly takes pains to point out, because his job is to manage for the president, not to manage the president, it is also because Kelly seems to be on the same page as Trump on most issues. One crucial element of Kelly’s successful management is that insofar as Trump has any ideology, Kelly shares it. More than any other West Wing aide, past or present, Kelly is a true Trumpist. Reince Priebus was a classic establishment Republican; Stephen Miller is a hard-line conservative ideologue; Trump has no such consistent views. Steve Bannon tried to impose his own confused nationalist-populist melange on Trump and found himself kicked to the curb.”
“Kelly shares the same worldview as Trump. Both men have a reflexive social, rather than political, conservatism, grounded in nostalgia for a former era. (They are close in age, and both from northeastern cities.) As a result, they are more pragmatic on some issues than conservative ideologues, while bringing less political finesse to matters of race. They are reflexively disdainful of immigrants and tend to pick fights with women, especially women of color. “”By last fall, it should have been clear that Kelly was a better disciplinarian than Priebus but had no intention of trying to slow Trump’s project. In the wake of his defense of Porter, his “lazy” comments, and his intervention in the immigration debate, many observers who had stubbornly clung to hopes that Kelly would deliver the nation from chaos are finally abandoning those hopes. It’s Washingtonian physics: What goes up must come down.”