On March 13, 2018, there is another special election being held for a Pennsylvania US congressional seat for the 18th district where republicans have filled it for over 3 decades and which President Trump won by 19 points. This time the polls are already close between the democratic candidate and the republicans’ choice with the democrat Conor Lamb having been outspent by his opponent by 17 to 1.

The democrat Conor Lamb has been asking for some extra donations in this home stretch on Twitter @conorlambpa. If the democrats win this long shot election, it will be the 38th win by their party between 2017-2018.

“Pollsters and political pundits have long been perplexed by the state of Pennsylvania.  It’s neither a Blue State nor a Red state, nor does it qualify as a classic swing state, usually defined as one with a solid block of moderates not married to party ideological purity that can ‘swing’ an election either way.”

“Former Clinton operative James Carville famously described the keystone state as Liberal bastions Philadelphia and Pittsburgh on either end with Alabama in between, but, crucially, “without the Blacks.”

“It has the second-highest concentration of NRA members, behind only Texas,” Carville famously opined. “They didn’t film The Deer Hunter there for nothing.”

“One of the state’s most Alabama of districts is the Pennsylvania 18th, which The Cook Political Report rates as R+11 – in other words, among the reddest of districts.  And it’s been that way for nearly 30 years, since Rick Santorum won the seat in 1990.  Since then, the 18th has been a near lock for the GOP, to the point where Democrats didn’t bother entering a candidate for multiple election cycles.  Trump won the Pittsburgh exurb area by a whopping 19 points in 2016.” 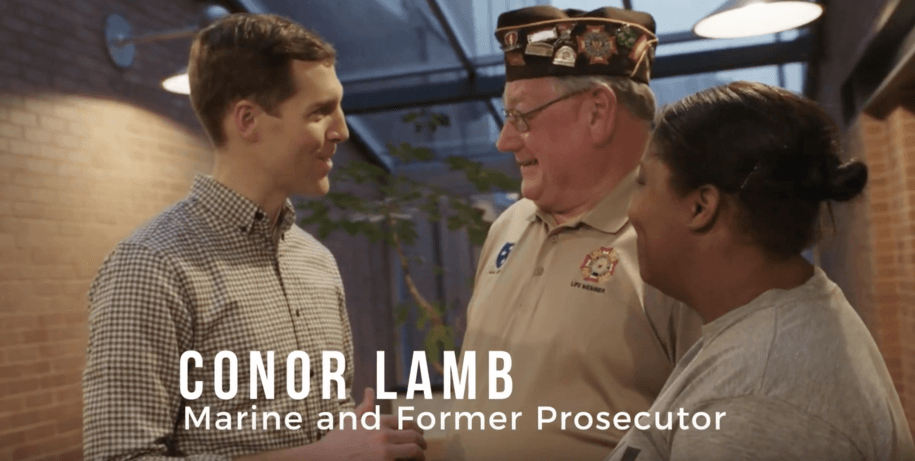 “Tim Murphy, the Republican who’s held the seat since 2003 and won reelection easily in 2016, resigned in scandal in October when reports revealed that he not only had an extramarital affair, but then forced his mistress to get an abortion when she became pregnant with his child – a massive no-no for an avowed Christian and a supposed pro-life conservative.”

“Add to that the disarray the state finds itself in after the courts redrew the congressional district map this week, and no one is quite sure what to expect come March 13th when voters go to the polls to replace the disgraced Murphy.”

“Enter Democrat Conor Lamb, who Vox Magazine describes as, “a 33-year-old Marine and former assistant US attorney who prosecuted drug dealers in the midst of Pennsylvania’s deadly opioid crisis.”

“Republicans are running Pennsylvania State congressman Rick Saccone in a desperate attempt to keep the seat red in next month’s special election, and they’re so worried about his prospects that they’ve outspent Lamb by 17-1 thus far.  But it hasn’t worked. The Democrat is surging, having just pulled within the margin of error in the latest polls with just days left in the abbreviated campaign.”

“If Lamb pulls off the upset, it would mark just the latest in a string of high profile Democratic victories in recent special elections, and could spell doom for the GOP in 2018 – and for Trump in 2020.”