aside EPA Administrator Scott Pruitt Is Heading For The Exit Door, Maybe

Until recently, my family of bloggers could only fantasize about the demise of the head of the Environmental Protection Agency (EPA) Scott Pruitt who has been successfully rolling back any and all government regulations designed to improve manufacturing products standards like cars to lower carbon emissions harmful to the air and to limit the chemical and other harmful agents from seeping into our water supplies, the air we breathe. It has been the courts which have been the only checks on Mr. Pruitt’s push towards deregulation without a thought as to the value and the negative consequences of any of the regulations that are being axed.

But fortunately, Mr. Pruitt is so ethically challenged that even the republican President Donald Trump who is very satisfied with his job performance, should have no choice but to show him the exit door. Mr. Pruitt has gone out of his way to act so outrageously that he is the one who put the target on his own back. But in this White House, the president would have fired him long ago.

It has been horrifying to learn that the president had seriously been considering Mr. Pruitt to replace his Attorney General Jeff Sessions, whenever the president decided to fire him.

See: Scott Pruitt is a cartoon villain – The Week 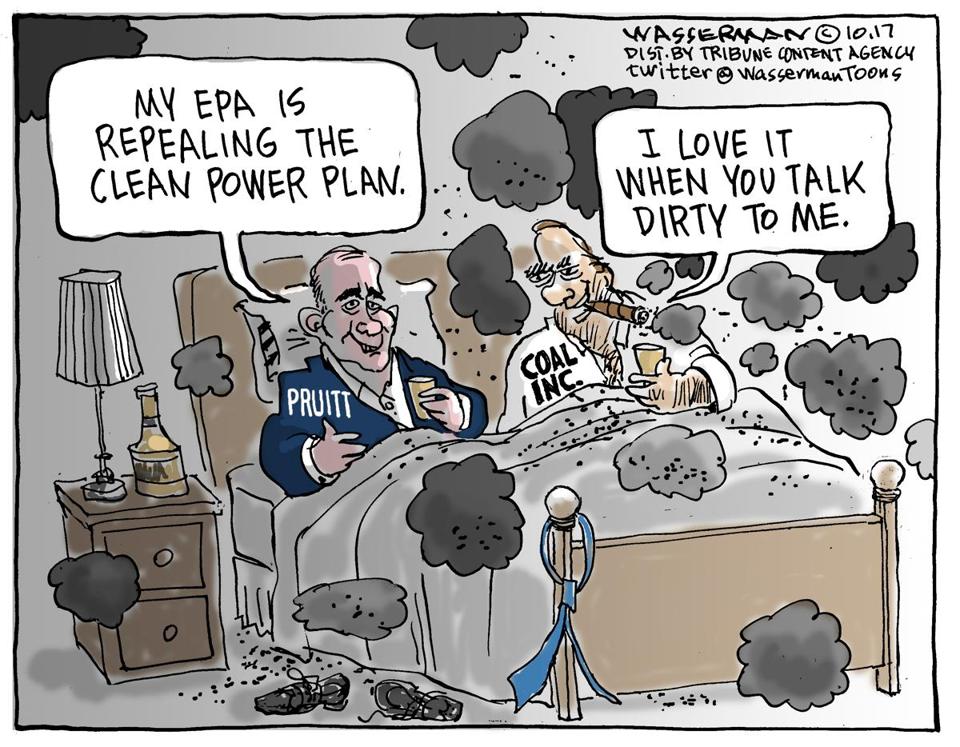 “At least five officials at the Environmental Protection Agency, four of them high-ranking, were reassigned or demoted, or requested new jobs in the past year after they raised concerns about the spending and management of the agency’s administrator, Scott Pruitt.”

“The concerns included unusually large spending on office furniture and first-class travel, as well as certain demands by Mr. Pruitt for security coverage, such as requests for a bulletproof vehicle and an expanded 20-person protective detail, according to people who worked for or with the E.P.A. and have direct knowledge of the situation.”

“Mr. Pruitt bristled when the officials — four career E.P.A. employees and one Trump administration political appointee — confronted him, said the people, who were not authorized to speak publicly.”

“The political appointee, Kevin Chmielewski, was placed on administrative leave without pay, according to two of the people with knowledge of the situation. Mr. Chmielewski was among the first employees of Donald J. Trump’s presidential campaign, serving as a senior advance official. The two people, who are administration officials, said that Mr. Chmielewski flagged some of his concerns about Mr. Pruitt directly to the White House’s presidential personnel office.”

“Two of the career officials, Reginald E. Allen and Eric Weese, were moved to jobs where they had less say in spending decisions and less interaction with Mr. Pruitt, the people said. A third career official, John E. Reeder, joined American University as a temporary “executive in residence” after being told by the E.P.A. to find a new job. And John C. Martin, who served on the security detail, was also removed from the team and had his gun and badge taken away after raising concerns about how Mr. Pruitt’s security was being handled.”

“A sixth official, Mr. Pruitt’s chief of staff, Ryan Jackson, also raised questions about Mr. Pruitt’s spending, according to three E.P.A. officials. He remains in his job but is considering resigning, agency officials said. Mr. Jackson came to the agency from the office of Senator James M. Inhofe, Republican of Oklahoma, who like Mr. Pruitt had been a major critic of regulatory moves made under President Barack Obama, and is a prominent climate change skeptic.”

“Approval was required by the staff officials for certain of Mr. Pruitt’s expenditures, and Mr. Allen, Mr. Chmielewski, Mr. Jackson and Mr. Reeder at various points each voiced concerns to Mr. Pruitt directly about his spending, according to the two administration officials.”

“Neither Mr. Jackson nor any of the five officials who left or were removed after questioning Mr. Pruitt would comment when contacted by The New York Times. Before their reassignments or removals, Mr. Weese was the head of Mr. Pruitt’s protective detail, and Mr. Reeder, Mr. Allen and Mr. Chmielewski each served as deputy chief of staff.”

“In speaking to reporters on the plane, he described Mr. Pruitt as “very courageous,” while suggesting he was reviewing the complaints about him. “I’ll make that determination,” Mr. Trump said. “But he’s a good man, he’s done a terrific job. But I’ll take a look at it.” “The E.P.A. challenged the assertion that the reassignments were related to objections to spending and other management issues. “We dispute the veracity of the accusations,” said Jahan Wilcox, a spokesman for the agency.”

“The staff tumult comes to light as Mr. Pruitt’s stewardship of the agency is under mounting scrutiny. He is the subject of an investigation by the E.P.A.’s inspector general, who is examining some of the spending and security issues. The White House confirmed on Wednesday that it was conducting its own examination.” 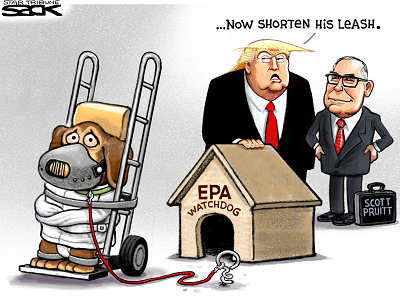 “Several current and former E.P.A. employees said morale at the agency had suffered as they watched the friction play out between Mr. Pruitt and the officials. Christopher Zarba, a career E.P.A. employee who retired in February after leading the agency’s scientific advisory boards, said it was well known in the office that Mr. Allen had been sidelined for challenging Mr. Pruitt.”

“Brilliant, a natural leader, an off-the-charts-talented guy,” Mr. Zarba said of Mr. Allen. “He had to push back on Pruitt on some of the trip and office modification expenses to keep everything legal, and we speculated he might have been removed for that reason.”

“A senior political appointee, who came to the agency with the Trump administration and works on policy issues, offered a defense of Mr. Chmielewski: “Kevin is one of the most upstanding public servants and nicest all-around people. Just because he stood up to what was clearly a bad idea, they are trying to sabotage the poor guy’s reputation.”

“Mr. Pruitt declined to be interviewed for this article, but he has spoken with conservative media organizations. In those interviews, he has cried foul about a flurry of media reports about his regular first-class travel, his use of an obscure administrative provision to increase the salaries of two favored aides (over White House objections) and his below-market rental agreement for accommodations in Washington with the wife of an energy lobbyist whose clients won favorable treatment from the E.P.A.”

“The disclosures, he has suggested, were the handiwork of critics who were resorting to personal attacks to derail the deregulatory agenda being pursued by his agency and the Trump administration. Since taking the administrator’s job in February 2017, Mr. Pruitt has advanced one of the administration’s most aggressive regulatory rollbacks, including regulations intended to tighten rules related to coal-burning power plants, oil and gas drilling, auto and truck air emissions, and pesticides.”

“For instance, in a conversation with one of Mr. Pruitt’s closest aides, Mr. Chmielewski sharply objected to a proposal to buy a $100,000-a-month charter aircraft membership that would have allowed Mr. Pruitt to take unlimited private jet trips for official business, according to two administration officials. The membership was not purchased.”

“Mr. Chmielewski also objected to a proposal to spend about $70,000 to replace two desks in Mr. Pruitt’s office suite, including his personal desk and one at a security station outside his office. Asked about the proposed desk purchases, Mr. Wilcox, the E.P.A. spokesman, said that “the administrator never considered the proposal.” Pasquale Perrotta, who became head of Mr. Pruitt’s security detail after Mr. Weese was removed, insisted that the security desk be upgraded to a bulletproof model, according to current and former E.P.A. employees with direct knowledge of the discussions.”

“Still, Mr. Pruitt and his team obtained many of the perks he wanted. Staff members questioned, but nonetheless approved, frequent trips that routed Mr. Pruitt through hub airports that allowed him to spend weekends at his home in Oklahoma. The administrator also had charter flights approved after they were already taken.”

“This memorandum responds to your request for written approval for the Administrator and three EPA employees to use a charter service to fly from Denver to Durango, CO on August 4, 2017,” read a memo written in late August, after the trip was completed. The approval covered a charter flight to tour the Gold King Mine near Silverton, Colo., after Mr. Pruitt’s commercial flight to Denver was delayed. This 40-minute flight cost $5,719, the records show.” 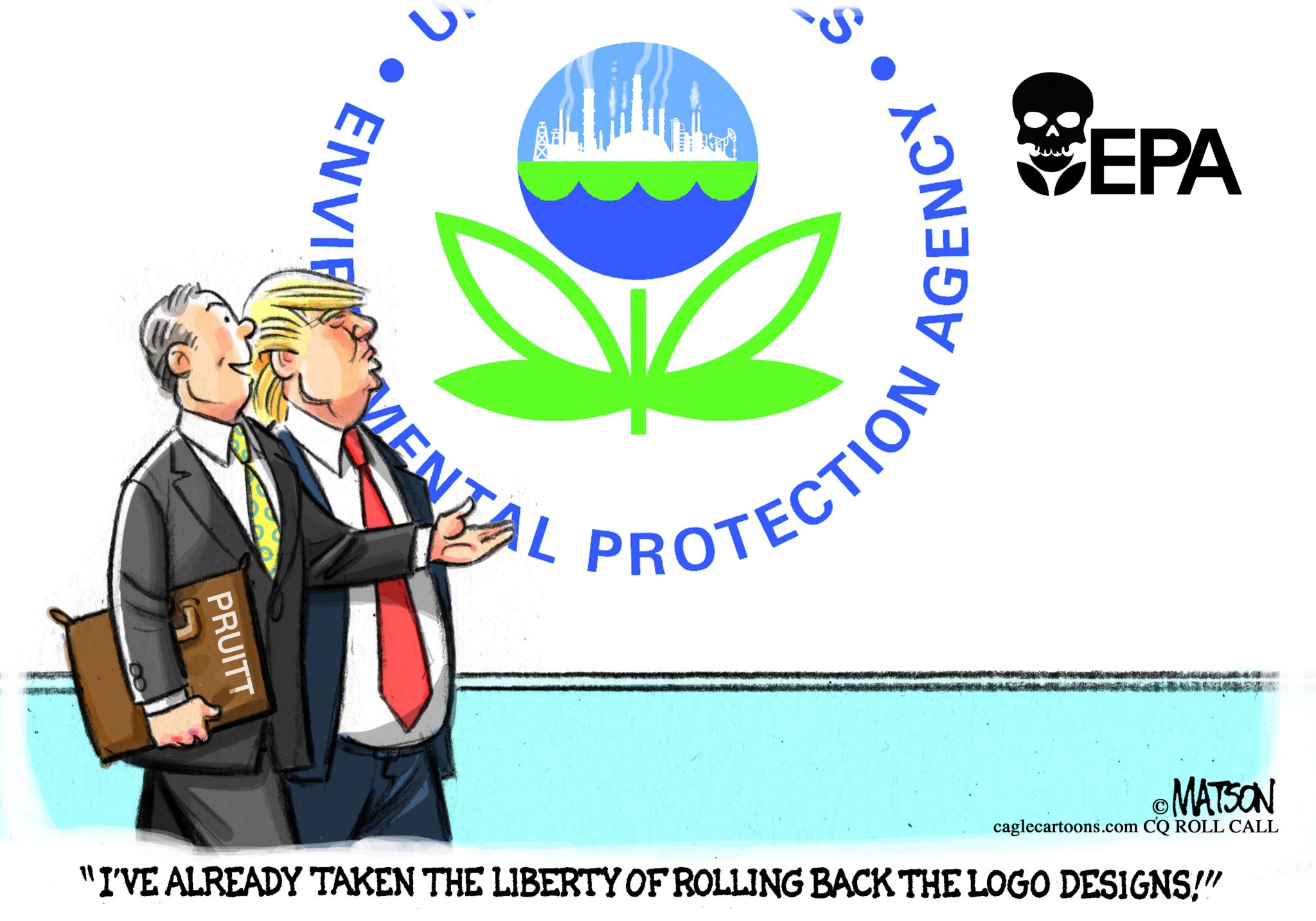 “Other memos released through the open-records law show that Mr. Allen handled requests for renovations to Mr. Pruitt’s office. “I spoke to Gayle and we can proceed as it is not part of the $5,000,” read an email to Mr. Allen in April 2017, as staff members were being pressed to find a way to spend more on office renovations than was allowed under federal guidelines. In this case, the expenditure involved a biometric lock and was not counted against Mr. Pruitt’s furniture budget. “Approved,” Mr. Allen wrote back.”

“Mr. Weese, the security official, questioned Mr. Pruitt’s desire to use flashing lights and sirens in his motorcade — a perk more commonly associated with the presidency — according to three of the people who worked with or for the E.P.A.”

“Mr. Pruitt, who often ran late, wanted to use the lights and sirens to expedite local trips in Washington to the airport or to dinner, including at least one trip to Le Diplomate, a trendy French restaurant that he frequented. Such use was not consistent with agency policy, but Mr. Weese was unsuccessful in stopping it.”

“The agency said Mr. Pruitt played no role in deciding when the sirens and lights would be used. “The security detail for the past 15 years has used them in very limited fashion,” Mr. Wilcox said.”

“Mr. Weese was also reluctant to sign off on requests for Mr. Pruitt to travel in first class based on security concerns. Mr. Allen, Mr. Chmielewski and Mr. Reeder, too, questioned the use of taxpayer money to pay for first-class airfare. Only after Mr. Weese was replaced by Mr. Perrotta did Mr. Pruitt regularly fly first class, agency staff members said.”

“There were also questions raised about a request that Mr. Pruitt be issued a bulletproof sport utility vehicle with so-called run flat tires, which keep a vehicle moving even when sustaining gunfire. And they challenged Mr. Pruitt’s expanded security detail of approximately 20 members, three times the size of his predecessor’s. Unlike his most recent counterpart under Mr. Obama, Gina McCarthy, Mr. Pruitt has security officials follow him wherever he travels, and also stay on duty overnight.” 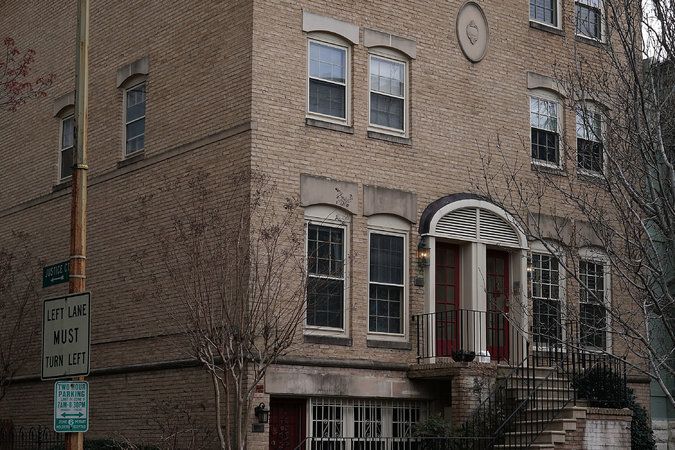 “Mr. Perrotta also remains an executive at a private security firm, Sequoia Security Group, which separately received a contract from the E.P.A. to conduct a security sweep of Mr. Pruitt’s office, a deal that is now the subject of an investigation by the agency’s inspector general.”