aside What Could Possibly Go Wrong With All The Positive Hype Over US Meeting With N Korea?

The republican President Donald  J. Trump appears to be counting on his “Nobel Peace prize” for whatever role he plays in future talks between him and North Korea’s leader Kim Jong-Un sometime in the near future. To assist with his plans he has two shiny new professionals, the National Security Adviser John Bolton and the Secretary of State Mike Pompeo.

Mr. John Bolton does have a history of being a hard-line hawk against North Korea who has previously negotiated with its officials under the administration of President’Bush. He has also advocated for a US pre-emptive strike against North Korea in the past. He may have already attempted to sabotage the president’s future plans for the talk’s long shot chances for any success.

On May 4, 2018, Abigail Tracy of Vanity Fair penned the following report, “A DOG WHISTLE TO THE NORTH KOREANS”: WILL TRUMP’S IGNORANCE (AND BOLTON’S IMPETUOUSNESS) DOOM THE NORTH KOREA SUMMIT?’ (“Diplomats fear the president’s blind spots portend a breakdown in talks with Pyongyang.”)

“The biggest crowd, the tallest building, the best possible North Korean peace deal: it’s absolutely unsurprising that the salesman in chief is selling very hard. During a White House event on Monday, Donald Trump boldly claimed, “The United States has never been closer to potentially having something happen with respect to the Korean peninsula, that can get rid of the nuclear weapons, can create so many good things, so many positive things, and peace and safety for the world.”

“But as he lobbies for a Nobel Prize, large parts of the foreign-policy establishment, along with many Korea experts, argue that he may be giving away the store, and wonder about the tactical wisdom of Trump’s negotiating, where he’s massively raised expectations for what a deal could achieve. “If you’re familiar with the history of these negotiations, [Kim Jong Un] has not even reaffirmed the more definitive statements about denuclearization that were used by the North Koreans in the past,” Victor Cha, who was seen as a contender to be U.S. ambassador to South Korea earlier this year, told me, noting that the Kim regime made similar promises before.”

“My worry is that Kim thinks that he is getting to keep his nuclear weapons and being recognized as a nuclear power, as long as he follows certain rules,” sighed Jeffrey Lewis, the director of the East Asia Nonproliferation Program at the Middlebury Institute of International Studies at Monterey. “The president keeps acting like he is going to show up, and he is going to physically turn over all his weapons. That is a big mismatch in expectations.”

“Which isn’t to say that a meeting with Kim isn’t a once-in-a-lifetime opportunity. “While it does all seem too good to be true, I think it is a bona fide opening,” a former State Department official told me. “My guess is that the U.S.-D.P.R.K. summit won’t achieve a mega-breakthrough. In truth, it can’t. That would be the process of months of negotiations. But it probably will kick-start the opportunity.”

“It’s not surprising that Trump’s “great man” theory of history—Trump being the great man, of course—is viewed as far too simple among the diplomats he so disdains. Amid chants of “Nobel! Nobel! Nobel!” from the audience at a rally last month, Trump declared that he had “everything” to do with Kim’s acquiescence. But sources I spoke with downplayed the significance of Trump, himself. “Nothing in international relations happens for one reason,” said Cha. A foreign diplomatic official credited the United Nations Security Council, sanctions, and multilateralism. “No country, no matter how powerful, can impose peace alone,” they said. Lewis went so far as to label Trump “completely irrelevant,” arguing that Kim is only willing to talk because he has already achieved his family’s decades-long quest for nuclear capability. “North Korea would have finished the nuclear weapon and the I.C.B.M. with or without Trump, and once they did, that they would have turned around and offered [South Korean President Moon Jae-in] an inter-Korean summit, because they get all kind of goodies for that,” he told me.”

“Some say why Kim is coming to the table is unimportant. But Trump’s failure to recognize that Kim could be motivated by the advancements in his nuclear program suggests to others that he still doesn’t understand how the North Korean leader views the bomb—and, as a result, the improbability that he will give it up. After decades of working toward achieving nuclear capability, experts say, the notion of a nuclear-free Korean peninsula is likely wishful thinking. “The fact that they possess—and seem willing and ready to use—those weapons is what got them world attention and, eventually, got them a meeting with the president of the U.S.A.,” the former State Department official told me. “North Korea, in the end—they do want a peace treaty, and they do want normalization, but they want those things as a nuclear-weapon state,” Cha added. “They’re willing to part with some of their capability, but they’re certainly not willing to part with all of it. ” 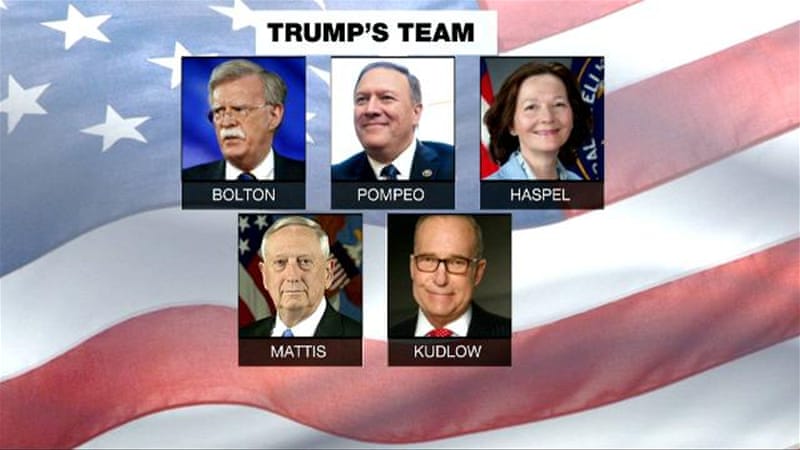 Kim, meanwhile, seems to have done his homework. “At the age of 34, he’s really mature. He didn’t need help from aides or assistants” when he met President Moon at the D.M.Z. last week, observed a South Korean presidential adviser speaking to Robin Wright of The New Yorker. “Moon was quite surprised.” The North Korean leader has also played a savvy hand, winning major diplomatic concessions, even as he has yet to make any substantive concessions of his own. All he has done, Lewis said, is “endorse the kind of vague principle of the elimination of nuclear weapons, in much the same way that President [Barack] Obama did in Prague,” when the former U.S. president outlined a vision for a nuclear-weapon-free world. “It represents kind of a recognition of his nuclear status. He gets to keep the weapons as long as he says, sort of abstractly, that he is in favor of getting rid of them someday—But it serves as a de facto recognition of his nuclear status.” “Besides Trump and Kim and Moon, a fourth crucial player in this negotiation is liable to be Trump’s newly minted national security adviser, John Bolton, who was involved in the failed negotiations with North Korea during the George W. Bush administration. Bolton has a famously hawkish mien, and a very dim and oft-stated view of the North Koreans’ honesty and the prospects for peace. This is why Bolton’s reference to the disarmament of Libya near the turn of the century, while he was making the rounds on the cable-news shows last Sunday, was so avidly interpreted. “We have very much in mind the Libya model from 2003, 2004,” he said on Fox News Sunday. “There are obviously differences. The Libyan program was much smaller, but that was basically the agreement that we made.” Along with Saddam Hussein’s similar decision to give up Iraq’s nuclear program in the 1990s, Muammar Qaddafi’s gruesome death after he agreed to disarm Libya is an object lesson for North Korea in what happens when a leader acquiesces to international pressures.” 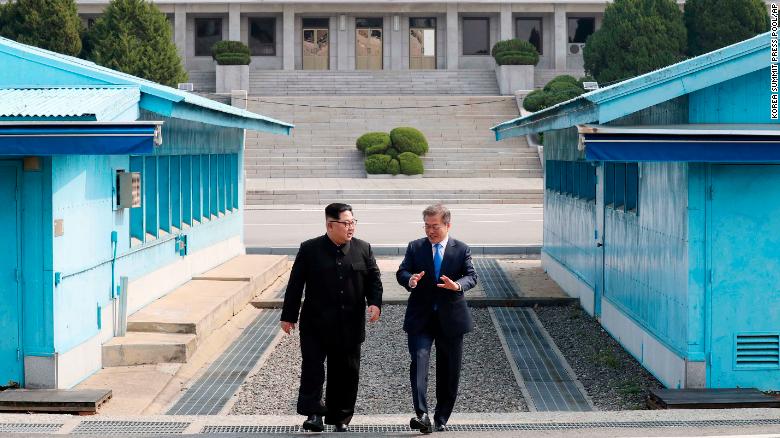 “Much as they see Trump’s current premature victory lap as dangerously naïve, diplomats I have spoken with tend to view Bolton as a dire threat to real peace. “Libya is not the appropriate case study for anyone who actually wants to secure a peaceful diplomatic arrangement on North Korea’s nuclear program,” John Glaser, the director of foreign-policy studies at the Cato Institute, explained. “In 2004, in talks with the United States, Libya gave up a pitifully undeveloped enrichment program . . . in exchange for some meager economic benefits. That turned out to be a fateful decision for Qaddafi when the U.S. and its European allies served as an air force for Libyan rebels, who later sodomized Qaddafi with a knife, beat him in the streets, and shot him dead, marking the final end to him and his regime.”
“Pyongyang, he added, “took special note of the Libyan case, and they have since pointed to it as part of the reason they continued to pursue a viable nuclear-deterrent capability—because it is the only true assurance against U.S.-led invasion, attack, and regime change.
”The Libya reference was construed by some as an attempt by Bolton—who has previously advocated a pre-emptive military strike against Pyongyang—to sabotage the talks with North Korea by raising the president’s expectations.” 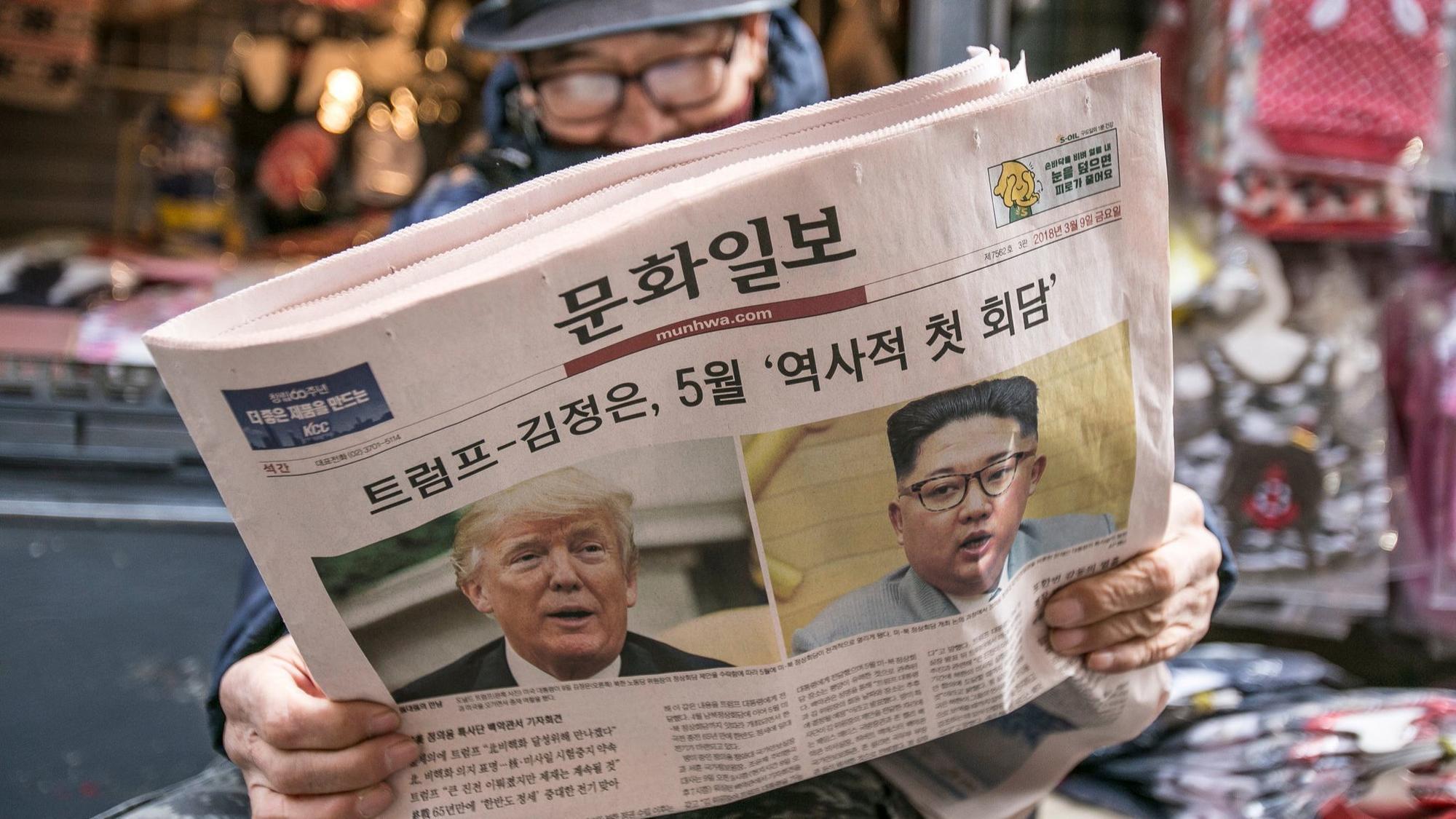 “The Trump comments on Iran and the Bolton comments on Libya aren’t helpful on the face of it. But maybe provide some hint to the D.P.R.K. that we won’t be overly flexible or generous in discussing the nuclear issue with them,” said the former State Department official, who overlapped with Bolton during his time in Foggy Bottom. But whatever its purpose, this person stressed that it was not an off-the-cuff remark. “John Bolton is very strategic, very tough, and unlikely to say things unless he’s thought it through.”
“A current administration official offered a starker assessment of Bolton’s remarks. “I mean, there is only one reason you would ever bring up Libya to the North Koreans, and that is to tell them, ‘Warning: don’t go any further because we are going to screw you,’” they told me. “So yeah, I completely agree that that is a dog whistle to the North Koreans, telling them, ‘don’t trust us.’”

Link to entire report:  “A Dog Whistle to the North Koreans”: Will Trump’s Ignorance …