On the 6th day of June 2018 The adult film star Stormy Daniels (aka Stephanie Clifford) who alleges that she had an adulterous affair with the US president in 2006 has filed suit against her former attorney Keith M. Davidson and the president’s personal attorney/ consigliere/ fixer Michael Cohen. She via her current attorney Michael Avenatti, is claiming that her former lawyer had been conspiring with Michael Cohen against her best interests.

t seems that Keith M. Davidson also represented another of President Trump’s 2006 paramour Karen McDougal, a former playboy model. I am betting that there are others.

“Adult film star Stormy Daniels filed a new lawsuit on Wednesday claiming her former lawyer cooperated with President Trump’s personal attorney, Michael Cohen, while still representing her in a nondisclosure agreement she signed in 2016 to stay silent about an alleged 2006 affair she had with Trump.” “NBC News reported that Daniels, whose real name is Stephanie Clifford, alleged in a lawsuit filed in Los Angeles that Keith Davidson “hatched a plan” with Cohen to get her to falsely deny the affair in a Fox News interview earlier this year after reports surfaced about the agreement and alleged affair.”

“Daniels further claims that Davidson broke attorney-client confidentiality by alerting Cohen of her plans to hire her current attorney Michael Avenatti and share her story.”

“Mr. Davidson abdicated his role as an advocate and fiduciary of his client Ms. Clifford and instead elected to be a puppet for Mr. Cohen and Mr. Trump in order to advance their interests at the expense of Ms. Clifford,” the lawsuit states.”

“The lawsuit cites text messages Davidson and Cohen exchanged in January 2018 after an “In Touch” Magazine interview resurfaced in which Clifford described the alleged affair.”

“After initially scheduling Daniels to appear on Fox News’s “Hannity,” Cohen texted Davidson that “the wise men all believe the story is dying and don’t think it’s smart for her to do any interviews.”

“Davidson responded, “100%.” Cohen then said “Thanks pal,” according to the lawsuit.”

“NBC reported that Daniels’ legal team viewed the “wise men” moniker as a reference that Cohen had consulted with Trump about the television appearance.”

“Daniels and Avenatti have remained in the spotlight in the months since it was first reported that Cohen paid her $130,000 as part of a non-disclosure agreement related to her alleged affair with Trump.”

“Daniels is suing to be released from her nondisclosure agreement. She and her lawyer have argued the NDA is void because Trump never signed it.”

“Trump initially denied he knew of the payment, but acknowledged last month that he paid Cohen a monthly retainer that was then used to pay Daniels.”

“Daniels also has filed a defamation lawsuit against Trump after the president called a sketch of a man Daniels claimed threatened her a “con job.” 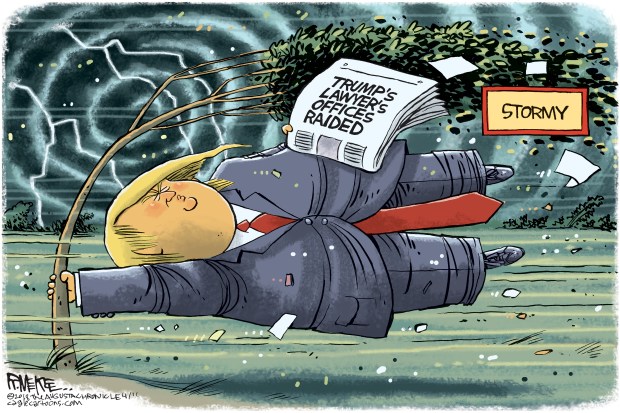 “Cohen, meanwhile, is wrapped up in legal matters of his own. He is reportedly under investigation for bank fraud and campaign finance law violations after the FBI raided his home and office in April.”

“Davidson is reportedly cooperating with prosecutors in that case.”

“Davidson also previously represented former Playboy model Karen McDougal, who also alleged she had an affair with Trump more than a decade ago. McDougal said she is considering whether to take legal action against Davidson for his representation in that case.”