The Inspector General of the US Department of Justice (DOJ), Michael Horowitz has just formally released his 500 page report based on his 18 month long investigation surrounding the FBI’s actions regarding its management of the Hillary Clinton’s email mishandling case while she acted as US Secretary of State between 2009-2013.

The report  is highly critical of the FBI’s Director James Comey’s part in how he acted inappropriately by saying anything publicly about the Hillary Clinton’s email case when he knew she would not be criminally charged which is totally against FBI’s internal rules. But, it was determined that his actions were not politically motivated.

The final determination is that the FBI did not act with bias either for or against the Hillary Clinton’s email case. The investigation was fair.

In fact, any actions taken did damage to the Democratic Party’s Hillary Clinton’s 2016 presidential campaign. Nothing was shared by the FBI agents regarding its Trump Russia probe with the public. In short, it was President Trump who benefited by the FBI’s discretion.

There is coverage of the August 2016 controversial texts between the FBI agent  Peter Strzok, a key investigator on both the Clinton email case and the Trump-Russia probe, and his girlfriend, another FBI lawyer, Lisa Page. One of the texts state, “we’ll stop” Trump from making it to the White House.”

The leaks regarding the FBI agents inappropriately sharing information about the Hillary Clinton’s email mishandling case with outsiders like Rudy Giuliani, is still ongoing.

The big surprise: The IG report did note how Director James Comey used a personal Gmail account for official government business while with the FBI, after leading the investigation into the Hillary Clinton’s use of a private email server.

See:Nine Takeaways From the Inspector General’s Report on the Clinton/ Lawfare .

“The Justice Department inspector general on Thursday (6/14/18) castigated former FBI Director James B. Comey for his actions during the Hillary Clinton email investigation and found that other senior bureau officials showed a “willingness to take official action” to prevent Donald Trump from becoming president.”

“The 500-page report, a copy of which was obtained by The Washington Post, documents major missteps in one of the most politically charged cases in the FBI’s history. It also provides the most exhaustive account to date of bureau and Justice Department decision-making throughout the investigation of Clinton’s use of a private email server, particularly in the months just before she would lose the presidency to Trump.” 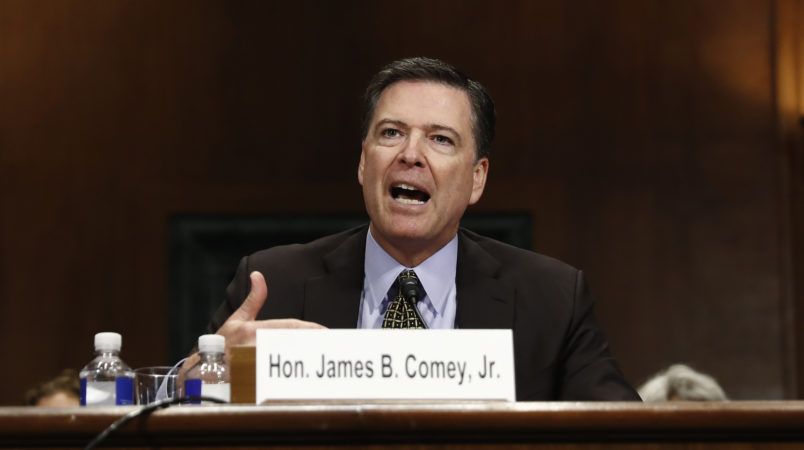 “Though the inspector general condemned individual FBI officials, the report fell significantly short in supporting the assertion by the president and his allies that the investigation was rigged in favor of Clinton. The inspector general found “no evidence that the conclusions by department prosecutors were affected by bias or other improper considerations.” The report acknowledged that certain emails appeared to contain classified information, but investigators determined the FBI’s conclusion that Clinton did not intend to expose classified information was legitimate.”

“The report is a blistering public rebuke of Comey. Inspector general Michael Horowitz accused Comey of insubordination, saying he flouted Justice Department practices when he decided only he had the authority and credibility to make key decisions and speak for the Justice Department.”

“Comey made a “serious error of judgment” in sending a letter to Congress on Oct. 28 announcing he was reopening the investigation of Clinton’s use of the server while secretary of state, the report found, and called it “extraordinary that Comey assessed that it was best” for him not to speak directly with either the Attorney General or the Deputy Attorney General about his decision beforehand.”

“Perhaps the most damaging new revelation in the report is a previously-unreported text message in which Peter Strzok, a key investigator on both the Clinton email case and the investigation of Russia and the Trump campaign, assured an FBI lawyer in August 2016 that “we’ll stop” Trump from making it to the White House.”

“[Trump’s] not ever going to become president, right? Right?!” the lawyer, Lisa Page, wrote to Strzok.

“No he won’t. We’ll stop it,” Strzok responded.

“The report aimed to define once and for all what the FBI and Justice Department did right and what was wrong in the Clinton probe, but partisans are likely to seize on different findings.”

“For Trump, the report provides chapter upon chapter of fresh ammunition for his attacks on the FBI, which he has accused of political bias in investigating whether any of his campaign associates may have conspired with Russia to influence the 2016 election.”

“To Clinton and her supporters, who have long argued that Comey’s decisions robbed her of an election victory, the report will likely be received as bitter vindication of her claims the FBI Director veered far beyond official policy in speaking publicly about her case, and reopening it in the final days before the election.” “The inspector general concluded that Strzok’s text, along with others disparaging Trump, “is not only indicative of a biased state of mind but, even more seriously, implies a willingness to take official action to impact the presidential candidate’s electoral prospects.”

“The messages “potentially indicated or created the appearance that investigative decisions were impacted by bias or improper considerations,” the inspector general wrote.”

“Even that defense, however, undercuts Comey, who had long proclaimed that his investigators “don’t give a rip about politics.”

“The president, who was briefed on the report before it was released publicly, has vigorously criticized Comey and the FBI.”

“Trump is all but certain to use the findings to renew those assaults, and potentially take aim at special counsel Robert S. Mueller III. Strzok served as Mueller’s lead agent on the Russia probe until last July, when he was removed following the discovery of the text messages.”

“David Laufman, who oversaw the Clinton probe as chief of the National Security Division’s Counterintelligence and Export Control Section, said, “The IG report demonstrates that the Justice Department lawyers who conducted the Clinton email investigation carried out their duties with the utmost rigor, professionalism, and integrity.”

“Horowitz also concluded there was no evidence that political bias infected Comey’s thinking, even as he criticized individual steps Comey took. The report, for example, called Comey’s July 2016 public recommendation that Clinton not be charged an “extraordinary and insubordinate” move, because Comey did not even tell then-Attorney General Loretta  Lynch what he was about to do. But it added, “we found no evidence that Comey’s statement was the result of bias or an effort to influence the election.”

“Comey was not the only official to face criticism. The report chided Lynch for indecision after meeting with former president Bill Clinton on the tarmac of the Phoenix airport in the late stages of the campaign. She neither recused herself from the case to avoid the appearance of impropriety, nor did she assert herself more vigorously as Comey seized command.”

“The report similarly raised questions about how the FBI handled the ultimate recusal of the FBI deputy director, Andrew McCabe, from that and other cases because of political donations his wife had received from a group controlled by Terry McAuliffe, a Clinton ally.”

“The messages cast a cloud over the FBI investigations to which these employees were assigned,” Horowitz alleged. “Ultimately the consequences of these actions impact not only the senders of these messages but also other who worked on these investigation and, indeed, the entire FBI.”

“The inspector general wrote that it had referred the information regarding the five individuals who exchanged politically-charged messages “to the FBI for its handling and consideration of whether the messages … violates the FBI’s Offense Code of Conduct.”

“The report took particular aim at FBI officials investigating Clinton’s email server for moving slowly after agents in the New York Field office discovered messages on the laptop of disgraced former Congressman Anthony Weiner that might be relevant to their case.”

“By no later than September 29, the inspector general alleged, the bureau had learned “virtually every fact” it would cite as justification late the next month to search Weiner’s laptop for messages of Clinton and top aide Huma Abedin.”

“The inspector general derided the bureau’s reasons for not moving more quickly — that agents were waiting for additional information from New York, that they couldn’t move without a warrant and that investigators were more focused on the Russia case — as “unpersuasive,” “illogical,” and inconsistent with their assertion that they would leave no stone unturned on Clinton.”

“The report also faulted the bureau for assigning essentially the same personnel to the Russia and Clinton teams, and singled out Strzok, suggesting his anti-Trump views might have played a role in his not acting more expeditiously on the new lead.”

“Under these circumstances, we did not have confidence that Strzok’s decision to prioritize the Russia investigation over following up on the Midyear-related investigative lead discovered on the Weiner laptop was free from bias,” the report said.” 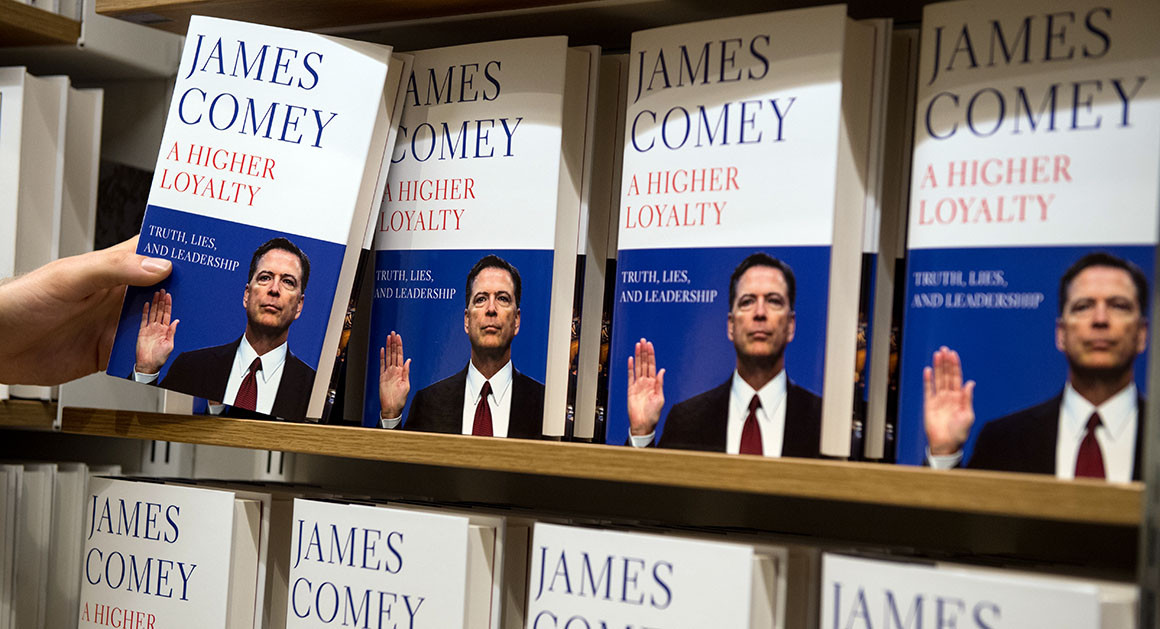 “The discovery is ironic, given that the FBI was exploring Clinton’s own use of a personal email for work related business and whether classified information traversed her server.”

[As Justice Dept. IG moves from Clinton email to Russia and Trump, he risks becoming a political weapon]