aside Politifact: The Truth About US Trade Surpluses And Deficits With Canada

The republican President Donald Trump along with his cabinet including his Commerce Secretary Wilbur Ross and the Director of Trade and Industrial Policy, Peter Navarro are just plain wrong with their plans to impose tariffs on our neighbors like Canada and Mexico and our allies like the (EU) European Union countries and the UK.

We’ve tried implementing tariffs in the past with dire results. The worst experience was with the 1930 Smoot-Hawley Tariff act which was enacted by the US Congress. At the time over 1000 economists signed a letter addressed to their US lawmakers begging them not to pass the tariffs because of the foreseeable negative consequences. But the law makers believed that they knew better. It did not take long for the US economy to tank by 26% to where it took years for the US economy to recover.

The president has not been presenting to the American public the big picture about our trade situation with most countries. There are legitimate trade problems with China but that is not the case with our neighbors and allies. Ordering tariffs on US neighbors and allies on the basis of  US national security interests is not the way to iron out any perceived areas of unfairness. 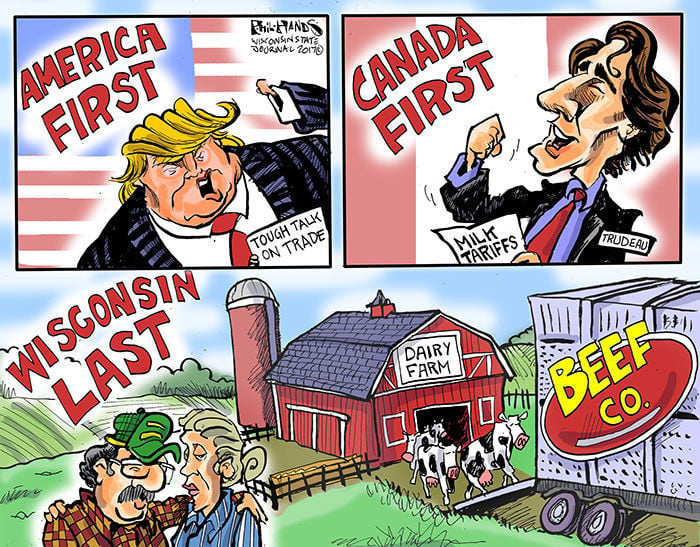 We do have a Trade Deficit with Canada, as we do with almost all countries (some of them massive). P.M. Justin Trudeau of Canada, a very good guy, doesn’t like saying that Canada has a Surplus vs. the U.S.(negotiating), but they do…they almost all do…and that’s how I know!”

We do have a Trade Deficit with Canada, as we do with almost all countries (some of them massive). P.M. Justin Trudeau of Canada, a very good guy, doesn’t like saying that Canada has a Surplus vs. the U.S.(negotiating), but they do…they almost all do…and that’s how I know! 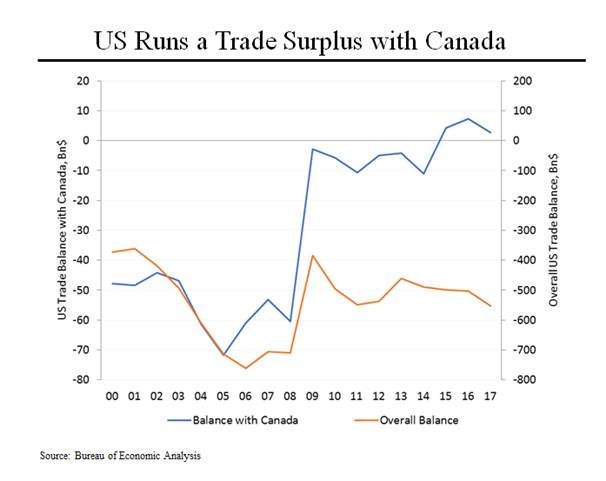 .”Does the United States have a trade deficit with Canada?”

“Trump seems to be referring to a deficit in goods, which tells only part of the picture. (The White House did not respond to an inquiry.)”

“Those unhappy with current trends in trade, such as Trump, tend to highlight the balance of trade in goods, since that subset of trade is the one that shows just how much manufacturing activity the United States has lost to foreign countries in recent years. By contrast, the United States has fared much better in services, which includes finance, insurance, legal services, business consulting and entertainment.” 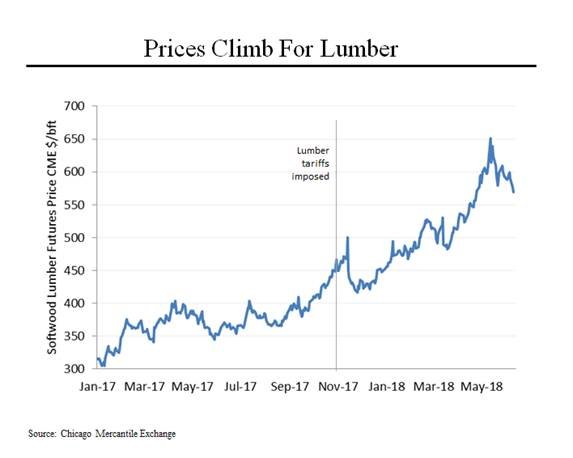 “Over the past 30 years, we have lost jobs in manufacturing, which produces goods, but gained a large number of very good jobs in service sectors and intellectual property,” Matt Gold, an adjunct law professor at Fordham University, told PolitiFact in February. In services, by contrast, “the U.S. dominates the world,” Gold said.”

“There’s a political connection here. Trump garnered significant support in the Rust Belt, which has been hit hard by trade deficits in goods, and he fared poorly in coastal and metropolitan areas that have benefited from the surge in services.” “It’s worth adding that a significant historical driver of the U.S. trade deficit in goods with Canada has been crude oil — a commodity that the United States has usually preferred to buy from Canada when possible, rather than from overseas suppliers that might be subject to greater political instability. It’s also a product for which the United States is increasingly less reliant on foreign sources overall.”

“After you take out oil products from Canada’s exports to the U.S., the U.S. runs a massive trade surplus plus against Canada,” to the tune of $49 billion in 2016, Daniel Trefler, a professor of economic analysis and policy at the University of Toronto’s Rotman School of Management, told PolitiFact in February. “If we are talking about manufacturing jobs, the U.S. is a huge winner.”

“Does the United States have a trade deficit with “almost all countries”?”

“By our calculations, this is incorrect.” 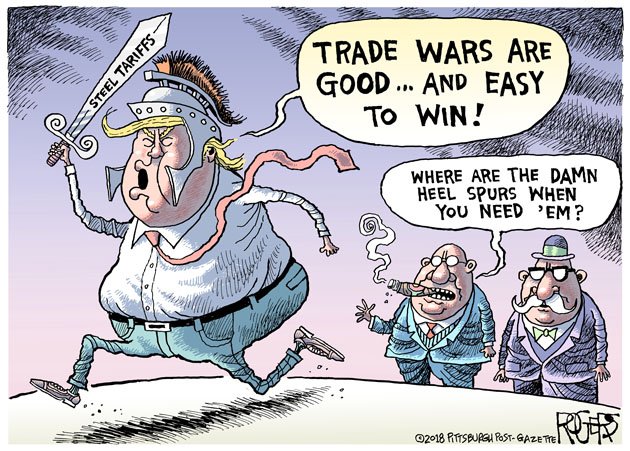 Notably, this data refers to goods only; if we had the data for both goods and services, the percentage might go even higher, given the United States’ general advantage in services. 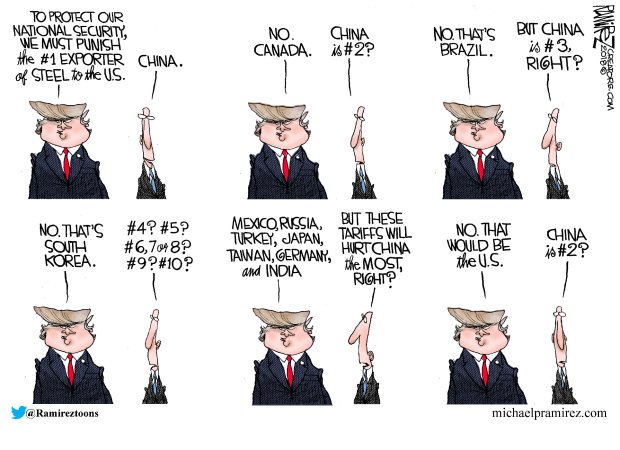 We did find at least six major trading partners with whom the United States had a surplus in 2017 in goods and services: Brazil, Canada, Hong Kong, Saudi Arabia, Singapore and the United Kingdom. The United States also had a sizable surplus with the entire region of South and Central America. 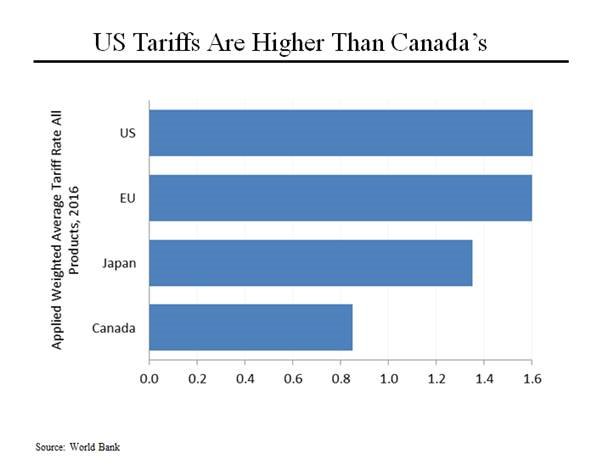 “The 15 countries for whom the U.S. has the largest deficits combine to a cumulative $842.1 billion, which is more than five times larger than the combination of the 15 largest surpluses, at $148.3 billion.”

“So among the United States’ largest trading partners, the biggest deficits are larger than the biggest surpluses. But that’s not what Trump said.”

“A final note: Experts who support free trade say that arguing over deficits and surpluses misses the point.”

“We should be running deficits with some countries and surpluses with others, since comparative advantage will vary, country by country,” said I.M. (Mac) Destler, who teaches at the University of Maryland School of Public Policy.

“Trump tweeted, “We do have a Trade Deficit with Canada, as we do with almost all countries (some of them massive).”

“As for the world at large, Trump is wrong — the United States actually has a surplus with a majority of countries tracked in the official data. However, it’s reasonable to point out that among the biggest trading partners, trade deficits outpace trade surpluses in size.”

We rate the statement Mostly False. 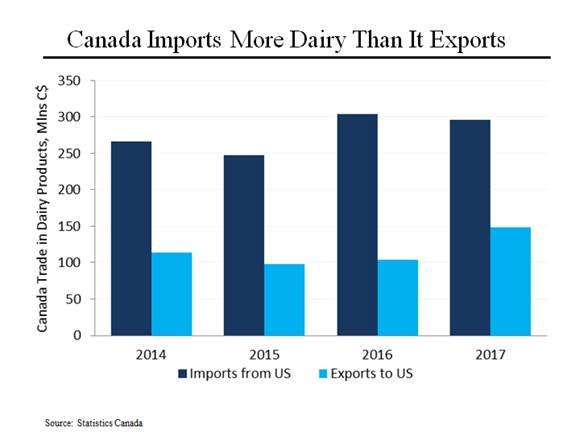 Today’s CPI report confirmed the upward trend in prices. . . and a real wipeout in wage growth