The republican President Donald J. Trump’s former long-time personal attorney/ fixer/ consigliere Michael Cohen has been demonstrating all the signs of preparing to flip against his former boss regarding the FBI’s Trump-Russia probe being led by the Special Counsel Robert Mueller III.

Most recently he has resigned from his fund-raising job with the Republican National Committee (RNC) where his resignation note included a pot shot at the president. He has just hired new attorneys. His in-laws are in the process of selling 3 Trump Tower properties at a value of over $10 million dollars, probably resulting from the president no longer paying his legal bills. He has let it be known that he feels abandoned by his old employer, a man he looked upon as family.

Michael Cohen is that president’s employee who had all of his work locations raided by the FBI on April 9, 2018, and it has been a downward experience for Mr. Cohen, ever since this event. If anyone has the goods on President Trump, he does.

See: We told you Michael Cohen is going to flip on Donald Trump – Palmer …

On June 2018, Aaron Blake of the Washington Post penned the following report, “Did Michael Cohen just drop a hint about flipping on Trump?”

“President Trump’s embattled longtime personal lawyer Michael Cohen just distanced himself from Trump in an unprecedented way. And it’s difficult not to read it as a sign that he might flip on Trump.”

“Cohen just withdrew as a deputy finance chairman of the Republican National Committee. And according to ABC News, his reason includes not just the major federal criminal investigation he faces, but also a policy difference with Trump.”

“As the son of a Polish holocaust survivor, the images and sounds of this family separation policy is heart wrenching,” Cohen wrote in his letter to the RNC. “While I strongly support measures that will secure our porous borders, children should never be used as bargaining chips.”

“Elsewhere in his letter, Cohen offered the more obvious reason for his resignation: the investigation. “This important role requires the full time attention and dedication of each member,” he said. “Given the ongoing Mueller and [Southern District of New York] investigations, that simply is impossible for me to do.”

“Most people reading this will probably be surprised to hear that Cohen hadn’t  already resigned his RNC post for this reason. The investigation is a perfectly plausible reason for him to withdraw and for the RNC to want him to withdraw.”

“The most interesting part of this is that Cohen didn’t stop there. Instead, he saw fit to offer an additional justification unrelated to his legal troubles — and he chose a disagreement with Trump.”

Perhaps he truly feels that strongly because of his family history, which would be totally understandable. But it’s also an extremely curious decision — not least because some other reports Wednesday from the Wall Street Journal and CNN indicate that he isn’t thrilled with his treatment by Trump. He also just hired a new attorney. And it’s all a notable departure from a guy who previously pledged almost complete loyalty to Trump. 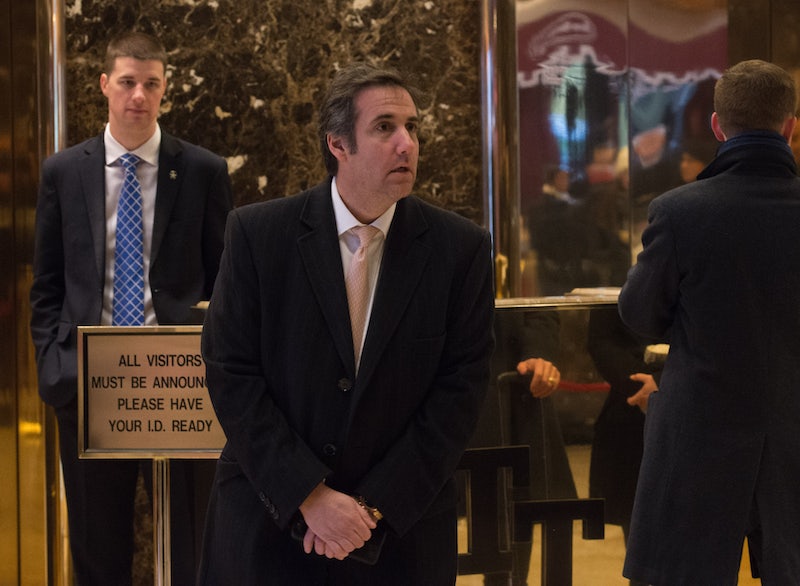 “I’d rather jump out of a building than turn on Donald Trump,” he told a radio station a few months back.

Trump has expressed confidence that Cohen wouldn’t turn on him.

….non-existent “sources” and a drunk/drugged up loser who hates Michael, a fine person with a wonderful family. Michael is a businessman for his own account/lawyer who I have always liked & respected. Most people will flip if the Government lets them out of trouble, even if….

….it means lying or making up stories. Sorry, I don’t see Michael doing that despite the horrible Witch Hunt and the dishonest media!

But nobody says they are going to flip before they flip. At the least, Cohen may be sending up a trial balloon — a signal that his loyalty to Trump isn’t as absolute as it once was, and that perhaps Trump should do something to regain that loyalty (a pardon?). Cohen had to know that registering this policy difference would lead to this kind of speculation, even if he’s not necessarily committed to flipping.