I can see the temptation to act out against the republican President Donald Trump’s cabinet members as they have hit hard on good people’s emotions. The president’s recent immigration orders which resulted in the forcible removal of children from parents seeking asylum at the southwestern US border has enraged the vast majority of Americans. We keep saying that this is not what the USA represents.But resorting to uncivil behaviors towards the president’s team members as they are out with family, just ends up playing into President Trump’s hands.  Those who give into the very understandable need to respond in kind to the president’s bullying manipulations will only end up looking like him, which is definitely a losing proposition.

I’m talking about recent events like when the president’s spokesperson Sarah Huckabee Sanders with her family went out to eat but she was asked politely by a restaurant owner of the Red Hen to please leave the premises. Then there was the US Department of Homeland Security’s Secretary Kirstjen Nielsen who was heckled to where she was forced to leave a Mexican Restaurant.

To add to these raw emotions, the popular US democratic congressperson Maxine Waters went public to encourage the above kinds of actions as a form of civil protest. 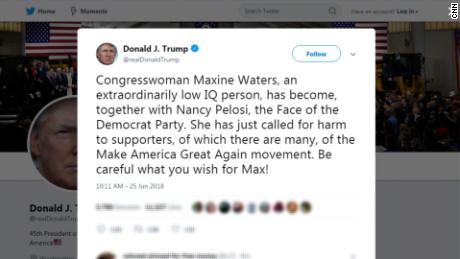 I admit to having conflicting feelings about Rep. Waters advice. After all I admire her spunk but based on a lot of thought, I come down on the side of not harassing the president’s staffers as they are out for a quiet evening.

President Trump has this habit of baiting peoples on the left to invoke outrage with any number of over-the-top declarations which his base of voters just love. In doing this he controls the message. We have heard him describe the democrats as being in favor of open borders where criminals can cross over the southern US border to just take advantage.

The democrats have to constantly call out the president and his republicans in the US Congress who cover for his lack of civility. We should be pointing the finger in his direction.

But it is important for the Democrats to focus the media on responding to the president’s lies with facts.

Then the democrats should define the president’s actions. For example, the president should be made to explain why he doesn’t just sign an executive order to make all employers verify that their personnel are here in the USA legally, with the free service of “E-Verify”provided by the “US government. This step can be done when the managers provide the required data of each worker to the US Social Security Administration. The last time I checked, only about 50% of corporations take advantage of this service.  If all companies were mandated to to take this step, that would be a major inexpensive way to end migrants being economically  motivated to cross the US border in search of better paying jobs.

This should be followed up with inquiries as to why the vast majority of the president’s seasonal employees for all his hotel and  golf course properties, are staffed with foreign HB2 visa workers instead of Americans.

The next question would be, why is the president not focusing on the huge numbers of undocumented workers who have overstayed their visas which accounts for about 50% of all illegal immigrants.

Then the democrats need to educate the public that the majority of migrants crossing the southwest US border are refugees from El Salvador, Honduras and Guatemala who are definitely NOT CRIMINALS.

The stories of some of these refugee families should be shared. One of my blogging family Nan tells about a refugee family’s nightmare.

She read a report “about a Central American father who went to the authorities in an attempt to get drugs out of their neighborhood? The drug dealers found out and were going to kill him and his family for turning them in. The family had no choice but to run. When the drug dealers found out their landlord had helped them get away, they killed him!”

“THIS is what many of these people are running from … and what they will face if they are forced to return.”

“A San Pedro man is expected to plead guilty Wednesday to threatening to kill Rep. Maxine Waters over her criticism of President Trump.”

“Anthony Scott Lloyd, 45, faces a single count of threatening a United States official, according to a plea agreement filed March 26. It is punishable by up to 10 years in prison and a $250,000 fine.” “According to the plea, Lloyd left a voicemail at Waters’ Capitol Hill office Oct. 22 using a racial slur to refer to Waters and an anti-gay slur, and stating that “if you continue to make threats towards the president, you’re going to wind up dead, Maxine, ’cause we’ll kill you.”

“Waters’ staff forwarded the voicemail to Capitol Police, who referred it to the FBI.”

“According to the original complaint, Lloyd told the FBI that he was listening to talk radio and it was a “spur of the moment” decision to call Waters and leave the voicemail. Lloyd also told the FBI he had no intention of actually harming her.”