On the 11th day of July 2018, the republican US President Donald J. Trump started off demonstrating the sheer depth of his bulling style by berating NATO officials for its member countries not paying more towards their defense expenditures. It made no difference when others reminded him that most countries are contributing more and that almost all have agreed to coffer up 2% of GDP by 2024-2030 as had been previously promised. Later the president countered that the countries should start paying their fair share of 2% immediately and that should work towards a goal of 4%.

It sounds like President Trump cannot accept a win which makes those observing the president’s posturing wonder, what his real motives are. Is he acting to create a confrontation to where the president can then announce the arbitrary decision to have the US leave NATO as a member country? 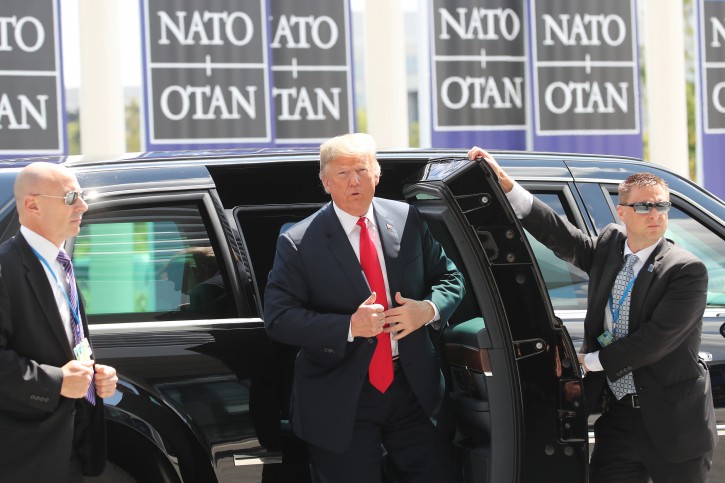 Later, President Trump acting as the US bully/ misogynist-in-chief started targeting his European nemesis, the German Chancellor Angela Merkel for his ire. He went on a rag which appears to reflect his thinking, dating as far back as March 26, 2016 as per a New York Times report, “Transcript: Donald Trump Expounds on His Foreign Policy Views”

(His 2016 analysis as detailed in the NYT report seems to conflate the issues over Ukraine, US sanctions against Russia and Germany being involved in trade with Russia over energy.)

“It has to be changed from the standpoint of cost because the United States bears far too much of the cost of NATO. And one of the things that I hated seeing is Ukraine. Now I’m all for Ukraine, I have friends that live in Ukraine, but it didn’t seem to me, when the Ukrainian problem arose, you know, not so long ago, and we were, and Russia was getting very confrontational, it didn’t seem to me like anyone else cared other than us. And we are the least affected by what happens with Ukraine because we’re the farthest away. But even their neighbors didn’t seem to be talking about it. And, you know, you look at Germany, you look at other countries, and they didn’t seem to be very much involved. It was all about us and Russia. And I wondered, why is it that countries that are bordering the Ukraine and near the Ukraine – why is it that they’re not more involved? Why is it that they are not more involved? Why is it always the United States that gets right in the middle of things, with something that – you know, it affects us, but not nearly as much as it affects other countries. And then I say, and on top of everything else – and I think you understand that, David – because, if you look back, and if you study your reports and everybody else’s reports, how often do you see other countries saying ‘We must stop, we must stop.” They don’t do it! And, in fact, with the gas, you know, they wanted the oil, they wanted other things from Russia, and they were just keeping their mouths shut. And here the United States was going out and, you know, being fairly tough on the Ukraine. And I said to myself, isn’t that interesting? We’re fighting for the Ukraine, but nobody else is fighting for the Ukraine other than the Ukraine itself, of course, and I said, it doesn’t seem fair and it doesn’t seem logical.”

See: Brussels prepares to bite back at US over Russia sanctions – POLITICO-2017

On July 11, 2018, Ewen MacAkill of the Guardian penned the following report, “Angela Merkel hits back at Donald Trump at NATO summit” (“Germany makes independent decisions, chancellor says in response to claim it is controlled by Russia.”)

“Angela Merkel has pushed back against Donald Trump’s extraordinary tirade against Germany on the first day of the Nato summit in Brussels, denying her country was “totally controlled” by Russia and saying it made its own independent decisions and policies.”

“In less blunt language than the US president’s, the German chancellor made the point that she needed no lessons in dealing with authoritarian regimes, recalling she had been brought up in East Germany when it had been part of the Soviet Union’s sphere of influence.”

“Arriving at Nato headquarters only hours after Trump singled out Germany for criticism, Merkel said: “I have experienced myself how a part of Germany was controlled by the Soviet Union. I am very happy that today we are united in freedom, the Federal Republic of Germany. Because of that we can say that we can make our independent policies and make independent decisions. That is very good, especially for people in eastern Germany.”

“She also hit back at Trump’s criticism that Germany contributed  little to European defense. “Germany does a lot for Nato,” she said.”

“Germany is the second largest provider of troops, the largest part of our military capacity is offered to Nato and until today we have a strong engagement towards Afghanistan. In that we also defend the interests of the United States.”Earlier the US president had accused Berlin of being a “a captive of the Russians” because of its dependence on energy supplies.”

“At his first meeting of the summit, with the Nato secretary general, Jens Stoltenberg, Trump described the relationship between Germany and Russiaas “inappropriate”.

“Nato officials had been nervously awaiting the first meeting as an indicator of how Trump – who arrived in Brussels on Tuesday night – would behave over the next two days. Within minutes they had their answer.”

“This summit is shaping up to be the most divisive in Nato’s 69-year history. Normally, Nato summits are mostly fixed in advance and proceed in an orderly fashion. Trump’s first words signalled this one was not going to be like that.”

“He complained that German politicians had been working for Russian energy companies after leaving politics and said this too was inappropriate. Germany was totally controlled by Russia, Trump said.”

“With Stoltenberg looking on uncomfortably throughout, the US president was unrelenting. “I think it is very sad when Germany makes a massive oil and gas deal with Russia,” Trump said. “We are supposed to be guarding against Russia, and Germany goes out and pays billions and billions dollars a year to Russia.”

“He added: “It should never have been allowed to happen. Germany is totally controlled by Russia because they will be getting 60-70% of their energy from Russia and a new pipeline.”

“You tell me if that’s appropriate because I think it’s not. On top of that Germany is just paying just a little bit over 1% [of GDP on Nato defence contributions] whereas the United States is paying 4.2% of a much larger GDP. So I think that’s inappropriate also.”

“Germany’s plan to increase its defence expenditure to the Nato target of 2% of GDP by 2030 was not good enough, Trump said. “They could do it tomorrow.”

“Stoltenberg seemed surprised by the force of Trump’s remarks. He attempted to respond, saying mildly: “Even during the cold war, Nato allies were trading with Russia.”

“Asked about Trump afterwards, he responded diplomatically, restricting himself to saying the US president’s language had been “direct” and “frank”.

“Merkel and Trump have a one-to-one meeting scheduled for later on Wednesday. According to (US) reports, Trump is keen to see Merkel replaced as chancellor. “