It should be no surprise that the Russian media is crowing over how its President Vladimir Putin appeared to be in command of the stage with the US President Donald Trump being very accommodating at their 7/16/18 Helsinki joint press conference.

It is well known that President Trump enjoys watching TV. He needs to see the Russian TV tapes where he isn’t being presented in a flattering light. It would be beneficial for the president to face what his intelligence experts had been trying to prevent.

As per a 7/18/18 ThinkProgress report by Frank Dale, “According to reporter and Russian media analyst Julia Davis, Russia’s state television accused the President of the United States of “licking Putin’s boots” during Monday’s press conference:” 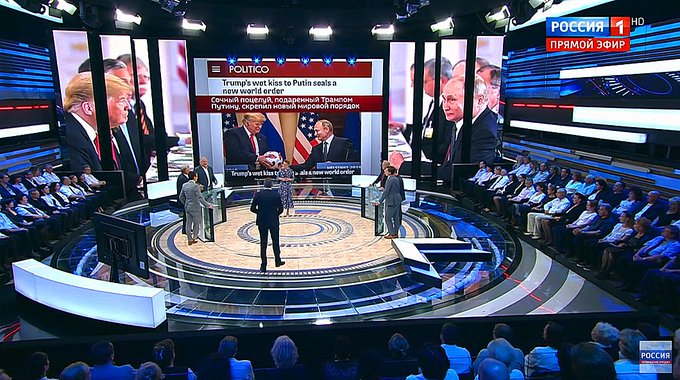 #Russia‘s state TV:
The host: “Let’s analyze Trump’s performance at the presser. At which point in time could you say he was licking Putin’s boots? Why did @Schwarzenegger describe him as a wet noodle?… He said nothing about the annexation, [Russian] aggression or #Skripal.”

Then Russian state TV suggested that Trump “really smells like an agent of the Kremlin”: 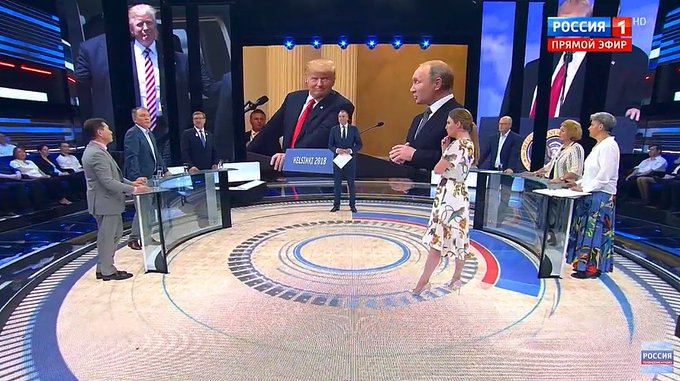 #Russia‘s state TV host:
“It is very bizarre, you can’t bash your own country like that – especially when you’re the President.”
Female host: “When Trump says our relations are bad because of American foolishness and stupidity, he really smells like an agent of the Kremlin.”

Twitter Ads
“Following Trump’s attempted clean-up on Tuesday, Russian media speculated that Trump only tried to reverse course due to the intense criticism of his remarks:” 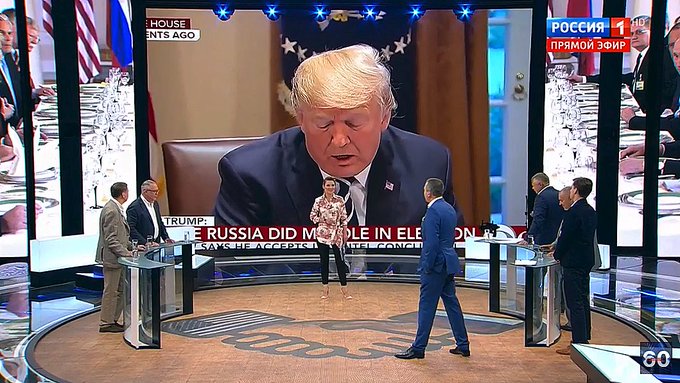 #Russia‘s state TV:
The Russians scoff at Trump’s attempt to “correct” what he said @ the #HelsinkiSummit.
Sergey Fedorov: “It’s very simple. First time, he said what he thought. Then he got back to the Oval Office, discovered a hysterical reaction & realized he overdid it.”

Excerpts:
“Steve Hall, a former CIA station chief in Moscow, issued a chilling warning on CNN’s “Anderson Cooper 360″ on Thursday — which if it is borne out would have unfathomable political consequences.”
“Before the Helsinki summit, I was not prepared to go to the darkest corner in the room and say there is kompromat — there is compromising information — on Donald Trump,” Hall said.”
“After … I saw Donald Trump treat (Putin) in a fashion that is just inexplicable, the only conclusion that I can come to is … I think there is information and data out there that implies there is indeed compromising information that Vladimir Putin has on Donald Trump. Why else would he treat him that way?”
“In Aspen, Coats’ good humor masked the troubling implications of the fact that the nation’s top intelligence chief found out from a reporter, on live television, that the Russian President had been invited to visit Washington, amid the uproar over what happened in Helsinki.”

“First of all, it was humiliating for Coats, just days after Trump preferred Putin’s “very strong and powerful” denials of election interference over the assessment of Russia’s culpability that had been delivered to him by the DNI before he went to Finland.”
“At best, it was an example of rank incompetence by the White House — since the failure to give Coats prior notice of the announcement was deeply embarrassing to a senior intelligence official ostensibly speaking on behalf of the government.”
“But such is Trump’s contempt for US intelligence agencies and their conclusions on Russian election interference that it could not be ruled out Coats was deliberately hung out to dry, after he reiterated warnings that Russia is still interfering in US democracy.”

Trump doubles down with Putin invitation

“Coats’ humiliation, however, was not the most troubling development on another stunning day of reverberations from the Helsinki summit, on which Trump moved on from haphazard cleanup efforts to a defiant counterattack that was embodied by the Putin invitation.”

“Coats also revealed that he still did not know what had gone on in the nearly two-hour-long meeting in Finland, when the two Presidents met alone with only interpreters present. The disclosure indicates that the contents of Trump’s meeting are still a mystery at top levels of his own government — which in turn suggests a lack of a normal policy process and sheds new suspicion on the mysterious hold the Russian leader exerts over the US President.”
“In effect, the appearance by Coats was a direct challenge to Trump — the kind of show of independence and defiance that typically does not sit well with the President.”
“At the end of Coats’ appearance in Aspen there were new questions about how long he could survive in his job — or even if he was actively daring the President to fire him.”
“The prospect that Putin could visit Washington is staggering in itself — but it is consistent with Trump’s practice of doubling down in a fight and refusing to cede ground to his critics, in this case those who believe that Helsinki was a debacle.”

“A Putin visit will be controversial because it will bring a US adversary accused of master-minding a scheme to help put Trump into power to the United States at about the same time as midterm elections that US spy agencies say are already falling victim to “Moscow’s meddling.”
“US national security analyst and military historian Max Boot agreed with the premise that the failure to notify Coats of the invitation smacked of White House incompetence but also suggested that “something more sinister and nefarious” was going on.”
“Donald Trump is now being investigated by the FBI for colluding with Vladimir Putin to affect the 2016 US election, and now, he is effectively colluding with Putin right now, meeting privately with Putin,” Boot said on CNN’s “Erin Burnett Out Front.”
“Boot bemoaned the probability that senior officials don’t know what Trump agreed to in the private head-to-head in Helsinki — even as Russia begins to dribble out details.”
“The top people in the US government who ought to know, including Director Coats, they don’t know.” he said. “Putin knows but Director Coats doesn’t know — that is wrong, especially given the highly suspect relationship between Donald Trump and Vladimir Putin.”
“The Coats drama overshadowed another head-spinning development following Helsinki, as the White House backtracked on its previous statement that it was considering an offer by Putin that Trump called “incredible” — to send US officials to Moscow for questioning.”
“Putin suggested at the summit that in return for FBI agents traveling to Moscow to interview suspects accused of election interference, Washington should make the Obama-era ambassador to Moscow, Michael McFaul, who Putin regards as an enemy, available to Russian investigators.”
“The White House reversed course only hours before the Senate, in a rare bipartisan show of resistance, voted 98-0 to pass a resolution condemning the idea.”
“Even when announcing the climbdown, the White House showed unusual deference to Putin.”“Trump’s spokes-woman Sarah Sanders said the proposal was made “in sincerity by President Putin, but President Trump disagrees with it.”
Link to entire article: Putin invite sends Washington into Russian twilight zone