This story deserves more coverage in the US media. What the republican President Donald Trump and his sycophants are doing to the US Department of Veteran’s affairs and its hospital facilities (VHA) is an outrage. It is counter to his rhetoric of how much he loves and honors the men and women serving in the US military. But he likes the show, like his upcoming military parade to be held in the Fall of 2018. How about a little substance for a change?

Our military veterans deserve so much better. All of the veteran groups oppose the current management and the direction that the president’s cohorts are taking the VHA except for one, comprised of conservatives and backed financially by right wing organizations like the Koch brothers,  Concerned Veterans for America  (CVA).

On August 7, 2018, Isaac Arnsdorf of ProPublica penned the following report, “The Shadow Rulers of the VA” (“How Marvel Entertainment chairman Ike Perlmutter and two other Mar-a-Lago cronies are secretly shaping the Trump administration’s veterans policies.”)

“Last February, shortly after Peter O’Rourke became chief of staff for the Department of Veterans Affairs, he received an email from Bruce Moskowitz with his input on a new mental health initiative for the VA. “Received,” O’Rourke replied. “I will begin a project plan and develop a timeline for action.”

“O’Rourke treated the email as an order, but Moskowitz is not his boss. In fact, he is not even a government official. Moskowitz is a Palm Beach doctor who helps wealthy people obtain high-service “concierge” medical care.”

“More to the point, he is one-third of an informal council that is exerting sweeping influence on the VA from Mar-a-Lago, President Donald Trump’s private club in Palm Beach, Florida. The troika is led by Ike Perlmutter, the reclusive chairman of Marvel Entertainment, who is a longtime acquaintance of President Trump’s. The third member is a lawyer named Marc Sherman. None of them has ever served in the U.S. military or government.”

“Yet from a thousand miles away, they have leaned on VA officials and steered policies affecting millions of Americans. They have remained hidden except to a few VA insiders, who have come to call them “the Mar-a-Lago Crowd.”

“Perlmutter, Moskowitz and Sherman declined to be interviewed and fielded questions through a crisis-communications consultant. In a statement, they downplayed their influence, insisting that nobody is obligated to act on their counsel. “At all times, we offered our help and advice on a voluntary basis, seeking nothing at all in return,” they said. “While we were always willing to share our thoughts, we did not make or implement any type of policy, possess any authority over agency decisions, or direct government officials to take any actions… To the extent anyone thought our role was anything other than that, we don’t believe it was the result of anything we said or did.”

“VA spokesman Curt Cashour did not answer specific questions but said a “broad range of input from individuals both inside and outside VA has helped us immensely over the last year and a half.” White House spokeswoman Lindsay Walters also did not answer specific questions and said Perlmutter, Sherman and Moskowitz “have no direct influence over the Department of Veterans Affairs.”

“But hundreds of documents obtained through the Freedom of Information Act and interviews with former administration officials tell a different story — of a previously unknown triumvirate that hovered over public servants without any transparency, accountability or oversight. The Mar-a-Lago Crowd spoke with VA officials daily, the documents show, reviewing all manner of policy and personnel decisions. They prodded the VA to start new programs, and officials travelled to Mar-a-Lago at taxpayer expense to hear their views. “Everyone has to go down and kiss the ring,” a former administration official said.”

“If the bureaucracy resists the trio’s wishes, Perlmutter has a powerful ally: The President of the United States. Trump and Perlmutter regularly talk on the phone and dine together when the president visits Mar-a-Lago. “On any veterans issue, the first person the president calls is Ike,” another former official said. Former administration officials say that VA leaders who were at odds with the Mar-A-Lago Crowd were pushed out or passed over. Included, those officials say, were the secretary (whose ethical lapses also played a role), deputy secretary, chief of staff, acting under secretary for health, deputy under secretary for health, chief information officer, and the director of electronic health records modernization.”

“At times, Perlmutter, Moskowitz and Sherman have created headaches for VA officials because of their failure to follow government rules and processes. In other cases, they used their influence in ways that could benefit their private interests. They say they never sought or received any financial gain for their advice to the VA.”

“The arrangement is without parallel in modern presidential history. The Federal Advisory Committee Act of 1972 provides a mechanism for agencies to consult panels of outside advisers, but such committees are subject to cost controls, public disclosure and government oversight. Other presidents have relied on unofficial “kitchen cabinets,” but never before have outside advisers been so specifically assigned to one agency. During the transition, Trump handed out advisory roles to several rich associates, but they’ve all since faded away. The Mar-a-Lago Crowd, however, has deepened its involvement in the VA.”

Perlmutter, 75, is painstakingly private — he reportedly wore a glasses-and-mustache disguise to the 2008 premiere of “Iron Man.” One of the few public photographs of him was snapped on Dec. 28, 2016, through a window at Mar-a-Lago. Trump glares warily at the camera. Behind him, Perlmutter smiles knowingly, wearing sunglasses at night.”

“When Trump asked him for help putting a government together, Perlmutter offered to be an outside adviser, according to people familiar with the matter. Having fought for his native Israel in the 1967 war before he moved to the U.S. and became a citizen, Perlmutter chose veterans as his focus.”

“Perlmutter enlisted the assistance of his friends Sherman and Moskowitz. Moskowitz, 70, specializes in knowing the world’s top medical expert for any ailment and arranging appointments for clients. He has connections at the country’s top medical centers. Sherman, 63, has houses in West Palm Beach and suburban Baltimore and an office in Washington with the consulting firm Alvarez & Marsal. His legal work focuses on financial fraud, white collar investigations and damages disputes. His professional biography lists experience in eight industries, none of them related to health care or veterans.”

“Moskowitz and Sherman helped Perlmutter convene a council of health care executives on the day of the Trump-Perlmutter photograph, Dec. 28, 2016. Offering more private healthcare to vets was a signature promise of Trump’s campaign, but at that point he hadn’t decided who should lead an effort that would reverse the VA’s longstanding practices.”

“A new name surfaced in that meeting: David Shulkin, who’d led the VA’s health care division since 2015. Perlmutter then recommended Shulkin to Trump, according to a person familiar with his thinking. (Shulkin did not respond to requests for comment.)”

“Once nominated, Shulkin flew to Mar-a-Lago in early February 2017 to meet with Perlmutter, Sherman and Moskowitz. In a follow-up email a few days later, Moskowitz elaborated on the terms of their relationship. “We do not need to meet in person monthly, but meet face to face only when necessary,” he wrote. “We will set up phone conference calls at a convenient time.” 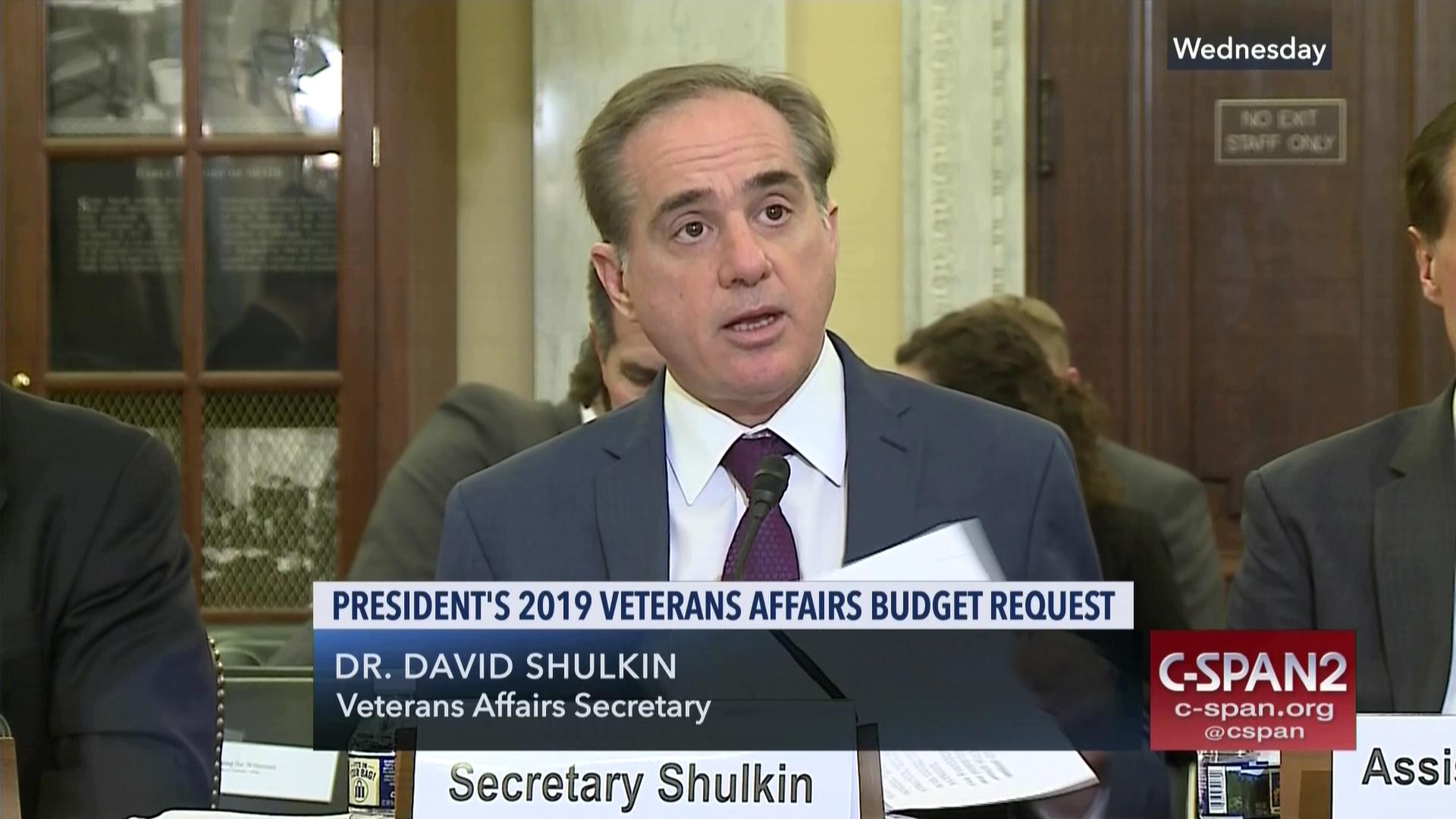 Shulkin responded diplomatically. “I know how busy all of you are and having you be there in person, and so present, was truly a gift,” he wrote. “I found the time we spent, the focus that came out of our discussions, and the time we had with the President very meaningful.”

It wasn’t long before the Mar-a-Lago Crowd wore out their welcome with Shulkin. They advised him on how to do his job even though they sometimes seemed to lack a basic understanding of it. Just after their first meeting, Moskowitz emailed Shulkin again to say, “Congratulations i[t] was unanimous.” Shulkin corrected him: “Bruce- this was not the confirmation vote- it was a committee vote- we still need a floor vote.”

Link to entire article: The Shadow Rulers of the VA