Two key players from the world of the republican President Donald Trump, going back at least two decades are Allen Weisselberg, the Chief Financial Officer (CFO) of the Trump Organization and David Pecker, the CEO for AMI which includes The National Enquirer, have been granted immunity by the FBI. At the very least, they will be required to give testimony regarding the hush monies, the president has paid to former mistresses to keep quiet his extra-marital affairs that could have derailed his chances to become the US president in 2016.

It is important to note, that the FBI doesn’t grant individuals immunity, unless they are guilty of some criminal wrong doing and where they possess significant information that would be considered helpful in the FBI’s Trump-Russia probe being led by the Special Counsel Robert Mueller III.

As for Mr. Weisselberg, he has been with the Trump Organization since he graduated college since the 1970s. Over the following years he climbed the ladder to become the Trump Organization’s CFO. Both the president and his CFO are infamous for their micro-management style which means both were well versed as to every penny spent. This makes the news of his being granted immunity for his testimony, in the category of potential block busting news.

As for Mr. David Pecker, a long time friend and supporter to President Trump, the NYC tabloids are all abuzz about the documents related to all things Trump which were contained in a safe under the possession of Mr. Pecker.

“Allen Weisselberg, longtime chief financial officer for the Trump organization, has been granted immunity by federal prosecutors for providing information about Michael Cohen and the 2016 payments he made to two women during the 2016 presidential campaign who alleged they had sexual encounters with the president, the Wall Street Journal reports.”

Why it matters: “This is a very significant story that’s already causing waves in the legal circles around the White House. Unlike Cohen, who was involved in quixotic projects and sleazy side deals to hush up women, Weisselberg has true and deep visibility into the Trump Organization. Trumpworld’s greatest fear is that U.S. District Court for the Southern District of New York (SDNY) investigators will start prying deeper into the president’s business affairs. And Trump can’t shut down such an investigation by firing Robert Mueller.”

The bottom line: “If there are any fishy payments for any purpose going back decades, Weisselberg would know about them. That’s why Trumpworld is on high alert about this. Concerned texts are flying around now from sources in the President’s orbit.” 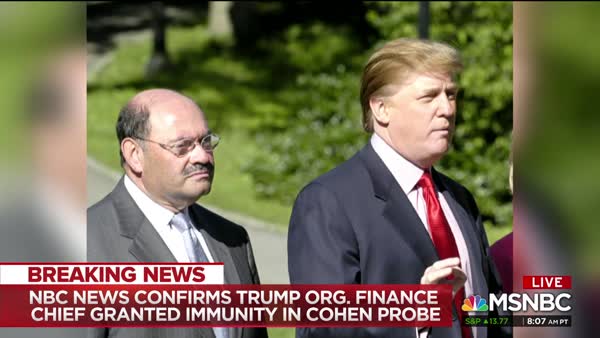 Be smart: “A top Washington white collar attorney told Axios that this“could be really big deal but unclear if it’s limited to past Cohen stuff which culminated in his plea or if it’s ongoing. But clearly prosecutors thought he had something of value in return for giving immunity. There had to be some ‘showing’ by his counsel to get the immunity.”