What’s The Matter With The US GOP Senator Lindsey Graham From South Carolina?

Dear Resistance Readers, please take time after the Labor Day weekend to contact the republican Senator Lindsey Graham of South Carolina to inform him that his turncoat stance against everything his late friend Senator John McCain represented, has been noticed.

Don’t let Senator Graham think for one moment that his kowtowing to the man in the White House, the antitheses of everything his friend Senator McCain stood for, is acceptable from a supposed GOP leader. This is the president who ridiculed Senator McCain for his years as a Vietnam POW.

Frankly, I hope that the FBI is investigating Senator Lindsey with regards to Russia because that is the only plausible explanation for his betrayal of his BFF. Any other reasoning is simply, a disgrace to his position and his character. In the past, Senator Graham has admitted that his emails were hacked by Russia. 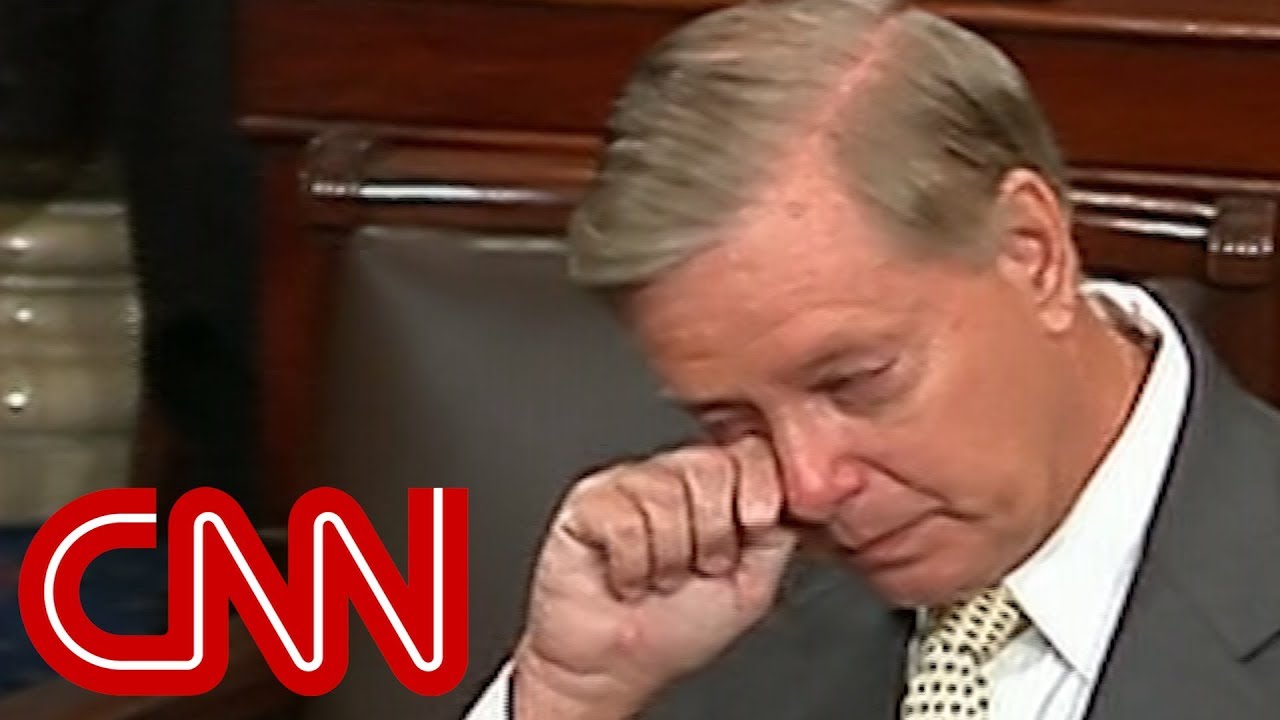 “We lost 2 mavericks within a week.”

“Graham remains alive and well, but after serving for two decades as Robin to McCain’s Batman, Graham buried whatever remained of his own reputation for iconoclasm even before his partner’s funeral.” 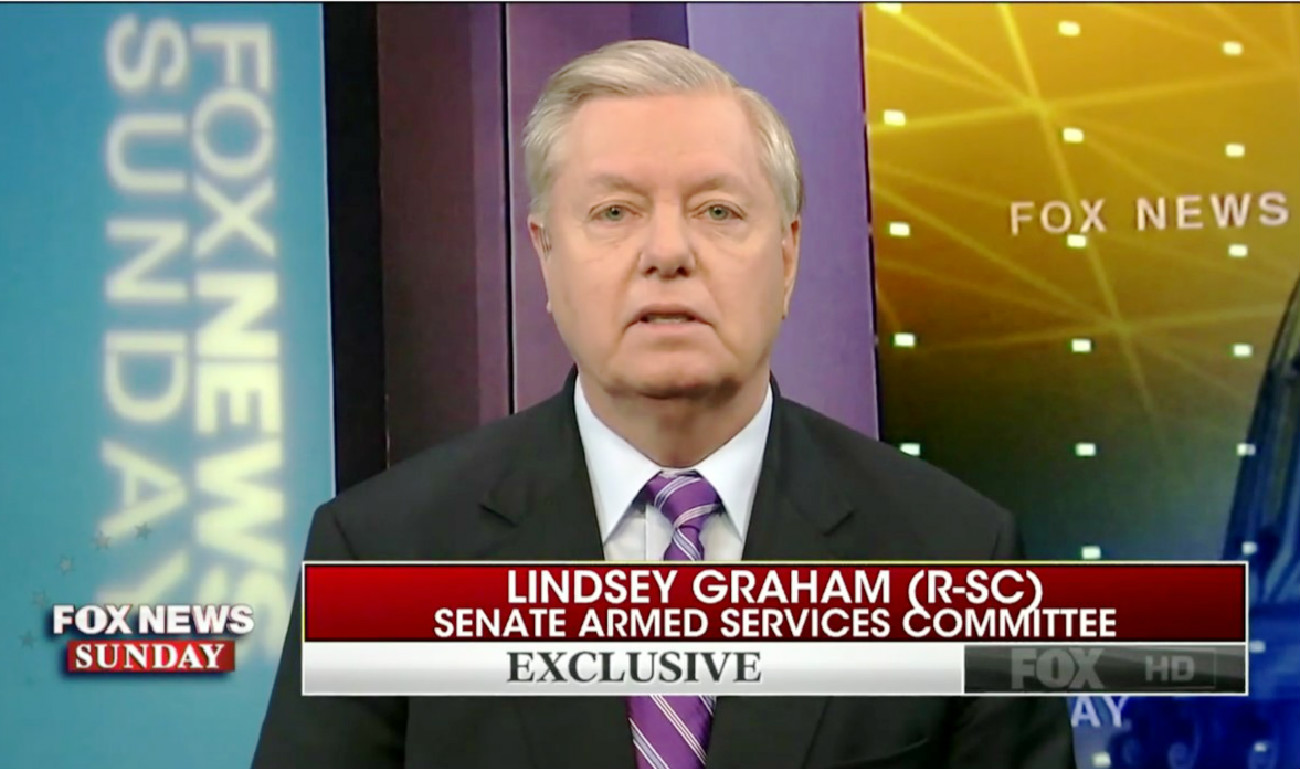 “On Tuesday, Graham took a seat on the couch of “Fox & Friends,” President Trump’s favorite show, and sealed his transition from apostate to Trump apparatchik.”

“Word of caution to the public,” he said. “A lot of people try to convict President Trump. Don’t be so fast. I have seen no evidence of collusion after two years.” Having echoed Trump’s no-collusion line (as if that were the lone issue), Graham, a former military lawyer, picked up Trump’s attack on the justice system: “Plenty of corruption at the Department of Justice and the FBI. Should be stunning. Not one Democrat seems to care.”

“From there, the South Carolina Republican echoed all of Trump’s attacks against the Russia investigation: “They had a bias against Trump for [Hillary] Clinton . . . They gave a politically corrupt document to get a warrant . . . Christopher Steele was on the payroll of the Democratic Party.” He parroted Trump’s line that Russian President Vladimir Putin tried to help Clinton, not Trump: “Russia was involved in our election . . . in terms of developing this dossier.”

“Incredibly, Graham even joined the “lock her up” movement. “No American would get the same treatment she did. If you were charged or suspected of this kind of misconduct, you would be in jail now.”

“Sarah Huckabee Sanders, the White House press secretary, could not have said it better.’

“This came after Graham abandoned his previous support of Attorney General Jeff Sessions, whom Trump wants to fire as a likely precursor to ending special counsel Robert S. Mueller III’s Russia investigation. A year ago, Graham declared himself “100 percent behind Jeff Sessions” and vowed “holy hell” if Sessions was fired.”

“But now, Graham says “we need an attorney general that can work with the president.” This week, he even alleged on CBS News that Sessions “blindsided” Trump with “zero-tolerance” family separations — as though that policy wasn’t a Trump signature.”

“Graham previously described Trump as a “jackass” and “unfit for office.” He began his pivot after the election, but intensified his embrace of Trump as illness kept McCain from Washington. “If you don’t like me working with President Trump to make the world a better place, I don’t give a shit,” he said on CNN in June. This week, he demurred on renaming a Senate building for his friend, and though displeased by Trump’s posthumous insults of McCain, he said it is the president’s right “to feel any way he’d like.” 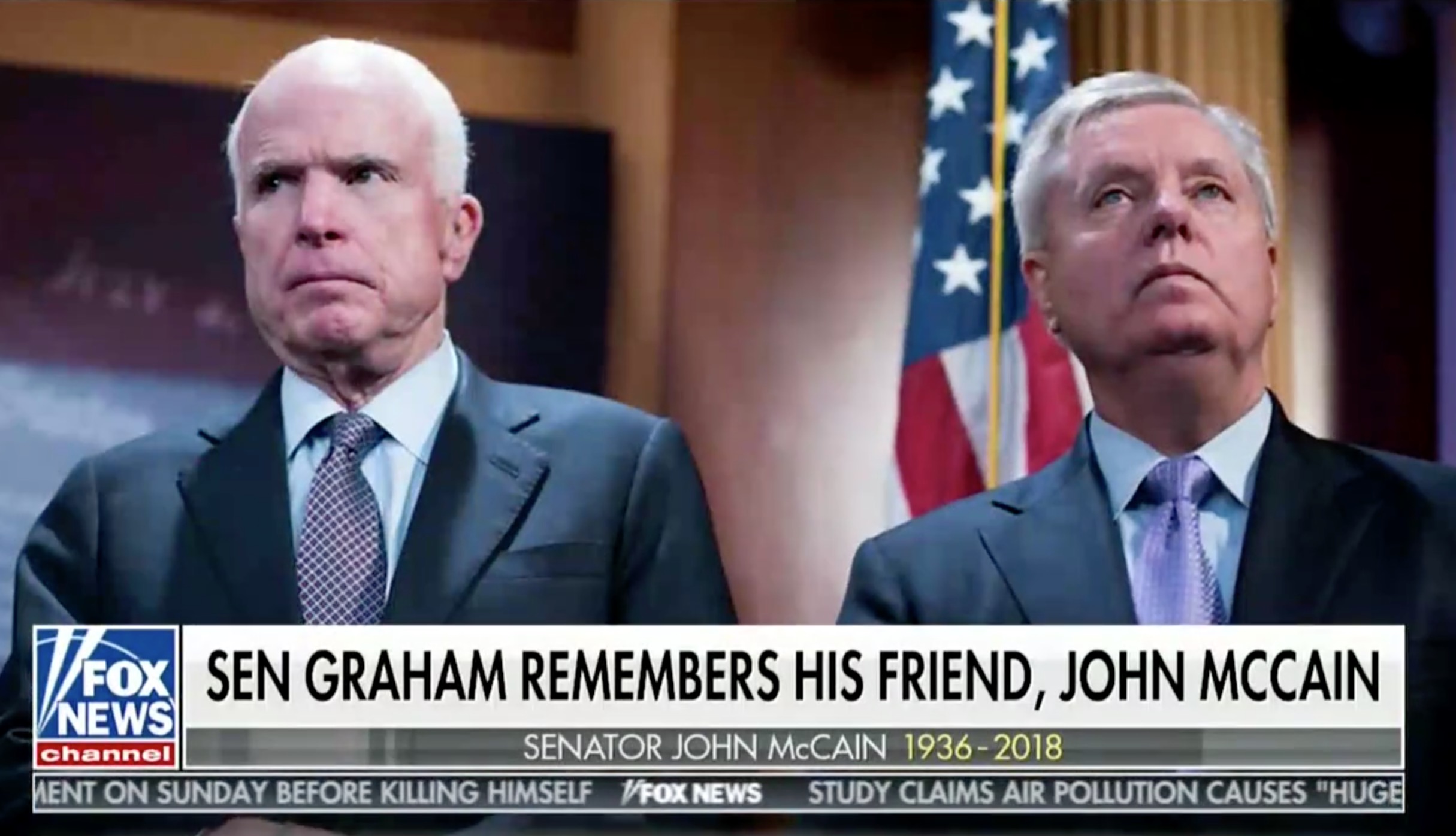 “No longer protected by McCain, he seems to have lost that famous McCain courage. It is difficult to avoid the impression that, since McCain’s illness, he has found a new patron. “I never did anything politically of consequence without John,” Graham acknowledged this  week. “I mean all of the big stuff, campaign finance, climate change, Iraq, you name it. I was by John’s side. I was his wingman.”

Yet, now, he is serving as wingman to a president who takes the opposite view on each of those issues.

“McCain’s years as a prisoner of war gave him a righteousness perhaps nobody can match. He never forgot that political opponents are not his enemies, and that there are things more important than winning elections. But perhaps Graham could show a little backbone? When CNN’s Dana Bash asked him to name new “wingmen or women,” Graham mentioned Sen. Tom Cotton (R-Ark.) — the fierce partisan who blew up Graham’s immigration deal, was patently dishonest about Trump’s “shithole countries” meeting and was dubbed the “Steve King of the Senate” by Graham for his anti-immigrant views, in reference to the ultra-conservative Iowa representative.

“Graham’s rationale for courting Trump? “ To be relevant.” But on the main policy Graham sought to influence — immigration — he got nothing. I asked Graham’s office for presidential actions attributable to Graham’s influence. The response listed items — Supreme Court appointments, the fight against Islamic State and increased defense spending — that were all Trump priorities independent of Graham.”

“I believe there is a little John McCain in all of us,” Graham said in his touching eulogy on the Senate floor. I saw a lot of McCain in the Graham I met on the Straight Talk Express two decades ago. I saw it again earlier this year when Graham lamented Trump’s sudden shift that killed the immigration compromise. “I don’t know where that guy went,” Graham said of the Trump who, briefly, offered to compromise. “I want him back.”

“I don’t know where that Graham went. I want him back.”