FBI Tried To Turn The Russian Oligarch Oleg V. Deripaska Into An Informant But Were Unsuccessful

The New York Times is reporting on a story of how the FBI agent and expert on Russian organized crime Bruce Ohr worked with the ex-MI6 British agent with extensive experience on its Russian desk, Christopher Steele, the author of the infamous Steele dossier, to turn the Russian Oligarch Oleg Deripaska into a FBI informant. Mr. Deripaska has ties to both Russia’s President Vladimir Putin and the republican President Donald Trump’s former campaign manager, Paul Manafort.

These plans which transpired from 2014-2016 did not work out. It’s important to note that the connections between these players date back to a period before anyone ever knew Donald J. Trump would be running a campaign to become the next US president.

“In the estimation of American officials, Oleg V. Deripaska, a Russian oligarch with close ties to the Kremlin, has faced credible accusations of extortion, bribery and even murder.”

“They also thought he might make a good source.”

“Between 2014 and 2016, the F.B.I. and the Justice Department unsuccessfully tried to turn Mr. Deripaska into an informant. They signaled that they might provide help with his trouble in getting visas for the US or even explore other steps to address his legal problems. In exchange, they were hoping for information on Russian organized crime and, later, on possible Russian aid to President Trump’s 2016 campaign, according to current and former officials and associates of Mr. Deripaska.”

“In one dramatic encounter, F.B.I. agents appeared unannounced and uninvited at a home Mr. Deripaska maintains in New York and pressed him on whether Paul Manafort, a former business partner of his who went on to become chairman of Mr. Trump’s campaign, had served as a link between the campaign and the Kremlin.”

“The attempt to flip Mr. Deripaska was part of a broader, clandestine American effort to gauge the possibility of gaining cooperation from roughly a half-dozen of Russia’s richest men, nearly all of whom, like Mr. Deripaska, depend on President Vladimir V. Putin to maintain their wealth, the officials said.”

“Two of the players in the effort were Bruce G. Ohr, the Justice Department official who has recently become a target of attacks by Mr. Trump, and Christopher Steele, the former British spy who compiled a dossier of purported links between the Trump campaign and Russia.”

“The systematic effort to win the cooperation of the oligarchs, which has not previously been revealed, does not appear to have scored any successes. And in Mr. Deripaska’s case, he told the American investigators that he disagreed with their theories about Russian organized crime and Kremlin collusion in the campaign, a person familiar with the exchanges said.”

“But the fallout from the efforts is now rippling through American politics and has helped fuel Mr. Trump’s campaign to discredit the investigation into whether he coordinated with Russia in its interference in the election.”

The contacts between Mr. Ohr and Mr. Steele were detailed in emails and notes from Mr. Ohr that the Justice Department turned over to Republicans in Congress earlier this year. A number of journalists, including some at conservative news outlets, have reported on  elements of those contacts but not on the broader outreach program to the oligarchs or key aspects of the interactions between Mr. Ohr, Mr. Steele and Mr. Deripaska.”

“The revelation that Mr. Ohr engaged with Mr. Steele has provided the president’s allies with fresh fodder to attack the investigation led by Robert S. Mueller III, the special counsel, casting it as part of a vast, long-running conspiracy by a “deep state” bent on undermining Mr. Trump. In their telling, Mr. Ohr and his wife — who worked as a contractor at the same research firm that produced the dossier — are villainous central players out to destroy the president.”

“Mr. Trump himself has seized on the reports, threatening to pull Mr. Ohr’s security clearance and claiming that his family “received big money for helping to create the phony, dirty and discredited Dossier.”

“While Mr. Steele did discuss the research that resulted in the dossier with Mr. Ohr during the final months of the campaign, current and former officials said that Mr. Deripaska was the subject of many of the contacts between the 2 men between 2014 and 2016.” “A timeline that Mr. Ohr hand-wrote of all his contacts with Mr. Steele was among the leaked documents cited by the president and his allies as evidence of an anti-Trump plot.”

“The contacts between Mr. Steele and Mr. Ohr started before Mr. Trump became a presidential candidate and continued through much of the campaign.”

“Mr. Deripaska’s contacts with the F.B.I. took place in September 2015 and the same month a year later. The latter meeting came two months after the F.B.I. began investigating Russian interference in the election and a month after Mr. Manafort left the Trump campaign amid reports about his work for Russia-aligned political parties in Ukraine.”

“The outreach to Mr. Deripaska, who is so close to the Russian president that he has been called “Putin’s oligarch,” was not as much of a long shot as it might have appeared.”

“He had worked with the United States government in the past, including on a thwarted effort to rescue an F.B.I. agent captured in Iran, on which he reportedly spent as much as $25 million of his own money. And he had incentive to cooperate again in the run-up to the 2016 election, as he tried to win permission to travel more easily to the United States, where he has long sought more freedom to do business and greater acceptance as a global power broker.”

“Mr. Steele sought to aid the effort to engage Mr. Deripaska, and he noted in an email to Mr. Ohr in February 2016 that the Russian had received a visa to travel to the United States. In the email, Mr. Steele said his company had compiled and circulated “sensitive” research suggesting that Mr. Deripaska and other oligarchs were under pressure from the Kremlin to toe the Russian government line, leading Mr. Steele to conclude that Mr. Deripaska was not the “tool” of Mr. Putin alleged by the US government.” 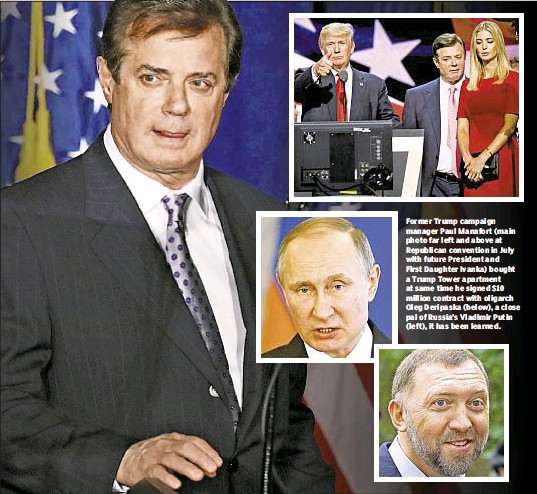 “The timeline sketched out by Mr. Ohr shows contacts stretching back to when Mr. Ohr first met Mr. Steele in 2007. It also shows what officials said was the first date on which the two discussed cultivating Mr. Deripaska: a meeting in Washington on Nov. 21, 2014, roughly seven months before Mr. Trump announced that he was running for president.”

“The officials spoke on the condition of anonymity to discuss an initiative that remains classified. Most expressed deep discomfort, saying they feared that in revealing the attempts to cultivate Mr. Deripaska and other oligarchs they were undermining American national security and strengthening the grip that Mr. Putin holds over those who surround him.”

“But they also said they did not want Mr. Trump and his allies to use the program’s secrecy as a screen with which they could cherry-pick facts and present them, sheared of context, to undermine the special counsel’s investigation. That, too, they said they feared, would damage American security.”

“The program was led by the F.B.I. Mr. Ohr, who had long worked on combating Russian organized crime, was one of the Justice Department officials involved.”

“Mr. Steele served as an intermediary between the Americans and the Russian oligarchs they were seeking to cultivate. He had first met Mr. Ohr years earlier while still serving at MI6, Britain’s foreign spy agency, where he oversaw Russia operations. After retiring, he opened a business intelligence firm, and had tracked Russian organized crime and business interests for private clients, including one of Mr. Deripaska’s lawyers.”