Why Is GOP Holding Back Documents About SCOTUS Pick Brett Kavanaugh?/ Where Is the Fight By Democrats?

Update on 9/4/18: This is all I need to know for me to say absolutely that Judge Kavanaugh is not the person that I want anywhere near the US Supreme Court.

As per the 9/4/18 Newsweek report, “The father (Fred Guttenberg) of a student (Jamie Guttenberg) who died in the Park-land, Florida, school shooting in February said Judge Brett Kavanaugh ignored his attempted handshake Tuesday during the Supreme Court nominee’s confirmation hearings. “(He said), he walked up to Kavanaugh after the morning portion of the hearing ended, introduced himself and stuck out his hand for a handshake. Guttenberg said the judge walked away from him without returning the greeting. ”

Denials by those backing Brett Kavanaugh do not hold water. Senator Dianne Feinstein introduced the two of them, there was no security personnel around them and Mr. Kavanaugh chose not to shake hands as he walked away.

Later, the security team for Mr. Kavanaugh confronted Mr. Guttenberg about his approaching the SCOTUS pick. There was no apology, no excuse about confusion. This Mr. Kavanaugh is one cold dude.

What is it that the White House doesn’t want the US senators on its Judiciary Committee to know about the republican US Supreme Court nominee Brett Kavanaugh to where its lawyers would exert “executive privilege” to keep over 100.000 pages of the judge’s records pertaining to the time period of when he worked for President George W. Bush, from being reviewed?

Democrats are suspicious that Judge Brett Kavanaugh was involved in the Bush administration on issues pertaining to the use of torture.

On September 4, 2018, news reports are disclosing that the GOP officials dumped at one time 42,000 documents over the Labor Day weekend when they knew the US Senate Judiciary members would not have time to review them before the initial hearing on the president’s pick for the US Supreme Court, Judge Brett Kavanaugh begins on the 4th of September.

As per the 9/3/18 Washington Post report, “Hours before the start of hearings on Brett Kavanaugh’s nomination to the Supreme Court, the lawyer for former President George W. Bush turned over 42,000 pages of documents from the nominee’s service in the Bush White House, angering Senate Minority Leader Chuck Schumer, who issued what is certain to be a futile call to delay the proceedings.”

“Not a single senator will be able to review these records before tomorrow,” Schumer, D-N.Y., tweeted Monday evening.”

There are those of us who are sick and tired of watching the Democrats bring a butter knife to a fight. The republicans are not playing by ‘Marquess of Queensberry Rules.’

Frankly, I want the Democratic senators to be involved in a serious fight to delay this nomination. Words aren’t enough.

I was watching the MSNBC TV ‘Morning Joe’ session where the host Joe Scarborough and others were asking why are the democratic senators on the judiciary committee are even showing up for this hearing when they have not been granted access to essential material in a timely manner, and why aren’t they just dumping the 42,000 pieces of data on the internet where there are plenty of attorneys who would pour over them with a fine tooth comb.

As per a 7/18/18 Washington Post report by Michael Kranish, “Brett Kavanaugh was adamant as he sat in the witness chair at his 2006 confirmation hearing to be an appeals court judge. Kavanaugh was being questioned by Democrats about his knowledge of President George W. Bush‘s torture policy and treatment of detainees while he served as associate White House counsel.”

He responded that he was “not involved” in “questions about the rules governing detention of combatants.”

“Sen. Dick Durbin, D-Ill., whose questions in 2006 elicited Kavanaugh’s denial, said in an interview this week that “what he told us under oath is not accurate.”

“Kavanaugh was involved in at least one contentious meeting at the White House Counsel’s Office in 2002, and two former White House officials detailed his role in interviews this week with The Washington Post. Bush was then developing his policy on detention and interrogation of terrorism suspects, and Kavanaugh was asked to interpret an important question about how the detainee policy was likely to be viewed in a Supreme Court challenge, specifically by Justice Anthony Kennedy, for whom he had served as a clerk.”

“Kavanaugh weighed in on how he thought Kennedy would vote on whether certain detainees should be denied a chance to be heard and have legal counsel, according to the other participants.”

“Kavanaugh had already been confirmed for the circuit court when the White House meeting became public in a Post report. Democrats including Durbin have sought ever since to question Kavanaugh about whether he misled the Senate Judiciary Committee.”

“The Trump White House, citing executive privilege, is withholding from the Senate more than 100,000 pages of records from Judge Brett M. Kavanaugh’s time as a lawyer in the administration of former President George W. Bush.”

“The decision, disclosed in a letter that a lawyer for Mr. Bush sent on Friday to Senator Charles E. Grassley of Iowa, the chairman of the Senate Judiciary Committee, comes just days before the start of Judge Kavanaugh’s Supreme Court confirmation hearings on Tuesday. It drew condemnation from Senator Chuck Schumer of New York, the Democratic leader.”

“We’re witnessing a Friday night document massacre,” Mr. Schumer wrote on Twitter on Saturday. “President Trump’s decision to step in at the last moment and hide 100k pages of Judge Kavanaugh’s records from the American public is not only unprecedented in the history of SCOTUS noms, it has all the makings of a cover up.”

“Democrats and Republicans have been arguing for weeks over access to documents relating to Judge Kavanaugh’s time working for Mr. Bush. Democrats say that Republicans are blocking access to the documents as part of an effort to ram through the nomination without proper scrutiny.”

“The bulk of the records being withheld “reflect deliberations and candid advice concerning the selection and nomination of judicial candidates, the confidentiality of which is critical to any president’s ability to carry out this core constitutional executive function,” wrote Mr. Bush’s lawyer, William A. Burck.”

“They also reflect “advice submitted directly to President Bush,” Mr. Burck wrote, as well as communications between White House staff members about their discussions with Mr. Bush, and other internal deliberations.”

“Judge Kavanaugh spent 2 years, from 2001 to 2003, in the White House Counsel’s Office, and later served as staff secretary to the president, a role that required him to vet documents before they reached the president’s desk. None of the staff secretary records have been released, because Mr. Grassley did not request them — another point of contention between Republicans and Democrats.”

“Mr. Burck has been heading a team of dozens of lawyers who are reviewing tens of thousands of pages of the Bush White House records, which are held by the National Archives and subject to release under the Presidential Records Act. But the White House, after consulting with the Justice Department, decided that certain records should not be released.” 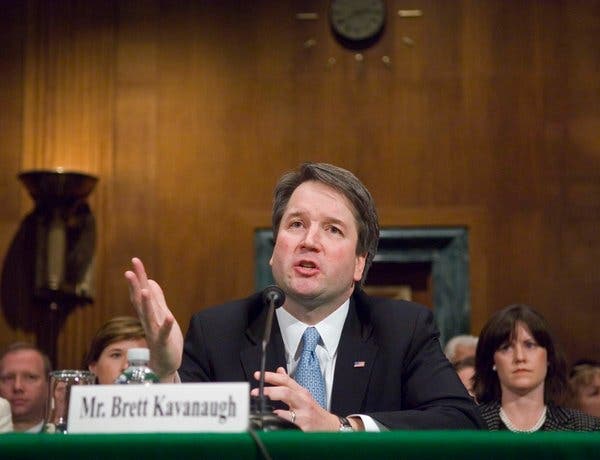 “Senate Democrats said this was the first time that a sitting president has asserted executive privilege under the Public Records Act in order to prevent documents from going to Congress during a Supreme Court confirmation process. Mr. Schumer issued his angry tweets alleging a holiday weekend cover-up just minutes before the start of the funeral for his Senate colleague John McCain, which Mr. Schumer attended.”

“So far, Mr. Burck said, he has produced more than 415,000 pages of records to the committee, adding, “We believe we have faithfully followed President Bush’s instruction to review these documents accurately, neutrally, expeditiously and, with a presumption of disclosure.”