For the past week of September 4, 2018, I have been portraying the US Supreme Court nominee Judge Brett Kavanaugh as unfit to serve on the highest court in the USA because of his history as a political operative, opportunist and his habit of dissembling.

At the level he’s played this game of politics, there is no way he can be considered to be a fair arbiter of the law.

I would much rather have seen Robert Bork as a justice on the US Supreme Court as he was honest and a true legal scholar. Judge Kavanaugh cannot compete at either level.

David Brock who wrote the below NBC News op-ed piece is the former right-wing scandal reporter of  The American Spectator. Later he left this movement but he chronicled his rise to the pinnacle of the conservative movement and his painful break with it in his book, Blinded By the Right. He knew Brett Kavanaugh well to where he argues strongly against confirming him to be the next US Supreme Court justice.

David Brock had pilloried Anita Hill who had testified against the confirmation of the US Supreme Court Justice, Clarence Thomas in a bestseller. His past reporting in The American Spectator as part of the infamous “Arkansas Project” triggered the course of events that led to the historic impeachment trial of President Clinton.

As per a review of his book, “David Brock was at the center of the right-wing dirty tricks operation of the Gingrich era–and a true believer–until he could no longer deny that the political force he was advancing was built on little more than lies, hate, and hypocrisy. In Blinded By the Right, Brock, who came out of the closet at the height of his conservative renown, tells his riveting story from the beginning, giving us the first insider’s view of what Hillary Rodham Clinton called “the vast right-wing conspiracy.” Whether dealing with the right-wing press, the richly endowed think tanks, Republican political operatives, or the Paula Jones case, Brock names names from Clarence Thomas on down, uncovers hidden links, and demonstrates how the Republican Right’s zeal for power created the poisonous political climate that culminated in George W. Bush’s election.” 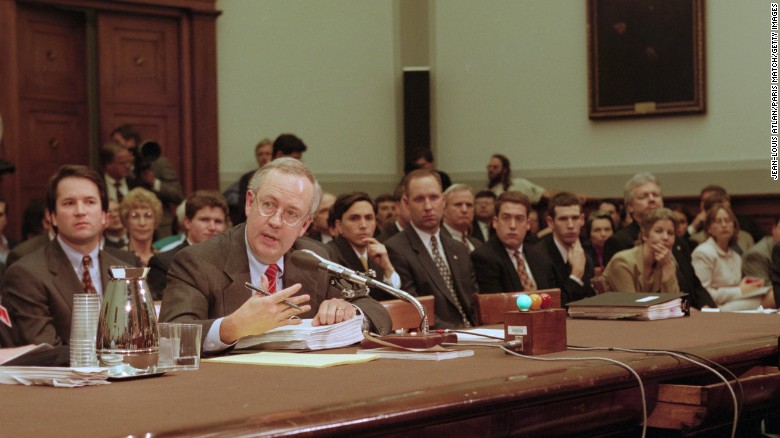 On September 7, 2018, David Brock, former hard-line right winger, for NBC news penned the following op-ed piece, “David Brock I knew Brett Kavanaugh during his years as a Republican operative. Don’t let him sit on the Supreme Court.” (“We were part of a close circle of cynical hard-right operatives being groomed for much bigger things.”)

“I used to know Brett Kavanaugh pretty well. And, when I think of Brett now, in the midst of his hearings for a lifetime appointment to the U.S. Supreme Court, all I can think of is the old “Aesop’s Fables” adage: “A man is known by the company he keeps.”

“And that’s why I want to tell any senator who cares about our democracy: Vote no.”

“Twenty years ago, when I was a conservative movement stalwart, I got to know Brett Kavanaugh both professionally and personally.”

“Brett actually makes a cameo appearance in my memoir of my time in the GOP, “Blinded By The Right.” I describe him at a party full of zealous young conservatives gathered to watch President Bill Clinton’s 1998 State of the Union address — just weeks after the story of his affair with a White House intern had broken. When the TV camera panned to Hillary Clinton, I saw Brett — at the time a key lieutenant of Ken Starr, the independent counsel investigating various Clinton scandals — mouth the word “bitch.”

“But there’s a lot more to know about Kavanaugh than just his Pavlovian response to Hillary’s image. Brett and I were part of a close circle of cold, cynical and ambitious hard-right operatives being groomed by GOP elders for much bigger roles in politics, government and media. And it’s those controversial associations that should give members of the Senate and the American public serious pause.” “At one time or another, each of them partied at my Georgetown townhouse amid much booze and a thick air of cigar smoke.”

“In a rough division of labor, Kavanaugh played the role of lawyer — one of the sharp young minds recruited by the Federalist Society to infiltrate the federal judiciary with true believers. Through that network, Kavanaugh was mentored by D.C. Appeals Court Judge Laurence Silberman, known among his colleagues for planting leaks in the press for partisan advantage.”

“When, as I came to know, Kavanaugh took on the role of designated leaker to the press of sensitive information from Starr’s operation, we all laughed that Larry had taught him well. (Of course, that sort of political opportunism by a prosecutor is at best unethical, if not illegal.)” 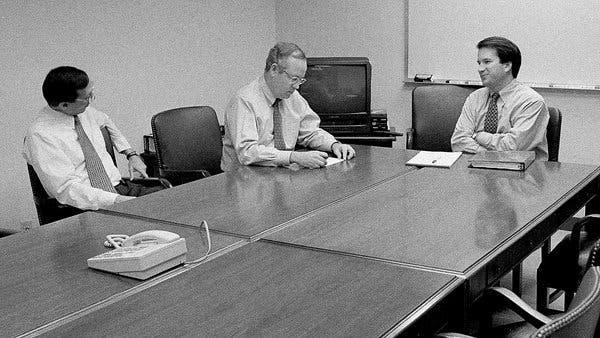 Another compatriot was George Conway (now Kellyanne’s husband), who led a secretive group of right-wing lawyers — we called them “the elves” — who worked behind the scenes directing the litigation team of Paula Jones, who had sued Clinton for sexual harassment. I knew then that information was flowing quietly from the Jones team via Conway to Starr’s office — and also that Conway’s go-to man was none other than Brett Kavanaugh.

That critical flow of inside information allowed Starr, in effect, to set a perjury trap for Clinton, laying the foundation for a crazed national political crisis and an unjust impeachment over a consensual affair.

But the cabal’s godfather was Ted Olson, the then-future solicitor general for George W. Bush and now a sainted figure of the GOP establishment (and of some liberals for his role in legalizing same-sex marriage). Olson had a largely hidden role as a consigliere to the “Arkansas Project” — a multi-million dollar dirt-digging operation on the Clintons, funded by the eccentric right-wing billionaire Richard Mellon Scaife and run through The American Spectator magazine, where I worked.” 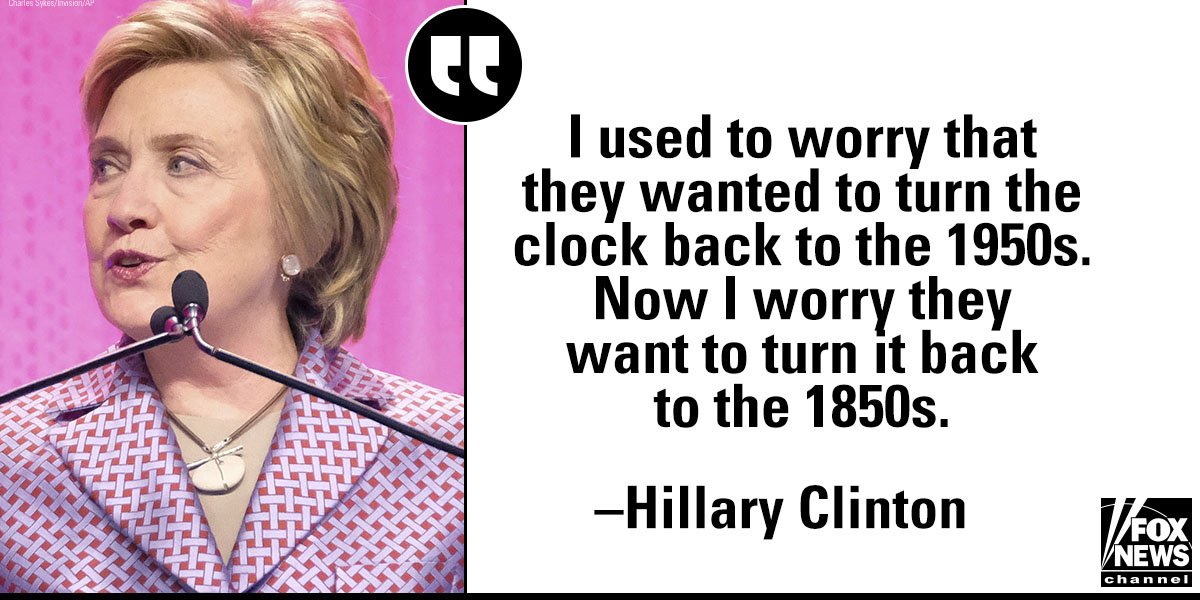 “Both Ted and Brett had what one could only be called an unhealthy obsession with the Clintons — especially Hillary. While Ted was pushing through the Arkansas Project conspiracy theories claiming that Clinton White House lawyer and Hillary friend Vincent Foster was murdered (he committed suicide), Brett was costing taxpayers millions by pedaling the same garbage at Starr’s office.”

“A detailed analysis of Kavanaugh’s own notes from the Starr Investigation reveals he was cherry-picking random bits of information from the Starr investigation — as well as the multiple previous investigations — attempting vainly to legitimize wild right-wing conspiracies. For years he chased down each one of them without regard to the emotional cost to Foster’s family and friends, or even common decency.”

“Kavanaugh was not a dispassionate finder of fact but rather an engineer of a political smear campaign. And after decades of that, he expects people to believe he’s changed his stripes.” 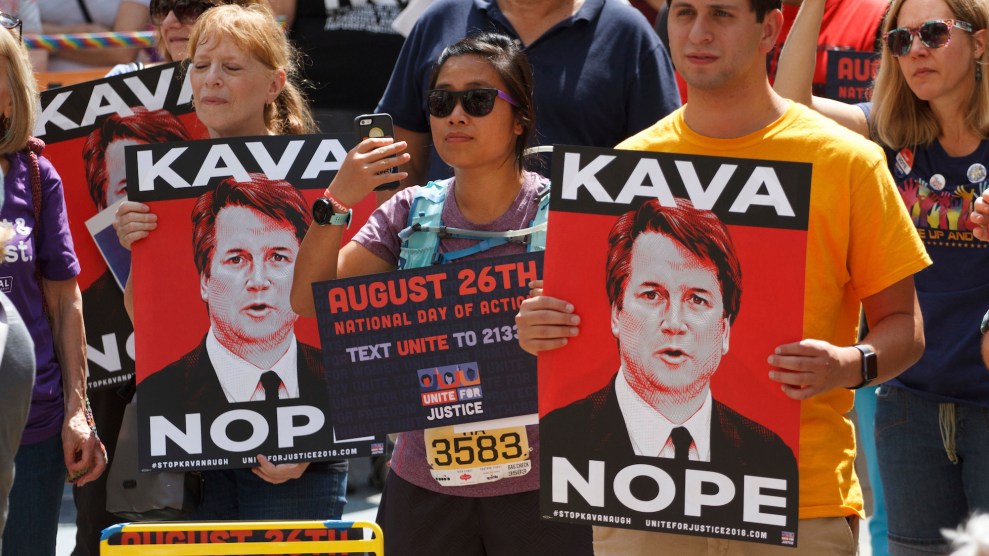 “Like millions of Americans this week, I tuned into Kavanaugh’s hearings before the Senate Judiciary Committee with great interest. In his opening statement and subsequent testimony, Kavanaugh presented himself as a “neutral and impartial arbiter” of the law. Judges, he said, were not players but akin to umpires — objectively calling balls and strikes. Again and again, he stressed his “independence” from partisan political influences.”

“But I don’t need to see any documents to tell you who Kavanaugh is — because I’ve known him for years. And I’ll leave it to all the lawyers to parse Kavanaugh’s views on everything from privacy rights to gun rights.”

“But I can promise you that any pretense of simply being a fair arbiter of the constitutionality of any policy regardless of politics is simply a pretense. He made up his mind nearly a generation ago — and, if he’s confirmed, he’ll have nearly two generations to impose it upon the rest of us.”