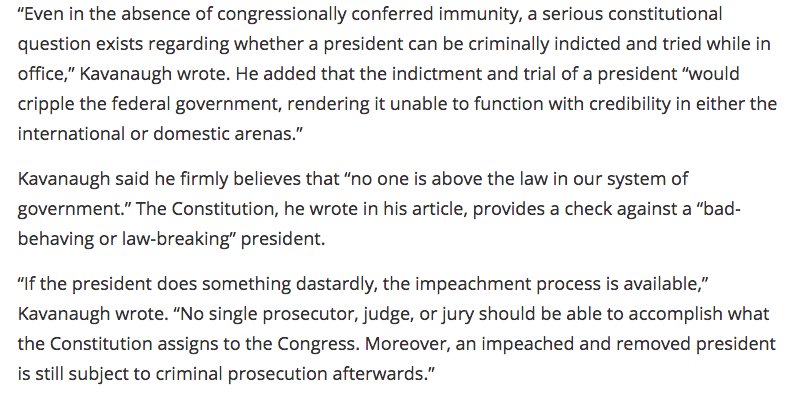 It’s important to note that Judge Brett Kavanaugh was not on the original list of justices to be considered for the Supreme Court compiled by the Federalist Society but he was added later by the republican President Donald Trump.

As a matter of fact, the Senate Majority Leader Mitch McConnell had warned against his nomination because he would be tough to confirm due to his long written record, ripe for critics to pick over. This is an important point because republicans are arguing that they have turned over more documents than ever before in prior confirmation hearings but that is only because he was prolific in his writings. It is still true that democrats are not being presented with his true record or only a small percentage of his work product.

In addition, in another unprecedented move, it is the attorney Bill Burke for his friend Brett Kavanaugh who is doing the vetting before any material is shared  with the US Senate Judiciary Committee members. He does not represent the National Archives’ personnel who typically do the vetting of documents to be reviewed by the US Senate Judiciary Committee. Mr. Burke is representing the best interests of his clients and not the US citizens who have a right to have access to this data.

There’s a reason that republicans have only shared about 10% of Judge Brett Kavanaugh’s documents to be reviewed by the members of the US Senate Judiciary Committee regarding the confirmation hearings for him to become the next US Supreme Court Justice; why a significant percentage of the material has been marked “committee confidential,” an unprecedented tactic which was meant to bar the democrats from sharing them with the public; and why the president is arguing the unprecedented usage of executive privilege for keeping back 102,000 pieces of data created by Judge Kavanaugh when he worked as White House counsel under the administration of the republican President George W. Bush.

After it became obvious that many of the pieces of data had no content which warranted this designation of “committee confidential,” the democratic Senator Cory Booker started sharing some and then others did likewise. At this point, the republican chair Senator Chuck Grassley has approved these same documents to be shared with the public.

Any reasonable observer has to ask why are the republicans acting like there’s something to hide?

Here are the stories on a couple of instances related to Mr. Kavanaugh’s time in the White House while President Bush was in charge… 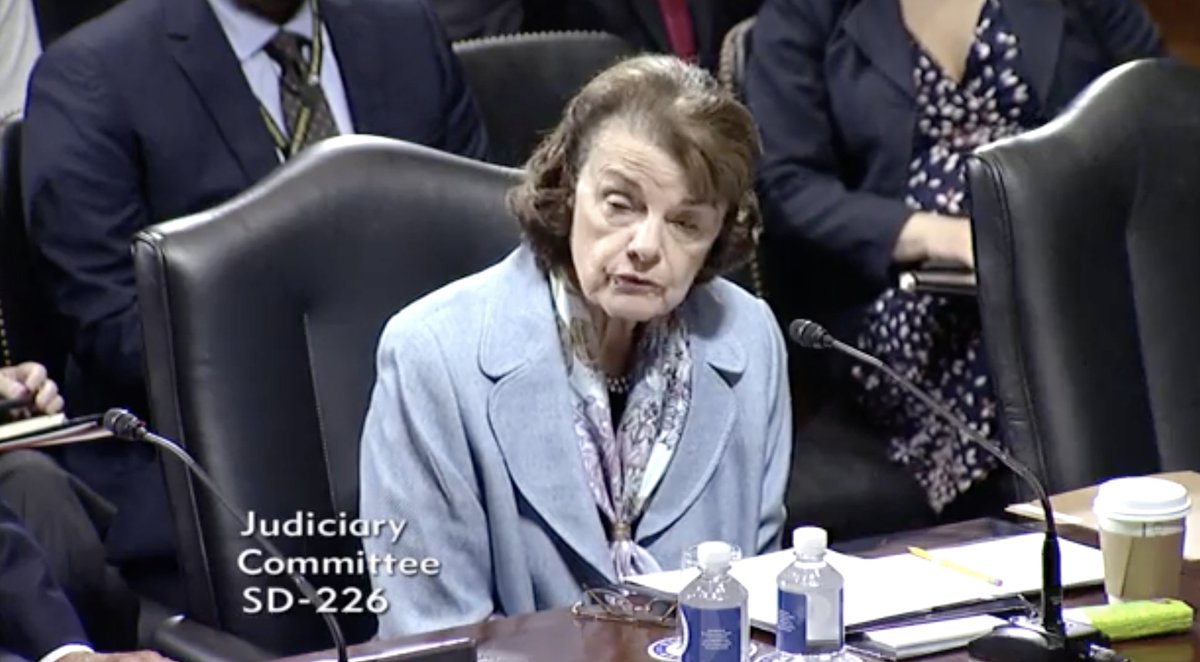 On July 17, 2018, David A. Graham of the Atlantic penned the following analysis, “How Kavanaugh’s Last Confirmation Hearing Could Haunt Him” (“Two Democrats feel that the Supreme Court nominee misled them about his awareness of terror-detainee policy during the Bush administration.”)

“The last time Brett Kavanaugh appeared before the Senate Judiciary Committee, in May 2006, the country was slowly learning about some of the extraordinary steps the George W. Bush administration had taken as part of its anti-terrorism efforts—from warrantless wiretapping to torture of detainees.””Kavanaugh had spent five years in the White House, and was nominated for a lifetime appointment on the D.C. Circuit Court of Appeals. Democratic senators wanted to know what he knew about those controversial programs. The answers that Kavanaugh gave could complicate Senate approval of his nomination to the Supreme Court.”
“The Judiciary Committee will review an enormous set of documents from the Bush White House that could settle accusations from Democratic senators that Kavanaugh misled them about his role in detainee policy during his prior appearance. The issue offers another example of how the abuses and overreaches of the Bush era continue to haunt those involved.” 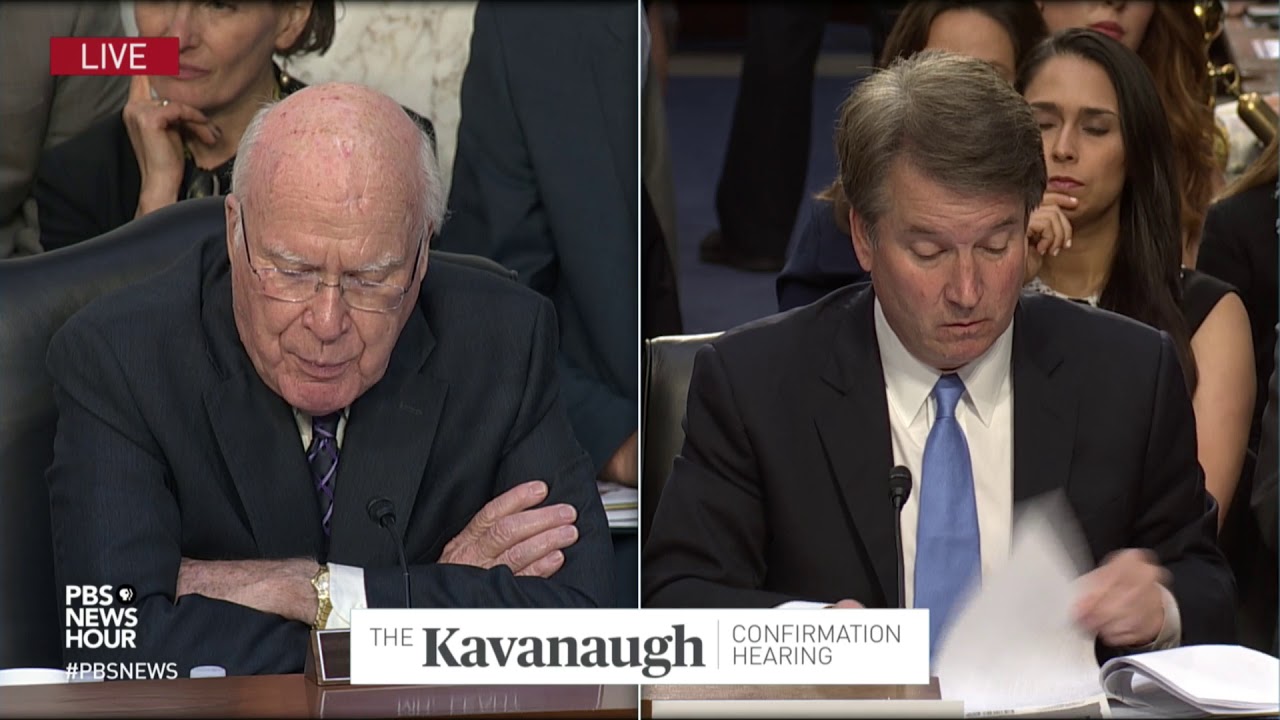 “Following the September 11 attacks, government officials wrote and approved memos justifying interrogation techniques for terror suspects that ran afoul of U.S. and international laws against torture. The Bush administration also secretly authorized warrantless surveillance of U.S. citizens under the top-secret Terrorist Surveillance Program. Bush attorneys argued that both approaches were legal under the president’s “inherent” authority as commander in chief, and the limits of executive authority are among the most important legal issues the high court deals with. Legal scholars have already focused on Kavanaugh’s vision of executive poweras unusually expansive.”
“After working on Bush’s legal team during the 2000 election, Kavanaugh joined the White House, where he worked first in the White House counsel’s office and then as the staff secretary, a crucial gatekeeper role. In 2003, Bush nominated him to the powerful D.C. Circuit court, but his nomination stalled. Three years later, Kavanaugh got another chance. During his confirmation hearings, Democratic Senators Patrick Leahy and Richard Durbin quizzed Kavanaugh on what he knew about administration decisions regarding the war on terror, and especially on the treatment of detainees.” 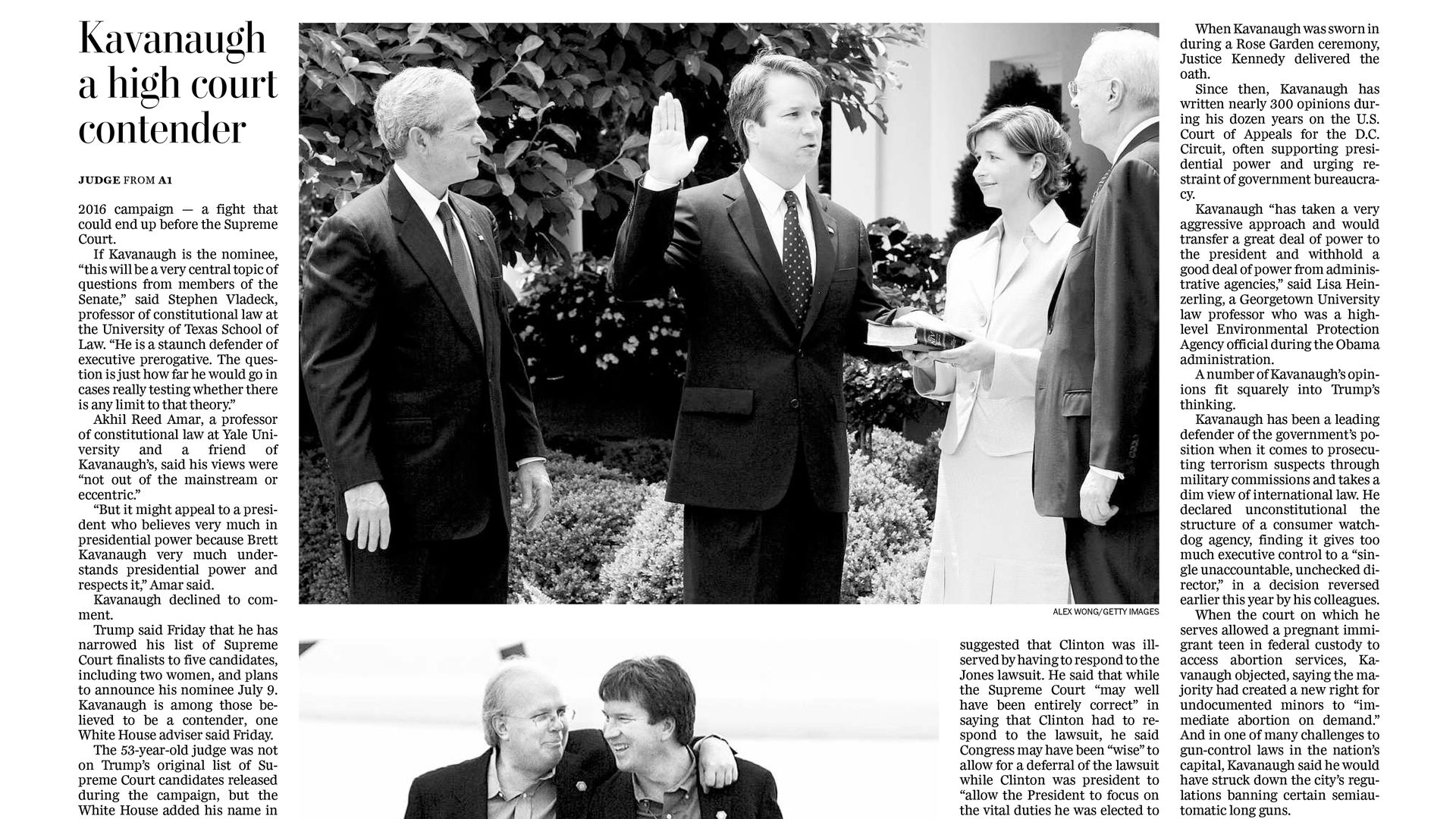 “During the 2006 hearing, Durbin asked Kavanaugh about the judicial nomination of William Haynes, who had also been involved in detainee decisions as the general counsel at the Pentagon. (Haynes was never confirmed.) “At the time of the nomination, what did you know about Mr. Haynes’s role in crafting the administration’s detention and interrogation policies?” Durbin asked.”
“Senator, I did not, I was not involved and am not involved in the questions about the rules governing detention of combatants or—and so I do not have the involvement with that,” Kavanaugh replied.””Leahy asked Kavanaugh about the warrantless wiretapping program, which Kavanaugh repeatedly said he’d learned of from news reports.”

“Leahy: What about the documents relating to the administration’s policies and practice on torture; did you see anything about that, or did you first hear about that when you read about it in the paper?”

“Kavanaugh: I think with respect to the legal justifications or the policies relating to the treatment of detainees, I was not aware of any issues on that or the legal memos that subsequently came out until the summer, sometime in 2004 when there started to be news reports on that. This was not part of my docket, either in the Counsel’s Office or as Staff Secretary.”

“Kavanaugh was confirmed later that May. But the following summer, news reports cast some doubt on his answers during the hearing. In a Pulitzer Prize–winning story on June 25, 2007, then–Washington Post reporters Barton Gellman and Jo Becker said Kavanaugh had argued to other Bush officials that Justice Anthony Kennedy, for whom he had clerked, would likely not accept the idea of indefinite detention of U.S. citizens without lawyers.”

“The following day, NPR added more detail: “In fact, in 2002, Kavanaugh and a group of top White House lawyers discussed whether the Supreme Court would uphold the Bush administration’s decision to deny lawyers to American enemy combatants. Kavanaugh advised the group that the Supreme Court’s swing voter, Justice Anthony Kennedy, would probably reject the president’s assertion that the men were not entitled to counsel.”

“Durbin told NPR he felt “perilously close to being lied to” by the nominee, adding, “I will just say that he might have decided that he could split the difference here and give me an answer in the negative. But he had to know he was misleading me and the committee and the people who were following this controversial nomination.” He also sent a letter to Kavanaugh asking about the apparent discrepancy:”

“I request that you provide the Senate Judiciary Committee with an explanation for this apparent contradiction. In addition, I request that you disqualify yourself in all pending and subsequent cases involving detainees and enemy combatants. Your lack of candor at your nomination hearing suggests you cannot approach these cases with impartiality and an open mind.” 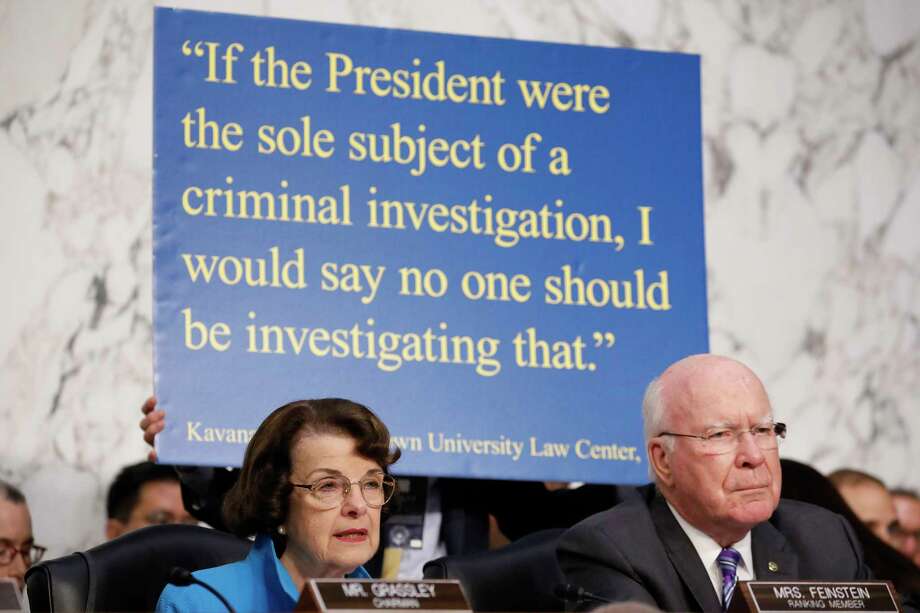 “Leahy, meanwhile, sent a letter to Attorney General Alberto Gonzales asking him to investigate whether Kavanaugh had lied. “False testimony by any witness is troubling and undermines the Senate’s ability to fulfill its constitutional duties on behalf of the American people,” Leahy wrote. “But my concern is heightened because the subject matter of the possibly false testimony was highly controversial and played a critical role in many Senators’ consideration of Mr. Kavanaugh’s appointment to one of the courts most involved in reviewing those very same detention policies.”

“In March 2008, the Justice Department wrote back to Leahy, saying the public-integrity section had “reviewed this matter and determined there was not sufficient basis to initiate a criminal investigation.” (In a strange coincidence, the person who signed the letter was  Brian Benczkowski, who was last week confirmed to lead the DOJ’s criminal division despite controversy over his representation of a Russian bank.) Kavanaugh continued to sit on judicial panels that considered detainee-related questions.”

“And nothing else happened.”

See: The Democratic Coalition Will File a Criminal Complaint Against Kavanaugh ./DailyKos..