The republican US senators have done everything possible to keep any possible compromising/ questionable material created by the current prolific Supreme Court nominee Judge Brett from seeing the light of day.

See: The Democratic Coalition Will File a Criminal Complaint Against Kavanaugh ./DailyKos..

It is the private attorney Bill Burke acting on behalf of his client and friend, Judge Brett Kavanaugh who has been doing the vetting of all the material that has been finally shared  with the US Senate Judiciary Committee members. But he’s a poor substitute for the National Archives’ personnel who typically do the vetting of documents to be reviewed by the US Senate Judiciary Committee. While Mr. Burke may be representing the best interests of his client, he is depriving the US citizens who have a right to access this data.

One can logically ask with skepticism, why the republicans have only shared about 10% of Judge Kavanaugh’s documents with the members of the US Senate Judiciary Committee regarding his confirmation hearings to become the next US Supreme Court Justice; why a significant percentage of the material has been marked “committee confidential,” an unprecedented tactic, designed to bar the democrats from sharing them with the public; and why the president is arguing the unprecedented usage of executive privilege for keeping back 102,000 pieces of data created by Judge Kavanaugh when he worked as White House counsel under the administration of the republican President George W. Bush; and why the republicans are rushing this process at lightning speed? 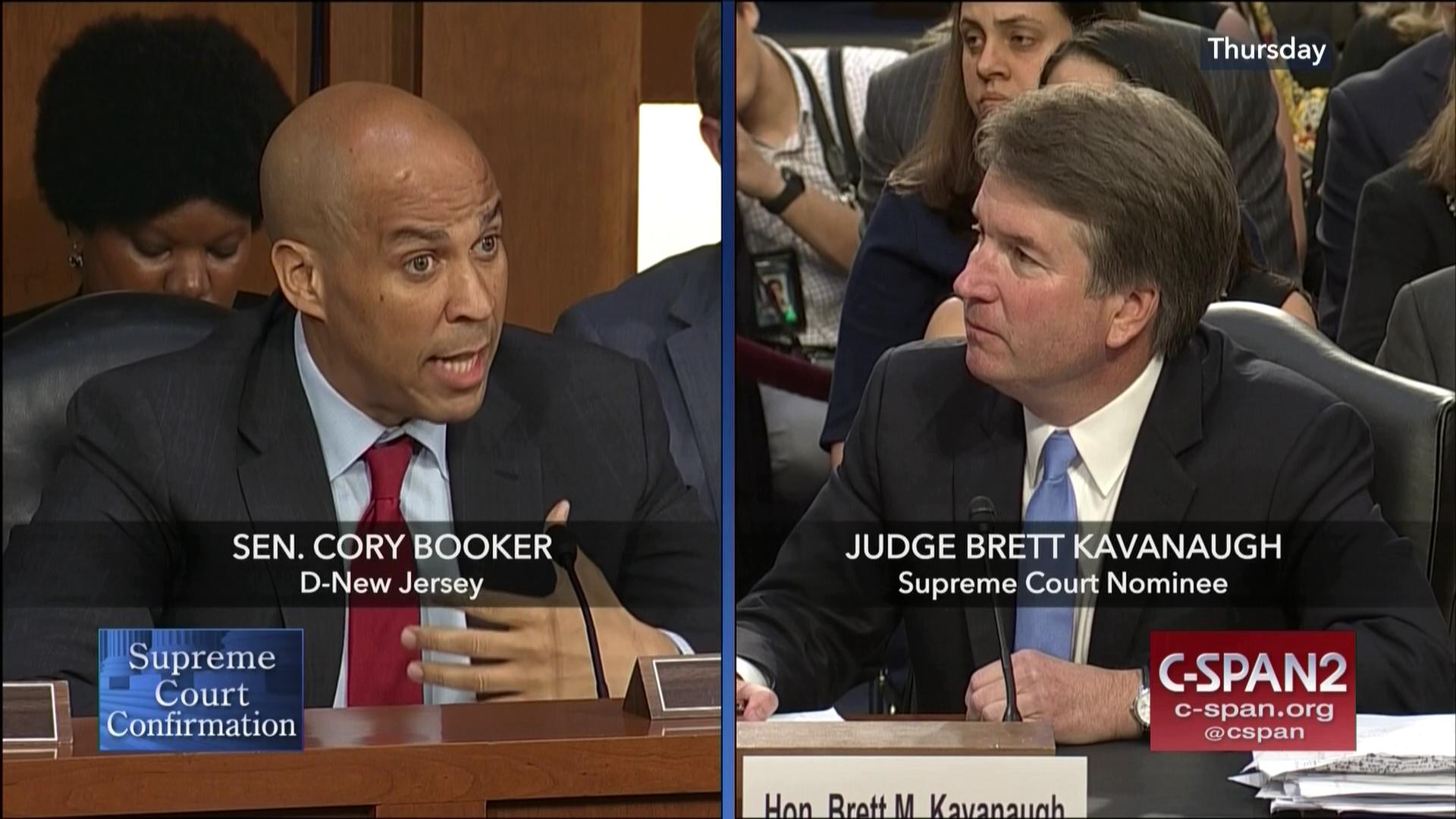 As per the 9/7/18 Washington Post article by John Wagner, “Senate Majority Leader Mitch McConnell (R-Ky.) said in an interview that aired Friday that Sen. Cory Booker (D-N.J.) could face scrutiny from the Senate Ethics Committee for violating a rule that prohibits the release of confidential material.”

“During Thursday’s hearing on the nomination of Judge Brett M. Kavanaugh to the Supreme Court, Booker said he was knowingly violating a Senate rule by releasing an email revealing the nominee’s views on racial profiling. After another senator on the Judiciary Committee said that could result in expulsion, Booker dared his colleagues to take that action.”

“It turns out that document had already been cleared for public release. But later Thursday afternoon, Booker, who is weighing a 2020 presidential bid, released what he said were 28 documents marked “committee confidential” in a defiant bid to make the confirmation process more transparent.”

“During a radio interview, McConnell characterized Booker’s actions as “unusual behavior” and said it “wouldn’t surprise me” if it draws the attention of the Ethics Committee.”

“When you break the Senate rules, it’s something the Ethics Committee could take a look at,” McConnell told host Hugh Hewitt.”

“Supreme Court nominee Brett Kavanaugh has made declarations under oath during his current and past confirmation hearings that are contradicted by documents from his time as a counsel to the president and staff secretary in the George W. Bush White House. Newly released documents have undermined Kavanaugh’s declarations to the Senate Judiciary Committee, contradictions that are drawing close scrutiny from many Democrats. Kavanaugh has denied making any misleading or false statements.”

His role in accessing stolen documents: “In 2002, a GOP aide on the Senate Judiciary Committee, Manuel Miranda, stole thousands of documents belonging to the committee’s Democratic staff. At the time, Kavanaugh was a White House lawyer working on judicial nominations, which included working alongside Miranda. In 2003, President Bush nominated Kavanaugh to his current position on the DC Circuit Court of Appeals and his confirmation hearing was held in 2004—though he was not confirmed until two years later. During his 2004 hearing, Kavanaugh denied ever receiving any of the documents Miranda stole. Asked if he “ever come across memos from internal files of any Democratic members given to you or provided to you in any way?” he replied, “No.” In 2006, also under oath, he again denied ever receiving stolen documents.”

“But newly released documents show that Miranda had indeed sent Kavanaugh information from the stolen internal documents. The nominee continues to deny he knew the information was stolen. But he can no longer deny he received it.” 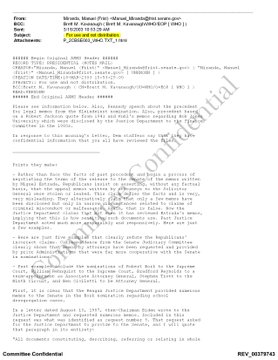 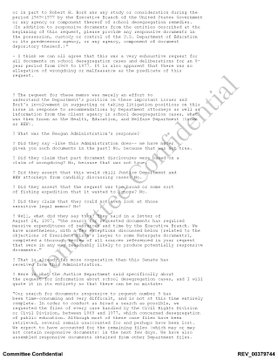 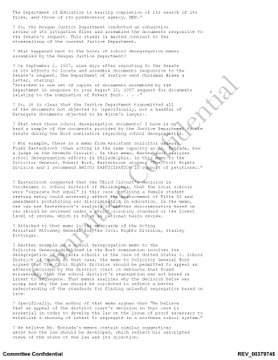 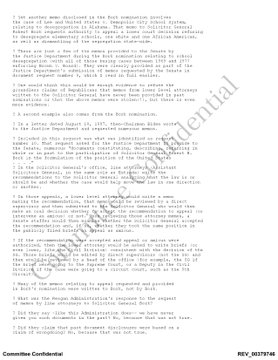 BREAKING: Kavanaugh testified he never received any docs that even “appeared to … have been drafted or prepared by Democratic staff.” Well, he got 8 pages of material taken VERBATIM from my files, obviously written by Dem staff, LABELED “not [for] distribution”.

Warrantless wiretapping: At a 2006 confirmation hearing, Kavanaugh told Sen. Patrick Leahy (D-Vt.) that he knew nothing of the NSA’s warrantless wiretapping program, launched under President George W. Bush, until the New York Timesrevealed it publicly in 2005. Kavanaugh insisted he’d heard “nothing at all” about the program before that, even though he was a senior administration aide. But a September 17, 2001 email provided to the New York Times this week shows that Kavanaugh was involved in at least initial discussions about the widespread surveillance of phones that characterized the NSA program. In the email to John Yoo, then a Justice Department lawyer, Kavanaugh asked about the Fourth Amendment implications of “random/constant surveillance of phone and e-mail conversations of non-citizens who are in the United States when the purpose of the surveillance is to prevent terrorist/criminal violence?” Kavanaugh said Wednesday that his 2006 testimony was “100 percent accurate.” But the email, which describes the gist of the wiretapping program, which Bush approved in 2002, calls Kavanaugh’s claims of ignorance into question.

Torture: During the same 2006 confirmation hearing, Kavanaugh told Sen. Dick Durbin (D-Ill.) that he “was not involved” in legal questions related to the detention of so-called enemy combatants. But Durbin said Thursday that records show that there are at least three recorded examples of Kavanaugh participating in discussions of Bush administration detainee policy. Kavanaugh stood by his prior answer.

Now he acknowledges he was involved with the rules for access to counsel for detainees and the detention of U.S. citizen enemy combatants, as well as the signing statement for the McCain Torture Amendment. But he still claims his 2006 testimony was accurate.

Judge Kavanaugh says he is a textualist. But he is twisting the plain meaning of the word “detention” to serve his own interests. It’s simply not credible. pic.twitter.com/fMwkej4Hva 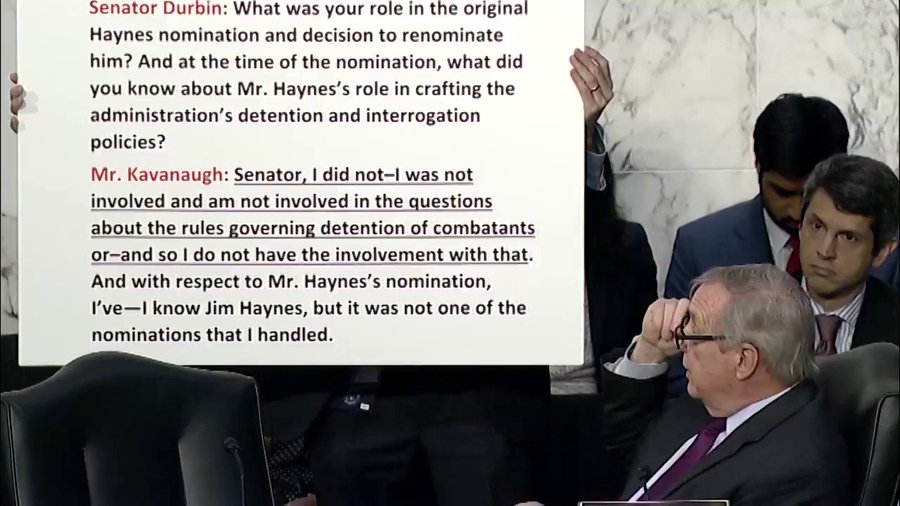 Twitter Ads info
The nomination of Judge William Pryor: In Kavanaugh’s 2004 confirmation hearing, Sen. Ted Kennedy (D-Mass.) asked the nominee about his support for William Pryor’s nomination to the 11th Circuit, given that Pryor had called Roe v. Wade “the worst abomination of constitutional law in our history.” Kavanaugh responded, “That was not one that I worked on personally.” Newly released documents suggest otherwise. Emails from the Bush White House show that Kavanaugh was involved in selecting Pryor, interviewing him, and shepherding his nomination through the Senate. 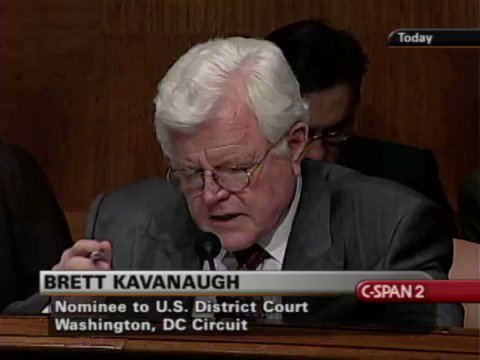 In 2004, Judge #Kavanaugh distanced himself from the controversial Judge Pryor nomination. He testified—repeatedly—that he “was not involved in handling his nomination.” Thanks to documents released at 3AM this morning, we now know that’s not true.

Link to entire report: 5 Times Brett Kavanaugh Appears to Have Lied to Congress