No sooner did Dr. Christine Blasey Ford come forward on the 17th of September 2018 with her attempted rape assertions against the current republican Supreme Court nominee Judge Brett Kavanaugh, within the hour, the right wing / Russian bot crowd started its ‘fake news’ campaign against her.

Be prepared to have already been a victim of seeing/ reading these lies.

“Just minutes after Christine Blasey Ford, a California-based psychologist, went public with accusations of teenage sexual assault against Judge Brett M. Kavanaugh, the Supreme Court nominee, internet investigators began combing her past for clues about her possible motives, and trying to cast doubt on the veracity of her claims.” 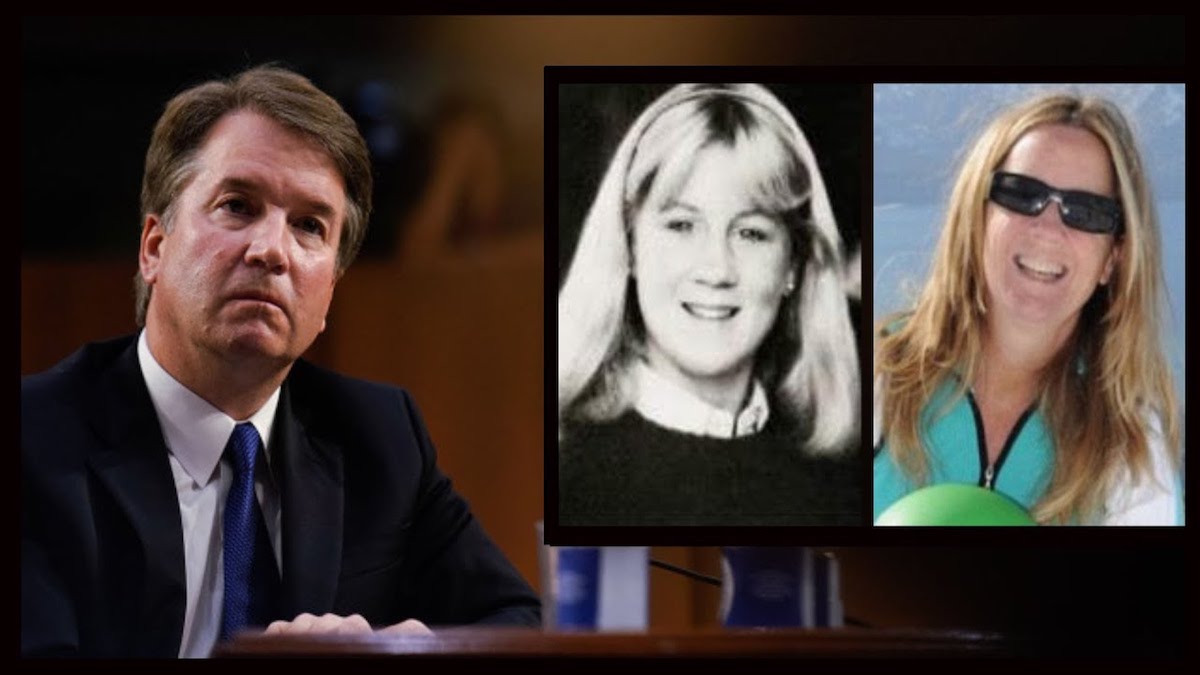 “Since then, Dr. Blasey, as she is known professionally, has been the subject of a torrent of misinformation online. Some viral rumors about Dr. Blasey have been quickly debunked. But false claims have continued to spread on Facebook, Twitter, Reddit and other social networks.”

“Here are several of the most visible false and misleading claims about Dr. Blasey, along with explanations of what’s really happening.” 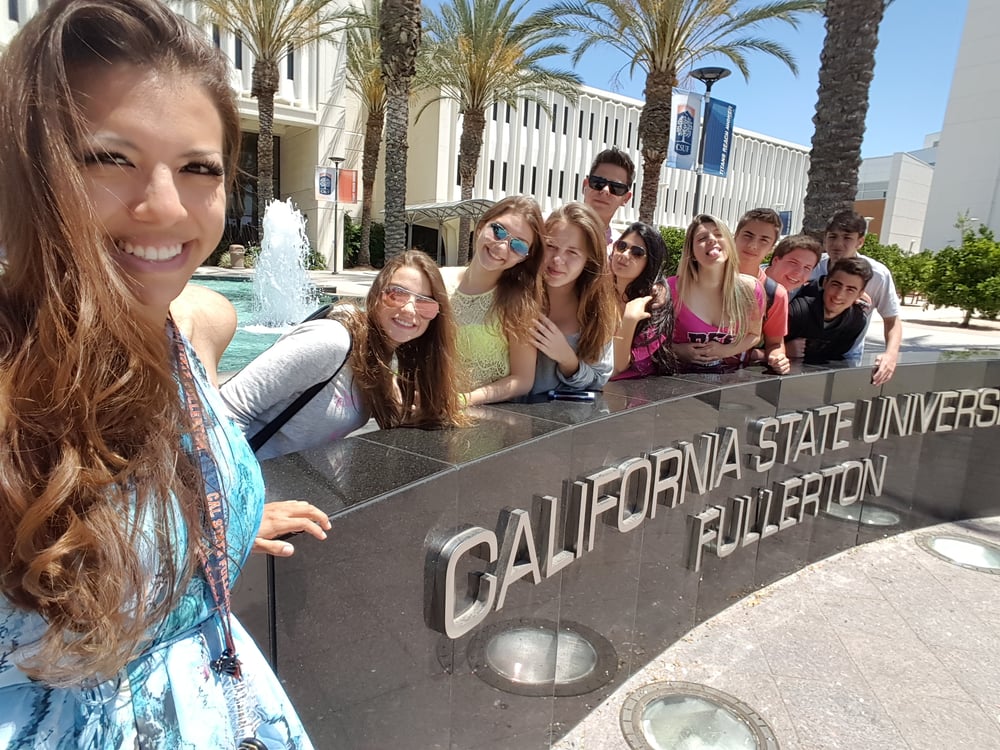 This viral rumor is based on a case of mistaken identity. The RateMyProfessors.com page on which these negative reviews were found is about Christine A. Ford, a professor of human services at California State University Fullerton. Christine Blasey Ford, Judge Kavanaugh’s accuser, teaches at Palo Alto University.

This story made an early appearance on Grabien, a little-known news website. It was then picked up by several right-wing media outlets, including by the Fox News host Laura Ingraham, who tweeted a link to it, and the Drudge Report, which featured it on its home page. Grabien later issued a correction and published an editor’s note apologizing for the error. But the article remained online, and several other websites have since picked it up.

Internet sleuths quickly zoomed in on a 22-year-old civil court case involving Judge Kavanaugh’s mother, Martha Kavanaugh, a district court judge in Maryland, in which Dr. Blasey’s parents, Ralph and Paula Blasey, were the defendants. Judge Kavanaugh, some said, had ruled against the Blaseys, costing them their house and creating a revenge motive for Dr. Blasey.

Judge Kavanaugh’s mother foreclosed on the home belonging to the parents of Christine Blasey Ford. What a coincidence?!

Note to reporters: a growing body of blogs are posting that Kavanaugh’s mother presided over the foreclosure of Christine Blasey Ford’s childhood home or, at a minimum, her parents’ home. I encourage you to honestly vet this as it could explain motive or fuel conspiracy

There was, in fact, a 1996 foreclosure case involving Martha Kavanaugh and Dr. Blasey’s parents. But according to CBS News, the Blaseys settled with their bank, and Judge Kavanaugh dismissed the case. Citing court records, Snopes noted that Judge Kavanaugh’s ruling actually allowed the Blaseys to keep their home.

The Blaseys settled w/their lender. The bank asked Judge Martha Kavanaugh to dismiss the case. She did. The Blaseys kept the house.

There’s no record they appeared in her courtroom.

“But the story nevertheless made it onto conservative news sites including Gateway Pundit, which used the headline “Bad Blood: Judge Kavanaugh’s Mother Foreclosed on Far Left Accuser’s Parents’ Home.” The story has not yet been corrected.”

“This claim seems to have originated with a Twitter user, Josh Cornett, who appears to have a history of amplifying right-wing misinformation. (The user’s account has tweeted messages of support for QAnon, a sprawling pro-Trump conspiracy theory.)”

“On Tuesday, Mr. Cornett, referring to Senator Dianne Feinstein, a California Democrat,  tweeted: “According to sources Diane [sic] Feinstein’s reluctance to mention the Kavanaugh accuser’s letter during confirmation session is because the accuser sent a similiar [sic] letter directed at Judge Gorsuch last year.” In a follow-up tweet, he said that he had “no idea” if the information was true, but that “my source has been very accurate in the past.”

“There is no known letter sent by Dr. Blasey about Justice Gorsuch, or any other Supreme Court justice. Still, the tweet got more than 7,000 retweets.”

Claim: Dr. Blasey is a major Democratic donor with a long history of left-wing activism.

“Some critics of Dr. Blasey quickly painted her as a devoted left-wing activist and donor with an ax to grind.”

“Neither phrase appears in a search of public Facebook posts in 2016. It’s possible that the phrases appeared in posts that have since been deleted from Dr. Blasey’s accounts. But these claims don’t contain links to old posts, or any other form of attribution. The account of the Twitter user who appeared to originate the claim, @LodgeNixon, has since been deleted, and no evidence of the purported Facebook post has emerged.”

“Memes containing this dubious claim, and several others about Dr. Blasey, have gone viral on Facebook, and have been shared inside several large private Facebook groups.” 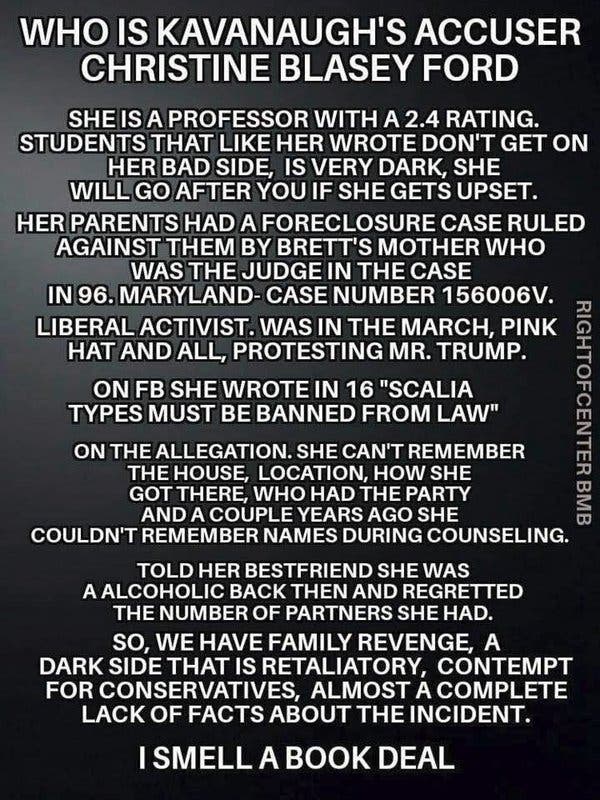 “It is no secret that Dr. Blasey is a registered Democrat who has given money to progressive organizations and campaigns — these facts were reported by the The Washington Post in the original story naming her as Mr. Kavanaugh’s accuser. But she appears to be far from a big-money donor. According to data from the Federal Election Commission, her donations to Democratic committees and campaigns from 2013 to 2017 total less than $100.”