aside Many Entities Opposing SCOTUS Nominee Kavanaugh Confirmation Vote Scheduled For 10/5/18 am.

There are numerous institutions including the Dean of the Yale Law School opposing the confirmation of the US Supreme Court nominee Judge Brett Kavanaugh. The Yale Law School Dean qualified his opposition pending a FBI investigation. I find it hard to believe that the current FBI work product would meet his standards.
Here’s the rest of the story…

As per a 9/28/18 AP report by Ashraf Khalel, “Educational, legal and religious institutions important to the life of Supreme Court nominee Brett Kavanaugh have come out with calls to either delay or outright cancel the confirmation process.”

“The calls from the dean of Yale Law School, the president of the American Bar Association, and the magazine of the Jesuit religious order come as the Senate wrestles with how to proceed with the Kavanaugh nomination in the face of allegations of sexual assault.”

“The most recent of these calls came from Yale, Kavanaugh’s alma mater for both undergraduate studies and law school. Heather Gerken, dean of the Yale Law School, called Friday for a delay pending additional investigations into allegations against Kavanaugh of sexual misconduct in both high school and college. Proceeding with the confirmation without those investigations would be against “the best interest of the court or our profession,” Gerken wrote.”

Former Supreme Court Justice John Paul Stevens told a Boca Raton crowd on Thursday that Brett Kavanaugh’s performance during a recent Senate hearing should disqualify him from the bench.

Stevens said he once held a high opinion of Kavanaugh, a U.S. Circuit Court judge who clerked for retiring Justice Anthony Kennedy, and said Kavanaugh “had the qualifications” for the country’s highest court. But he added: “His performance in the hearings changed my mind.”

“The Senators should pay attention to this,” Stevens reportedly said.

The comments were first reported via Twitter by Palm Beach Post reporter Lulu Ramadan, who was at the event.

Stevens said he once thought Kavanaugh “had the qualifications” to be a Supreme Court justice and even lauded Kavanaugh in one of his books for a ruling on political contributions. “His performance in the hearings changed my mind.”

Retired U.S. Supreme Court Justice John Paul Stevens, a lifelong Republican, told a small crowd in Boca Raton that Judge Brett Kavanaugh’s performance at confirmation hearings should disqualify him. “The Senators should pay attention to this.” 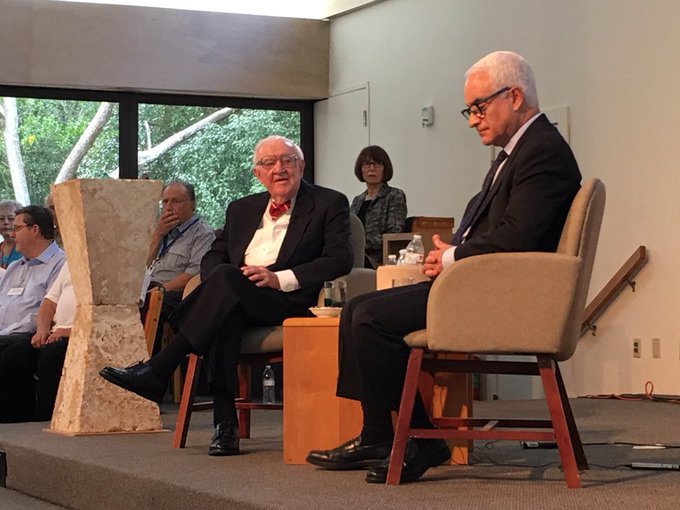 Twitter Ads
Stevens, 98, was appointed to the Supreme Court by Republican President Gerald Ford and served as an associate justice until his retirement in 2010.

While a lifelong Republican, he at times sided with liberals on the bench, including writing a dissenting opinion in Bush v. Gore decision. He recently penned an op-ed calling for the repeal of the Second Amendment.

Twitter Ads info and privacy
“At the behest of Senate Majority Leader Mitch McConnell, the upper chamber will take the first procedural vote Friday on whether to confirm Kavanaugh. The vote was delayed by a week for the FBI to investigate sexual assault allegations made against Ford by a woman who knew Kavanaugh in high school.”

“The allegations were the subject of a highly viewed Senate Judiciary Committee hearing, in which both Kavanaugh and his accuser testified.”

“Striking a combative and defiant tone, Kavanaugh defended himself against the accusations and declared himself the victim of a conspiracy by Democrats to smear President Donald Trump and enact revenge for presidential nominee Hillary Clinton. In response to questions about his behavior in high school, he repeatedly told Senators, “I like beer,” but denied he ever failed to remember anything after a night of drinking.”

“It was this performance that Stevens said should disqualify Kavanaugh. Since then, former classmates have come forward to dispute Kavanaugh’s characterization of his drinking habits.”

“At that time, I thought (Kavanaugh) had the qualifications for the Supreme Court should he be selected,” Stevens said, according to the Post. “I’ve changed my views for reasons that have no relationship to his intellectual ability … I feel his performance in the hearings ultimately changed my mind.”

As per a NY Times opinion piece dated OCT. 3, 2018, 2,400+ Law Professors penned a letter stating that the US Senate Should Not Confirm Kavanaugh:

The following letter will be presented to the United States Senate on Oct. 4.

“Judicial temperament is one of the most important qualities of a judge. As the Congressional Research Service explains, a judge requires “a personality that is even-handed, unbiased, impartial, courteous yet firm, and dedicated to a process, not a result.” The concern for judicial temperament dates back to our founding; in Federalist 78, titled “Judges as Guardians of the Constitution,” Alexander Hamilton expressed the need for “the integrity and moderation of the judiciary.”

“We are law professors who teach, research and write about the judicial institutions of this country. Many of us appear in state and federal court, and our work means that we will continue to do so, including before the United States Supreme Court. We regret that we feel compelled to write to you, our Senators, to provide our views that at the Senate hearings on Sept. 27, Judge Brett Kavanaugh displayed a lack of judicial temperament that would be disqualifying for any court, and certainly for elevation to the highest court of this land.”

“The question at issue was of course painful for anyone. But Judge Kavanaugh exhibited a lack of commitment to judicious inquiry. Instead of being open to the necessary search for accuracy, Judge Kavanaugh was repeatedly aggressive with questioners. Even in his prepared remarks, Judge Kavanaugh described the hearing as partisan, referring to it as “a calculated and orchestrated political hit,” rather than acknowledging the need for the Senate, faced with new information, to try to understand what had transpired. Instead of trying to sort out with reason and care the allegations that were raised, Judge Kavanaugh responded in an intemperate, inflammatory and partial manner, as he interrupted and, at times, was discourteous to senators.”

As you know, under two statutes governing bias and recusal, judges must step aside if they are at risk of being perceived as or of being unfair. As Congress has previously put it, a judge or justice “shall disqualify himself in any proceeding in which his impartiality might reasonably be questioned.” These statutes are part of a myriad of legal commitments to the impartiality of the judiciary, which is the cornerstone of the courts.”

“We have differing views about the other qualifications of Judge Kavanaugh. But we are united, as professors of law and scholars of judicial institutions, in believing that he did not display the impartiality and judicial temperament requisite to sit on the highest court of our land.”

Link to view all signatures: Opinion | The Senate Should Not Confirm Kavanaugh. Signed, 2,400+ …