There are tons of snippets being reported as to whether the news outlet, USA Today should have published the republican President Donald J. Trump’s op-ed piece on Medicare/ healthcare insurance. My thinking is USA today did all of us (non-Trumpian) a favor as now, we have his thinking on this subject in writing, proving that he knows virtually nothing about this subject matter; and the fact checkers could dissect it to educate the public.

As it turns out, the professional fact checkers went to work. They are detailing about how just about every sentence contains an error.

This is one of my favorite GOP talking points regarding republicans’ doomsday forecasts regarding the concept for’Medicare for all’ where the government would start rationing and telling the doctors how to treat their patients. Guess what? The health insurance companies are already doing this. Ask anyone diagnosed with an expensive illness like cancer, how they have to fight tooth and nail to obtain the kind of health care that the president takes for granted.

“President Trump wrote an opinion article for USA Today on Oct. 10 regarding proposals to expand Medicare to all Americans — known as Medicare-for-All — in which almost every sentence contained a misleading statement or a falsehood.”

“Many of these are claims we have already debunked. Presumably, the president is aware of our fact checks — he even links to two — but chose to ignore the facts in service of a campaign-style op-ed. Medicare-for-All is a complex subject, and serious questions could be raised about the cost and how a transition from today’s health-care system would be financed. Trump correctly notes that studies have estimated that the program — under the version promoted by Sen. Bernie Sanders (I-Vt.) — would add $36 trillion in costs to the federal government over 10 years.”

But this is not a serious effort to debate the issue. So as a reader service, we offer a guide through Trump’s rhetoric.

“Throughout the year, we have seen Democrats across the country uniting around a new legislative proposal that would end Medicare as we know it and take away benefits that seniors have paid for their entire lives.”

“Sanders has unveiled a plan he calls “Medicare-for-all.” Essentially, it is a single-payer plan. That means all of the bills would be paid by one entity — the federal government — in contrast to the hodgepodge health-care system now in place. Medicare, the health care system for the elderly and disabled, is a federal single-payer plan, but people under 65 get insurance from employers, through the individual market (Obamacare) or through Medicaid, the federal-state health system for the poor. Private health insurance plans, such as those offered through employers, would be eliminated, according to the Congressional Research Service.”

“Sanders says he would first improve Medicare for seniors and the disabled by eliminating deductibles and covering dental, vision and hearing aids, which are not covered under current law. Then, over the course of four years, the eligibility age would be lowered in stages until every American was covered.”

“On paper at least, the Sanders plan would improve benefits for seniors, not take them away.”

“There are several other versions, including proposals more limited in scope (such as “Medicare-X”) that would simply offer a Medicare option as a buy-in. The Kaiser Family Foundation has a useful guide to the differences.” 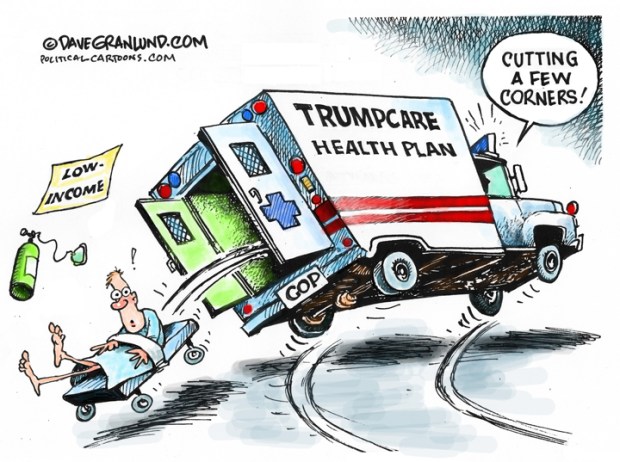 “As a candidate, I promised that we would protect coverage for patients with pre-existing conditions and create new health care insurance options that would lower premiums. I have kept that promise, and we are now seeing health insurance premiums coming down.”

“Trump made this promise, but broke it. He supported Republican plans that would have weakened protections for individuals with preexisting conditions. His administration also has refused to defend the Affordable Care Act against a lawsuit that would undermine those protections. In effect, the Trump administration no longer supports a provision of the ACA, a.k.a. Obamacare, that makes it possible for people to buy insurance if they have preexisting health conditions. (We labeled this as a flip-flop.)” 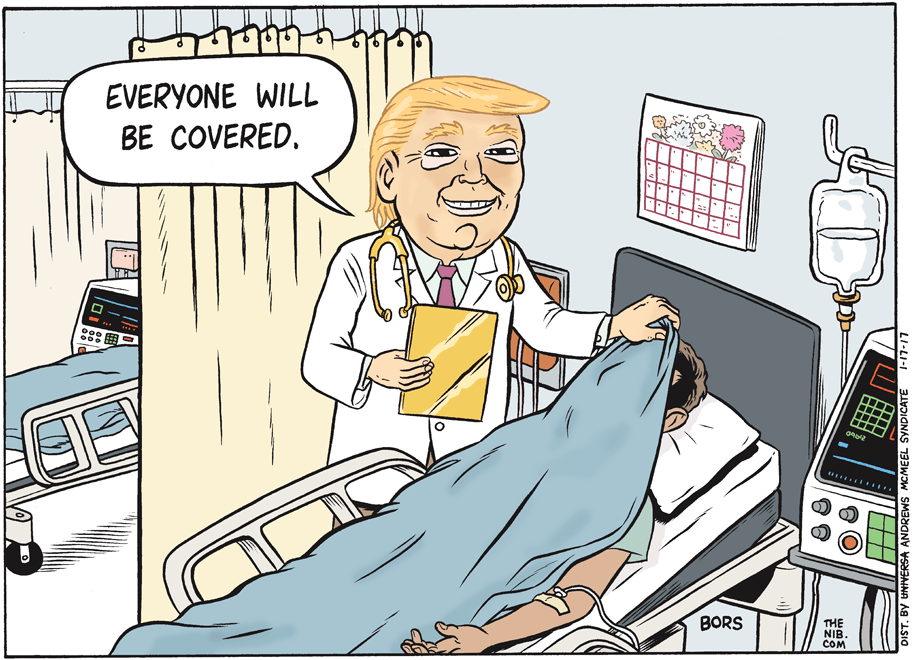 “As for premiums, they have continued to increase on average, just at a lower rate than in the past. But experts say that without Trump’s moves to weaken the Affordable Care Act, premiums would be even lower in many states.”

“I also made a solemn promise to our great seniors to protect Medicare. That is why I am fighting so hard against the Democrats’ plan that would eviscerate Medicare.”

“Under Trump, the date for when the Medicare Hospital Insurance (Part A) trust fund will be depleted keeps advancing. The current projection is 2026, three years earlier than the projection a year earlier.”

“Part A is financed mainly through payroll taxes of 1.45 percent on earnings paid both by workers and employers; self-employed people pay 2.9 percent. The money raised is then credited to a pay-as-you-go trust fund, which uses the revenue raised to pay the benefits of Medicare beneficiaries.”

“With the baby-boom generation retiring at a rate of 10,000 people per day, that puts pressure on the long-term financing of the program because fewer workers will be supporting more retirees. If the trust fund is depleted, that means the government would not be able to cover 100 percent of estimated expenses. Yet because of Trump’s tax cut, the budget deficit is soaring even as the economy is booming, in contrast to previous periods of under-4-percent unemployment. That leaves the government less prepared to deal with the consequences of baby-boom retirements.”

“Democrats have already harmed seniors by slashing Medicare by more than $800 billion over 10 years to pay for Obamacare.”

“Trump resurrects a misleading Republican talking point from the 2012 election.”

“The Affordable Care Act actually strengthened the near-term outlook of the Part A trust fund. The law includes a 0.9 percent payroll tax that hits the wages and self-employment income of wealthier Americans — above $250,000 per couple or $200,000 for a single taxpayer. That was estimated to raise an additional $63 billion for the Part A trust fund between 2010 and 2019. The law also was estimated to cut expenses, including $162 billion in productivity adjustments to provider payments and $86 billion in reduced payments to Medicare Advantage plans. The net result was that the “insolvency” date was extended by 12 years.”

“In other words, the savings that Trump complains about mostly were wrung from health-care providers, not Medicare beneficiaries — who, as a result of the health care law, ended up with new benefits for preventive care and prescription drugs.”

“The Democrats’ plan means that after a life of hard work and sacrifice, seniors would no longer be able to depend on the benefits they were promised.”

“As noted, the Sanders plan in theory would expand benefits for seniors.”

“The Democratic plan would inevitably lead to the massive rationing of health care. Doctors and hospitals would be put out of business. Seniors would lose access to their favorite doctors. There would be long wait lines for appointments and procedures. Previously covered care would effectively be denied.”

“This is a scare scenario. Obviously, a transition to single-payer health care would lead to upheaval and uncertainty since it would encompass the entire health care system, not just the small piece covered by Obamacare. But other countries appear to manage with single-payer systems, at lower costs than the United States. Trump’s vision of what would happen under single-payer echoes the fears evoked by opponents of Medicare in the 1960s and Obamacare in 2010. So there’s a Chicken-Little feel to this language.”

Link to rest of the analysis: The Washington Post’s fact check on president’s op-ed piece on Medicare