The US Secretary of Education Betsy DeVos has to be the most hated of anyone who ever had this position in previous years. She has managed to become Cruella de Vil, despised by even many republican teachers. She has done everything possible to diminish the power of teacher’s unions. I suspect that this has long been one of her primary goals, as this has been one of the republicans’ top priority plan for years.

There’s been a lot of push back by the teachers’ unions over her tactics.

See: ‘Betsy DeVos is the worst secretary of education ever’ — teachers union leaders come out swinging

Her history of when she headed the Michigan school system where she promoted the concept of ‘charter schools’ was a dismal failure across the board.

In addition to all of the above, Betsy DeVos has done her best to represent the interests of for-profit-colleges by trying to end regulations designed to protect students from their predatory practices of pushing student loans and then preventing the students from filing complaints via the (CFPB) Consumer Financial Protection Bureau, a regulatory program established during President Barack Obama’s administration.

“U.S. District Judge Randolph Moss decided against the request from a group representing for-profit colleges to end regulations that help defrauded students receive federal loan forgiveness and forbid colleges from requiring students to go to arbitration to resolve complaints instead of taking matters to court, according to Politico. As a result of Moss’ decision, the consumer protections passed under President Barack Obama will now go into effect, especially because Moss has previously struck down attempts by DeVos to delay the regulations from being implemented.”

“Moss’ ruling is “an important step for borrowers and should be a signal for the department that its deregulatory agenda is both hurting borrowers and is not going to tolerated by the courts,” Julie Murray, a staff attorney at Public Citizen, which challenged DeVos’ delays in implementing the Obama consumer protections, told Politico. She later added, “The department as of noon today has a legal obligation to implement this rule and, to the extent they don’t abide by that legal obligation, that is something that we and other consumer advocates will be watching closely.”

“By contrast, Steve Gunderson, president and CEO of Career Education Colleges and Universities, said that he hopes the Trump administration will try to obstruct the implementation of the rules regardless of the court’s decision.”

“DeVos has been a highly controversial figure since taking office in the Trump administration, for reasons ranging from her support for school vouchers to her uninformed answers during her Senate confirmation hearing. Back in May, she incurred the ire of teachers’ unions by giving responses to questions that seemed to blame them for seeking a better standard of living. As Salon wrote at the time:”

“Although DeVos’ school choice agenda was a major topic of discussion — DeVos has long been an advocate of expanding access to charter schools and private schools through voucher programs, which public school officials worry will hurt their districts — the education secretary also expressed unflattering opinions about the teachers in various states who have gone on strike.”

“DeVos conveyed this view in response to a question about striking teachers by Josh Meibos, Arizona’s teacher of the year. After telling Meibos that she could not “comment specifically to the Arizona situation,” DeVos added that she wanted to see a situation in which “adults would take their disagreements and solve them not at the expense of kids and their opportunity to go to school and learn,” according to audio published by The Huffington Post.” 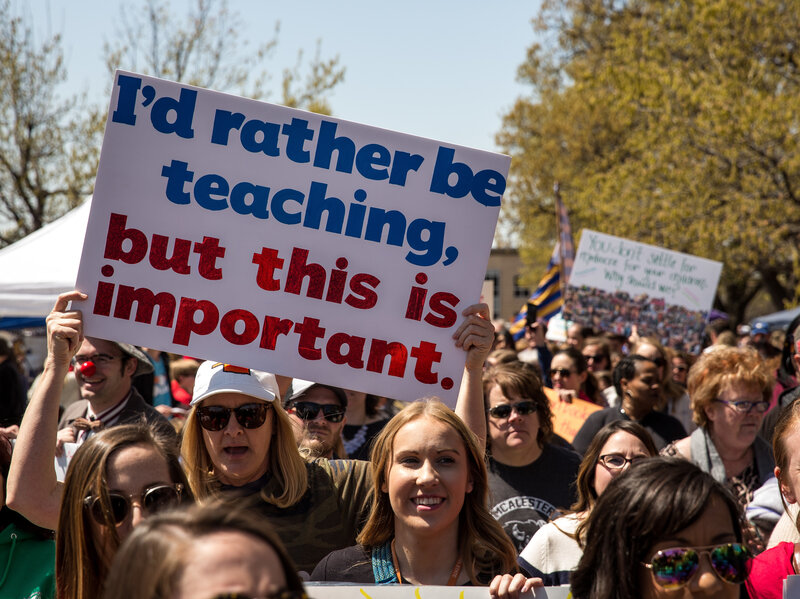 “She added, “I’m very hopeful there will be a prompt resolution there. I hope that we can collectively stay focused on doing what’s right for individual students and supporting parents in that decision-making process as well. And there are many parents that want to have a say in how and where their kids pursue their education, too.”

“Lest there be any doubt as to DeVos’ opinion that teachers who were striking were doing so at the expense of the children, she concluded that “I just hope we’re going to be able to take a step back and look at what’s ultimately right for the kids in the long term.” 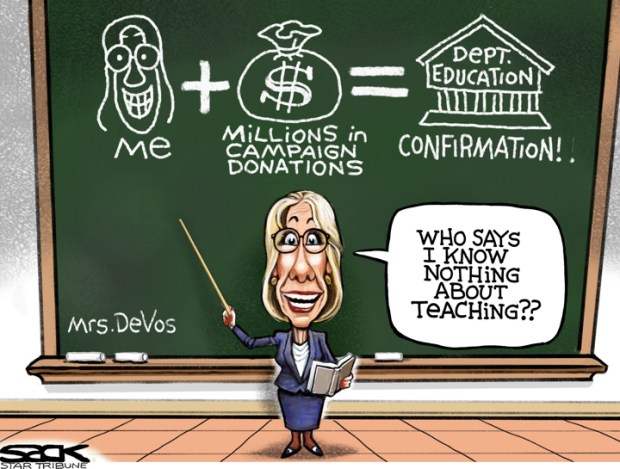