aside Republicans, Welcoming White Supremacists Into The GOP Fold=Supporting Antisemitism 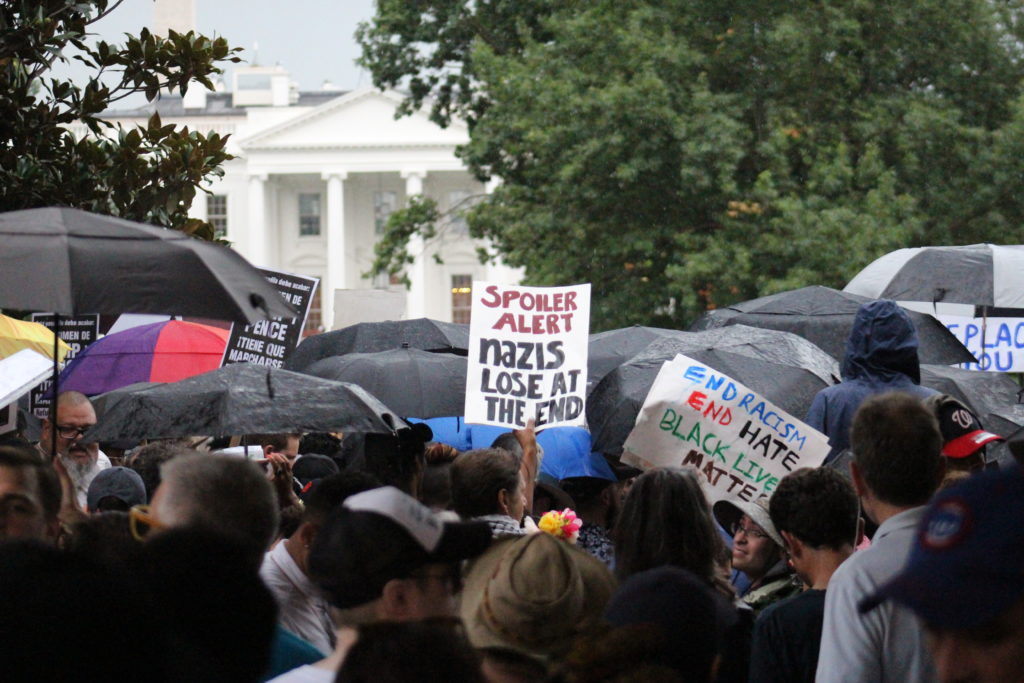 Dear Republican Party Members, you cannot continue your “Southern Strategy” tactic to win elections by doing the siren song to those who participate in Neo-Nazis type groups, and then claim that your party wants no part of antisemitism. This becomes a false claim because those White Supremacist folks are virulently antisemitic. It is this group of folks who are more prone to resort to violence than any other terrorist group within the USA.

As per a 10/ 27/18 VOX report by Tara Isabella Burton,”This shooting comes amid a steady increase in anti-Semitic incidents and hate crimes since the 2016 presidential campaign season and, in particular, the inauguration of Donald Trump.”

“In the last year for which complete data is available, the Anti-Defamation League (ADL), an advocacy group dedicated to combating anti-Semitism, found that there had been 1,986 reported anti-Semitic incidents in the US that year, including acts of vandalism as well as physical violence. That figure was a 57 percent increase from 2016, which itself had seen a 35 percent uptick in incidents from 2015.”

See: Op-ed in The Atlantic

We are not talking about those from the left cornering GOP lawmakers while they are out to dinner. We are talking about outright violence. There is a huge divide between the two, where any moral equivalency type justifications by GOP leaders does not hold water.  In addition, Democratic leaders like President Barack Obama, Rep. Nancy Pelosi and others have pushed back on those within their ranks who condone these tactics. The Democratic leaders have consistently decried violence as tool to be used against opponents.

Contrast this stance with that of the republican President Donald Trump who spouts his rhetoric of hate, divisiveness, his demonizing of other like the press, law enforcement entities like the FBI, US Department of Justice (DOJ) and others who simply disagree with him.

In most of his rallies, he has a habit of touting violence like bragging about a US Congressman physically attacking a journalist; stating that he’ll pay the legal bills if his followers hurt a heckler in their midst.

He describes the Democratic Party members as evil. He frequently talks about the press being the enemy of the peoples. He refers to the caravan of Honduran refugees seeking asylum in the US as criminals, rapists, MS-13 gang members, INVADERS, even though he has no facts. evidence to back up his claims. He has ordered over 5000 active military personnel to control the invading caravan which will be nowhere near the US-Mexican border before the 2018 Midterm US elections. But this makes him look good to his racist/ anti-immigration/ antisemitic faction of his base to where they will be motivated to get out and vote for republican candidates.

Then there is the false claim disseminated by the likes of US Rep. Kevin McCarthy and LOU Dobbs of FOX News that the refugee caravan was being paid for by by the democratic billionaire George Soros.

On 10/29/18, Talking Points Memo’s Josh Marshall caught a re-airing of the Dobbs-Farrell discussion and he tweeted: 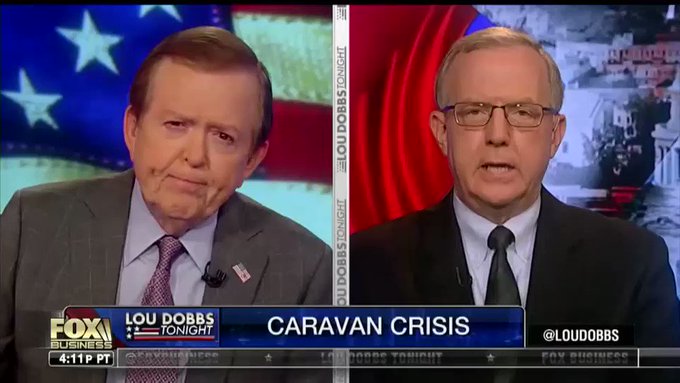 Straight out of the Protocols of the Elders of Zion. Just moments ago, Lou Dobbs guest Chris Farrell (head of Judicial Watch) says Caravan is being funded/directed by the “Soros-occupied State Department”.

Straight out of the Protocols of the Elders of Zion. Just moments ago, Lou Dobbs guest Chris Farrell (head of Judicial Watch) says Caravan is being funded/directed by the “Soros-occupied State Department”.

2/ For those who don’t know this world, “ZOG” is a staple of white supremacist/neo-Nazi websites/literature etc. Stands for “Zionist occupied government”, i.e., US govt being controlled by Jews. This guy knows exactly what lever he’s pulling when he uses this phrase.

Even Sheppard Smith of FOX TV News took time to publicly push back on the conspiracy theory that the Honduran caravan of refugees are really invaders, but this news bite was short-lived as later another pundit described the refugees as invaders who were carrying diseases like leprosy, tuberculous and small pox.

This trafficking in conspiracy theories which are then amplified by the US president, Republican Party leaders and their media friends at FOX News, Breitbart, InfoWars, the Daily Caller and others, has already done real harm.

It was this most recent conspiracy tale that set off a recent mass shooting which is the one about the invading refugee caravan was being paid for by by the democratic Jewish billionaire George Soros.

On the 27th of October, 2018, 46 year old Nazis follower carried out a mass shooting in a Jewish synagogue, Tree of Life, located in Pittsburgh, PA. where 11 attendees were killed and 6 injured including 4 police officers.

But it turns out that the mass shooter Robert Bowers of innocents in the Tree of Life Synagogue complained about our Jewish brothers and sisters for assisting the transition of refugees/ immigrants into the USA.

Link to report: Who Is Robert Bowers, the Suspect in the Pittsburgh Synagogue

The following notes are from a previous blog…

It is my opinion that President Trump has been sending a signal sub rosa to White Supremacist type groups who now like to refer to themselves as “White Nationalists.” when President Trump recently started referring to himself as a “Nationalist,” by itself. After all, he needs their votes.

Then in almost the next sentence he uses the word ‘Globalists’ and states that he’s not one of those who claim to be a globalist.

As the Anti-Defamation League’s Jonathan Greenblatt puts it, “The term originates from a reference to Jewish people who have been seen as having allegiances not to their countries of origin like the United States, but to some global conspiracy.” Greenblatt said it’s “disturbing” when public officials “literally parrot this term which is rooted in prejudice.” 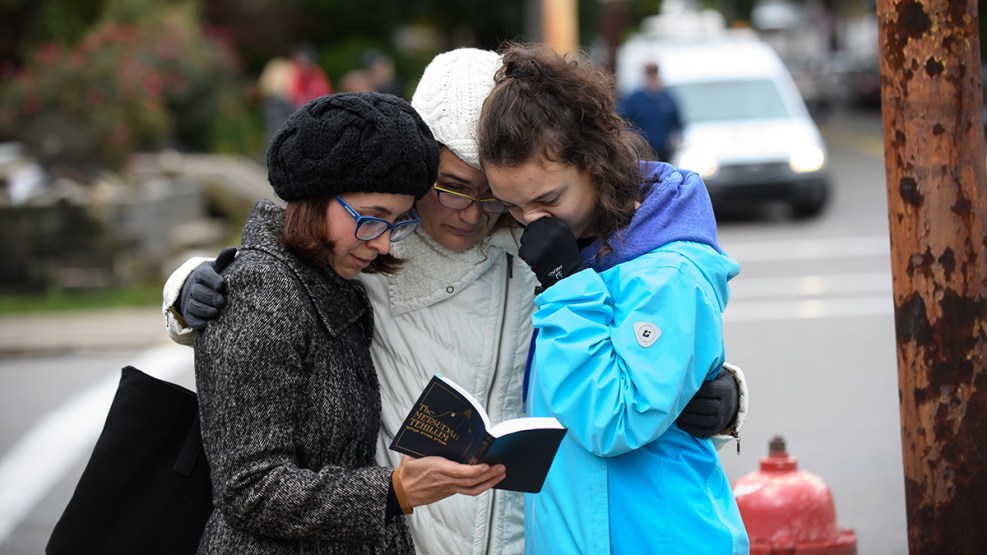 Since the end of the civil rights movement and under Republican strategist Lee Atwater’s “Southern strategy” (Nixon days) that used racism as an unstated weapon against Democrats, the Republican Party itself has played a welcoming host to racial tensions and fears.

As per a 7/9/18 VOX report by Jane Coaston, “More important, (republican) candidates like Walker and Jones (both White Supremacists) threaten to further inculcate the idea that the Republican Party is inherently susceptible to candidates who espouse racist and anti-Semitic ideas. The Republican Party is, after all, both the party of Lincoln, and the party of Richard Nixon and Lee Atwater’s Southern strategy aimed at getting racists on board without, in Atwater’s own words, “saying, ‘nigger, nigger, nigger.’” And it’s also the party of the nation’s most prominent birther, who rode to the White House on a wave of what researchers in December 2017 called “racial resentment.”

“In the wake of Trump’s “very fine people on both sides” comments after Charlottesville, and with his outward support of Corey Stewart and silence on other extremist candidates, and with what feels like more and more Republican candidates with connections to racist and anti-Semitic ideas and figures emerging by the day, that idea isn’t likely to go away.”

The mail delivery of 15 pipe bombs between October 22-29, 2018, to Democratic Party officials/ leaders and CNN who just happen to be on President’s favorite hit list..

No sooner did the story become public around 10/22/18, about several Democratic icons having been the recipients by mail of manila envelops containing IEDs, did the president and his cronies start up the conspiracy theory that this act of widespread domestic terrorism, was a false flag, and that the pipe bombs were fake. Too many republicans are getting on the band wagon with President Donald Trump and his sycophant anti-immigration base of voters to turn back what is truly great about the USA, our diversity based on the welcoming of immigrants from all over the world including from those so called sh*th*le countries with peoples of color, as he describes them.

The republican party members cannot lay claim to being against antisemitic folks while overtly tolerating, catering to the racist groups within their ranks. The racist type groups frequently equal those who trumpet anti-immigration and antisemitism sentiments and who are not adverse to the usage of violence.