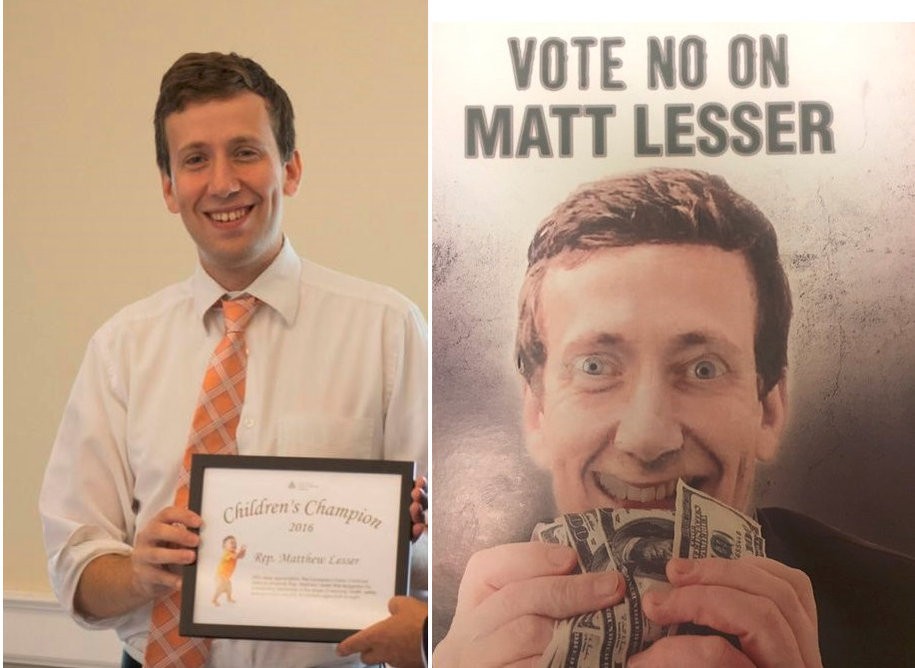 Wouldn’t it make sense for any Republican Party candidate to avoid controversial ads depicting a Jewish man in an unflattering light against their Democratic Party opponents, especially now, when we are reeling from the shock of a mass shooting of the Jewish faithful at Pittsburgh’s  Tree of Life Synagogue, on the 27th of October 2018, by a middle aged man who acted out of his hatred towards our Jewish brothers and sisters.

But no, there is one republican candidate in Connecticut where winning meant putting out an advertisement that portrays a Jewish greedy man, meant to ignite anti-Semitic impulses of some of his voters, enough to prompt them to get out to vote for him.

As per an AP report, “The ADL says the mailing comes amid a rise in reported anti-Semitic incidents, including Saturday’s shooting that left 11 people dead and six others wounded inside a Pittsburgh synagogue.”

On October 30, 2018, Eli Rosenberg of the Washington Post penned the following report,  “Republican mailer depicts a Jewish candidate gripping cash and grinning. The GOP is defending it.”

“A campaign mailer sent out by a Republican candidate for a state Senate seat in Connecticut is being widely denounced for using anti-Semitic tropes in an illustration of his Democratic challenger, who is Jewish.

The advertisement, which was sent out by Republican Ed Charamut’s campaign, depicts his challenger, Democratic state Rep. Matthew Lesser holding a wad of cash in front of him, with a crazed look in his eyes.

“The mailer drew wide outrage after it was reported on Tuesday, as concern about rising anti-Semitism runs high in the wake of the massacre of 11 Jewish congregants at a Pittsburgh synagogue. The embrace of racially charged policies and rhetoric by Republicans, from President Trump to candidates across the country, has emboldened white-supremacist groups, and, critics say, raised questions about the party’s intent.”

“Lesser told The Washington Post that he was incredulous when he first heard of the issue from some people in the district, which includes Middletown.

“I did not believe them, because we live in America,” he said. “I assumed it was some sort of mistake or misunderstanding.”

“He said that his likeness had been photo-shopped significantly in the mailer, raising further questions about his opponent’s aim. In addition to the hands grabbing $100 bills that were added to the picture, Lesser’s face has been altered with a smile and a crooked look in his eyes, he said.”

The ad was widely condemned by a broad range of commentators on Tuesday (10/30/18).

“This is not a problem of individual monsters,” wrote New America fellow Jill Filipovic. “It is a concerted effort to fan the flames of anti-semitism and stir up fear and hatred.”

“We do know, though, the feelings that the flier is evoking — the juxtaposition of a Jewish candidate for office and money in this manner suggests an age-old anti-Semitic trope,” Steve Ginsburg, of the Anti-Defamation League’s Connecticut office, told the Hartford Courant. “We can’t and don’t know the [motive] of the producer of the flier, but we do know its impact, and they should clarify what they meant.”

“Stuart S. Miller, the academic director of the Center for Judaic Studies and Contemporary Jewish Life at the University of Connecticut, told the newspaper that the ad was “reprehensible, deeply offensive and inexcusable.”

“I cannot believe that it is an innocent allusion to a supposedly money-spending Democrat,” he said. “It just leaves me shaking my head as to the lengths some people will go to get elected or to stay in office, particularly in the present climate.”

“It uses imagery that’s been used to vilify the Jewish people for hundreds of years, and grossly caricatured my face and has me clutching a pile of money,” he said. “That’s as explicitly anti-Semitic as anything can be.”

“Charamut, 60, a Republican member of a local town council, defended his use of the image, claiming that it was intended to be a comment on tax policy.”

“Those wishing to portray a graphic illustration as something hateful are completely wrong,” he said in a statement that continued to attack Lesser. “I reject hate speech in all its forms. The mailer draws a stark contrast between myself and Matt Lesser. Do you want to protect your wallets, or do you want to make Matt Lesser your new state Senator?”

“When I look at that, I don’t see Jewish,” J.R. Romano, the state party chairman, told the Hartford Courant. “The Democrats have false outrage all the time.”

“Republican candidates around the country have raised eyebrows during the run-up to next week’s midterm elections by using rhetoric and advertisements that critics have said play to racial prejudices.” In New York, Republicans have continually assailed a Democratic congressional hopeful’s decade-old rap career, despite his work as an attorney and a Rhodes Scholar.

“In Georgia, Republican Brian Kemp used an ad with a tap dancer to show his opponent in the governor’s race, black Democrat Stacey Abrams, “dancing around the truth,” that was also criticized as having a racist undertone.

“In Florida, a Republican official claimed that if black Democrat Andrew Gillum won the governor’s race, “his people” would be getting paid back for slavery. Racist robo-calls have circulated in that race, as well.”

“In California, Republican Rep. Duncan Hunter, who was recently indicted on charges that he and his wife used more than $250,000 in campaign funds for personal expenses such as family vacations, has falsely accused his opponent, an American of Palestinian and Mexican descent, of trying to “infiltrate” the government and trying to “hide” family ties to terrorism.”

“Republican House Majority Leader Kevin McCarthy recently accused three Democratic donors who are Jewish — Michael Bloomberg, Tom Steyer and George Soros — of trying to buy the midterm elections, just a day after Soros, a frequent target of anti-Semites and the far right, received a pipe bomb in the mail.”

“In Iowa, Rep. Steve King (R) routinely makes the news for stunts such as retweeting a Nazi sympathizer and displaying a Confederate flag on his desk.”

“Lesser said the campaign for the state Senate seat had been hard-fought but had yet to turn truly nasty and personal before the mailer, saying he had higher hopes for local election contests despite the bitter national climate.”

“It’s in many ways very sad,” he said. “Particularity at a moment in the nation that is so clearly fraught, I think you’re doing your constituents a disservice. We know the divisiveness that the president is setting at the national level, but it’s on those of us in the trenches working in state and local government to really make our society work.”