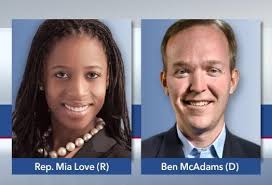 This was a hard fought race where the vote count for the elections held on November 6, 2018 have been too close to declare the winner until the 26th of November 2018. The democrat McAdams won by 694 votes.

To date, Democrats have gained 39 seats in the US House of Representatives with the possibility of hitting 40 depending on the outcome of the still uncalled election in California’s 21st District.

As per a 11/21/18 USA Today report, “A 40th seat shouldn’t be ruled out, Silver of FiveThirtyEight tweeted Wednesday, referring to the race between Republican Rep. David Valadao and Democrat TJ Cox in California’s 21st Congressional District.”

“While the AP has declared Valadao as the winner, Cox pulled within 447 votes with some 15,000 ballots left to be counted, the Fresno Bee reported Wednesday.”

“The @AP and most of the networks still have this race called for Valadao, which is just super lazy (and that’s about the nicest thing I can say about it). Should have been uncalled 10 days ago,” Silver tweeted.”

Mr. Silver read this set of circumstances. The final vote tallies have the Democratic candidate TJ Cox pulling an upset against republican Valadao by 438 votes as of November 26, 2018. Mr TJ Cox will be the 40th pick-up for Democrats where a republican US House congressional seat was flipped.

“In a wide-ranging speech that included swipes at fellow Republicans, including President Donald Trump, outgoing Rep. Mia Love on 11/26/18 called her successor in Congress a “wolf in sheep’s clothing.”

“Speaking from a teleprompter at the Utah GOP headquarters in downtown Salt Lake City surrounded by her family, Love confirmed she called Rep.-elect Ben McAdams, D-Utah, to congratulate him on winning the 4th Congressional District race.

“But she also slammed him for negative campaigning, saying the tactics he used to make a “false case” against her have “so stained the state” that Utahns should expect future elections to be similar.”

“Trump was criticized for saying at a news conference that Love lost the Nov. 6 election because she gave him “no love,” spurning his offers of support. The president did record a robocall for Love that went to a limited number of voters.”

“The president’s world, Love said, is “no real relationships — just transactions. That is an insufficient way to implement your service and policy.” She said she and Trump would have to talk.”

“Love, the first Republican woman in the House, said her re-election and Trump’s comments “shine a spotlight on the problems Washington politicians have with minorities and black Americans. It’s transactional. It’s not personal.”