What Legal Remedies Exist to Bar GOP From Robbing Democrats On Keeping Promises In WI, MI

We the people” in the States of Michigan and Wisconsin voted for Democratic Party candidates instead of republicans because of promises like democrats wanting to expand access to affordable quality healthcare insurance that covers pre-existing conditions while addressing a host of other local needs.

But the republican lawmakers in both these states still occupy the majority of seats until the newly elected democratic candidates take over in January 2019. This transition is termed the ‘lame duck session.’ In the meantime the republican legislators are in the process of hurriedly setting up barriers via legislation and other work-arounds to limit the democrats from being able to deliver on promises they made in good faith to the voters in the states of WI and MI.

The republicans are not deterred by the reality that they are robbing the citizens from having their voices heard through their votes.

The million dollar question has to be, is there a legal remedy to block these anti-democratic republicans?

On December Ed Pilkington of the Guardian penned the following report, “This is not a democracy’: Republicans try to shrink power of incoming Democrats.”

“Weeks after the midterms, several states face continued wrangling as GOP accused of undermining voters’ will.”

“A month after the midterm elections on 6 November, several states continue to be convulsed by bitter partisan fighting in which Republicans are being accused of flagrantly undemocratic attempts to steal victory from the clutches of their Democratic rivals.”

“The most intense battle is playing out in Wisconsin, where Republican lawmakers are attempting a power grab that would strip key functions from the state’s incoming Democratic governor and attorney general. Opponents are denouncing the move, which sparked protests on Monday 12/3/18), as a blatantly undemocratic negation of the November election results.”

“Similarly contentious efforts are afoot in Michigan, where Democrats regained three important statewide positions in November – that of governor, attorney general and secretary of state. Instead of accepting the will of voters, Republican lawmakers are now seeking to reduce the control of those post-holders over campaign finance and legal proceedings involving the state before the Democratic victors take office.”

“Wisconsin’s power play is attracting the most nationwide attention given the unashamed attempt by state Republicans in effect to reverse the outcome of the November ballot, in which all six statewide positions were won by Democrats, including the governorship. The Republican-controlled legislature is hoping to vote on Tuesday on 40 proposed amendments contained in five bills that would starkly weaken the remit of the incoming Democratic officeholders even before they take office.”

“The proposed changes would prevent the governor-elect, Tony Evers, and attorney general-elect, Josh Kaul, from honoring one of their central promises to voters in the midterm campaign: the pledge to pull Wisconsin out of a multi-state legal challenge to Barack Obama’s Affordable Care Act. The new legislation would also gut the state’s department of justice of several core functions, transferring them from Kaul’s office to the Republican-controlled legislature.” 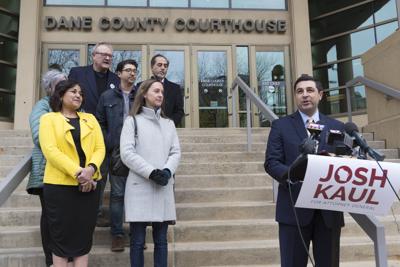 The incoming post-holders have decried their rivals’ tactics as fundamentally undemocratic. “It goes to the heart of what democracy is all about,” Evers told reporters, saying the flurry of conservative moves was “an embarrassment for the state”.

Kaul told the Wisconsin State Journal: “This is fundamentally inconsistent with how a democracy is supposed to work. If this passes it’s going to significantly impair the ability of the state government to function effectively next year, because if it passes, it’s almost certain to end up in court.”

Should the bills pass and end up for approval on the desk of the outgoing Republican governor, Scott Walker, they would bookend his eight years in office in an inferno of controversy. Walker started his governorship in 2011 by introducing the notorious Act 10, which removed most collective bargaining rights from public sector unions, sparking mass protests at the capitol building in Madison.

Those protests were echoed on Monday (12/3/18)with a fresh round of unrest in Madison, with opponents of the power grab heckling Republican lawmakers with chants of “Respect my vote”.

The audacious effort to defy the will of voters is a direct repeat of the playbook first adopted by Republicans in North Carolina two years ago. In the wake of the 2016 elections, in which the Democrat Roy Cooper unseated the Republican governor Pat McCrory, GOP leaders staged a special session in which they pared down the governor’s executive powers three weeks before Cooper took office.”

“This November, Republicans in North Carolina tried further to water down the governor’s powers with two constitutional amendments that would have limited his control over appointments to the state judiciary and board of elections. The amendments failed at the ballot box, but had they passed one commentator for the Raleigh News & Observer noted they would have reduced the role to that of “a potted plant”.

“North Carolina is back in the news this week with a continuing investigation by the state’s elections board into an extremely tight House race for the ninth congressional district. The Republican candidate Mark Harris is narrowly ahead in the contest with about 900 more votes out of 283,000 cast than his Democratic opponent, Dan McCready.”

The result has yet to be certified by the board, which is looking into irregularities over absentee ballots. Democratic voters in Bladen and Robeson counties, in the east of the state, have submitted affidavits stating that their absentee ballots were collected in unsealed envelopes by unidentified individuals.

“One voter said she had handed over her unfinished ballot to a woman who said she would “finish it herself”. “The three states in the throes of partisan tussles are at the forefront of Republican voter suppression efforts. Part of Wisconsin’s proposed new legislation in the lame-duck session is a reduction in early voting days that has the potential to bring Republican lawmakers into direct confrontation with federal courts.”

“Democrats were given a big boost in the November election by record turnout in Wisconsin in early voting, with some 565,000 taking advantage of polling stations being open before election day. Now the Republicans want to whittle down the time allotted for such voting.”

“A similar effort to restrict early voting was ruled unconstitutional in 2016 by a federal judge, James Peterson, who found that the Republican scheme “intentionally discriminates on the basis of race”. Peterson concluded that the conservative leadership had been specifically motivated by a desire to place hurdles to voting in the way of the dominant black population in the state’s largest city, Milwaukee.”

He wrote that the legislature’s goal was brazenly partisan: “to suppress the reliably Democratic vote of Milwaukee’s African Americans”.

The revival of restrictions exposes the Wisconsin legislature to possible claims of contempt of court. The liberal issue advocacy group One Wisconsin Now told reporters on Monday that it was preparing for legal action against the lawmakers depending on the outcome of the lame-duck session.

“Republicans believe they lost the November election because too many people voted, and are trying to undo the results of the vote by taking power from the elected governor and attorney general,” said Scott Ross.”

“He added: “We are a democracy only as long as elected officials don’t place themselves above the law.”

See: Stung by Election Losses, Republicans in the States Seek a Way to Neutralize Democrats/ NYT …