aside Dear GOP Corporate Donors, Stop Stealing US Democracy From The Peoples

When we see how the darker side of populism has raised its ugly head in the UK as exemplified by its Brexit nightmare, France’s recent riots over rising gasoline prices and the US democracy being led by an extremely flawed character, the republican President Donald Trump with the backing of impotent GOP lawmakers in the US Congress and their corporate donors, we can legitimately point the finger at greedy corporate executives who believe they can control the world.

Politicians in all of these countries have taken advantage of the angst growing in the hearts of average working citizens by pointing the fingers at (others) to blame but not at the real culprits. The other can be any bogeyman.

Business leaders with the assistance from lawmakers have been making trade deals that left many hard working citizens in their countries behind. Trade can be a good deal for all involved across the board, but too often the average workers’ needs haven’t been a serious consideration in the formation of these agreements.

It is my opinion that since 1973, major reasons for the American workers’ stagnant wages  have to do mostly with corporate decisions. It was corporation managers deciding to have  more and more US goods manufactured in other countries where workers’ hourly pay rates were much less; developing a greater and greater reliance in technology advances; and then there are the inevitable changes in the culture that took hold, like a greater usage by utility companies for renewable sources of energy versus fossil fuel.

What all these developments have in common with regards to the average worker becoming more and more financially squeezed over the decades, is the corporate executive making decisions without giving due deference to their front-line workers. 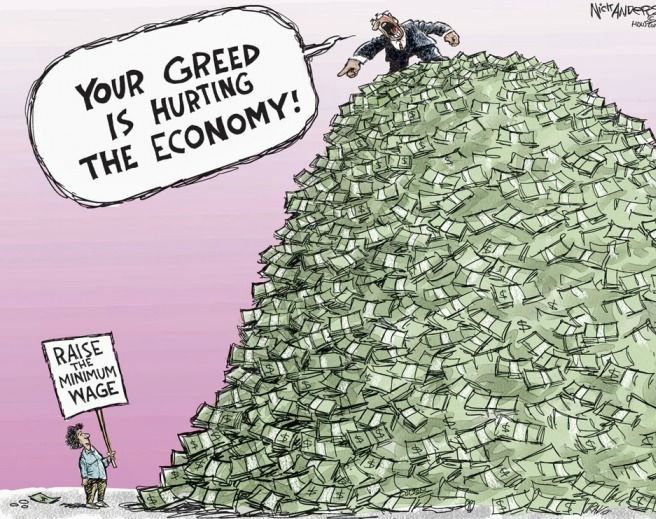 For the record, I’m pro business and pro trade but business leaders need to have a sense of responsible citizenship. Outstanding executives get that running a company by solely reducing costs will eventually doom its chances for success and this includes reducing the costs of workers by keeping their wages flat.

What any company can (and should) do to stay healthy is monitor and control expenses while striving to minimize unnecessary / wasteful) expenses. This should be done while concurrently, optimizing the allocation of resources to support the company’s long term and short term strategies. This type of “managing to the bottom line” is healthy. Organizations that focus predominantly on reducing costs and choose not to invest in current strategies (or fund investments to support future initiatives) and in their workers often fail in the long-term. In addition, the companies’ strategies, goals need to be based on facts, reality, evidence and not delusional thinking.

I’ve personally observed this delusional bubble. For example, in the 1970s when I was trying to explain to tire buyers of a major corporation that it needed to consider purchasing smaller sized tires as consumers were buying smaller cars, I was told that this phenomenon would be short lived as Americans loved their big cars. Well we all know the rest of the story.

It used to be that corporations were good citizens. For instance, after WWII until 1973, corporation executives shared the spoils of increased productivity, revenues, profits with their workers.

This change in corporate thinking just happened to coincide with conservative corporate executives like the Koch brothers, Exxon Mobil and NRA top brass getting together to form ALEC, The corporate-funded American Legislative Exchange Council in 1973. This organization was set up primarily to assist GOP lawmakers to implement legislation favorable to corporate goals like ‘tax cuts.’ ALEC has been pivotal is creating and pushing for voter ID laws in GOP led states, the ‘stand your ground’ laws stated in Florida in 2005, the dismantling of  UNIONS in the corporate world, etc.

A Towers Watson study found that from 1978 to the end of 2013, only 24% of Fortune 500 companies offered any type of defined pension benefit plan. Corporations have substituted stock related 401K plans which are much less secure.

To add insult to injury, President Trump rolled back the Fiduciary rule as part of the 2010 Dodd-Frank bill where financial advisers were obligated to act solely in the best interests of consumers when managing their retirement accounts. Around February 3, 2017, he signed a memorandum to roll back President Obama’s fiduciary rule.

As per the January 26, 2015 American Progress report, “the data available on how American households build up financial assets and how they have done so over time show an American public that is struggling to prepare itself for retirement and that is becoming less well prepared over time. Three clear trends in particular illustrate to what extent Americans are under-prepared for retirement.”

A large percentage of Americans are saving nothing for retirement

According to a recently released household survey conducted by the Board of Governors of the Federal Reserve System, as of 2013, approximately 31 percent of Americans reported having zero retirement savings and lacking a defined-benefit, or DB, pension. This finding is in keeping with the results of other comprehensive Federal Reserve surveys and means that nearly one-third of people in the US currently have no money put away in any type of retirement account to supplement their Social Security benefits. Among respondents ages 55 to 64—those nearest to retirement who already should have built up significant savings—the share who reported having no savings or pension was still 19 percent, or approximately one out of every five near-retirement households.

“That such a large share of Americans lacks any savings should not be particularly surprising given that so many still lack access to the primary savings vehicles used by workers today: workplace retirement plans. As of 2014, only 65 percent of private-sector workers had access to a retirement plan through their jobs, and only 48 percent participated in one. Even when looking just at full-time workers, more than one-quarter still lacked access to an employer-sponsored retirement plan, and more than 40 percent did not participate in one. Moreover, these numbers have not been getting significantly better over time. In fact, studies that use data that allow for long-term analysis indicate that the share of private-sector workers with access to workplace plans is actually lower now than it was in the late 1980s.”

As per a Bloomberg 11/8/2014 report, Since 1978, college tuition and fees have increased by a whopping 1,120%. During that same period, the price of food has increased 244% and medical expenses 601%. In fact, tuition prices have gone up 4 times faster than the consumer price index. 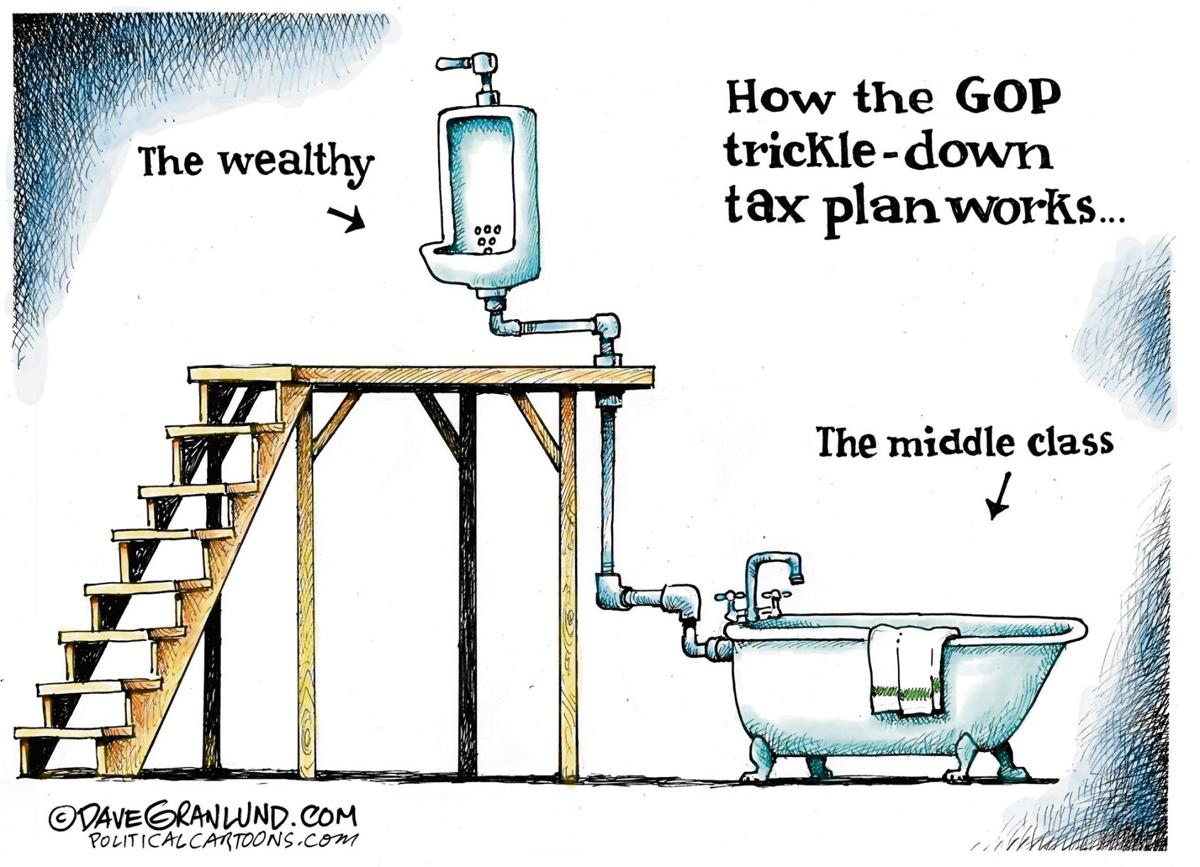 It is my opinion that “We the People” can thank the more conservative US Supreme Court for exacerbating the above described conditions with its 2010 decision, Citizens United v. FEC which allowed corporations to donate monies like an individual to political candidates and because of loopholes, these donors were allowed to give millions to politicians who championed their objectives, anonymously.

Dear Corporation Executives, How do you think voters will react when they finally figure out who has been the #1 catalyst for their stagnant wages as costs keep rising. Eventually, they will be pointing the finger at you. While they’ve watched you getting richer in every possible way with the 2017 GOP huge tax cuts bill as the cherry on top, they have seen how much of these corporate spoils have been garnered at their expense.

They will be voting for Democratic Party candidates for years to come.