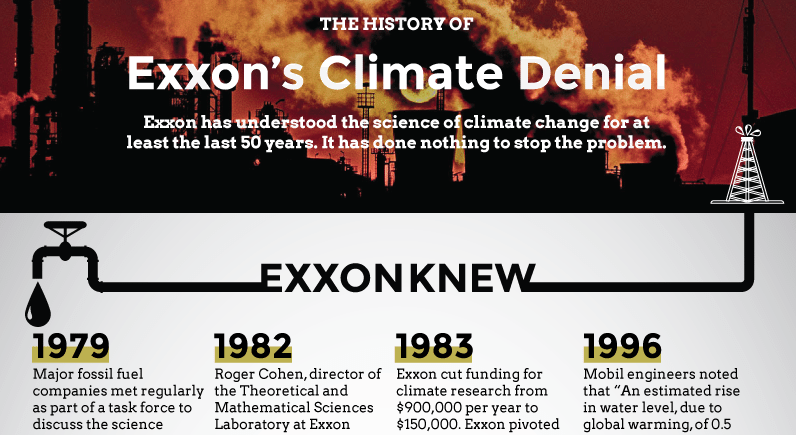 D-Day has come for the Exxon-Mobile executives to turn over to the courts, 40 years of any and all data pertaining to when they knew; what they knew and what was shared with the public about climate change issues pursuant to a 2016 lawsuit filed by the Massachusetts Attorney General. On January 7, 2019, the US Supreme Court refused to take up this case for review.

This means that the ruling by the lower courts forcing Exxon to produce all requested documents, will stand.

This exposure could help motivate corporations to become better citizens when it comes to helping the US address climate change in a more constructive way. On January 7, 2019, Brian Kahn of Earther.gizmodo.com penned the following report, “Exxon Is Finally Being Forced to Turn Over Docs Showing What It Knew About Climate Change”

“Exxon has run out of places to hide whether or not it misled the public on climate change. On Monday, the Supreme Court refused to take up a case filed by the oil giant attempting to stop a probe by Massachusetts’ attorney general. That means the company will have to turn over decades of documents that could provide damning evidence of how Exxon lied to the public and shareholders about climate change even as it learned more about the risks it posed to the planet and the company’s bottom line.” “The case has been ongoing since 2016. According to the state attorney general office, the “investigation seeks information regarding whether Exxon may have misled consumers and/or investors with respect to the impact of fossil fuels on climate change, and climate change-driven risks to Exxon’s business.” As part of the investigation, the state requested troves of documents tied to Exxon’s climate research and how it was planning for climate change internally.”

“Not surprisingly, Exxon hasn’t been too keen to release any of that information and has waged a nearly three year legal tug-of-war with Massachusetts. The company filed suit in state court in an effort to keep the documents under wraps. It lost at every turn in state courts so it took its case to the Supreme Court, arguing that it was a “nonresident corporation” and therefore didn’t have to turn over documents. But on Monday (1/7/19), the conservative-leaning court refused to take up the case. That effectively leaves Exxon with no recourse but to fork over the receipts.” 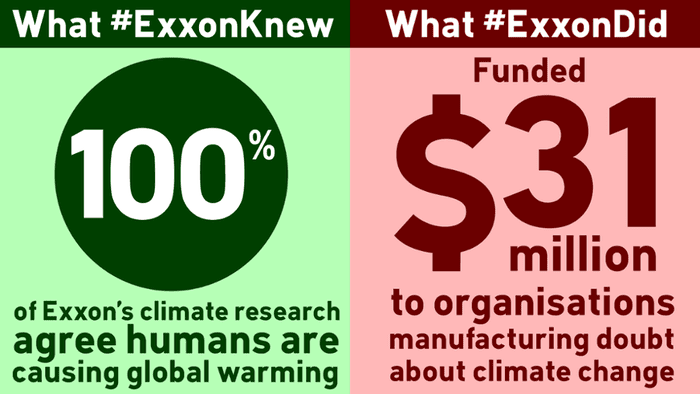 “Those receipts are likely to be very damning, and could pave the way for more lawsuits, (including) the slew of suits already filed by cities and counties against oil giants including Exxon. We already know Exxon knew quite a bit about climate change even as it continued to fund climate denial and downplay risks publicly, thanks to a bombshell investigation by InsideClimate News in 2015 that won a Pulitzer Prize. That series, in part, led to the state attorneys general lawsuits, which have continued to pile up (the latest was filed late last year by New York’s attorney general).”

“Meanwhile, InsideClimate News has continued to flourish. On Sunday, the nonprofit journalism outfit received a $1 million grant from the Golden Globes to continue its awesome work expanding local and high school climate journalism. All of this goes to show that while Big Oil still has immense power and resources, having the full truth come out about what companies like Exxon and other oil majors matters to the public.”

Link to report: Exxon Is Finally Being Forced to Turn Over Docs Showing What It Knew About Climate Change

See: Here’s what real science says about the role of CO2 as Earth’s/ Discover …